7 Faces of Dr. Lao: Things Are Not As They Seem

Director George Pal’s 7 Faces of Dr. Lao surprises on multiple levels: its witty screenplay by Twilight Zone writer Charles Beaumont, an odd assortment of well-defined characters, a bravura performance by Tony Randall, and some of the best special effects of that time.

In the film, a strange traveling magician drifts into a small western American town, announcing that he is bringing with him a “Magic Circus.” Calling himself Dr. Lao, the eccentric Chinese character places an ad in the local newspaper and makes friends with the editor.

But things are not as they seem. When the Magic Circus magically appears, Dr. Lao changes appearances and personalities, interfering in the lives of everyone in the community.

Love with the properly repressed widow

John Ericson plays the handsome newspaperman who rebels against the small town’s political status quo, while suffering in love for a sexually repressed widow (Barbara Eden) living with her precocious young son and mother-in-law. Outwardly, she resists the newspaperman’s advances; inwardly, she has intense hot flashes every time she thinks of him.

Later on, the widow enters the tent of “Pan, the God of Joy” at Dr. Lao’s circus. Initially, she is repelled by the mythical goat creature, but when he begins to play his “pipes of seduction,” he turns into a sexy, muscular, shirtless John Ericson. The sexual tension is palpable as the widow lustfully loosens the bodice of her blouse from the heat.

Another potent scene involves an aging, flirty, good-time-gal (poignantly played by veteran actress Lee Patrick), who goes into the tent of “Merlin, the Fortune Teller.” She is told that her future will be bleak, her investments will fail, she will never find a man, her life will be inconsequential and insignificant, and she will die a lonely spinster.

The former beauty refuses to believe it at first, but then falls apart before our very eyes as she dissolves into tears at her pathetic fate.

The psychological musings of 7 Faces of Dr. Lao do not always work, but there are some situations that do. Minerva Urecal plays a bitchy old harridan who is always carping to her meek and gentle Scandinavian husband, calling him an “idiot” and ordering him to “shut up!” She finds her transformation at the Magic Circus when she gazes into the eyes of Medusa, the snake-haired goddess. She turns to stone and then is reborn again as a happy and loving woman.

One by one, the townsfolk are shown their faults and errors; the film’s visual imagery of human destruction is in fact a bit disturbing. I kept telling myself that it was all padded footage in order for Pal to use clips from his earlier movie, Atlantis, The Lost Continent (1961).

Racial stereotyping can be expected when the main character is referred to as a “crazy little Chinaman.” There is also an American Indian assaulted by malevolent townsfolk, but Dr. Lao quickly comes to his rescue and neutralizes the bad guys. 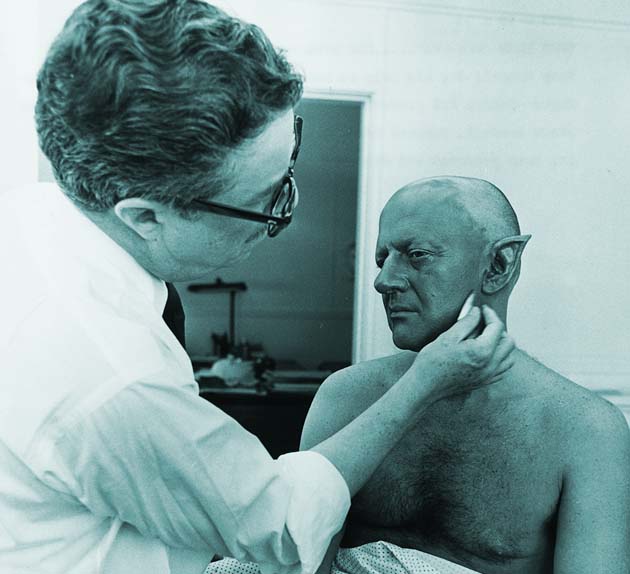 No description of 7 Faces of Dr. Lao can be made without commenting on the talents of Tony Randall. His portrayal of Dr. Lao and the film’s wide assortment of creatures and incarnations is something to marvel at. A performance like this would be a challenge for the most accomplished of actors, but Randall pulls each character off with a showy combination of wit and realism.

These cinematic manifestations were enabled by longtime make-up artist William Tuttle, who received that year’s Honorary Academy Award for his outstanding make-up achievement.

Admittedly, the tricks and illusions found in 7 Faces of Dr. Lao can be didactic, preachy, and even a bit condescending at times, but its whimsy and fantasy forgive all.

7 Faces of Dr. Lao cast info via the IMDb.

This is one of my very favorite fantasy films, along with Mary Poppins, which was made in the same year, and for which it competed at the Oscars.

The review above is mostly accurate, except for the description of the seen with actress Lee Patrick. It is not the tent of “Merlin The Magician” her character enters, but rather, that of Apollonius of Tyana. Appollonius, Merlin, Dr. Lao, and a series of others, were all played beautifully by Tony Randall.

I’d further note that the film’s special effects were not just superb for the time, but were, rather, excellent when compared to films of all times. The patent miniature work seen in many George Pal productions shine here, as does, of course, the brilliant makeup artistry of William Tuttle (who won the Oscar here for his efforts).

I, too, give the film a five out of five stars rating.