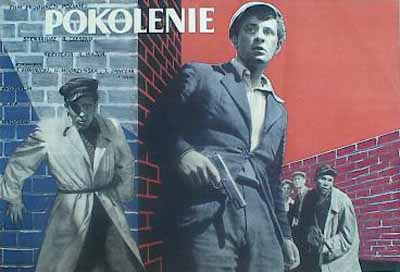 Sometimes films get reputations way out of proportion with their artistic merit simply because they expound a point of view with which the public and/or the critics agree. Such is the case with the first feature by Polish film legend Andrzej Wajda. Released in 1955, the 87-minute black-and-white Pokolenie / A Generation is not a particularly good film. No, it’s not a bad film, either, but it visually resembles a mediocre 1940s film noir admixed with a touch of Italian Neo-Realism through its blighted and impoverished landscapes. As for the film’s characters, they are unrealistic one-dimensional tools for the agitprop that is at the heart of A Generation.

True, one must realize that A Generation needed to be green-lighted by Polish censors. But unlike what would later be accomplished by a more mature Wajda, and by filmmakers such as Roman Polanski (who has a small role in the film) and Krzysztof Kieslowski, A Generation plays out more like a Primer for Communism. It became part of a War Trilogy about Poland’s World War II Experience, and it is thus packaged by The Criterion Collection – along with Kanal and Ashes and Diamonds. Hopefully, the two later films provide more true cinema to be savored.

Besides being no great success from a technical standpoint – the attempts to show gunfire are especially lame (even when one considers they used real bullets for those scenes) – A Generation suffers from Bohdan Czeszko’s appallingly pedestrian screenplay (from his own novel), while the non-professionals in the cast are not up to the task. In fact, a director can get away with non-professionals only in certain roles, especially if the tyro is surrounded by pros and the character is not asked to do much, but in ensemble pieces like this to go amateur it to beg for a mercy killing.

A synopsis of the film’s plotline would read like this:

1943. In Nazi-occupied Poland, the Communists were bravely organizing resistance and setting the stage for the country’s liberation. (Though what followed for the next five or so decades – about ten times longer than the Nazi occupation – could hardly be called freedom.) They also fought the good fight for the Jews during the Warsaw Uprising. (In reality, no one but the Jews stood up for the Jews.) And the Communists were also prone to soliloquizing on the raptures of equality for all – and it was especially effective when the local shill for the Party was a sexy blonde.

This last fact may or may not be true, but most of A Generation is such blatant agitprop that the only saving grace for the film would be if there were enough action or depth to counterbalance the propagandizing. There is not.

A Generation follows an anomic wannabe criminal and/or apprentice at a factory named Stach Mazur (Tadeusz Lomnicki), who lives in the suburban slums of Warsaw, and putatively narrates the film. He is the typical disaffected youth who becomes enamored of Communist principles after getting a hard-on when he spies the aforementioned sexy blonde proselytizing at the local school. While trying to steal coal from a passing Nazi train, he is wounded and a friend is shot dead (through some very unconvincing special effects).

Stach escapes into the sewers where he meets the man who will shepherd him first to the factory and then into the Party. This is the somewhat mysterious Sekula (Janusz Paluszkiewicz, who may have been the only professional actor in the cast, for his performance towers above the rest, even if it is nothing for the history books).

The beautiful blonde Resistance fighter is called Dorota (Urszula Modrzynska) – though her real name is Eve; that’s a tactic that protects the Resistance fighters from ever knowing too much if caught. She gives Stach the name Bartek, and the inevitable happens. They fall in love. He later gets involved in some intrigue that ends with some Nazis being killed, and he gets hunted down, along with his Resistance Fighter pals.

One of those – Jasio Krone (Tadeusz Janczar), a reluctant joiner of the Party – is killed, but Stach survives, only to find that the Gestapo has captured Dorota at her apartment. Stach can do nothing as they haul her away to execution. The film ends, however, with Stach being queried by password (‘Do you sell down feathers?’) by an even younger wannabe Resistance Fighter for the Party. Despite his grief, Stach goes on, and embraces the younger children and rebels he will lead into the glorious Red future – which in many ways was as bad as what the Nazis provided.

Neither Modrzynska nor Lomnicki, as the two idealistic lovers, provides any real sparks, although Modrzynska could have become a film starlet in America. Janczar’s Jasio, however, is a far more rich and ambiguous character than the two leads. He is the closest to a James Dean character in the film – a young man who feels disgusted after killing a Nazi, and loathes both the Nazis and Communists equally. (Janczar went on to appear in the later two films in the trilogy.)

Of course, since A Generation was pure propaganda, Jasio must die for disbelieving in the virtues of the Party. Thankfully, he dies a spectacular death, chased up a tenement, and then swan diving down several flights of spiral stairs to his death. (I wonder if Alfred Hitchcock watched this scene and copied it in Vertigo.) Of course, like much in the film – from the pro-Commie speechifying (where those who advocate real democracy are seen as worse than the Nazis) to the heavy-handed symbolism – the death scene is meant to show Jasio in the role of Poland, or more accurately, its youthful generation, with nowhere to turn and giving up the ghost.

Jerzy Lipman’s cinematography is solid but unspectacular, and the score is not even up to Hollywood B-melodrama standards. Often, mediocre films like A Generation are defended by acolytes on grounds that its visuals are ‘pure cinema,’ or some such. Well, in this case they are not, but even if the mise-en-scène looked great, it would not make up for the leaden acting, the dull script, and the agitprop galore. Given that an average feature film will have dozens to hundreds of framed shots, both the laws of average and random chance will demand that a few will be well-composed. So? A Generation has few well-shot scenes, and those are hardly what could be called striking.

Similarly, even though one could argue that the Marxist references in the film were intended as a sly critique of the system, none of that matters now; it all looks as blatant propaganda. Great art rises above such strictures (including the idiocies of would-be censors). Minor anachronisms – such as a racist caricature of a black man on a cuckoo clock – are not as egregious, since it is emblematic of the times and its attitudes.

The DVD features are sparse. There is no audio commentary, no trailer, and just a meager insert essay on the film provided by film scholar Ewa Mazierska. There are some publicity stills on the disc, and two real extras. One is Wajda’s first documentary film short, Ceramika Ilzecka / Ceramics from Ilza (1951), and a 34-minute interview with director and film critic Jerzy Plazewski called “Andrzej Wajda: On Becoming a Filmmaker.” It’s informative, but rather rote.

Overall, A Generation does show some promise, especially in the Jasio Krone character, and a few scenes of realistic interplay. These, however, are few. Wajda may have gone on to become a great filmmaker, but that grace is not evident here. Perhaps that is a legacy of art created in totalitarian states, whether inside or outside a celluloid frame.

Alfred Hitchcock Movies: ‘I Confess’ & ‘Strangers on a Train’

I think you make some valid points, but you should stick to writing what you seem to know about, which is cinema history, not Polish history. Writing that “in reality, no one but the Jews stood up for the Jews” is an incredibly disrespectful, inaccurate, and irresponsible statement. It completely disregards the sacrifices of many Polish Underground soldiers, who did in fact cooperate with the Jewish resistance in the Warsaw Ghetto, not to mention the sacrifices of people like Irena Sendler. If you’re unfamiliar with her (which I assume you are, considering the comment you made), she was a Catholic woman who smuggled at least 2,500 Jewish children out of the Warsaw Ghetto and was brutally tortured and crippled for her efforts. Those children survived, and she saved more Jews in total than any other individual during the Holocaust. If you plan on writing swooping generalized statements on historical events that have vast significance for so many people, and accompany so many traumatic memories, please support them with actual facts, or better yet, just don’t write about them at all. You are obviously not a Polish historian, and making unjustified, subjective, “historical” statements only serves to hurt or offend others and detracts from the academic integrity of your work,

One other issue I have with this article is that you refer to Dorota as simply a “sexy blonde” numerous times, objectifying her in a way that is not consistent with the tone of the film or Wajda’s portrayal of the character. It robs her of her agency as a leader, as if her only purpose in the film is to act as eye candy, and that just by virtue of being a woman her resistance is less significant than the resistance of her male counterparts.