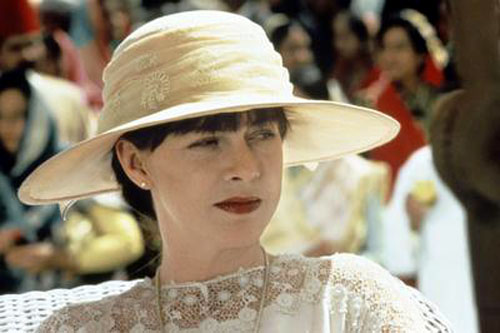 A Passage to India with Judy Davis.

During their stay, a local Muslim physician, Dr. Aziz (Victor Banerjee), befriends the two women. All goes well until something strange happens in the dark and foreboding Marabar Caves. A distraught Miss Quested then accuses Dr. Aziz of having attempted to rape her. A trial ensues. [Note: Spoilers ahead.]

A Passage to India‘s Marabar Caves don’t exist; they were inspired by the Barabar Caves located in northwestern India. David Lean’s film, however, was shot near Bangalore, in southern India. That’s where the Marabar Caves were “constructed” for the production.

A Passage to India is a solid, well-directed and mostly well-acted intimate epic, but one that only partially succeeds in its depiction of the relationship between the Twain, which not only did meet but got stuck in a loveless marriage for a very long time.

Passage To India for me personally is an important book . it was just pure chance that when I went to pay my bill at the Bangalore club I happened to see David Lean , Miss Davis Peggy Ashcroft and chatted with sound recordist who talked about the painting in the Club of an Englishman !! What he said I will not disclose.
David Lean was also married to an Indian lady ,
What struck me was Leans good looks , very relaxed stance and continuity problem created by Horse`s dung !!, Very tired bored cast , all waiting for the right light.. make up and costume . were excellent all looking their part.. Little did I know that Sir David Lean had directed Brief Encounter. , A true perfectionist,

Spot-on review. It’s been a while since I’ve seen the movie, and I don’t know that I remember Guinness’ performance as fondly as you describe, but I’m open to updating my opinion. Dame Ashcroft, sublime, Judy Davis, without peers.

Hey Louis,
I believe many critics didn’t like Alec Guinness in “A Passage to India.”
Now, I’m not sure if that was because they found him miscast or if they found the casting of a British actor as an Indian man unacceptable — no matter how convincing Guinness’ performance.
But I believe “A Passage to India” would be worth revisiting. I liked it much, much better the second time around.

I have to write because I found Maurice Jarre’s music superb and I don’t see why it is considered inappropriate.. I loved the music - the sweeping notes portray the magesty of the country, the caves, river, even the railway. To me, the music lifts you along with the majesty of the film. Just my own opinion. You have read the book, I presume. We had to study it in school. Also, why does one have to refer to “gay” or “happy” directors - a good job well done deserves praise…

Thanks for writing, Jennifer.
Please note: David Lean was NOT gay. I was making fun of those who apply their simplistic theories to filmmakers with a good eye for art direction, costumes, etc.
Addendum: That section of the post has been deleted to avoid any further confusion.