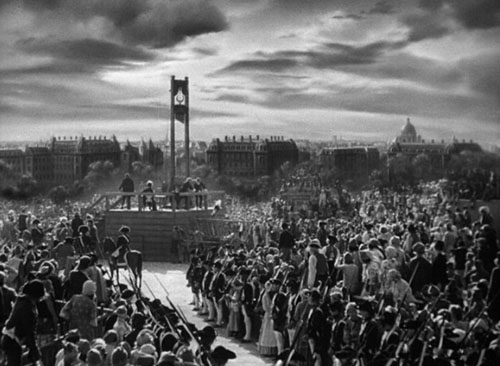 A Tale of Two Cities movie.

Although not as widely known as other Old Hollywood spectacles, David O. Selznick’s film production of Charles Dickens’ A Tale of Two Cities, set during the time of the French Revolution, is far, far better than most of the other period dramas made during the studio era.

Starring former silent-screen heartthrob Ronald Colman; featuring respected supporting players such as Edna May Oliver, H.B. Warner, and Basil Rathbone; directed by MGM’s reliable and unfairly forgotten Jack Conway, by then a two-decade film veteran among whose credits were the saucy Jean Harlow vehicle Red-Headed Woman and Lon Chaney’s only talkie, The Unholy Three; and with a literate screenplay credited to W.P. Lipscomb (Les Misérables, Clive of India) and S.N. Behrman (Queen Christina, Anna Karenina), A Tale of Two Cities was one of the most important productions of the mid-1930s.

But even though Selznick’s finesse can be felt throughout, what makes A Tale of Two Cities so remarkable is not the fine period detail or the MGM gloss. Indeed, what gives the film its soul is Ronald Colman’s superb star turn as the jaded barrister Sidney Carton, who ends up holding his love – for a woman he can’t have – above life itself.

Though less well-remembered than, say, James Stewart or Humphrey Bogart, Colman was a far, far better actor than either Stewart or Bogart – and most of their contemporaries, for that matter. Colman’s self-sacrificing Carton is a masterful performance to match his equally flawless work in Frank Capra’s Lost Horizon (1937), Mervyn LeRoy’s Random Harvest (1942), George Stevens’ The Talk of the Town (1942), and his Oscar-winning tour de force in George Cukor’s A Double Life (1947).

As Sidney Carton’s elusive love interest, minor leading lady Elizabeth Allan was far, far more beautiful than most of the bigger film stars of the period, while at the other end of the spectrum veteran stage performer Lucille La Verne comes across as the filthiest, nastiest, most gargoylish hag I’ve ever seen on screen.

With the best of times and the worst of times – good and evil, beauty and vileness, passionate love and mad hate, life and death – coexisting on film, as in life, A Tale of Two Cities is quite likely the crowning achievement of Jack Conway’s long career, while standing up perfectly well next to Selznick’s best output of the era.

I think we are way overdue for another film production of A Tale of Two Cities. The last that I’m aware of is the 1980 production starring Chris Sarandon, which wasn’t so great in my opinion. A good and solid performance, in period movie style, of the extraordinary Sidney Carton would surely be welcomed.