Actor Abe Vigoda, little-known internationally despite a supporting role in The Godfather, but popular in the U.S. as a result of the 1970s television series Barney Miller and of an erroneous 1982 People magazine obit, died in his sleep at his daughter’s home in Woodland Park, New Jersey, on Tuesday, Jan. 26, ’15. The cause of death seems to have been old age. Vigoda (born on Feb. 24, 1921, in New York City) was 94.

Following a long stint on the stage – on Broadway (The Man in the Glass Booth, Marat/Sade) and elsewhere – Vigoda landed the role of Don Corleone (Marlon Brando) ally-turned-traitor Salvatore Tessio in Francis Ford Coppola’s multiple Oscar-winning 1972 adaptation of Mario Puzo’s bestseller The Godfather.

“I’m really not a Mafia person,” Vigoda would tell Vanity Fair in 2009. “I’m an actor who spent his life in the theater. But Francis said, ‘I want to look at the Mafia not as thugs and gangsters but like royalty in Rome.’ And he saw something in me that fit Tessio as one would look at the classics in Rome.”

The Godfather was shortlisted for four Academy Awards in the acting categories, but Vigoda was bypassed: Brando won – and turned down – the Best Actor Oscar; Al Pacino (actually the film’s lead), James Caan, and Robert Duvall were nominated in the Best Supporting Actor category. (The supporting trio lost to Joel Grey in Bob Fosse’s Cabaret.)

Starring Hal Linden in the title role, during its first two seasons (1975-77) Barney Miller featured Abe Vigoda as Detective Phil Fish, along the way earning him three consecutive Emmy nominations (1976–78) in the Best Supporting Actor in a Comedy or Drama Series category. At the beginning of the show’s third season, Vigoda moved on to a spin-off series of his own, Fish, which lasted only 35 episodes (1977–78).

Additionally, Vigoda was seen in more than 50 television productions, among them Mannix, Toma, the TV movie How to Pick Up Girls! (1978), the daytime soap opera As the World Turns, and Law & Order. More recently, his voice was featured in the animated series High School USA!. 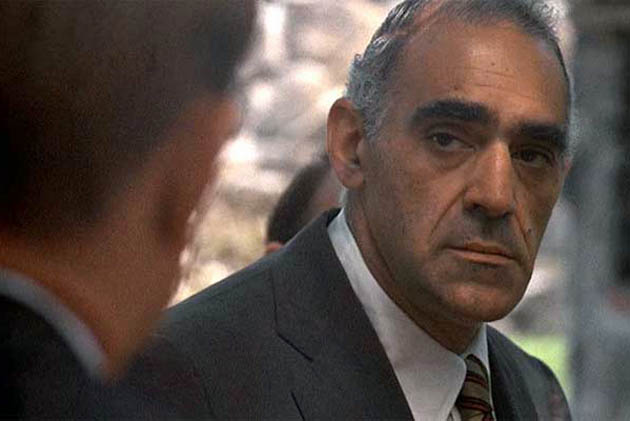 The Godfather actor Abe Vigoda (as Sal Tessio): ‘Tell Mike it was only business, I always liked him.’

In 1982, People magazine reported that Abe Vigoda had died. The actor made sure everyone knew that was not the case by placing an ad in Variety in which he was seen sitting up in a coffin while holding a copy of People.

Perhaps that should have led to his becoming the Vincent Price of the ’80s, starring in remakes of The Pit and the Pendulum and The Premature Burial, and/or in a Boris Karloff biopic. Instead, Vigoda became a pop celebrity in the U.S., leading to talk show guest appearances, countless D.O.A. jokes, and a Beastie Boys mention in their 1986 album “Licensed to Ill.”

Vigoda, of course, was hardly the only victim of Early Obituary Syndrome. Others such – minus the Variety ads and talk show appearances, perhaps – include The Old Dark House and Titanic actress Gloria Stuart; Charlie’s Angels’ Jaclyn Smith; late silent era actress Eva von Berne (about seven decades prior to her actual death); and authors Gabriel García Márquez and Ernest Hemingway.

Mel Gibson Is Back & So Is Controversy, ‘Hugh Hefner’ Documentary Sold