The Academy Awards’ Best Foreign Language Film category is one of the most difficult to predict, chiefly because a much smaller (and, based on anecdotal evidence, older) segment of Academy of Motion Picture Arts and Sciences voters get to watch the potential contenders – for the most part movies yet to be released in the United States. For that reason, major surprises are commonplace. After all, what’s well-regarded around the world may not be all that well-regarded among 85-year-old Beverly Hills residents. And for that reason, no one should be surprised that a trio of 2007 favorites – the abortion movie, the Iranian Revolution movie, and the ghostly children movie – are all already out of the running.

Nowhere to be found on the Academy Awards’ list of nine Best Foreign Language Film semifinalists (see list further below) are the following:

More specifically, Johnson was calling attention to the current two-phase Best Foreign Language Film nominating process (see further below) – which, ironically, has made the votes in this category even less representative of the Academy as a whole, as only about 30 of its nearly 6,000 members end up choosing the eventual nominees.

“Asked if further retooling (including the possible involvement of more active Academy members earlier in the nominating process) may lie in the future, Johnson was unambiguous,” Foundas writes. “’That’s what has to be done, because in my mind it can’t continue like this,’ he said. ‘I don’t believe these choices reflect the Academy at large.'”

In case Mark Johnson was talking about this year’s semifinalists – if Mungiu’s abortion movie had been allowed in, one of the Oscar-friendlier movies below would have been left out – among the choices that may not reflect the Academy at large are the following, in alphabetical order by country (and with a brief synopsis). 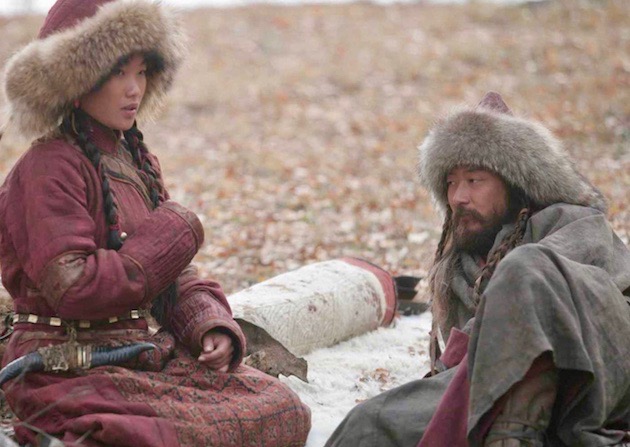 Mongol with Tadanobu Asano and Khulan Chuluun. How can a country get more than one Best Foreign Language Film nomination in the same year? Easy. Just have mostly local co-productions submitted by more than one country. For instance, Costa-Gavras’ mostly French Z (1969) winning as an Algerian entry and Jean-Jacques Annaud’s mostly French Black and White in Color (1976) winning as an Ivory Coast entry. Their official French competitors were Eric Rohmer’s My Night at Maud’s and Jean-Charles Tacchella’s Cousin Cousine, respectively. This year, Russia may end up with two nominees: Nikita Mikhalkov’s 12 and Sergei Bodrov’s Kazakh entry Mongol.

How Kazakh is ‘Mongol’?

In addition to the mind-boggling omission of Cristian Mungiu’s abortion movie from the list of Best Foreign Language Film Oscar semifinalists, there was one perhaps even more mind-boggling inclusion: Sergei Bodrov’s Mongol.

Is the movie that bad?

No, this has nothing to do with Mongol‘s merits or lack thereof. The issue here is that Bodrov’s epic tracing the early life of Genghis Khan is listed as a Kazakhstan entry.

So, how Kazakh is Mongol?

For starters, this mostly Russian-German co-production (with some Kazakh participation) was mostly shot in China and features dialogue in Mongolian and Mandarin.

What about the in-front-of-the-camera talent?

Admittedly, some of Mongol‘s supporting cast may hail from Kazakhstan. Or at the very least may have spent summers there.

Of note, late last year the Academy disqualified Taiwan’s entry Lust Caution because Ang Lee was the only Taiwanese national with a key role in the production of the Golden Lion-winning period political drama.

And back in early 1993, Adolfo Aristarain’s A Place in the World was actually disqualified after being nominated, as the Uruguayan entry turned out to be very much Argentinean.

As was the case last year, the 2008 Best Foreign Language Film nominations are being determined in two phases. (Not that this will in any way help Mungiu’s Oscar-unfriendly abortion movie.)

According to the Academy’s press release, the Phase I committee, “consisting of several hundred Los Angeles-based members,” screened 63 eligible non-English-language films. Their votes narrowed down the field to the nine movies listed above.

Left unsaid in the release is that those “several hundred” members don’t have to view all 63 potential Academy Award contenders. They only need to watch a certain percentage of the 20–30 films assigned to their particular screening group.

The Phase II committee is made up of ten randomly selected members from the Los Angeles-based Phase I group, joined by ten New York City and L.A.-based members invited just for the occasion. These 30 members will watch the nine semifinalists and then select the five nominees.

This year’s Phase II screenings will take place from Friday, Jan. 18, through Sunday, Jan. 20, in both Hollywood and New York City.

Nominations for the 2008 Academy Awards will be announced on Jan. 22 at the Academy’s Samuel Goldwyn Theater in Beverly Hills. Unless the Writers Guild strike derails things (see Golden Globes 2008), the Academy Awards ceremony will be held on Sunday, Feb. 24, at the Kodak Theatre at Hollywood & Highland Center in Los Angeles.

Note: Since 4 Months 3 Weeks and 2 Days opened in the Los Angeles area last Dec. 21, Mungiu’s abortion movie is eligible in the Academy Awards’ other categories, including Best Picture and Best Director.

I Think I Love My Wife: Insufferable Chris Rock Comedy

‘Shall We Kiss?’ Q&A with Director Emmanuel Mouret

It is not fair what is happening. We should boycott The OSCARS. It didn’t happen only this year, but in previous years aswell. In this case i wonder exactly how reliable the winnings are.

One correction - in Romanian the word “bârfa” means “gossip”. “Scandal” would be simply “scandal”, just like in English.