Despite countless stories to the contrary, numerous silent film performers managed to survive the coming of sound. Yet Adolphe Menjou, the embodiment of Hollywood’s low-grade urbanity and worldliness, is a special case in that he not only remained a forty-something leading man in the early sound era (The Front Page, The Great Lover) but also smoothly made the transition to top supporting player in mid-decade, a position he would hold for the next quarter of a century.

Menjou is Turner Classic Movies’ Star of the Day today, Aug. 3, as part of TCM’s 2015 “Summer Under the Stars” series.

‘A Star Is Born’: Unoriginal original

Right now, TCM is showing William A. Wellman’s A Star Is Born (1937), the “original” version of the story about a small-town girl (Janet Gaynor) who becomes a Hollywood star, while her celebrity husband (Fredric March) boozes his way into oblivion.

In typical Hollywood originality (not that things are any different elsewhere), this Technicolor melodrama produced by a pre-Gone with the Wind David O. Selznick is actually a shameless rip-off of George Cukor’s What Price Hollywood? (1932) – for which Selznick received credit as executive producer.

Based on story (or original screenplay) by columnist Adela Rogers St. Johns, What Price Hollywood? stars Constance Bennett in the Gaynor role and Lowell Sherman as the alcoholic filmmaker whose career goes on a downward spiral. 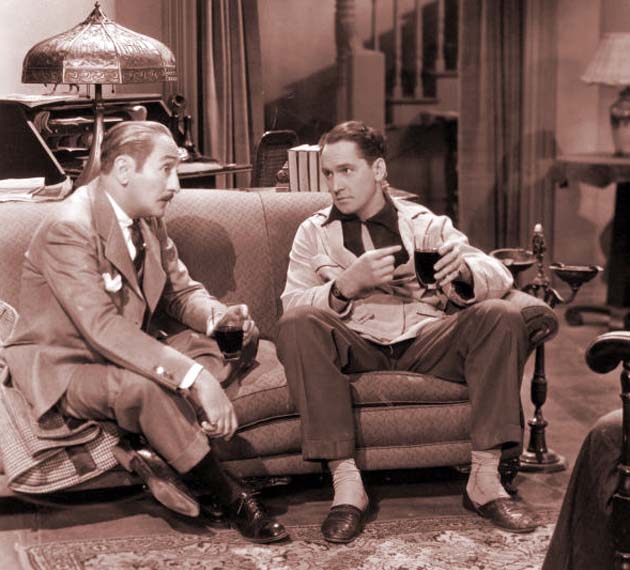 Adolphe Menjou in ‘A Star Is Born,’ with Fredric March: ‘Original’ remake.

In the 1937 version, Adolphe Menjou plays an idealized film producer: classy, professional, kind-hearted, and the exact opposite of most movie producers in Hollywood or anywhere else, then or now. (Check out the various ‘A Star Is Born’ inspirations.)

As an aside, two other official A Star Is Born remakes would follow:

And among the many variations of the tale is Jon Avnet’s Up Close & Personal (1998), set in the world of television news, and starring Michelle Pfeiffer and Robert Redford.

Next on TCM is an RKO B movie, Jack Hively’s Father Takes a Wife (1941), with Adolphe Menjou as the top-billed leading man to none other than Gloria Swanson – the epitome of Hollywood stardom back in the days when Menjou was a mere “leading man” (name below the title).

Like Menjou, Swanson survived the coming of sound. However, times were rough during the Great Depression, as countless movie careers floundered in the early 1930s.

Unlike Menjou, instead of making the transition from lead to top supporting player, the former Paramount star chose to quit Hollywood following Joe May’s flop musical comedy Music Is in the Air (1934).

Then came the unexpected RKO offer: $35,000. As Swanson would later recall, “a comedown as well as a comeback, I said to myself, but I accepted the offer, which was exactly $35,000 more than any other studio had offered in seven years.”

By then in her early 40s – but looking quite a bit older despite René Hubert’s outrageous costumes – Swanson, who could be funny, is mostly wasted in this uninspired marital comedy in which a shipping magnate (Menjou) marries a stage star, who, during their honeymoon, decides to take a singing stowaway (Desi Arnaz) under her wing.

Much could have been made out of the situation, but both Jack Hively’s direction and Herbert and Dorothy Fields’ screenplay are equally pedestrian. The acting isn’t much better; Gloria Swanson hams it up, Desi Arnaz’s naiveté comes across as insincere, while Adolphe Menjou, as usual, is overbearing in a role better suited for someone like William Powell or Warren William. The film’s one bright spot is scene-stealer Helen Broderick, who makes the best of her lines.

Following this critical and box office flop, another nine years would pass before Gloria Swanson would make another brief – but infinitely more memorable – comeback, this time around in Billy Wilder’s masterpiece Sunset Blvd.

Adolphe Menjou funny for once

Busby Berkeley’s Gold Diggers of 1935 is best known for the “Lullaby of Broadway” musical number. Featuring Wini Shaw, it’s a spectacular showstopper – about as long and as elaborate as a short film – that remains the highlight not only of the movie itself, but perhaps also of that era’s Warner Bros. musicals. And, gasp!, for once, Adolphe Menjou is kinda fun to watch, playing a borderline demented Russian dance director.

Besides Menjou, Gold Diggers of 1935 stars Warners’ perennial juvenile Dick Powell, while Gloria Stuart – more than six decades before surviving James Cameron’s Titanic – is the pretty, blonde leading lady. Alice Brady and Glenda Farrell are, as usual, the scene stealers; when they’re on screen, everybody else disappears. 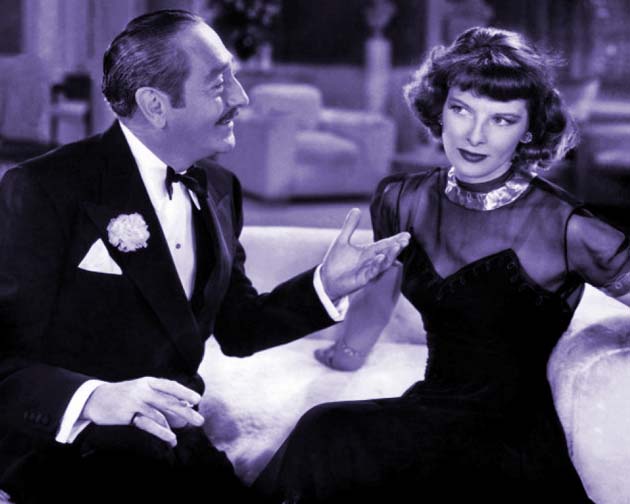 Adolphe Menjou in ‘Stage Door,’ with Katharine Hepburn. The right-wing Menjou would clash with her a decade later, during the making of Frank Capra’s political drama ‘State of the Union.’

Oscar-nominated director Gregory La Cava’s Stage Door (1937) has been referred to as the first movie featuring overlapping dialogue: its many aspiring stage actresses all cackle at the same time. But however dubious this sort of history, Stage Door is an interesting – even if bowdlerized – version of Edna Ferber and George S. Kaufman’s hit (anti-Hollywood) Broadway play.

Ah, Adolphe Menjou can also be seen in Stage Door, as ineffectual as a classy theatrical producer as he is as a classy movie producer in A Star Is Born that same year.

Morrie Ryskind and Anthony Veiller were credited for transferring Stage Door to the big screen.

Directed by the largely – and unfairly – forgotten Jack Conway, The Hucksters (1947) is one of the first major socially conscious Hollywood movies to truly attempt to reach an adult audience. Most pre-World War II movies, even if they tackled “adult subjects” tended either to take the soap opera route – women represented a large chunk of the moviegoing public back then – or to infantilize complex issues so moviegoers who stopped maturing at age 12 could enjoy the story and provide good word of mouth.

The Hucksters, on the other hand, not only delves into a serious subject matter – truth (or lack thereof) in advertising and in the business world in general – but does so in a way that doesn’t insult the intellect of those who have succeeded in leaving their pre-adolescence behind.

Now, is the film successful? Well, yes and no. The performances are a mixed bag, while this MGM release, however adult-minded, still had to make populist, commercial concessions. And really, in that regard, not much has changed when it comes to “adult” Hollywood movies.

Below: Adolphe Menjou at a House Un-American Activities Committee (HUAC) hearing in 1947, the year ‘The Hucksters’ came out.

Anthony Mann’s The Tall Target (1951) has a curious theme: Dick Powell – no longer the youthful, saccharine crooner of Gold Diggers of 1935 – plays a detective out to prevent the assassination of Abraham Lincoln while on a train ride. The gorgeous Paula Raymond is Powell’s leading lady.

New Moon (1930), in which a Russian lieutenant falls head over boots for a princess, has the same title and just about nothing else in common with the Jeanette MacDonald-Nelson Eddy operetta released a decade later. Metropolitan stars Lawrence Tibbett and Grace Moore bombed in this costly MGM production ($782,000 budget, or about $11 million today), the sort of all-talking, all-singing, all-mind-numbing fare that (temporarily) killed musicals shortly after the dawn of the sound era.

Despite a Best Actor Academy Award nomination for The Rogue Song (1930), Lawrence Tibbett would never find success in movies. Grace Moore, on the other hand, would make a major – albeit brief – comeback at Columbia, as the Best Actress Academy Award nominee of the box office hit One Night of Love (1934).

Gloria Swanson quote via her autobiography Swanson on Swanson.

New Moon (1930) budget via the Eddie Mannix Ledger found at the Academy of Motion Picture Arts and Sciences.

Adolphe Menjou portrait by Edward Teichen via The Red List.

Image of Katharine Hepburn and Adolphe Menjou in Stage Door: RKO, via The Red List.

Image of Fredric March and Adolphe Menjou in A Star Is Born: Selznick / United Artists.

When certain Menjou movies come on, a handful of guys hanging out at the local cigar shop make it a point to watch them. Adolphe Menjou is the best dressed man we’ve ever seen. His suits are impeccably tailored as are his vests and tuxedos. Who on earth was making clothes that looked so good in the 30’s. When he gets out of bed and has a folded hanky in his silk pajamas, this is sartorial splendor at it’s zenith.