Songwriters Alan and Marilyn Bergman, among whose compositions are “The Way We Were” and the song score for Yentl, will be the recipients of an Academy of Motion Picture Arts and Sciences tribute on Friday, May 29, at 8 p.m. at the Samuel Goldwyn Theater in Beverly Hills.

The evening will be hosted by music producer and composer Quincy Jones, and will feature film clips, personal remembrances from the Bergmans’ colleagues and friends, and live performances of several Oscar-nominated songs. In addition to the honorees, special guests include Dave Grusin, James Newton Howard and Michel Legrand. 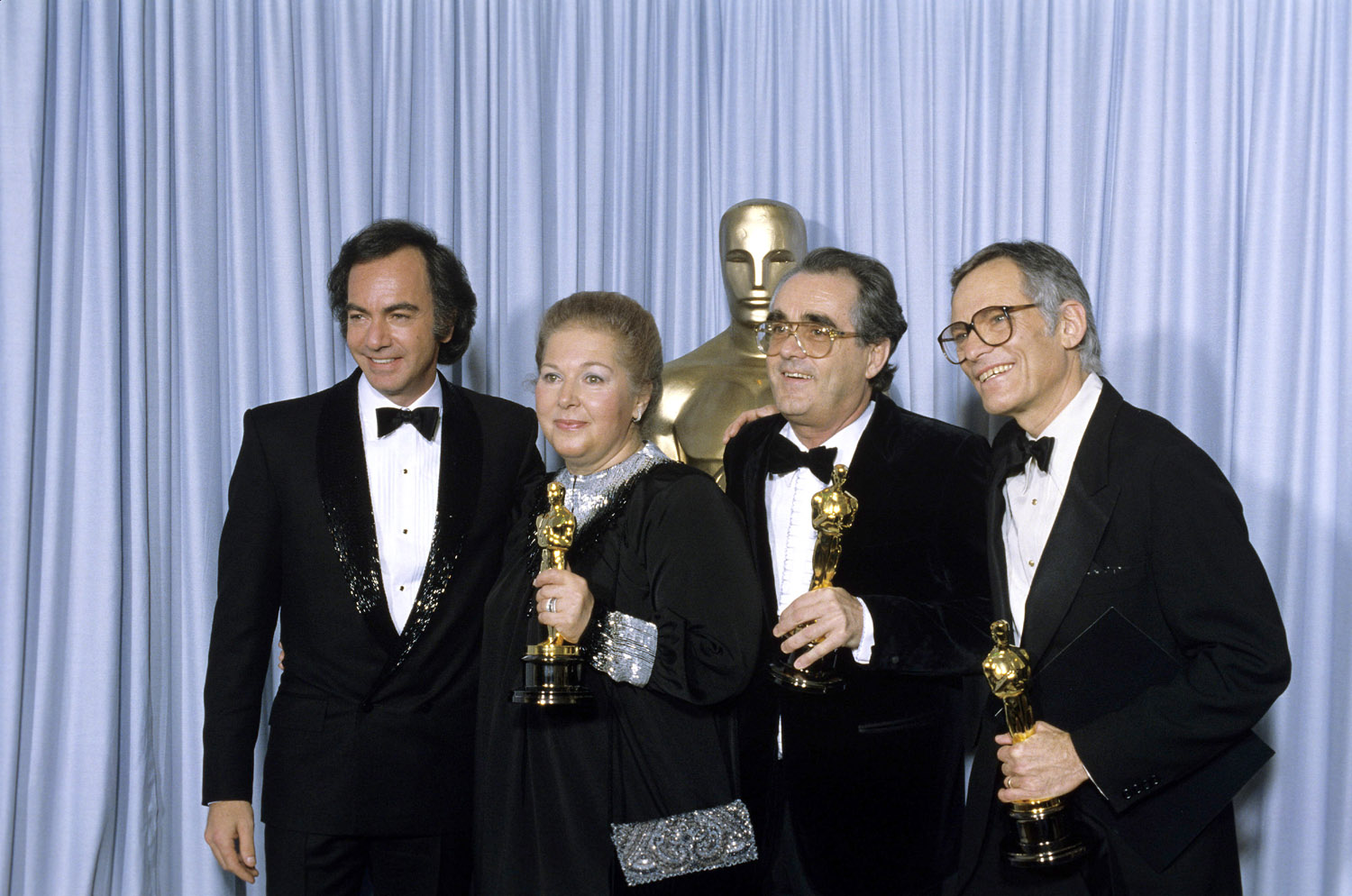 The former Marilyn Keith (born in New York City in Nov. 1929) met Alan Bergman (born in Brooklyn in Sept. 1925) more than fifty years ago. Their professional partnership has resulted in hundreds of songs for film, television, theater, recordings and concert performances, in addition to 16 Oscar nominations and three awards: for “The Windmills of Your Mind” from The Thomas Crown Affair (1968), “The Way We Were” from The Way We Were (1973), and the song score for Yentl (1983, above with Neil Diamond and Michel Legrand). 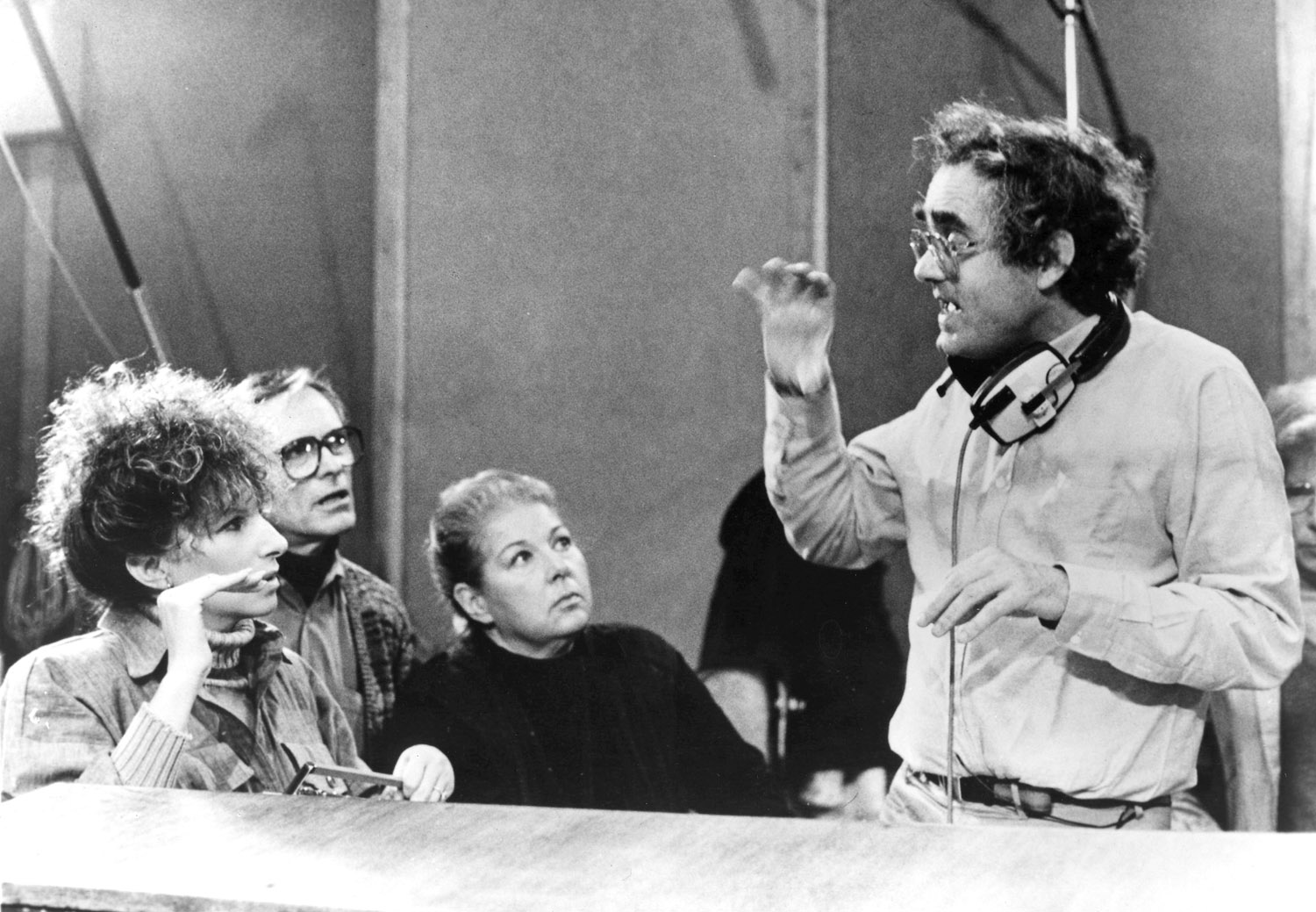 Among their past musical collaborators are the aforementioned Grusin, Howard, Jones, and Legrand, plus Cy Coleman, Marvin Hamlisch, Henry Mancini, Johnny Mandel and John Williams, while the Bergmans’ songs have been performed on film by the likes of Barbra Streisand, Ray Charles and Luciano Pavarotti.

In 1982 the Bergmans became the first lyricists to be nominated for three of the year’s five Academy Award-nominated songs: “How Do You Keep the Music Playing?” (Best Friends), “If We Were in Love” (Yes, Giorgio) and “It Might Be You” (Tootsie). The following year they again received three nominations – two for songs and one for the score of Yentl.

Tickets for “A Tribute to Alan and Marilyn Bergman” are $5 for the general public and $3 for Academy members and students with a valid ID. The Samuel Goldwyn Theater is located at 8949 Wilshire Boulevard in Beverly Hills. For more information, call (310) 247-3600 or visit www.oscars.org. 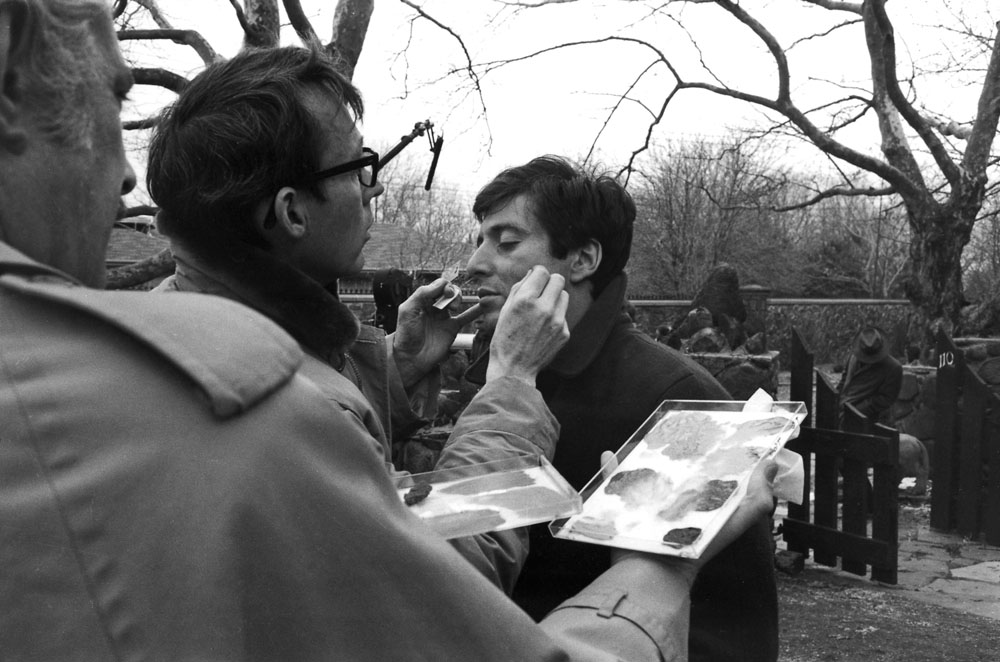 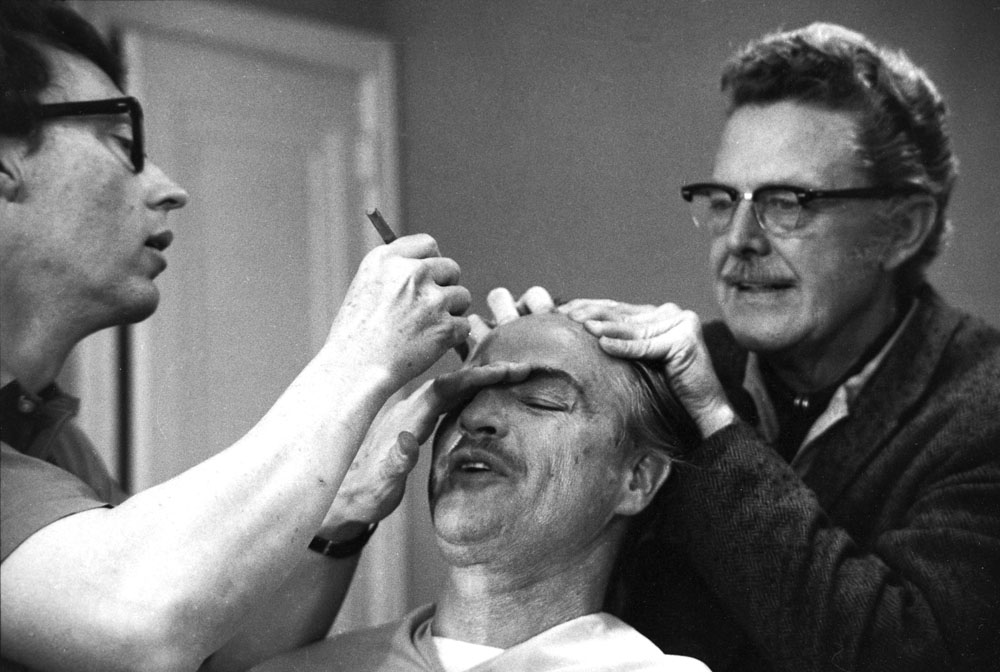 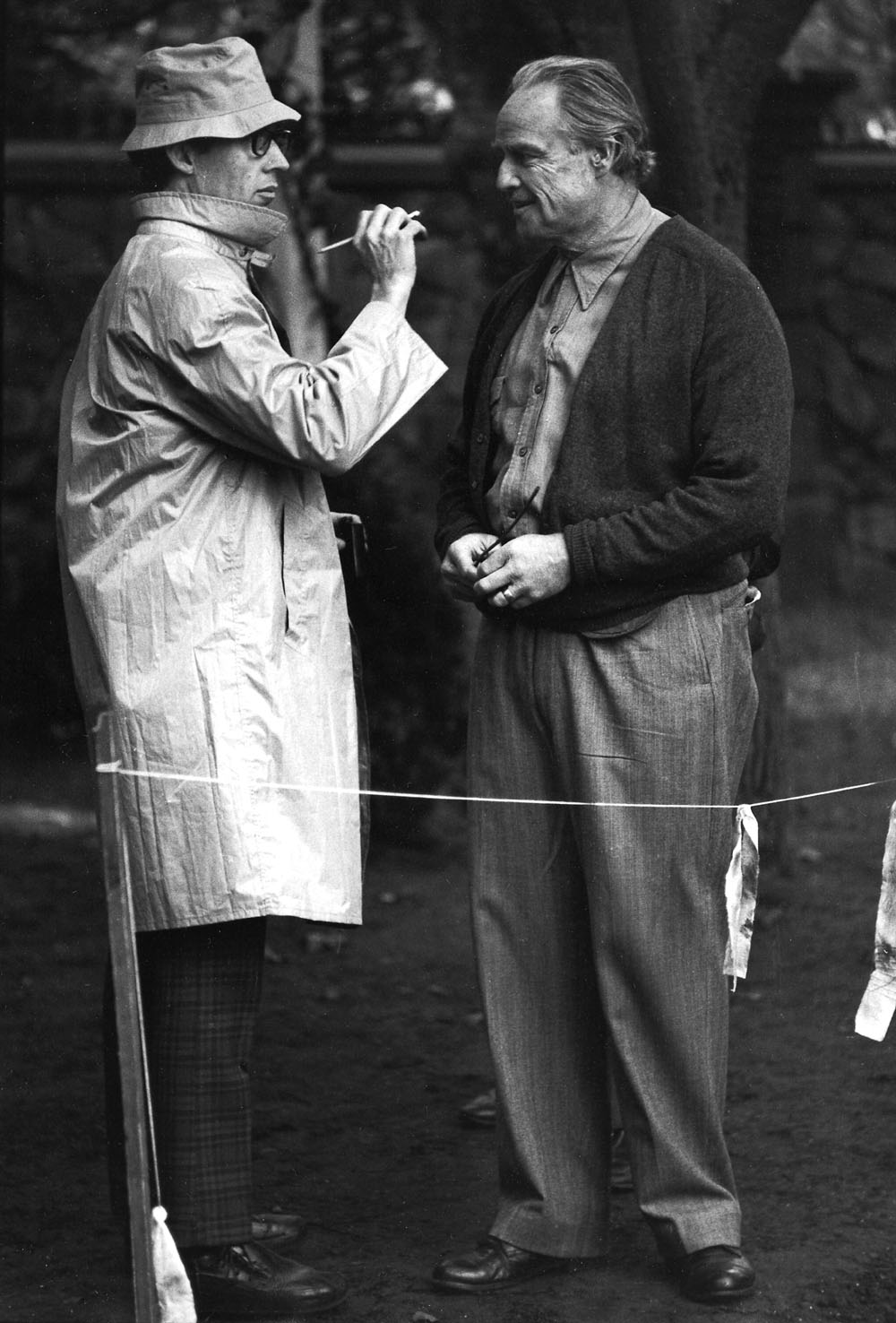 “A Tribute to Dick Smith: The Godfather of Special Make-Up Effects” will be presented by the Academy of Motion Picture Arts and Scienceson Wednesday, June 17, at 7:30 p.m. at the Samuel Goldwyn Theater in Beverly Hills.

Six-time Oscar-winning make-up artist Rick Baker will host the evening, which will be attended by Dick Smith himself and will feature a panel discussion including writer-director Guillermo del Toro, actor Hal Holbrook, and make-up artists Greg Cannom, Kazuhiro Tsuji and Andrew Clement, among others.

The evening will highlight Smith’s long career, which began in 1945 when he became NBC’s first make-up man. Among Smith’s credits are The World of Henry Orient, Little Big Man (in which Dustin Hoffman ends up playing a 100-year-old man), The Godfather, The Exorcist, The Godfather: Part II, The Stepford Wives, Taxi Driver, The Hunger, and Dad. Additionally, Smith shared an Oscar with Paul LeBlanc (below) for their work in Amadeus (1984). (There was no annual best make-up category at the Oscars until 1982.) 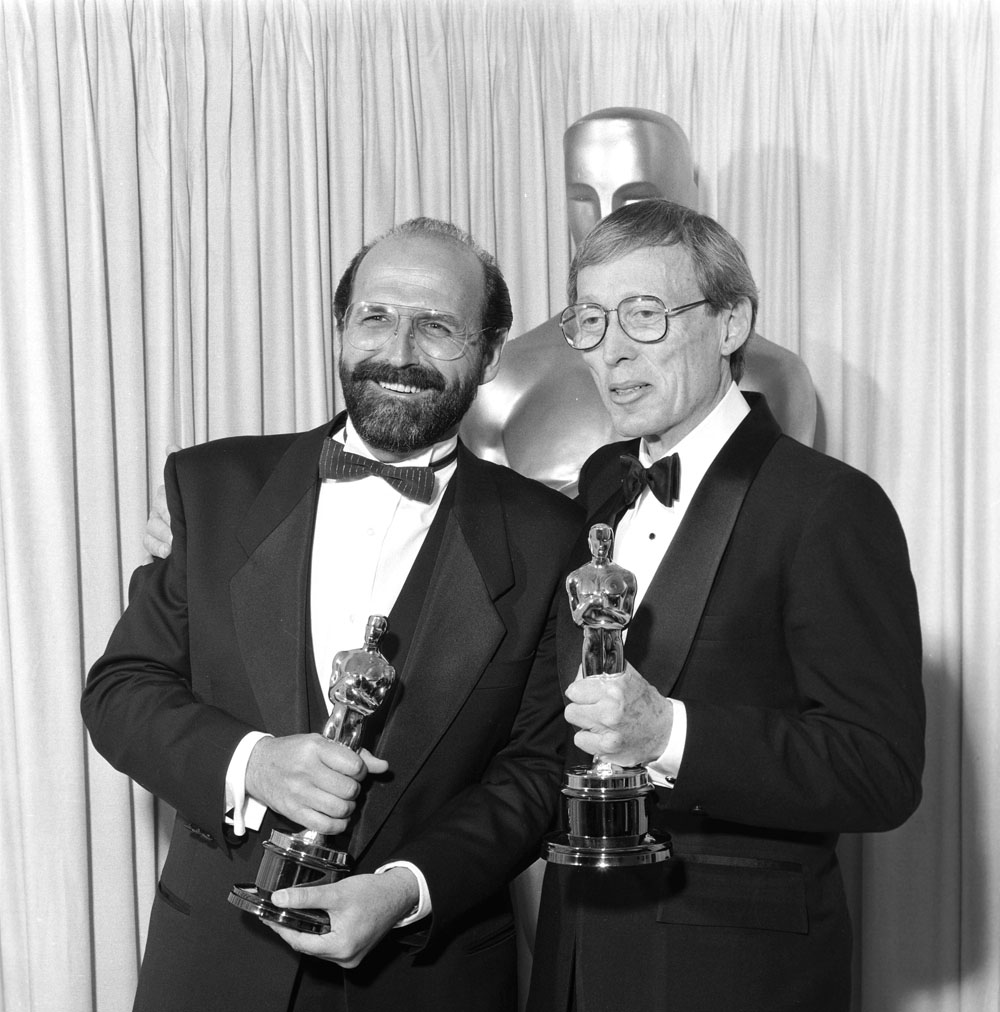 Tickets for “A Tribute to Dick Smith” are $5 for the general public and $3 for Academy members and students with a valid ID. The Academy is located at 8949 Wilshire Boulevard in Beverly Hills. For more information, call (310) 247-3600. For the latest updates on panelists and program details, visit www.oscars.org. 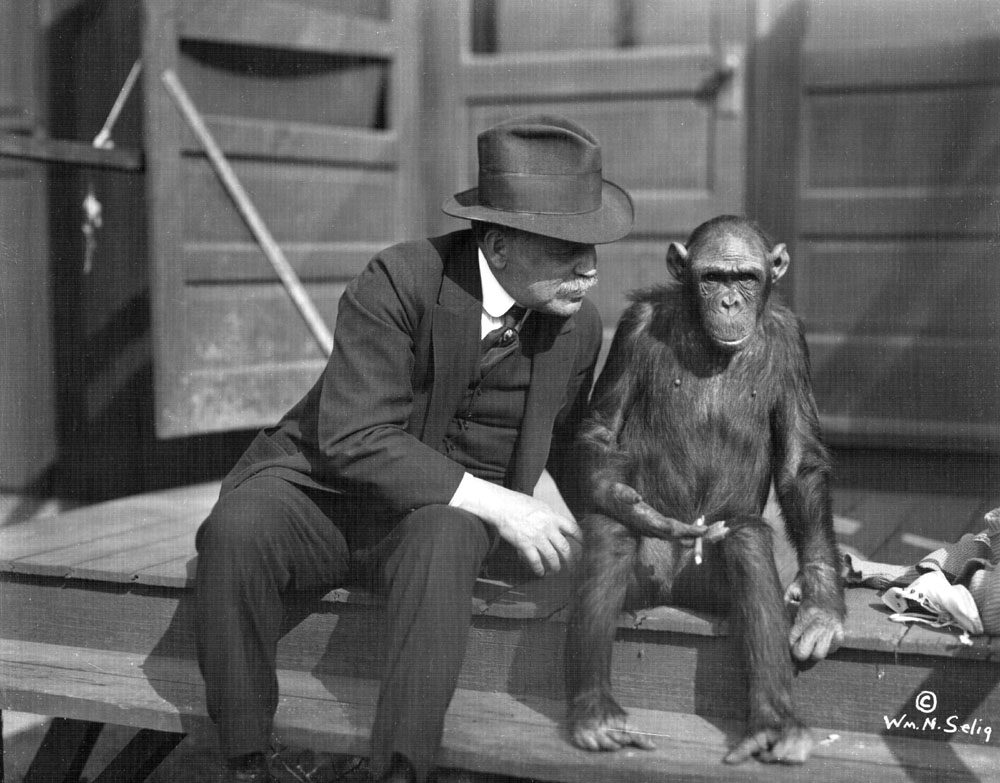 “Movies! Moguls! Monkeys! and Murder!” is the title of the Academy of Motion Picture Arts and Sciences’ celebration of the centennial of the first permanent film studio in the Los Angeles area. The event, which will showcase films shot in Los Angeles between 1909 and 1914, will take place on Wednesday, May 20, at 7:30 p.m. at the Linwood Dunn Theater in Hollywood.

“Movies! Moguls! Monkeys! and Murder!” will also kick off a three-month exhibition exploring those pioneering days, when independent producers set up shop in Southern California to enjoy the sunshine, the varied topography, and the distance between Los Angeles and the East Coast’s filmmaking oligarchy.

And what was the first LA-based film studio?

By 1911 the area had become a filmmaking hub. In its July issue, the now forgotten film trade publication Motography called Edendale “a very beautiful suburb of Los Angeles. It is the motion picture center of the Pacific Coast. With clear air and sunshine three hundred days out of the year, conditions are ideal for perfect picture making.  The scenic advantages of the location, too, are unique.  From [Edendale] can be seen the Pacific Ocean, twenty-two miles to the west, and the broad panorama of Southern California, with its fruit and stock ranches, its snowcapped mountains and its tropical [!!!!] vegetation, to the east, north and south. Within a short distance of Edendale may be found every known variety of national scenery, seemingly arranged by a master producer expressly for the motion picture camera.”

As per the Academy’s press release, “Movies! Moguls! Monkeys! and Murder!” will feature archival prints “representing the earliest surviving glimpses of Los Angeles as a filming location.” On display at the accompanying exhibition will be rare photographs, original correspondence, vintage camera equipment and other film-related artifacts, in addition to materials about both the first film studio murder and the Selig menagerie, a forerunner of the Los Angeles Zoo.

The murder in question is that of Francis Boggs, who was killed by his gardener in 1911. (Selig was reportedly also injured in the incident.)

In the late 1910s, Selig’s studio was sold to William Fox. A number of Theda Bara vehicles and Tom Mix Westerns were shot there and in the surrounding areas. More information on Edendale can be found at the Echo Park Historical Society website.

Tickets to “Movies! Moguls! Monkeys! and Murder!” on May 20 are $5 for the general public and $3 for Academy members and students with a valid ID. The exhibition is free and open to the public through August 30. Exhibition hours are Saturdays from noon to 6 p.m. and whenever Academy public programs are hosted at the Linwood Dunn Theater. The Academy will be closed for the Memorial and Independence Day holiday weekends, May 23 through 25 and July 3 through 5, respectively.

June 15 update: The Academy of Motion Picture Arts and Sciences presented “A Tribute to Alan and Marilyn Bergman,” on Friday, May 29. 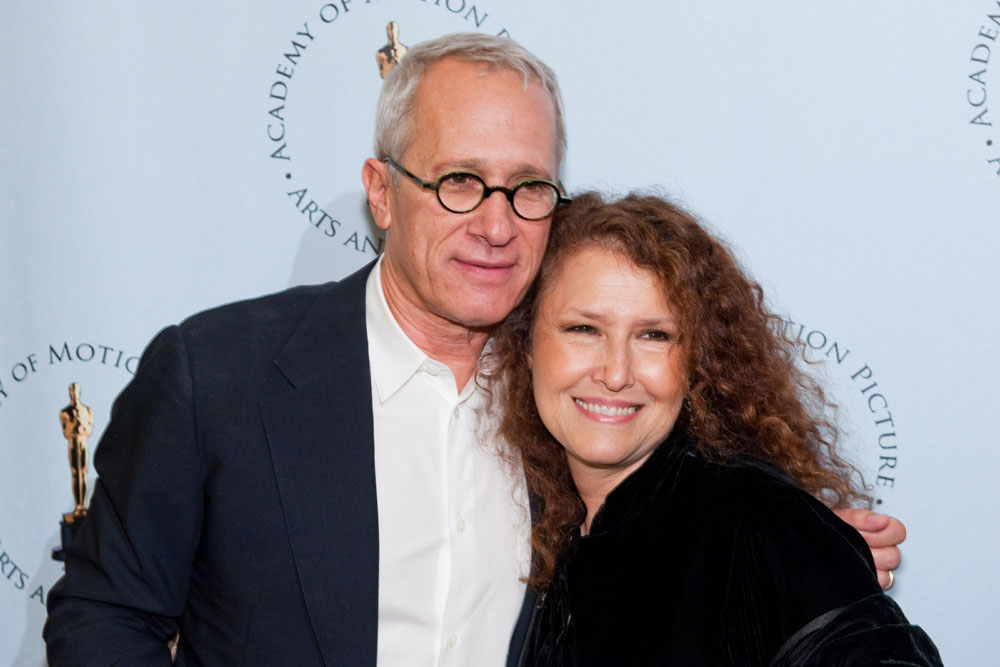 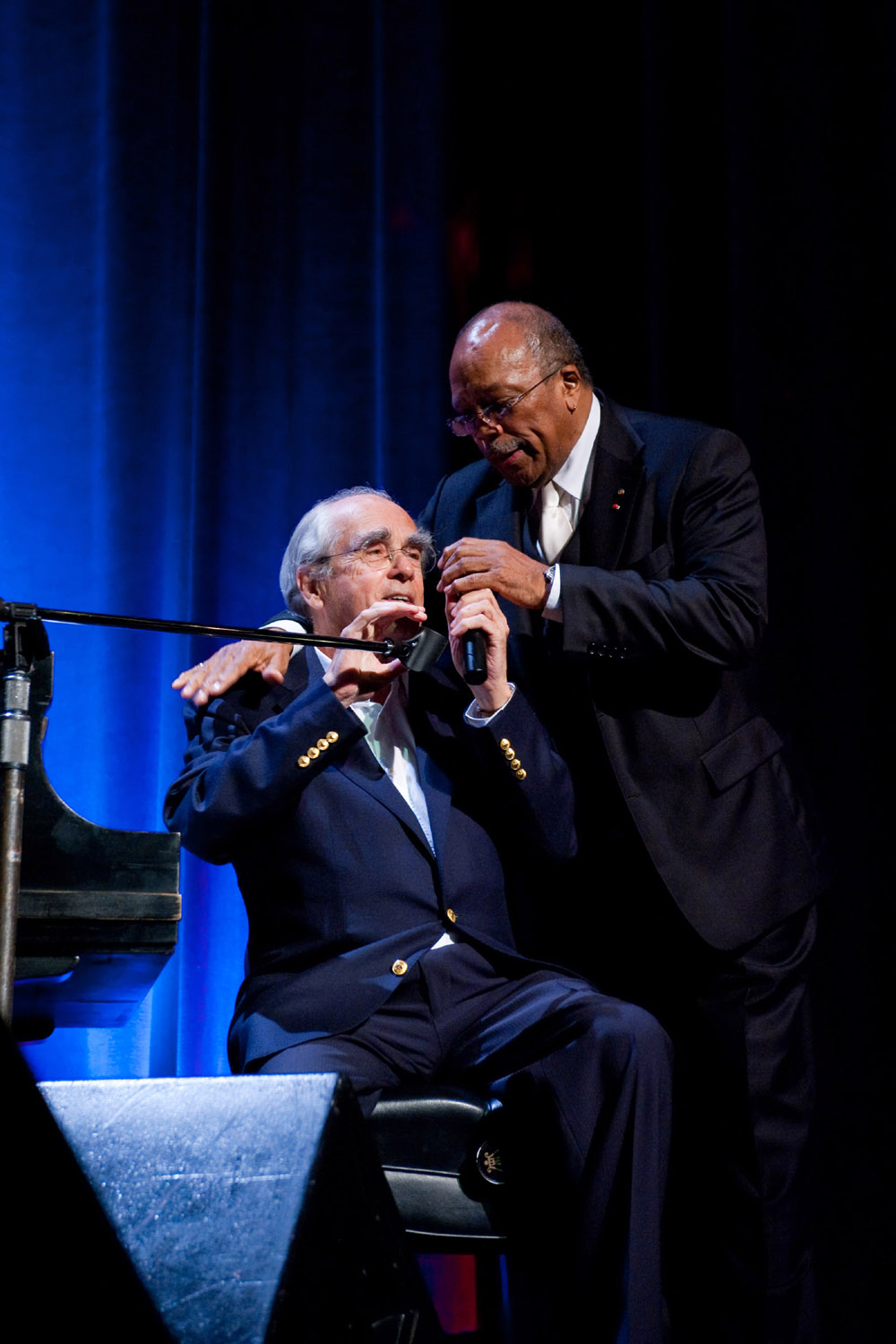 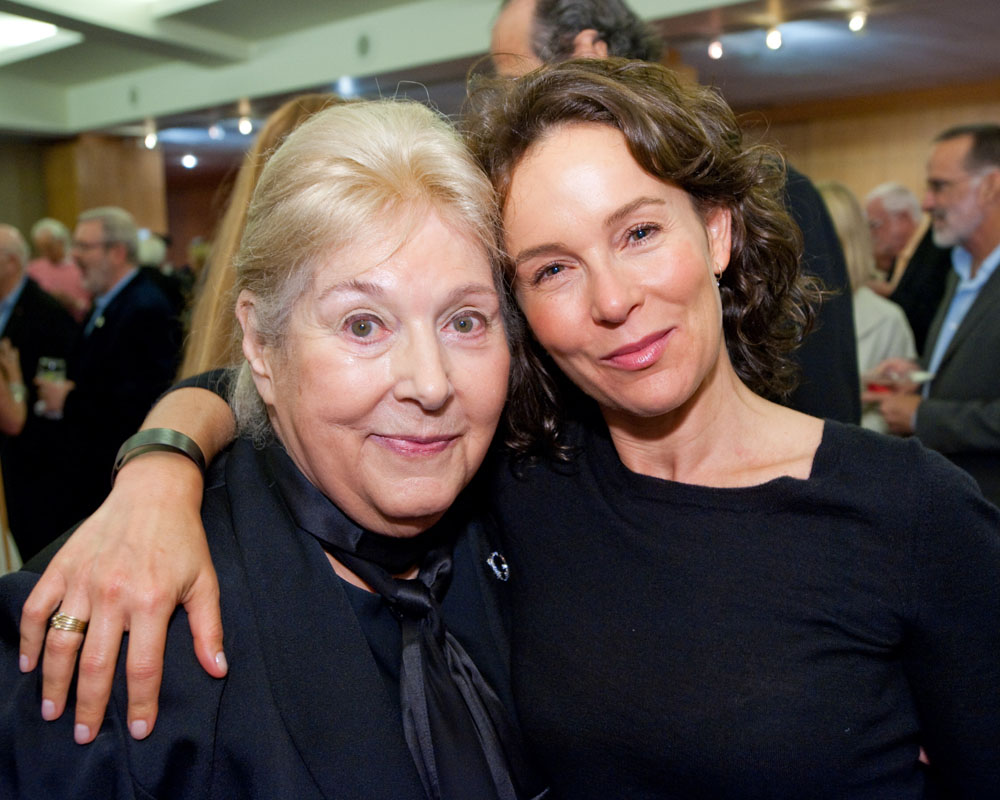 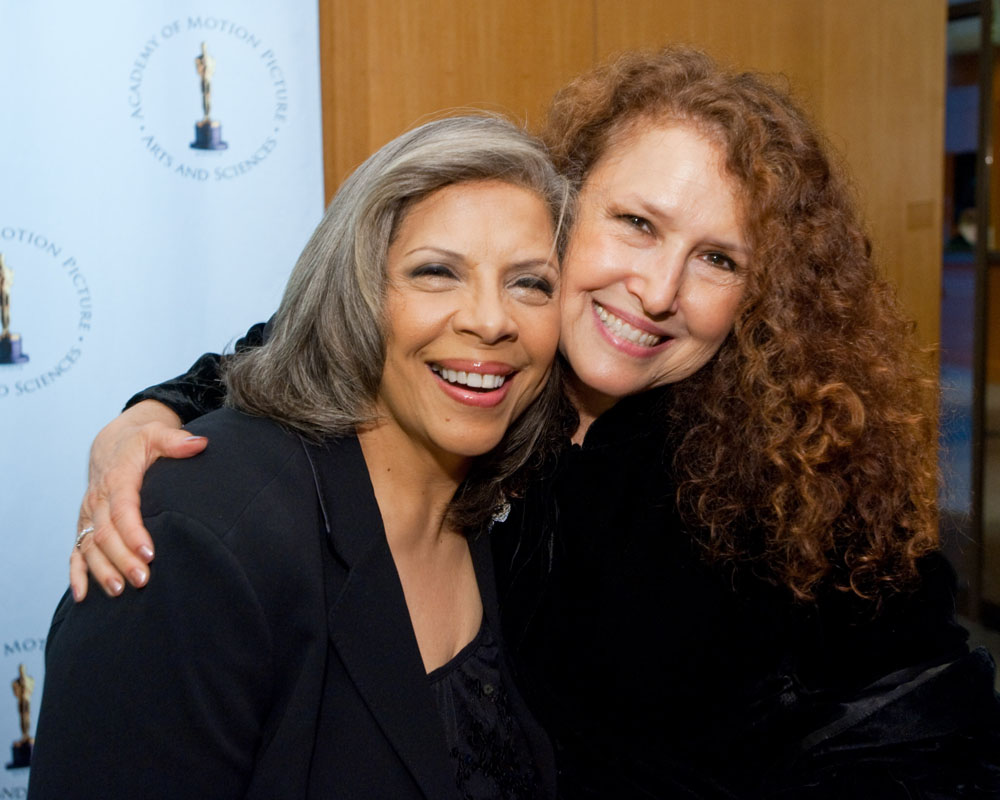 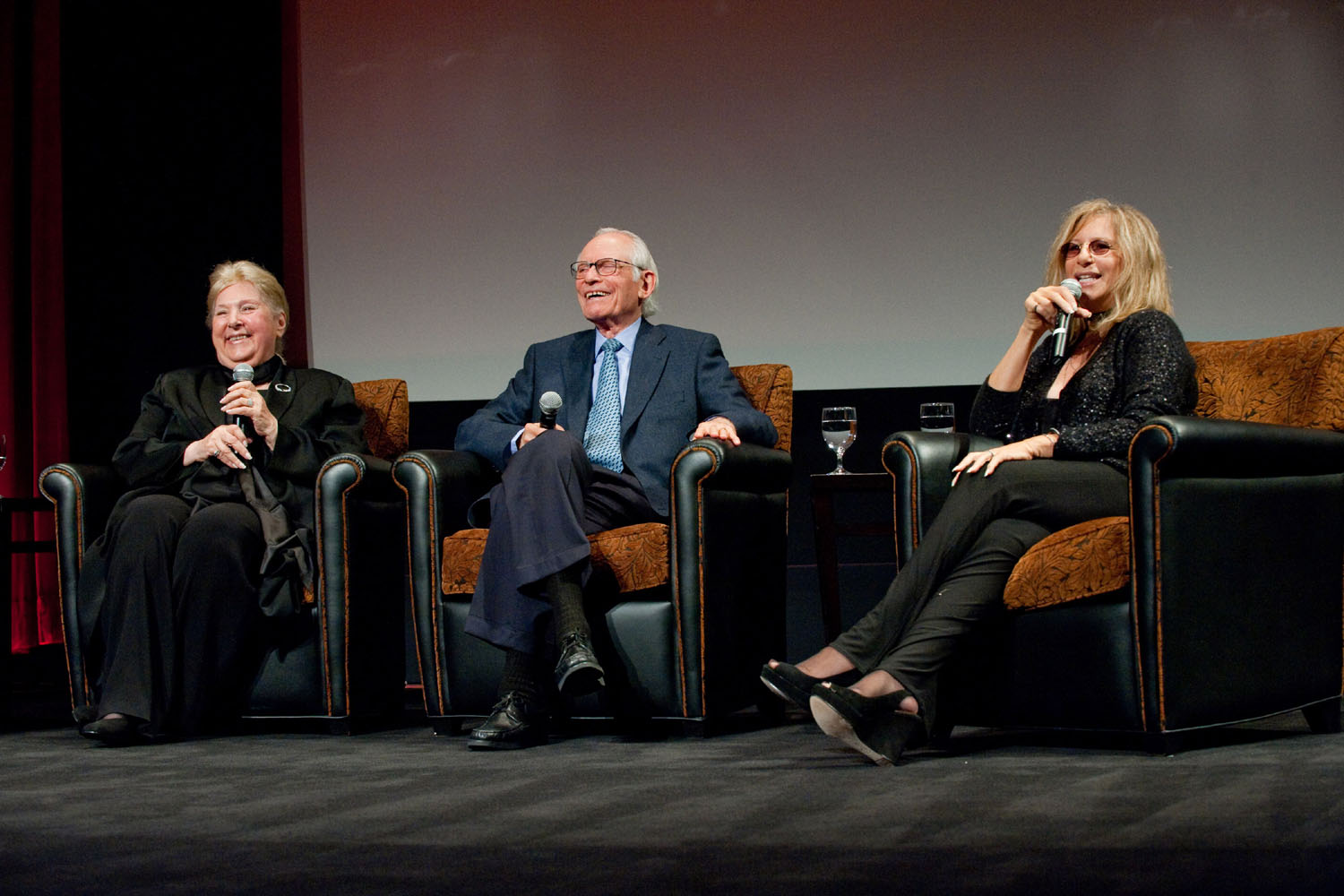 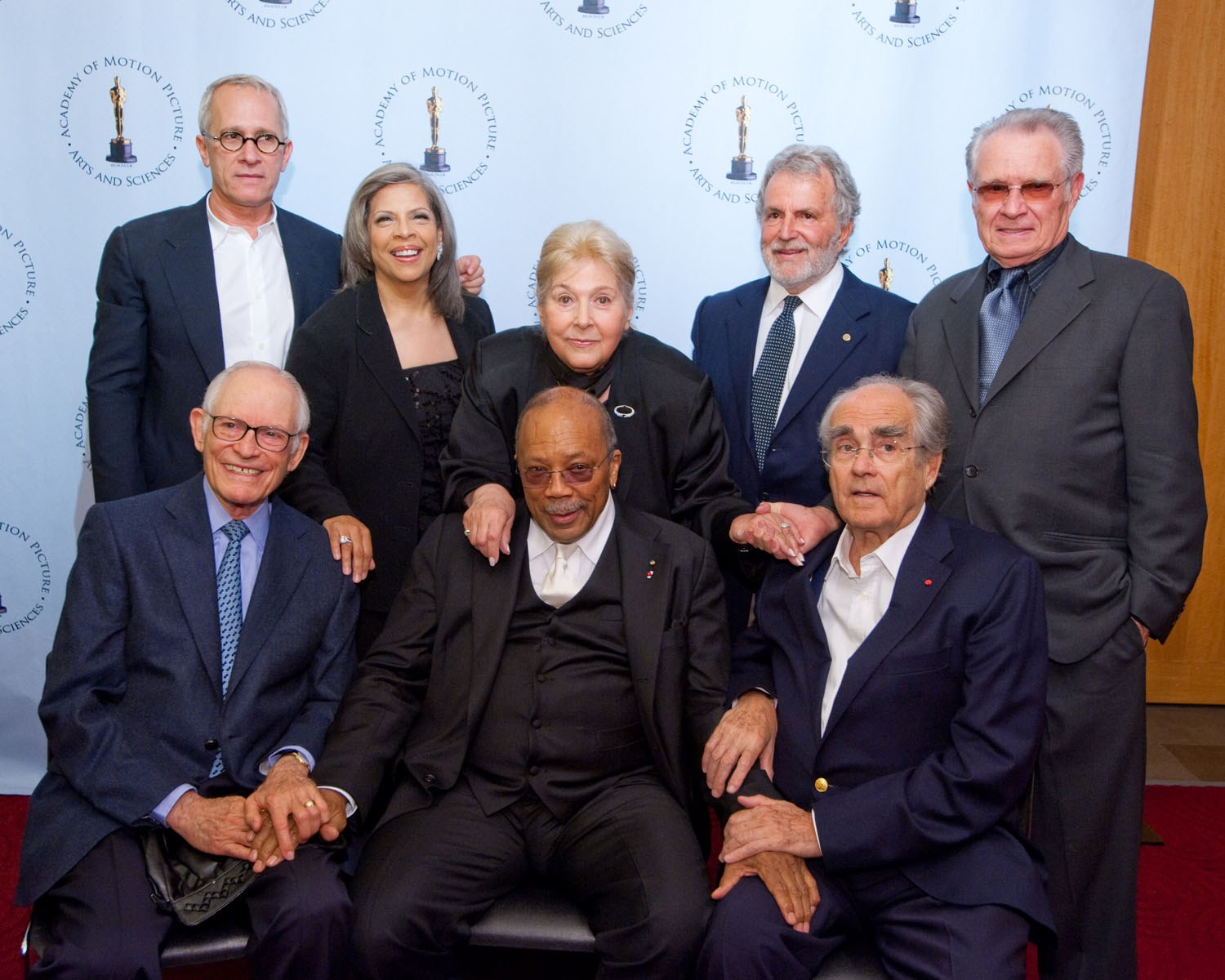 The Academy of Motion Picture Arts and Sciences presented “A Tribute to Alan and Marilyn Bergman,” on Friday, May 29, 2009. 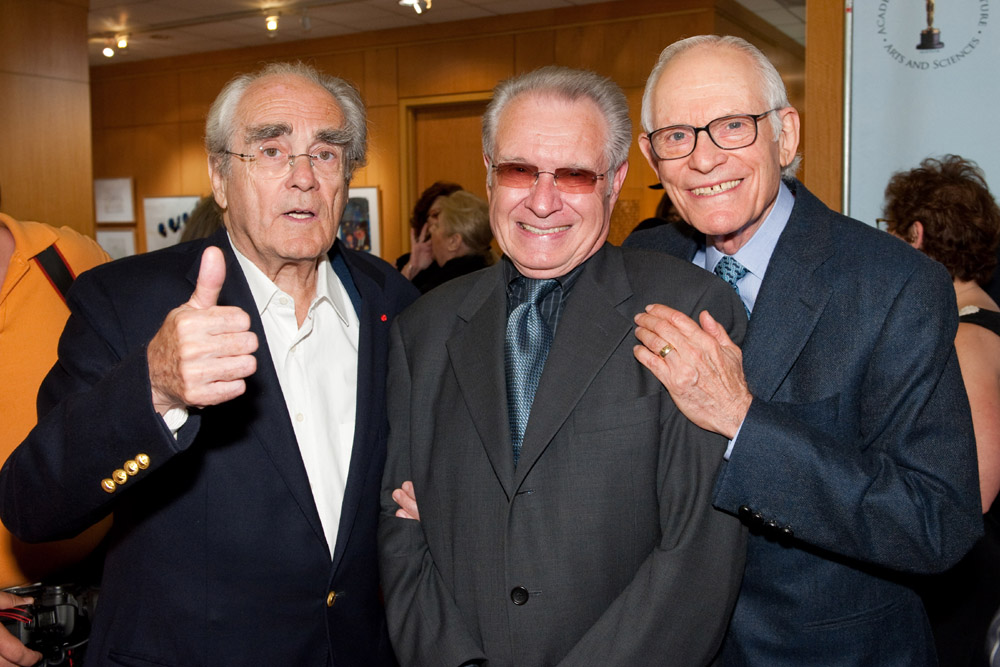 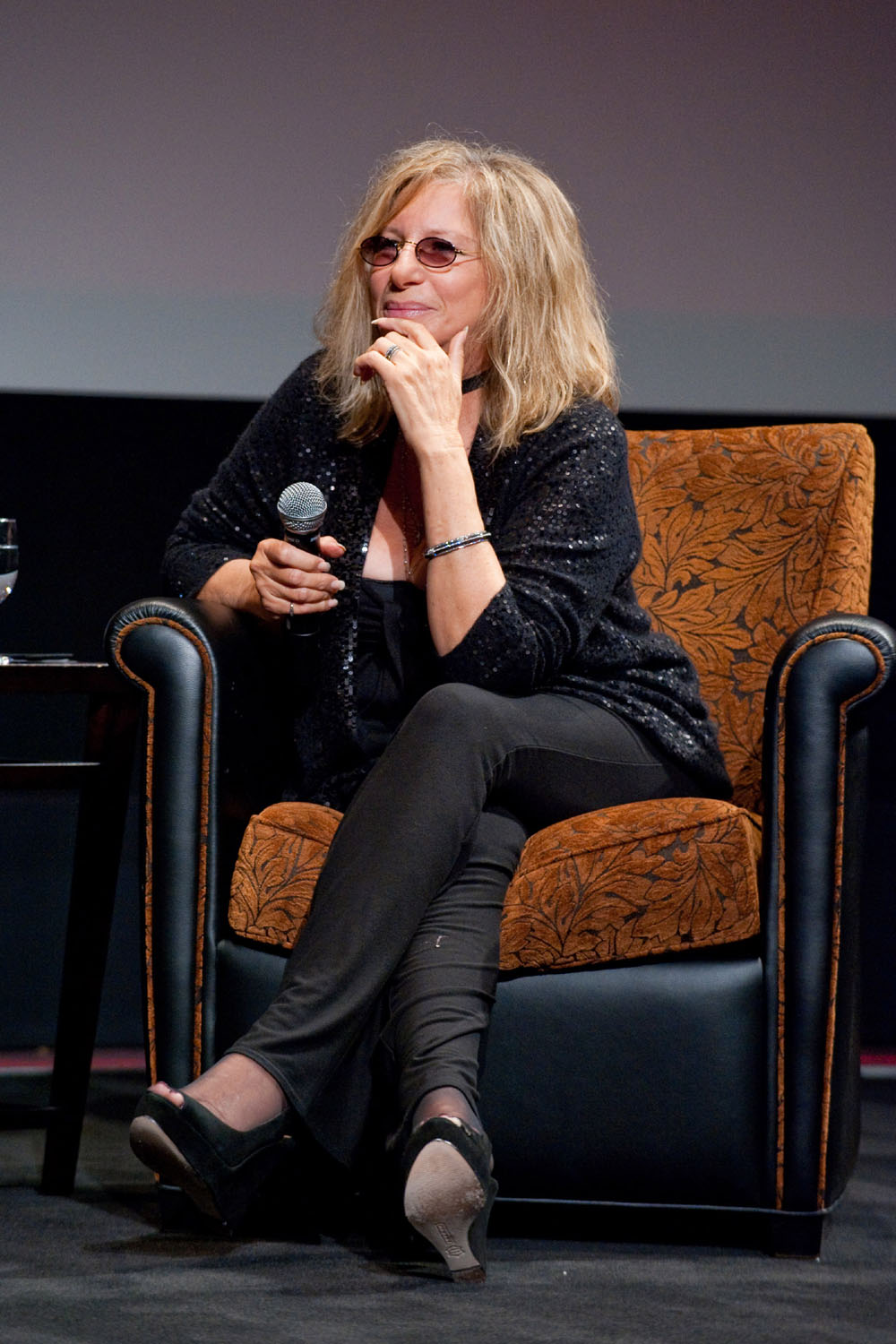 A Fool There Was: Liberated Female Destroys Weaker Sex

I saw Melissa Manchester for the first time when I was 16, in 1976. I was overwhelmed and dumbfounded..her voice,her jubulant dancing all over the stage, and her wonderful writing… everything about her was what I wanted to be in my adult life. A powerful writer and successful woman,who knew exactly what she wanted to say and had the voice that caused everyone to stand still and listen. I had never and STILL have not seen so much talent wrapped up in one person. After the show, she had waiting fans come to her dressing room to say hello and had given all of us the left over posters from that night’s performance, autographing each personally. Not only was she an unbelievable talent..she was such a sweet lady. I’ve followed her career closely ever since,and am still as taken with her writing and performances as I was 30 years ago.
I was there at Lakeside too last month.She comes to Ohio or a neighboring state about once per year. Every performance is flawless like that night at Lakeside. I am a lifelong fan who is thrilled to see her touring again, to hear that voice from God, and to still say Hi after the show. We love you, Melissa!

I attended the concert of Ms. Manchester at Lakeside, Ohio on July 11th. Ms. Manchester has no ordinary voice. In fact, her voice is extraordinary! With only her piano, a back-up keyboard/guitarist and some back-up singing from others, her voice was pitch-perfect and crystral clear. She talked with the audience in between her songs and she stayed after the concert to greet people, sign her autograph or take a picture with a fan! She was very gracious, warm and polite. I did have the opportunity to meet her after her concert and she autographed her CD for me and took a picture with me that came out to be very good of both of us.

Thank you, Ms. Manchester for such a wonderful and memorable evening on the lake. I really enjoyed the following new songs” “A Mother’s Prayer”, “Bend”, “When I Look Down That Road” and especially the “Power of Ribbons”. Lastly, Ms. Manchester performed a new song that she wrote that day entitled, “Lakeside, Ohio”. I loved it! I wonder if she will be recording it so that her fans who were there that evening would be able to purchase it??!! I would like to purchase several copies of it. Hopefully, someone at Lakeside that evening asked her to record it for them so we would be able to purchase it.

Ms. Manchester, please keep on singing for those of us who grew up in the 1970s and as someone who had all of your albums and then I bought your latest CD at Lakeside…it was a pleasure to hear you again and to meet you. Thank you too for your generosity of time and warmth to those of us who couldn’t wait to meet you! I have been playing your CD in my car! I love our picture together and I will keep it as a special memory and treasure of my life!

Hopefully, we will be graced with your presence and voice next year at Lakeside, Ohio.