Andre Soares 10 years ago
Alan Turing: gay cryptographer was World War II “hero” – well, not that he risked his life while blowing people up or bombing cities; Turing, according to some “the father of computer science and the father of artificial intelligence,” came up with code-breaking techniques that, once again according to some, shortened the war in Europe and consequently saved countless lives. Unfortunately for himself, Alan Turing was what the overwhelming majority of God-fearing people (and most atheists) back then perceived as a vile, disgusting pervert; in other words, Turing was gay and seemingly enjoyed doing the kinds of things gay guys do when they have sex. Worse yet, at the time his sexual orientation was made public – following a burglary at his residence – Turing, then 39, was involved in a sexual relationship with a man two decades younger than he was. That meant perversion to the nth degree. Faced with the choice between jail and hormone treatment – a procedure nicknamed “chemical castration” – he opted for the latter; that, in turn, led to a variety of health issues possibly culminating in his untimely death, an apparent suicide, shortly before his 42nd birthday. The death “weapon” may have been a cyanide-laced apple – if so, shades of Snow White and the Seven Dwarfs, of which, biographers Andrew Hodges and David Leavitt affirm, Turing was an ardent fan.
Contents hide
1. Alan Turing: Gay cryptographer’s biography tops ‘Black List’ of Best Unproduced Screenplays
1.1. British government’s Thank You for Your Service: ‘Chemical castration’ as treatment for gay perversion
1.2. Alan Turing movie?
1.3. No gay sex please, we’re British
1.4. ‘The Imitation Game’: Alan Turing’s life as it wasn’t quite
1.5. Other Best Unproduced Screenplays
1.6. ‘Juno’ & ‘(500) Days of Summers’
1.7. Orson Welles’ ‘Citizen Kane’ Oscar statuette to be auctioned following convoluted history
1.8. Cinematic masterpiece
1.9. Complex Oscar statuette history
1.10. Unsuccessful auction attempt

Based on the true story of British World War II cryptographer Alan Turing, who happened to be a gay man, Graham Moore’s The Imitation Game topped – by a large margin (133 votes) – film executive Franklin Leonard’s Black List of best unproduced screenplays of 2011. About 300 film executives/script readers reportedly took part in the poll.

But what’s so intriguing about a gay cryptographer?

Well, when in his 30s, the London-born (on June 23, 1912) Alan Turing concocted code-breaking techniques that helped to decipher the Nazis’ Enigma machine code. Turing’s scientific endeavors are supposed to have shortened the war in Europe, as they resulted in a quicker defeat of Nazi forces.

Update: In the essay “Alan Turing: Mathematical Mechanist,” Anthony Beavers, University of Evansville Professor of Philosophy and Director of Cognitive Science, states that Alan Turing “is often credited with being the father of computer science and the father of artificial intelligence.”

British government’s Thank You for Your Service: ‘Chemical castration’ as treatment for gay perversion

Alan Turing received his thanks from the British government in 1952, when, at age 39, he was charged with “gross indecency,” i.e., gay sex – at the time not only illegal in the United Kingdom, but also perceived as a vile, filthy, disgusting perversion.

Turing’s sexual orientation was made public after his apartment had been burglarized and he admitted to the police that he had been involved in a sexual relationship with a much younger man, 19-year-old Arnold Murray (possibly the burglary culprit).

Instead of jail, Turing opted to be treated with hormones that would destroy his libido, a procedure nicknamed “chemical castration.” Serious health issues, including impotence, ensued.

In 1954, Turing died from cyanide poisoning – an apparent suicide (though there have been claims to the contrary) a couple of weeks before his 42nd birthday.

It’s hard to imagine a Hollywood studio touching Alan Turing’s story – unless, of course, the screenplay is geared to please the average 14-year-old multiplex-goer.

In other words, focus on the code-breaking suspense and pretend the (gay) human drama – especially the unsavory gay sex bits and the even more unsavory relationship with the much younger man – never existed.

That would be something along the lines of Ron Howard’s meticulously sanitized and fictionalized international blockbuster and Best Picture Oscar winner A Beautiful Mind, with (heterosexual) love triumphant before the final credits.

On the other hand, it’s hard to understand why an independent British company wouldn’t jump at the chance of producing a full-fledged, no-holds-barred Alan Turing biopic aimed at those who didn’t stop their mental evolution at age 14.

February 2012 update: The British government has denied a request to posthumously pardon Alan Turing. In the House of Lords, Justice Minister Lord (Tom) McNally declared in part, as quoted in The Guardian:

A posthumous pardon was not considered appropriate as Alan Turing was properly convicted of what at the time was a criminal offence. He would have known that his offence was against the law and that he would be prosecuted.

Moral of the story: Alan Turing, like Oscar Wilde before him, should never have gotten laid. At least not with another guy. Certainly not in a Country of Laws like England.

‘The Imitation Game’: Alan Turing’s life as it wasn’t quite

Graham Moore was credited for the screenplay – which, at least in its final form, does not feature Arnold Murray, focusing instead on Turing’s work, his friendship/relationship – which almost ended in marriage – with Clarke, and a totally fabricated subplot involving Soviet double agent John Cairncross (played by Allen Leech).

Apparently, the many changes ultimately panned out. Budgeted at a reported $14 million, The Imitation Game grossed $233 million worldwide.

Besides, the fictionalized Alan Turing biopic received/was nominated for dozens of awards, including nine nominations for the BAFTAs and a total of eight nominations for the Academy Awards – with screenwriter Graham Moore taking home an Oscar statuette.

The Imitation Game trailer: Benedict Cumberbatch and Keira Knightley star in Morten Tyldum’s World War II drama about computer scientist and mathematician Alan Turing and his relationship with … not, for instance, gay lover/fuck buddy Arnold Murray, but fellow cryptoanalyst Joan Clarke. Both Cumberbatch and Knightley were nominated for Academy Awards; the former, looking more like TV’s Sherlock Holmes than Alan Turing, as a lead actor, the latter as a supporting actress. After having undergone treatment to cure – or at least neutralize – his “perversion,” Alan Turing died at age 41 in 1954.

Trailing the Alan Turing screenplay, Chris Hutton and Eddie O’Keefe’s When the Street Lights Go On was the no. 2 title – with 84 votes – on the December 2012 Black List. The script chronicles the reaction of a small town after the murder of a high-school girl and a teacher in the early 1980s.

The no. 3 Best Unproduced Screenplay, with 59 votes, was Evan Susser and Van Robichaux’s Chewie, described as “a satirical behind the scenes look at the making of Star Wars through the eyes of Peter Mayhew who played Chewbacca.”

Rounding out the Top Five Black List screenplays were:

Whether or not this annual list of Best Unproduced Screenplays is merely a ploy by agents and publicists to push their clients’ projects, it’s interesting to see what sort of material has been floating around.

Previous The Big List screenplays that, for better or for worse, eventually got made include: 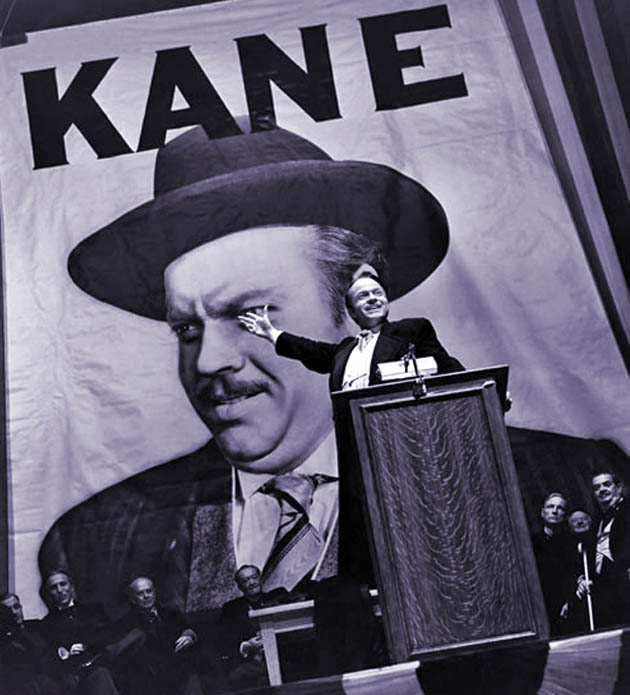 This December 2012, Elizabeth Taylor’s jewelry collection has just fetched a record-setting $115 million. Chances are Orson Welles’ Academy Award for his 1941 classic Citizen Kane won’t be sold for even one hundredth of that amount next Dec. 20.

Even so, Welles’ little golden, sword-holding bald man is bound to earn its anonymous seller much more than the $1 price tag the Academy of Motion Picture Arts and Sciences imposes on all post-1950 Oscar statuettes.

Considered one of the masterworks of world cinema, Citizen Kane lost the Best Picture Oscar of 1941 to John Ford’s family/labor relations drama How Green Was My Valley.

Director Orson Welles also lost the Oscar to Ford – who by then already had two Best Director statuettes at home (The Informer, 1935; The Grapes of Wrath, 1940) – while actor Orson Welles lost to Gary Cooper for his performance as the aw-shucksy title character in Howard Hawks’ juvenile (and wildly popular) World War I drama Sergeant York.

On the positive side, screenwriter Orson Welles and collaborator Herman J. Mankiewicz (brother of All About Eve writer/director Joseph L. Mankiewicz) did take home the Academy Award for Best Original Screenplay. That turned out to be the only Citizen Kane win out of nine nominations.

The movie’s legacy of on and offscreen drama has beset even the award itself; for years [Orson Welles’ statuette] had gone missing and the Academy issued a replacement to Beatrice Welles, Orson’s youngest daughter and sole heir. The original had all along been in the possession of cinematographer Gary Graver [Welles’ collaborator on The Other Side of the Wind, Bikini Traffic School, Hidden Beauties, and Hotel Exotica], who tried to sell it in 1994. Beatrice learned of her father’s treasure resurfacing and filed suit in California, stopping the sale, and returning this precious piece to the Welles family, who displayed it at the 75th Academy Awards in 2003.

That same year, Beatrice Welles tried to sell “her father’s treasure” at a Christie’s auction in New York City, but she was sued by the Academy, which wanted the right to buy the statuette for that pesky $1.

Welles, however, ended up retaining the right to sell the Oscar, proceeding to do so to the Dax Foundation, a California nonprofit whose stated mission is to help humans and their fellow animals.

Later on, a 2007 attempt to auction off Orson Welles’ Citizen Kane Oscar was unsuccessful, but Hollywood-related auctions – e.g., Elizabeth Taylor’s jewels, Debbie Reynolds’ movie memorabilia collection – have fetched quite a bit of money in recent months.

And let’s not forget that twelve years ago Michael Jackson bought the Best Picture Oscar for Gone with the Wind for $1.54 million.

Also on his site, Sanders asserts that “complete chain of ownership will be provided to the winning bidder.” The Academy, for its part, has remained mum about the whole matter.