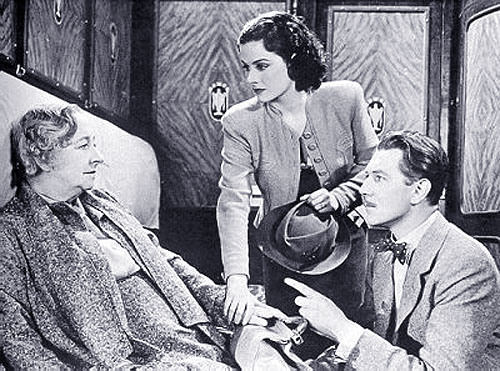 On Nov. 27–28, the Los Angeles County Museum of Art (website) will present the last four films in its “Hitchcock: The British Thrillers” series. They are:

The 39 Steps is the film that turned Alfred Hitchcock into an internationally acclaimed filmmaker. The film goes from one situation to another without making any sense whatsoever, much like North by Northwest 24 years later. If you don’t mind plot abysses and absurd near-death experiences, The 39 Steps can be quite entertaining. If you do, well, check it out anyhow: The talented – and unfortunately way underused – Robert Donat is delightful as the hero, while Madeleine Carroll is everything a Hitchcock blonde should be – and more. As a plus, there’s a rare early film appearance by stage star Peggy Ashcroft, best known for her Oscar-winning role as Mrs. Moore in David Lean’s A Passage to India.

The Lady Vanishes is my favorite among Hitchcock’s British films. In fact, it’s one of my favorite Hitchcock films, period. It offers a complex plot (don’t bother attempting to unravel it) about the disappearance of an old lady who may never have existed, spies, counter-spies, and all-around marvelous performances, from Michael Redgrave and Margaret Lockwood, to scene stealers Dame May Whitty (as the disappearee), Paul Lukas (in his villanous days), Basil Radford, Cecil Parker, Naunton Wayne, Linden Travers, and Mary Clare.

Both Number 17 and Young and Innocent are minor Hitchcock efforts, worth looking at as curiosities. Stage-trained Nova Pilbeam seemed at one point to be about to become a major star, but that never happened. She retired from films following her second marriage (to BBC radio journalist Alexander Whyte) in 1950. Nova Pilbeam turned 90 this past Nov. 15.

This civilized thriller follows the escapades of Donat, a secret service agent who is implicated in a murder. Police and members of an occult spy ring relentlessly pursue him across the Scottish moors as he tries to clear himself by finding the real killers. The film builds to one of Hitchcock’s finest climaxes: a music hall where “Mr. Memory” answers riddles on stage while the heavies stalk Donat through the audience. “Hitchcock rates The 39 Steps as one of his favorite films. He feels that its tempo is perfect. There is no dead footage, and the audience’s absorption in the web of intrigue creates the impression of extremely fast pace. Hitchcock once commented, ‘What I liked were the sudden switches and the jumping from one situation to another with such rapidity. Donat leaping out of the window of the police station with half a handcuff on, and immediately walking into a Salvation Army Hall… ‘Thank God you’ve come, Mr. so-and-so,’ they say and put him on a platform. Then a girl comes along with two men and takes him by car to the police station, but it’s not really to the police station…. The rapidity of the switches, that’s the great thing about it.”—Richard A. Harris, Michael S. Lasky, The Complete Films of Alfred Hitchcock.

An old dark house where a rogue’s gallery of baddies gathers is the starting point for a rapid flow of dramatic entrances, mysterious strangers, impersonations, reverses and reveals. Along the way we discover a handcuffed corpse, a stolen necklace, a prowling detective and a female crook who falls for him. At the climax, as a train hurtles through a station en route to destiny, Hitchcock cuts to a close-up of a wooden sign that reads: “Stop Here for Dainty Teas!” Hitchcock’s seventeenth feature film is “deliriously and irresistibly comic… a charming film to the extent that it shows us a grownup child playing with his favorite toys.”— Eric Rohmer and Claude Chabrol.

When dotty old Miss Froy vanishes from a trans-European train that is snowbound in the Balkans, a poor musician and a beautiful heiress team up to uncover a nest of spies while falling in love. The final and snappiest of Hitchcock’s British thrillers, it blends wit, invention, suspense and charm in a way that only Graham Greene has matched on the printed page. “Some of the finest examples of Hitchcock’s touches . . . directed with such skill and velocity that it has come to represent the quintessence of screen suspense.”—Pauline Kael.
1938/b&w/96 min. | Scr: Sidney Gilliat, Frank Launder; dir: Alfred Hitchcock; w/ Margaret Lockwood, Michael Redgrave, Dame May Whitty

A young man, accused of murder, is pursued by the police as he and his lovely companion search the Cornish countryside for the real killer. The chase is played out against the gentle charm of the rural surroundings, but as the couple’s panic mounts and terror lurks at every turn, the seemingly serene landscape grows ugly and threatening. “This underrated thriller … takes a common plot, a young man wrongly accused of murder who tries to discover the real murderer, and adds a great script, great acting, and of course great directing by the master of suspense himself.”—Britmovie. 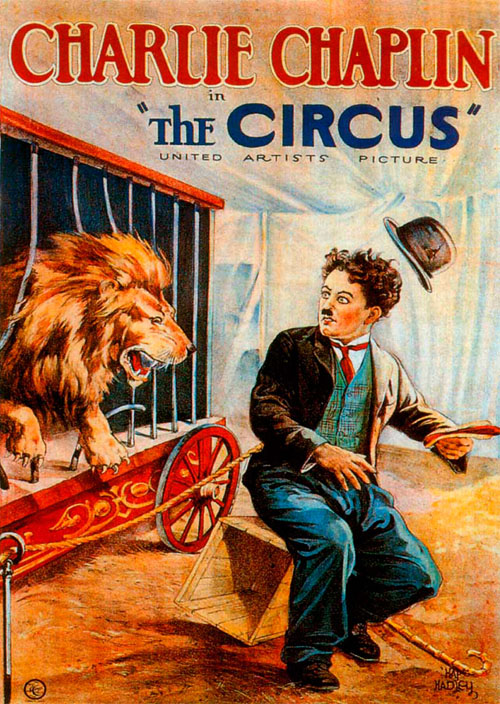 Among the upcoming screenings in the November film series of the Library of Congress’ Packard Campus for Audio Visual Conservation in Culpeper, Va., are vehicles for just about everyone, from Charles Chaplin to Dennis Hopper; from Mickey Rooney and Judy Garland to Robin Williams’ voice.

I’ve never seen Disney’s Aladdin, though I know it was a big hit when it came out. Robin Williams was particularly praised for his voice work as the Genie – some even went as far as to demand that the Academy come up with Oscars for best voice performance.

No one came up with that demand when Charles Chaplin’s The Circus was released, perhaps because the film has no audible dialogue. I’m not a big fan of silent film comedy, but those who are into that will probably enjoy this one. The members of the newly founded Academy of Motion Picture Arts and Sciences surely did, since they decided to give Chaplin a special Oscar for his “versatility and genius in writing, acting, directing and producing The Circus.”

Addendum: The Circus will no longer be screened. It has been replaced by Harold Lloyd’s The Kid Brother.

I’ve never gone see Elem Klimov’s Come and See (bad pun intended), a tough Russian World War II drama that from what I’ve heard is not for the squeamish (or the non-squeamish who simply can’t stand on-screen violence). I’ve never seen Love Finds Andy Hardy, either, because it’s not for the faint of heart; I mean, them Hardys are the scariest movie family ever. Even so, once I muster enough courage I need to check out this Andy Hardy entry: I find it fascinating that those (immensely popular) Andy Hardy flicks could be taken as heartwarming representations of American Family Life. Gee, Pops! indeed.

In Easy Rider you can see what happened to the next generation of Gee, Pops’ing Hardys: They grew into aimless, drug-using bikers. Considering their family background, who the hell can blame them? Dennis Hopper and Peter Fonda star in this seminal movie that in its own way is as idealized a depiction of the American counterculture of the ’60s as the Andy Hardy flicks were idealized depictions of the country’s pre-World War II middle-class suburbia. But idealized or no, Jack Nicholson earned an Academy Award nomination as best supporting actor for this one.

The Packard Campus’ November series began on the 5th: the three films that have already been shown are The Miracle Worker, which earned Anne Bancroft and Patty Duke Oscars in, respectively, the best actress and best supporting actress categories; Anatole Litvak’s anti-Nazi thriller Confessions of a Nazi Spy, starring Edward G. Robinson; and Ride the High Country, a well-made Western that happened to be Randolph Scott’s cinematic swan song. (Co-star Joel McCrea would make a couple more film appearances in the ’70s.)

Short subjects will be presented before select programs. Titles are subject to change without notice. All Packard Campus programs are free and open to the public. For reservation information, call (540) 827-1079 extension 79994 or (202) 707-9994 during business hours, beginning one week before any given screening. For further information on the theater and film series, visit www.loc.gov/avconservation/theater/.

The Library of Congress Packard Campus for Audio Visual Conservation is a state-of-the-art facility where the nation’s library acquires, preserves and provides access to the world’s largest and most comprehensive collection of films, television programs, radio broadcasts and sound recordings.

The Packard Campus Theater will be closed on Thanksgiving weekend.

Schedule and film information from the Library of Congress’ Packard Campus website:

The story of Anne Sullivan’s struggle to teach the blind and deaf Helen Keller how to communicate.

With Anne Bancroft and Patty Duke.

An FBI agent risks his life to infiltrate Nazi sympathizers in the U.S.

Two aging gunslingers sign on to transport gold from a remote mining town. Selected for the National Film Registry in 1994.

With Randolph Scott and Joel McCrea.

Two dumb soda jerks dream of writing radio mysteries. When they try to pitch an idea at a radio station, they end up in the middle of a real murder when the station owner is killed during a broadcast.

With Bud Abbott and Lou Costello.

The story of eastern Soviet Union villages that were destroyed by German troops in 1943 as seen through the eyes of a teenage boy who loses his home, family and friends. In German and Russian with English subtitles. Scenes of disturbing violence – not for children.

With Aleksei Kravchenko and lga Mironova.

Aladdin, a street urchin, falls in love with a princess and inds a magical genie who grants him three wishes.

With the voices of Robin Williams, Scott Weinger and Linda Larkin.

A small-town boy tries to juggle two girlfriends at once. Selected for the National Film Registry in 2000.

Directed by George B. Seitz.

With Mickey Rooney and Judy Garland.

A cross-country trip to sell drugs puts two hippie bikers on a collision course with small-town prejudices. Rated R. Selected for the National Film Registry in 1998.

With Dennis Hopper and Peter Fonda.

The most important family in Hickoryville is (naturally enough) the Hickorys, with sheriff Jim and his tough manly sons Leo and Olin. The timid youngest son (Harold Lloyd), doesn’t have the muscles to match up to them, so he has to use his wits to win the respect of his family and win the love of beautiful Mary. Silent comedy with live musical accompaniment by Andrew Simpson.

With Harold Lloyd and Jobyna Ralston.

Images: Courtesy of the Library of Congress

As per The Hollywood Reporter, the Berlin International Film Festival (website) will mark its 60th anniversary with the retrospective “Play it Again …!,” featuring 40 films compiled by British film critic David Thomson from previous Berlin festivals.

Also, Nagisa Oshima’s In the Realm of the Senses, which caused a furor in 1976. German authorities – who probably had better things to do (weren’t the Baader Meinhof running loose in those days?) – confiscated the film’s print and charged Berlin’s Forum sidebar director Ulrich Gregor with disseminating pornography. Now, didn’t that make the world a safer place?

The “Play it Again …!” series will take place at the CinemaxX theater in Potsdamer Platz and at the Zeughauskino. The complete retrospective program will be available at by mid-January.

Don Sharp: Psychomania + The Kiss of the Vampire Director