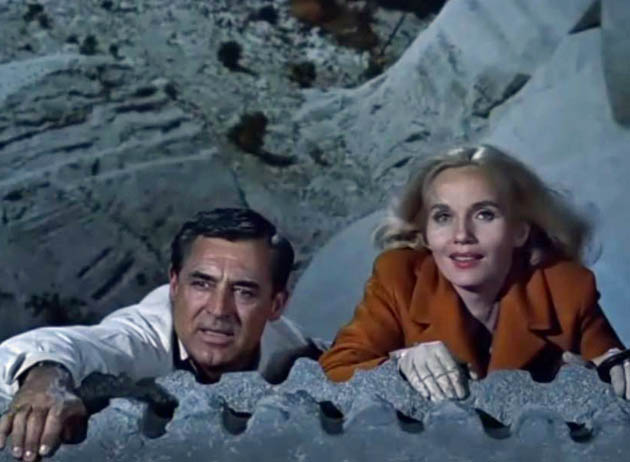 Art director/production designer Robert Boyle (a.k.a. Robert F. Boyle) – a veteran with nearly 100 film credits, ranging from Ma and Pa Kettle at Home to Portnoy’s Complaint, and best known for his collaborations with Alfred Hitchcock – will receive an Honorary Oscar at the 2008 Academy Awards ceremony on Feb. 24. The award will be handed to the 98-year-old (born Oct. 10, 1909, in Los Angeles) “in recognition of one of cinema’s great careers in art direction.”

Boyle, the subject of Daniel Raim’s Oscar-nominated documentary short The Man on Lincoln’s Nose (2000), has been shortlisted for four Academy Awards in the Best Art Direction category: Hitchcock’s North by Northwest (1959), Norman Jewison’s Gaily, Gaily (1969) and Fiddler on the Roof (1971), and Don Siegel’s The Shootist (1976).

In addition to North by Northwest, Boyle collaborated with Hitchcock on several other projects. He was an associate art director on Saboteur (1942) and Shadow of a Doubt (1943), and was the production designer on The Birds (1963) and Marnie (1964).

Trained as an architect, but unable to find a job during the Great Depression, Robert Boyle attempted to eke out a living as a film extra. His luck changed in 1933, when was hired as a draftsman at Paramount’s art department, then headed by Hans Dreier.

Boyle worked on numerous films as a draftsman, sketch artist, and assistant art director before becoming a full-fledged art director at Universal in the early 1940s (e.g., Flesh and Fantasy, White Savage).

In addition to the movies mentioned further up, his screen credits, whether as an art director or production designer, include the following:

The 2008 Academy Award nominations will be announced on Tuesday, Jan. 22, at 5:30 a.m. Pacific Time. More information can be found on their website.

No Country for Old Men with Anton Chigurh a.k.a. Javier Bardem: Do critics groups’ awards season lists deserve the attention of film lovers? This awards season, Joel and Ethan Coen’s No Country for Old Men has been the most frequent Best Film pick of most U.S.-based critics groups. The violent thriller is also the current front-runner for the Best Picture Academy Award.

Critics’ picks: At their best a great antidote against mainstream braindeadness

Should U.S. critics groups be considered snobbish because this awards season, for instance, they have been selecting No Country for Old Men as the year’s Best Film, Julie Christie as Best Actress for Away from Her, and Daniel Day-Lewis as Best Actor for There Will Be Blood?

Call them what you will, but these critics’ awards actually do help the films that most need this sort of publicity – or, for that matter, any sort of publicity: the smaller movies whose distributors don’t have the means – or, at times, the inclination – to promote them.

Admittedly, film critics awards won’t make Wild Hogs, Jackass, and Knocked Up fans go out of their way to take a look at I’m Not There, The Diving Bell and the Butterfly, or Persepolis. Most of these moviegoers, if they can read at all, don’t bother reading film reviews or critics’ year-end picks.

That said, many other moviegoers who had never heard of the lesser-known names found on the various critics groups’ lists may decide to buy a ticket or rent a DVD so as to watch Julie Christie deliver a marvelous performance as a woman suffering from Alzheimer’s, or check out Marjane Satrapi and Vincent Paronnaud’s humorous take on Iran’s Islamic revolution.

Indeed, critics have always helped to create box office buzz around films that otherwise would never have found an audience. Examples from decades past include Ingmar Bergman’s Cries & Whispers and Fanny and Alexander, Federico Fellini’s 8½, Michelangelo Antonioni’s Blow-Up, John Cassavetes’ A Woman Under the Influence.

At least partly as a result of their enthusiastic critical reception, these titles and others like them went on to garner multiple Academy Award nominations and, relatively speaking, hefty revenues.

Just in the last decade or so, critics’ raves and year-end awards have helped to create box office hits out of “uncommercial” fare as diverse as Mike Leigh’s Secrets & Lies, Alexander Payne’s Sideways, and Ang Lee’s Brokeback Mountain.

On the downside, a large number of U.S. critics have actually forgotten they write for adults and not for the 12-year-olds for whom most Hollywood movies are produced.

In fact, generally speaking, even their best-of-the-year choices seem to be focused on which names may have a chance to land an Oscar nod so their particular critics’ group won’t seem too esoteric – and thus irrelevant to both the mainstream media and the public at large.

That probably explains why so few “experimental,” really obscure, and/or non-English-language productions, no matter how outstanding, end up on U.S. critics’ awards lists.

For instance: thus far, despite a number of rave reviews earlier in the year, veteran Alain Resnais’ “experimental,” really obscure (in the U.S.), French-language – and brilliant – romantic drama Private Fears in Public Places has been completely ignored by U.S.-based critics’ groups in every category.

Of course, exceptions to that rule do pop up every now and then, such as this year’s several wins for Julian Schnabel’s French-language The Diving Bell and the Butterfly and for Marion Cotillard’s performance as Edith Piaf in Olivier Dahan’s La Vie en Rose.

Yet while populist critics’ personal essays both lift up and put down the ignored and ignorant masses, awards season’s critics lists should be looked at with interest. Despite their Oscar bent and groupthink approach to their selections, U.S. critics’ year-end choices often give movie fans the chance to discover big and small gems that otherwise would have been overlooked.

The Beast with a Million Eyes: Roger Corman Beats Alfred Hitchcock with Nature vs. Humans Thriller