Alice in Wonderland (2010) Movie Review: One of Tim Burton’s Worst 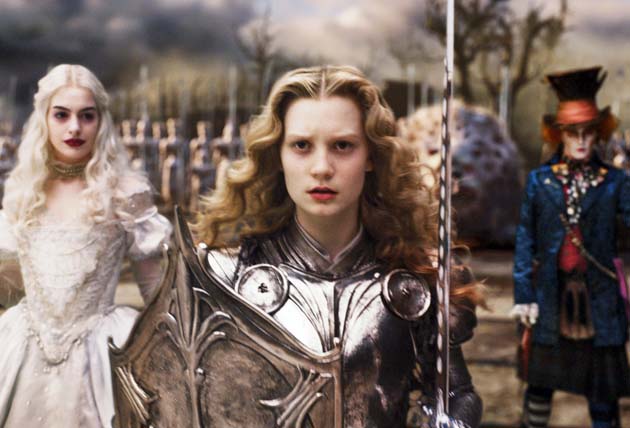 Alice in Wonderland 2010: Plenty of visuals, no substance

In the interest of full disclosure, I should start this commentary on Alice in Wonderland by saying that I have never been a fan of Tim Burton’s works. I’ve enjoyed a couple of his movies, but the vast majority of them I’ve found uninspiring and, really, quite boring. Burton’s eye for unusual worlds, particularly in terms of art direction and costume design, is not lost on me. But how can I possibly find Tim Burton a great director when he continues to offer the same tricks, over and over again?

True, Burton’s stories and characters change from movie to movie. What he offers, however, does not. What’s there beyond cool visuals? What’s there beyond the neo-gothic atmosphere he offers in Batman, or the brilliantly rendered chocolate factory playhouse in Charlie and the Chocolate Factory? What substance does he bring to his films?

Ironically, Burton’s most financially successful movie to date also happens to be one of his worst: Alice in Wonderland is a travesty that offers nothing in the way of substance, while constantly teasing the audience with what could have been. The insight and magic found in Lewis Carroll’s books are completely lost not only on Burton, but on his entire team. And I’m not sure the film’s visuals provide any sort of substitute, either.

‘Alice in Wonderland’: Alice the Savior in Wonderless ‘Underland’

As the movie starts out, Alice (Mia Wasikowska) is 19 years old and about to get married. From that very moment I realized I wasn’t about to watch a retelling of Lewis Carroll’s story, but rather something inspired by it.

Later on, at her wedding party Alice notices a white rabbit in a blue waistcoat and chases after it. As to be expected, she falls into the rabbit hole and finds herself in Wonderland – or rather, Underland as the inhabitants of that world call it.

The story then takes an even weirder turn, losing itself in its own muddle. From what I could gather, there is some kind of legend in which an “Alice” is supposed to kill the Jabberwocky, remove the Red Queen (Helena Bonham Carter) from power, and restore Underland’s rightful ruler, the White Queen (Anne Hathaway). Adding to the confusion, no one knows if Alice is the Alice.

The Lord of the Rings for children

Conveniently, Alice suffers from amnesia; she can’t remember who she is. But do we have any doubts? That makes the character’s rush to put the puzzle pieces in place rather pointless. The audience knows the outcome before it’s even begun, so why continue watching?

Perhaps so we can see poor recreations of the most famous characters from both Lewis Carroll’s tale and Walt Disney’s 1951 animated film, thrown together in a story that follows the most basic tenants of cliched fantasy. Think The Lord of the Rings for children and those with an IQ around 70.

Among others, there are Tweedledee and Tweedledum (Matt Lucas), the Cheshire Cat (Stephen Fry, in a role far beneath his talents), and the Mad Hatter (Johnny Depp), whose part has been absurdly bloated to accommodate not only Johnny Depp’s stardom, but Tim Burton’s obsession with the actor as well. (Just look at the poster for the movie; it’s Depp as the Mad Hatter, not Mia Wasikowska as Alice.)

The one character I didn’t find tedious was the Caterpillar, if only because Alan Rickman’s voice has a magical quality to it.

Alice in Wonderland 2010 with Mia Wasikowska as Alice, Anne Hathaway as the White Queen and Johnny Depp as the Mad Hatter.

Personally, I couldn’t care less if Alice ever found the Vorpal Sword or if Underland was to ever free itself of the Red Queen. Why should I? If there was a reason to care, neither Tim Burton nor screenwriter Linda Woolverton gave me any hint as to why.

I mean, would it surprise anyone that Alice in Wonderland ends with an “epic final battle”? If you feel I just spoiled something for you, I can only suggest that you watch more movies.

Compounding matters, the film’s visuals are unimpressive. Perhaps I felt that way because shortly before Alice in Wonderland I saw James Cameron’s Avatar, which gave me a living, breathing, and beautiful world. But then again, I think my impressions go deeper than that. For one, Burton relies heavily on CGI and green screens that, for lack of a better word, just look bad.

Alice in Wonderland may have looked better in 2D as it was shot in that format, but I saw the 3D version in theaters. Not surprisingly, the 3D effects didn’t feel at all natural; in fact, they felt like a complete afterthought (which they were).

The creature designs were just as uninspired, e.g., the Bandersnatch was merely a giant dog, while the Jabberwocky was a pretty routine dragon. The one creative element I thought I could rely on Burton for – engaging visuals – are missing from Alice.

But what makes Tim Burton’s Alice in Wonderland not only frustrating but borderline insulting is how a few of its scenes give us a hint at the movie we could have been watching: a fascinating retelling of Lewis Carroll’s story.

In one sequence, after Alice’s amnesia finally wears off, we get to see a few moments directly taken from Carroll’s original: Alice as a child and her first trip into Wonderland; her first meeting with some of the tale’s iconic characters; her experiencing several events we’ve come to know. Besides, we get a glimpse of the innocent Alice as she explores an unknown and mysterious world. In Burton’s film, we get instead a warrior princess who wields a sword and fights a dragon.

After watching Alice in Wonderland, I longed for either a simple live-action retelling of the original story or an entirely different story altogether. Instead of Burton’s and Woolverton’s tale, I would have much preferred to just watch Alice cope with life after Wonderland. Burton was on track to bring us that; for instance, the strange, visually intriguing wedding party sequence, as an uncomfortable Alice feels put upon by societal pressures. But then Alice falls down the rabbit hole. What a disaster.

Tim Burton and the Disney studios had a deal with Alice in Wonderland. For years, Burton had been trying to secure funding for his project Frankenweenie; Disney agreed to fund it if he agreed to direct Alice. It’s obvious the filmmaker’s heart isn’t in it. When one looks at one of his better efforts, e.g., Edward Scissorhands, like it or not it’s obvious that he cares about the material. Looking at Alice in Wonderland, it’s just as obvious that he doesn’t.

Eventually, Alice in Wonderland went on to gross over $1 billion worldwide; Burton, for his part, has been working on his pet project. It worked out for Disney; it worked out for Burton. The only losers were those who should have benefited the most: the audience.

I found little to enjoy in Tim Burton before the 2010 Alice in Wonderland. I think I’ve given up on him for good after it.

Image of Mia Wasikowska as Alice, Anne Hathaway as the White Queen, and Johnny Depp as the Mad Hatter in Alice in Wonderland 2010: Walt Disney Productions.

Are you kidding me? I know it wasn’t as dark as most Tim Burton films, or may not even feel like a Tim Burton film, but at least this was amusing to watch than Dark Shadows. The performance of Johnny Depp is so far been better than what he been for a while. And less not least forget that Mia Wasikowska and Anne Hathaway were very impressive showing how important it was and the visual of Alice in wonderland were way cooler than anything of Inception, Harry 7, and Hereafter put together.