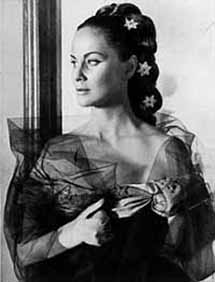 Valli looked considerably older, her features hardened, when she resumed her career in 1957. That year, she appeared in three productions: Glauco Pellegrini’s Spanish-Italian L’Amore più bello (The Most Beautiful Love), about the adventures of a small Italian boy in search of his mother; Michelangelo Antonioni’s Il Grido / The Cry, with Valli setting the plot in motion as the woman who leads Steve Cochran to his self-destruction; and Gillo Pontecorvo’s first feature film, the Franco-Italian social drama La Grande strada azzurra / The Wide Blue Road, in which Valli plays the wife of Yves Montand’s doomed fisherman.

She was well received as a woman of the world who befriends Anthony Perkins in René Clément’s This Angry Age / The Sea Wall (1958), and was remarkable as a mad surgeon’s even madder accomplice in Georges Franju’s Les Yeux sans visage / Eyes Without a Face (1960). In that haunting horror film, Valli helps Pierre Brasseur perform an unusual cut-and-paste job: the doctor slices off the facial features of pretty young women so he can graft them onto his daughter’s deformed face.

Valli’s roles were relatively small in most of those films. Though only in her mid-30s, the actress had rather rapidly turned into a matronly star supporting player. With sporadic exceptions, she would remain one – oftentimes in international co-productions – for the rest of her career. Her films, like her roles, would be mostly secondary endeavors interspersed with the occasional big-budget or prestige production. Only about ten years had elapsed since her Hollywood days, but one would be hard pressed to find many similarities between the harsh, stern-looking Valli of La Grande strada azzurra and Les Yeux sans visage, and the glamorous star of The Third Man and Walk Softly, Stranger.

Her notable films during that period include Roger Vadim’s Les Bijoutiers du clair de lune / The Night Heaven Fell (1958), as Brigitte Bardot’s aunt; Philippe Agostini and Raymond Leopold Bruckberger’s adaptation of Gertrud von le Fort’s novel about Carmelite martyrdom during the French Revolution, Le Dialogue des Carmélites (1960), in which Valli plays the Mother Superior opposite Jeanne Moreau; and Henri Colpi’s Une aussi longue absence / A Very Long Absence (1961), in which she plays a bar owner who suspects that an amnesiac tramp (Georges Wilson) may be the husband she had lost in the war. For that performance, Valli received some of the best notices of her career.

In the early 1960s, she married her former stage director Giancarlo Zagni (the marriage would last until 1970) and moved to Mexico for three years. Besides appearing in local television fare, she continued to work in – mostly undistinguished – international feature-film productions, some of which were shot in Mexico or South America. One exception was Ismael Rodríguez’s Mexican-made El Hombre de papel / The Paper Man, for which Valli received a Best Actress (Drama) Golden Globe nomination.

She also supported Rita Hayworth and Rex Harrison in the flop The Happy Thieves (1962); was the widow of a martyr in Leopoldo Torre Nilsson’s Franco-Argentinian-Brazilian drama Homenaje a la hora de la siesta / Homage at Siesta Time (1962); played Gertrude in Ophélia (1963), Claude Chabrol’s unusual take on Hamlet; and took part in a love triangle that also included Richard Johnson and Annie Girardot in François Villiers’ L’Autre femme / The Other Woman (1963). In 1964, she was made a Chevalier des Arts et des Lettres by France’s Minister of Cultural Affairs André Malraux.

During a lull in her feature-film career, Valli did guest stints on American television, where she could be seen in mid-decade in the TV series Combat and in “Rome Will Never Leave You,” a special three-episode showing of Dr. Kildare in which she was cast as an old flame of Raymond Massey’s Dr. Gillespie.

Her film activity slowed down dramatically during the second half of the 1960s, and according to David Shipman there were reports that the actress was going through a difficult period in her private life. Her only film appearance of note at that time was in a small role – as Merope – in Pier Paolo Pasolini’s raw take on Greek mythology, Edipo Re / Oedipus Rex (1967).

Valli, however, did keep busy onstage. In 1966, she played Ruth Gray in John Osborne’s Epitaph for George Dillon, and the following year she co-starred with Raf Vallone – with whom she formed a small “company” – in Arthur Miller’s A View from the Bridge. The duo was subsequently reteamed in La Bambolona, which Vallone adapted (from Alba de Cèspedes’ novel) and directed. In 1969, she appeared as Myriam in Alberto Moravia’s Il Dio Kurt and as Leonie in Jean Cocteau’s Les Parents terribles. During that time, she could also be seen on Italian TV as a presenter of the show Music-Rama, and as Millie Crocker-Harris in an adaptation of Terence Rattigan’s The Browning Version.

Valli resumed her film career at the turn of the decade, and would remain active – making about one or two feature films a year – for the next 25 years. She began the 1970s with a bang, starring in Bernardo Bertolucci’s Strategia del ragno / The Spider’s Stratagem (1970), a political drama from a story by Jorge Luis Borges that was made for Italian TV but was shown in theaters abroad. In a performance called “magnificently strong” by Time magazine, Valli plays a mother concealing from her son that his father was not a hero killed by the Fascists in the 1930s.

Two years later she had a supporting role in Valerio Zurlini’s La Prima notte di quiete / The Professor, starring Alain Delon, Giancarlo Giannini, and Lea Massari; and later in the 1970s, she had small parts in two other Bertolucci films, 1900 (1976) and La Luna (1979). For Patrice Chéreau, she played a madwoman in Le Chair de l’orchidée / Flesh of the Orchid (1975), with Charlotte Rampling, Simone Signoret, and Edwige Feuillère; and had another good part in Cesare Zavattini’s adaptation of Gustave Flaubert’s Un Cuore semplice / A Simple Heart (1978), directed by Giorgio Ferrara, and starring Andy Warhol’s muse Joe Dallesandro.

During the 1970s, Valli also remained active on both television and the stage. On Italian TV, she appeared in a 1971 adaptation of Jean Cocteau’s The Typewriter, and the following year played Christine Mannon in Eugene O’Neill’s Mourning Becomes Electra. Also in 1972, she acted for Patrice Chéreau in two stage productions: Frank Wedekind’s Lulu / Pandora’s Box at Milan’s Piccolo Teatro di via Rovello, playing the Countess Geschwitz, and Christopher Marlowe’s The Massacre at Paris at Lyon’s Théâtre National Populaire, playing Caterina de Medici. Later in the decade, she reprised the latter role in Le tumulte d’Amboise (1978), made for French television.

Most of Valli’s professional output during that decade, however, was markedly less prestigious than the aforementioned film, TV, and stage titles. Her large eyes and her now forbidding mien made the actress ideal casting in the cheap, blood-soaked, European horror films made in those days. (The Italian examples of this genre – many of which were The Exorcist rip-offs – were known as “gialli.”) Those included Mario Caiano’s Occhio nel labirinto / Eye in the Labyrinth (1972); Mario Bava and Alfredo Leone’s La Casa dell’esorcismo / Lisa and the Devil (1973), starring Telly Savallas and Elke Sommer; Alberto De Martino’s L’Anticristo / The Antichrist (1974), with Carla Gravina; and the gory Suoromiciddi / Killer Nun (1978), with Anita Ekberg as a demented morphine-addicted nun, and Joe Dallesandro as a doctor.

But at least once in the 1970s, Valli was cast in an offbeat horror gem. She nearly stole the show in Dario Argento’s striking 1977 gothic piece Suspiria, in which she and Hollywood veteran Joan Bennett play witches out to get Jessica Harper. She also had a role in Argento’s gorier and much weaker Inferno (1980), plunging to her death engulfed in flames.

Valli continued working in mostly supporting roles throughout the 1980s and 1990s. She was the Marchesa Maironi in a 1983 television remake of her old success, Piccolo mondo antico, directed by Salvatore Nocita; the haughty old lady with the priceless literary letters in Aspern (1985), Eduardo de Gregorio’s adaptation of The Aspern Papers; and had a good role in Giuseppe Bertolucci’s 1985 drama Segreti Segreti / Secrets, Secrets. (She worked with Bertolucci – Bernardo’s brother – in six films.) Additionally, she won a Best Supporting Actress David di Donatello Award for her performance in Marco Tullio Giordana’s La Caduta degli angeli ribelli / The Fall of the Rebellious Angels (1981).

In 1982, the 61-year-old actress was honored with the title Cavaliere della Repubblica Italiana. That same year, she won one of several awards for her stage work: The Italian theater critics’ Ennio Flaiano Award for her performance as Anzola in Anonimo del Cinquecento’s play La Venexiana.

She was excellent as Carla Gravina’s concerned mother in Margarethe von Trotta’s 1993 anti-political apathy thriller Il Lungo silenzio / The Long Silence, and had notable roles in other productions of the 1990s. Among those were Alessandro Benvenuti’s sociopolitical comedy-drama Zitti e Mosca / The Party’s Over (1991); Sergio Martino’s star-packed TV miniseries Delitti privati / Private Crimes (1992); and John Irvin’s A Month by the Lake (1995), a period romance based on an H. E. Bates story, and starring Vanessa Redgrave, Uma Thurman, and Edward Fox.

In 1991, at the age of 70, Valli was awarded a Career David di Donatello. Five years later she, along with screenwriter Luciano Vincenzoni, director Franco Zeffirelli, and composer Piero Piccioni – he of the Montesi scandal – received a Flaiano d’Oro Career Award. The following year, she was honored with a Career Golden Lion at the Venice Film Festival.

While not making movies or being honored with one acting award or another, Valli acted onstage. She played the mother in Jean Genet’s Paravents (1990) at Bologna’s Teatro Testoni; Mrs. Violet Venable in a production of Tennessee Williams’ Suddenly Last Summer (1991), also at the Teatro Testoni; and Deborah in Eugene O’Neill’s More Stately Mansions (1993) at Rome’s Teatro dei Satiri. Her last two stage appearances were in Luigi Pirandello plays: as Signora Frola in Così è se vi pare / Right You Are If You Think You Are (1994), under the direction of filmmaker Mauro Bolognini, and as the Generala in Questa sera si recita a soggetto / Tonight We Improvise (1995).

Reportedly a very shy woman, Alida Valli disliked talking about the past, refusing frequent requests to discuss The Third Man. “I never think about the past. Or about the future,” she asserted a while back. “If they force me to return to the past, I say that that’s me, the one from yesterday, the living example of the times I’ve known. But I live in the present, with all the inconveniences of old age, and with my eyes covered.”

Her death at her home on April 22, was announced by the office of the mayor of Rome, Walter Veltroni, whose statement read, “The Italian cinema has lost one of its most intense and striking faces.” A few days later, Valli was buried at Rome’s Verano Cemetery.

“I had so much, but I’ve also had to pay the price,” Valli said not too long before her death. “Maybe I have gotten more than I gave.”

I saw her during the 1960’s, and I always thought she was a beautiful mysterious lady.