Amateur home movies’ stars: Roddy McDowall during the filming of George Stevens’ The Greatest Story Ever Told (top); Norma Shearer on the set of Romeo and Juliet (bottom).

Amateur home movies featuring Clark Gable, Cary Grant, Ginger Rogers, Marilyn Monroe, and other Hollywood celebrities, along with behind-the-scene activities on the sets of films such as On the Waterfront and The Misfits will be screened at the Academy of Motion Picture Arts and Sciences’ “Monday Nights with Oscar” presentation of “Hollywood Home Movies: Treasures from the Academy Film Archive” on Monday, Aug. 11, at 7 p.m. at the Academy Theater in New York City.

The program will include introductions and commentaries by family members of Humphrey Bogart and Lauren Bacall, Gary Cooper, Douglas Fairbanks Jr., and Steve McQueen.

The evening will feature rarely seen footage of Alfred Hitchcock playing with his baby daughter, Bogart and Bacall sailing on the Santana, and Academy Award-winning art director (and Oscar statuette designer) Cedric Gibbons and his wife Dolores del Rio entertaining guests, including Cooper and Marlene Dietrich, at a backyard party. Additionally, the program will show early home movies of New York Harbor from 1927, a beauty contest parade in Atlantic City from 1935, and Times Square in the mid-1950s.

“Hollywood Home Movies” is curated by Academy Archivist Lynne Kirste and is presented in conjunction with ongoing 2008 Home Movie Day events around the world.

Tickets for “Hollywood Home Movies” are $5 for the general public and $3 for Academy members and students with a valid ID. Tickets may be reserved by calling 1-888-778-7575. Depending on availability, tickets may be purchased in person on the night of the screening. Doors open at 6:30 p.m. All seating is unreserved. The Academy Theater is located at 111 East 59th Street in New York City.

Pictured: Roddy McDowall while appearing in George Stevens’ The Greatest Story Ever Told (1965), and Norma Shearer on the set of Romeo and Juliet (1936). 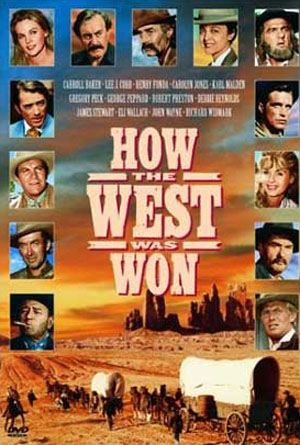 In Variety, John Dempsey reports that Warner Bros. has remastered – at a reported “healthy seven figures” – MGM’s Academy Award-nominated Western How the West Was Won (1963), which was originally shot in the three-panel Cinerama format.

The film is composed of five separate segments directed by John Ford (“The Civil War”), Henry Hathaway (“The Rivers,” “The Plains,” and “The Outlaws”), and George Marshall (“The Railroad”). An uncredited Richard Thorpe handled the transitional historical sequences. James R. Webb penned the screenplay, which was “suggested” by a series of articles published in Life.

Needless to say, I’ve seen How the West Was Won only in its truncated format, with clearly visible “join lines” and somewhat faded color. Considering that neither the film’s storylines nor the performances are what one would call impressive, watching How the West Was Won minus its original aesthetic grandeur wasn’t the greatest of cinematic experiences, to put it mildly.

The restored version has been sold for an exclusive run on the Starz network Encore Westerns. It will premiere on August 30, along with a letterbox version on Encore HD on Demand. The Blu-ray DVD of the new version will come out on September 9.

That same day, the Cinerama Dome in Los Angeles will screen the original version, with three projected images on three separate screens. 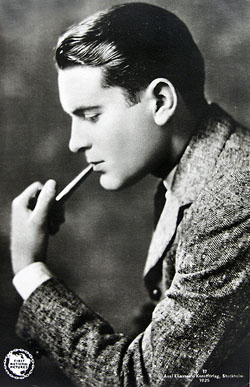 “Spend 5 days in the dark this Labor Day weekend at Cinecon 44,” suggests the Cinecon website. That sounds like a very good idea, indeed.

First of all, the American Cinematheque’s (website) Egyptian Theatre on Hollywood Blvd. has a good air-conditioning system. Second, the seats are quite comfortable. Third, the screen and projection are first-rate. And last – but definitely not least – each year at Cinecon you get numerous one-in-a-lifetime chances to see rarities of the sort that make your usual cinematic rarities seem commonplace.

For instance, where else but at Cinecon (see full 2008 schedule below) will you get the chance to watch the 1929 early talkie courtroom drama Acquitted, starring handsome Lloyd Hughes (right) and Margaret Livingston, that lustful homewrecker who almost destroys the idyllic happiness of George O’Brien and Janet Gaynor in F.W. Murnau’s Sunrise?

Where else but at Cinecon will you get the chance to watch Heather Angel (remember her? No? You’re not the only one) and Victor Jory (remember him? Never mind…) in the “steamy tropical drama” Murder in Trinidad, released in 1934, just as the Production Code was tightening its stranglehold around the neck of the American film industry?

Where else but at Cinecon will you get the chance to watch Damon and Pythias, a 1914 silent drama directed by Otis Turner, the “Dean of film directors,” and starring Herbert Rawlinson, one of the most popular stars of the early days of cinema. (I won’t ask you if you remember Rawlinson.) I should add that Damon and Pythias, as per the Cinecon release, was the first feature completed at Universal City, behind the hills north of the Los Angeles basin.

You get the picture…

Now, who cares about those old, dusty, forgotten films and stars and directors and plots? Well, how about those curious to learn more about (mostly) American culture in the first half of the 20th century? Or those who enjoy making new – and at times quite enjoyable and/or eye-popping and/or challenging – discoveries? Or those who appreciate the craftsmanship and talent involved in the making of those “old, dusty, forgotten” films, which are undeniably old, but whose dusty-ness and forgotten-ness are the result of our culture’s utter disregard for the past – no matter how relevant to our present.

The 1922 Tom Mix Western Sky High, which, Cinecon tells us, is “the picture that established Mix’s reputation for tongue-in-cheek action romps.” In this one, Mix has to deal with human trafficking along the US-Mexican border. Shot at the Grand Canyon, Sky High features “hair raising aerial stunts.”

Several reels of the newly restored (though incomplete) Triumph, a 1917 drama with Lon Chaney, Dorothy Phillips (a major star at the time), and William Stowell. Directed by Joseph De Grasse.

UCLA’s recent restoration of Tillie’s Punctured Romance (1914), which is supposed to be the first feature-film comedy ever made. Charles Chaplin, Mabel Normand, and Marie Dressler star. Mack Sennett directed.

The Poor Nut, a 1927 campus comedy with the charming Jack Mulhall, plus Charlie Murray, Glenn Tryon, and a very young Jean Arthur.

The Mollycoddle, a 1920 comedy with Douglas Fairbanks at his most likable. I’ve always found Fairbanks much too flamboyant and hammy, but in The Mollycoddle he is excellent as an effete gentleman who unexpectedly becomes a hero. I find this early comedy – directed by Victor Fleming (of Gone with the Wind and The Wizard of Oz fame) – much more enjoyable than Fairbanks’ better-known (and generally better-liked) swashbuckling yarns. 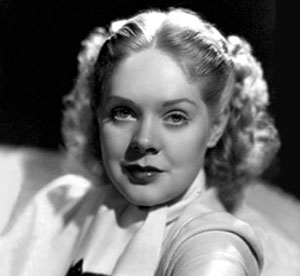 Also at Cinecon 2008: the lovely Alice Faye in Sing, Baby, Sing; the painful Al Jolson in the equally painful (two-strip Technicolored) Mammy; Charley Chase’s first feature, Modern Love (1929); the newly restored The Blood Ship, directed by George B. Seitz, and featuring Hobart Bosworth, Jacqueline Logan, and Richard Arlen; and the “uncut” version of The Eagle and the Hawk, an aviation drama starring Cary Grant and a highly effective Fredric March, in addition to Carole Lombard in a small role.

And more: the 1925 The Home Maker, a curious drama in which husband Clive Brook and wife Alice Joyce discover that strict gender roles aren’t all they’re cracked up to be; Outlaws of the Prairie, with hunky Charles Starrett; an early (and quite subdued) Bette Davis in the Columbia production The Menace; Paul Wendkos’ muckraking The Case Against Brooklyn; and the silent version of Frank Capra’s Rain or Shine.

And more: John Cromwell’s 1930 Western The Texan, starring Gary Cooper (as “The Llano Kid”) and Fay Wray; the 1917 drama The Devil’s Bait, starring 1910s serial superstar Ruth Roland, and featuring future director Henry King (he of The Song of Bernadette and Love Is a Many-Splendored Thing); another Gary Cooper Western, Anthony Mann’s 1958 Man of the West; Ernest B. Schoedsack’s Outlaws of the Orient, starring Jack Holt; and Ronald Colman’s last major star vehicle, Champagne for Caesar.

For information on day passes (no tickets for individual screenings are sold) go here.

I’ve replaced “three-screen” with “three-panel.” Thanks for pointing that out.

I saw the original Cinerama presentation of HTWWW several times in 1963, and I am attending the Sept.7,2008 showing at the Cinerama Dome in Hollywood. Allow me to make a slight correction. Only one screen is used (not three) with three synchronized projectors.