After debating whether to catch a late Tuesday night show at the Los Angeles Film Festival or just hit the sack early and catch more movies the day after, I finally decided to watch writer-director Mike Ott’s Analog Days, which revolves around a group of aimless twenty-somethings stuck in the dredges of Southern California: Newhall, to be exact, a right-wing desert town full of racists, anti-gay bigots, and assorted low-lives.

That may sound like a depressing time at the movies, except that Analog Days is anything but. Instead, Ott’s intelligent, funny, and quite moving feature-film debut presents an incisive but compassionate portrayal of young men and women who – rightly – feel that life is passing them by.

Although this low-budget film needs some sound work – I missed several bits of dialogue that made the narrative a tad confusing at times – and Ott’s camera set-ups are a little clunky here and there, Analog Days feels more real than a good many youth films out there. Particularly impressive is the director’s handling of his young and mostly inexperienced cast. The film’s five principals – Brett L. Tinnes, Granger Green, Ivy Khan, Ryan Johnsen, and Chad Cunningham – deliver remarkably naturalistic performances. And for once, here’s a youth film with a soundtrack that sounds as hip as it’s supposed to.

By the way, at the Q&A Mike Ott said that it’s unlikely that Analog Days will be screened in Newhall. 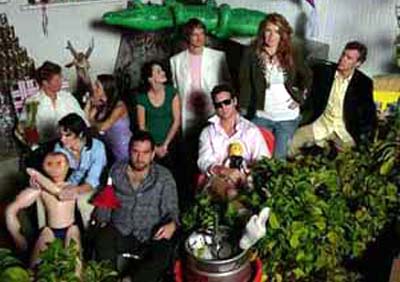 Last night, I watched Sarah Kelly’s The Lather Effect at the Los Angeles Film Festival. The theater was packed; considering the amount of whistles, squeals, and shouts – it was the film’s World Premiere – I assume many were friends of the director, producers, and actors involved in its making. Unfortunately, the air conditioning at the Mann Theater wasn’t working as well as it should have, which made for an uncomfortable viewing experience. (Image: The Lather Effect cast members, among them Peter Facinelli, Sarah Clarke, and Eric Stoltz.)

Sarah Kelly’s The Lather Effect, I’m sorry to report, didn’t help matters any. Co-written by Kelly and Tim Talbott, this ensemble comedy-drama is tantamount to a low-budget remake of Lawrence Kasdan’s 1983 box office hit and Best Picture Academy Award nominee The Big Chill. Revolving around a sort of private “high-school reunion,” The Lather Effect meanders aimlessly for an hour and a half, as its unappealing characters, most of them in their 30s and 40s but with the mindset of adolescents, drink, smoke pot, talk about sex and the difficulties of adult life, and reveal deep dark secrets from the distant past.

Those who got something out of The Big Chill – I didn’t – may enjoy The Lather Effect. Just remember that this is 2006, which means that The Lather Effect soundtrack is filled with greatest hits from the ’80s, instead of the ’60s and ’70s.

A version of this The Lather Effect review was initially posted in June 2006.

June 26 highlights at the Los Angeles Film Festival include:

Kelly Reichardt’s Old Joy at the Los Angeles Film Festival. Thus far, this has been one of the most unusual films Ive seen all year. Im not talking about bizarre camera angles or special photographic effects. Whats unusual about this well-acted (by Daniel London and Will Oldham), beautifully photographed (by Peter Sillen), and carefully directed slice of real life is its pacing. Without ever becoming tedious, the narrative flows at such a leisurely rhythm that at times I was having trouble staying awake. I repeat: I wasnt bored. But watching two Portland friends (and a dog named Lucy) go on a hiking trip to Oregons rain forest in order to relax in the local hot springs felt so real that I began feeling as at ease with life as Lucy. If youre looking for a Zen experience at the movies, Old Joy will definitely provide it. Yo La Tengos score, by the way, is excellent.

In the fall, Kino will be releasing Old Joy in the U.S., including at New York Citys Film Forum.