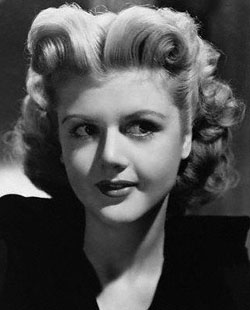 Angela Lansbury has her “Summer Under the Stars” day on Sunday, Aug. 23.

Thanks to the popular TV series Murder She Wrote, Angela Lansbury became a bigger star in the last two decades than she ever was during her heyday as an MGM contract player in the 1940s, supporting (or antagonizing) the likes of Katharine Hepburn, Judy Garland, Margaret O’Brien, and Elizabeth Taylor.

Ironically, most people today probably know who Angela Lansbury is, while names such as Lana Turner, Hedy Lamarr, and Greer Garson – three of MGM’s top stars of that era – have dimmed (at least) somewhat.

Turner Classic Movies’ Angela Lansbury Day will offer only one TCM premiere: A Lawless Street (1955), a minor Joseph H. Lewis Western starring Randolph Scott. It could be a forgotten masterpiece; it could be your usual 1950s oater.

Among those I’ve seen, I’d most recommend two: John Frankenheimer’s The Manchurian Candidate (1962, above, with Laurence Harvey) and Leslie Norman’s Summer of the Seventeenth Doll / Season of Passion (1959). The former is a paranoid thriller that is considered by many to be Frankenheimer’s masterpiece; the latter is an all-but-forgotten, often-derided drama set in Australia.

Now, here are my contrarian opinions:

As far as I’m concerned, Lansbury happens to be the best thing about The Manchurian Candidate, which I recommend solely because of its revered status among film connoisseurs. Her Mom from Hell is a marvelously creepy example of what mothers will do when they love both their sons and political power in equal amounts.

Unlike just about everybody else, overall I prefer Season of Passion to The Manchurian Candidate – at least partly because the former doesn’t have nearly as many plot holes or absurd twists as the latter. In fact, Season of Passion is just a simple, character-driven tale about two friends (Ernest Borgnine, John Mills) who hook up with two women (Lansbury, Anne Baxter) during one summer.

Adapted by John Dighton from Ray Lawler’s acclaimed play, nothing much happens in Season of Passion in terms of plot, but the characters at one point do have to come to terms with life and the passage of time. I believe that most of us will be able to relate to their plight, though purists will be bothered that not one of them speak English with an Australian accent. (For some reason, those things don’t bother me in old black-and-white movies; perhaps it’s because the black-and-white atmosphere is already in and of itself unrealistic.)

Back in Hollywood, Lansbury is fine in George Cukor’s Gaslight (1944) – though I’d say that the two best performances in this Gothic tale of murder and madness are those of Barbara Everest and Dame May Whitty – whereas she’s just okay as the young woman destroyed by soulless Hurd Hatfield (above) in The Picture of Dorian Gray (1945), which boasts some of the most elegant sets of any film of the studio era. Too bad that most of the performances in Albert Lewin’s well-made but cold drama are dwarfed by Cedric Gibbons and Hans Peter’s production design, and Edwin B. Willis’ decor. (Lansbury, by the way, was nominated for Best Supporting Actress Oscars for those two films and for The Manchurian Candidate.)

Vincente Minnelli’s handsomely mounted but vapid crowd-pleasing comedy The Reluctant Debutant (1958) – a modest money-loser despite solid grosses –  is as watchable as it is forgettable. In the role of a young American in London spending time with her wealthy father (Rex Harrison) and status-conscious stepmother (Kay Kendall), Sandra Dee, already showing signs of the sweet-looking rebelliousness that would become emblematic of her work in the ensuing couple of years, hooks up with a drummer of (allegedly) ill repute (John Saxon). Angela Lansbury was cast as Kendall’s ambitious friend Mabel.

Now, someone must unearth (in the US) Anthony Page’s The Lady Vanishes (1978), starring Elliott Gould and Cybill Shepherd, which is supposed to be so atrocious it’s unforgettable. (It’s available on DVD in Europe.)

And while that industrious individual is at it, how about also unearthing Harold Prince’s mordant Something for Everyone (1970), one of the unabashedly daring movies of the 1970s? (In the film, matriarch Lansbury and just about every other family member is seduced by Michael York’s unscrupulous social climber.)

8:00 AM All Fall Down (1962)
A young drifter’s romance with an older woman is threatened by his possessive mother. Cast: Warren Beatty, Eva Marie Saint, Angela Lansbury. Director: John Frankenheimer. Black and white. 110 min.

1:00 AM Season of Passion (1959)
Two men continue a traditional summer rendezvous only to discover that life has changed for them all. Cast: Ernest Borgnine, Anne Baxter, John Mills. Director: Leslie Noman. Black and white. 94 min.