Ann Savage, the blonde actress best remembered for playing the dark-haired femme fatale Vera in Edgar G. Ulmer’s 1945 B film noir Detour, died in her sleep on Christmas Day 2011 at the Motion Picture & Television Country House and Hospital in the Los Angeles suburb of Woodland Hills. Savage, who had recently suffered a series of strokes, was 87.

Featured in about 30 movies from 1943–1953, Ann Savage was a minor name even in her heyday, when she was almost invariably cast, whether as a lead or supporting player, in little-seen – and now largely forgotten – low-budget productions.

The one exception in her Hollywood career is Detour, a more elaborate effort from the short-lived, bottom-of-the-barrel Producers Releasing Corporation (PRC), known for making use of actors who had seen better days – e.g., Edmund Lowe, Jean Parker, Sally Eilers, Anna May Wong – and for its cheap cowboy, gangster, and horror flicks.

Chiefly thanks to Edgar G. Ulmer’s name – his other directorial credits include the art deco horror drama The Black Cat, and the noirs The Strange Woman and Ruthless – Detour, which failed to make much of a splash upon its release, began undergoing reevaluation in the 1970s and 1980s, eventually reaching cult film classic status. In fact, this PRC B film noir is better known and better appreciated today than many other bigger-budget noirs of that era.

As a result of numerous personal appearances at Detour screenings in the last quarter of a century, Ann Savage herself became a prominent cult movie actress – like Detour itself, better known and better appreciated today than at the time the film came out.

From Columbia, S.C., to Columbia Pictures

Ann Savage was born Bernice Maxine Lyon on Feb. 19, 1921, in Columbia, South Carolina. Her father was a former army man who, while working as a jeweler, kept moving around with his family. Some obits claim that he died while his daughter was still a small child, but Savage herself stated that he abandoned his family while they were living in Dallas.

In Savage Detours: The Life and Work of Ann Savage, authors Lisa Morton and Kent Adamson (Savage’s agent in recent years) explain that she last saw her father – in her words, “a mean bastard” – during a war bond selling tour in Mississippi in the mid-1940s.

With her father out of her life, the young Bernice Lyon ended up accompanying her newly remarried mother to Los Angeles. Later on, Bernice held two jobs to help with the family’s modest finances: days at Eastman Kodak, nights at a bowling alley, where the starstruck teenager learned of the (Max) Reinhardt School of the Theater. In order to pay for her tuition, she worked at the school’s administrative office.

Located on Sunset Boulevard in Hollywood, the Reinhardt school staged plays and scenes so as to attract the studios’ talent scouts. A production of Clifford Odets’ Golden Boy, with the now renamed Ann Savage in the Frances Farmer (stage)/Barbara Stanwyck (film) role, led to screen-test offers from 20th Century Fox and Columbia Pictures.

The light-haired Savage opted for the latter studio, as she was told “there were too many blondes at Fox,” in the early 1940s the domain of Alice Faye, Betty Grable, Sonja Henie, and Carole Landis.[1]

At Columbia, Ann Savage was tested opposite B Western actor Tom Keene. She was given a contract and, somewhat surprisingly, got along well with the widely despised studio head Harry Cohn, recalling, “he was very nice to me.”

Savage got her first chance in Michael Gordon’s 1943 Lone Wolf crime comedy One Dangerous Night, a B release toplining Warren William and Marguerite Chapman. Fifteen more roles would follow in the next couple of years, ranging from a bit in George Stevens’ eventual Best Picture Oscar nominee The More the Merrier to more significant parts in B movies. 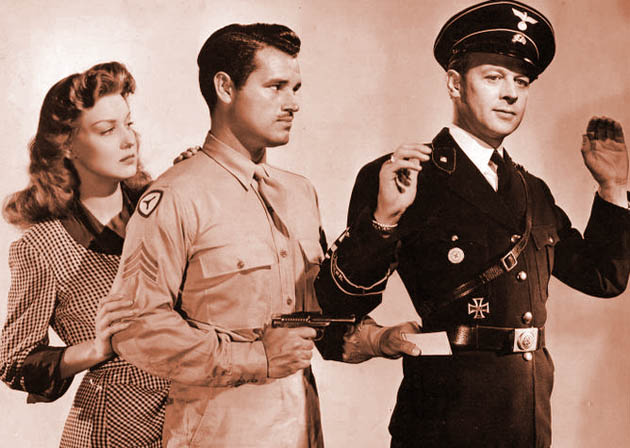 The Unwritten Code with Ann Savage, Tom Neal, and Roland Varno. An anti-Nazi B thriller, Herman Rotsten’s The Unwritten Code was one of three Columbia releases featuring Ann Savage and her future Detour leading man Tom Neal. The plot revolves around an evil Nazi (Dutch actor Roland Varno) taking on the identity of the British interpreter (Morton Lowry) he has murdered. Savage plays a nurse caring for the impostor, while Neal is her sergeant fiancé.

In general, Ann Savage’s bigger roles were unrewarding, as her Columbia career lagged far behind those of other early 1940s up-and-comers such as Janet Blair (starring opposite Cary Grant in Once Upon a Time three years after landing a contract) and Evelyn Keyes (who, the year after arriving at the studio, had gone from minor supporting player to getting cast as Robert Montgomery’s leading lady in Here Comes Mr. Jordan).

Even Columbia’s young B actresses such as Nina Foch, Jeff Donnell, and Jane Frazee were cast in more memorable roles in better-received efforts, while Savage found herself stuck in what often amounted to non-roles in mostly ignored low-budget fare. For instance:

In addition, while Nina Foch was getting featured opposite Bela Lugosi in the cult B classic The Return of the Vampire, Savage – going (for a while) from blonde to redhead – was supporting Penny Singleton and Arthur Lake in the Blondie series entry Footlight Glamour (1943).

Better known for his B horror movies of the 1950s and 1960s, William Castle (House on Haunted Hill, The Tingler) directed the Alaska-set B “Northwestern” Klondike Kate (1943), worth mentioning because it marked the first time Ann Savage, donning a pompadour à la Ann Sheridan in Shine On Harvest Moon,[3] was cast opposite her future Detour leading man.

A former amateur boxer and minor Metro-Goldwyn-Mayer contract player (Another Thin Man, Four Girls in White), Tom Neal became a Columbia up-and-comer the same year as Ann Savage, being featured in four of the studio’s 1943 releases.

Two more Savage-Neal pairings, both anti-Nazi B spy thrillers, would come out the following year: Two-Man Submarine and The Unwritten Code.

But no matter how Harry Cohn and/or Columbia’s casting directors saw them, Savage and Neal weren’t exactly an ideal match. Even as B movie couples went, they made little impression back in the day (except, as it would turn out, on Detour producer Leon Fromkess). And then there were the on-set confrontations.

“He was a troublemaker,” Savage would reminisce to Western Clippings interviewer Michael G. Fitzgerald. “The only one I had problems with in all the years I was in movies.”

By late 1944, it looked like Ann Savage’s future would offer no more opportunities for pairings with Tom Neal.

With the studios curtailing their B releases in favor of fewer but costlier productions, and with no major prospects for their redheaded, unconventionally pretty contract player, Columbia – which already had its own redhead, Rita Hayworth – abruptly dropped a chagrined Savage.

“I wasn’t fired, or dismissed … I wasn’t anything,” she would remark decades later. “I received a little note in my paycheck that it was the final one.”[4]

Regarding her roles during that period, she told the Los Angeles Times in 1985, “They were mindless. The actresses were just scenery. The stories all revolved around the male actors; they really had the choice roles. All the actresses had to do was to look lovely, since the dialogue was ridiculous.” 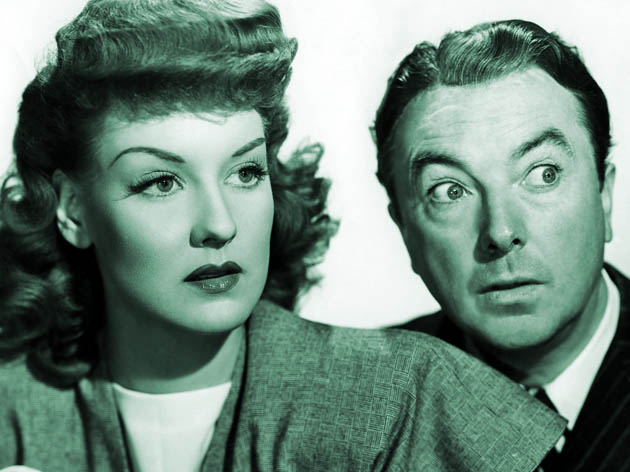 Ann Savage in Scared Stiff, with Jack Haley. A Paramount Pictures release – by way of its Pine-Thomas B unit – Frank McDonald’s Scared Stiff is a mystery comedy that failed to boost the careers of Ann Savage, Jack Haley (the Tin Man in The Wizard of Oz), or anybody else involved in this low-budget production. Apart from a few similarities – a pretty heroine, a bumbling hero, criminals, humor – there isn’t an actual connection between this Scared Stiff and the 1953 comedy of the same name, starring Dean Martin, Jerry Lewis, and Lizabeth Scott, and itself a remake of the 1940 Bob Hope-Paulette Goddard hit The Ghost Breakers.

In 1945, Ann Savage spent a brief stint at Paramount Pictures’ Pine-Thomas B unit, earning $750 a week (up from $150 at Columbia)[4] for her work in Frank McDonald’s mystery comedy Scared Stiff and William C. Thomas’ crime comedy Midnight Manhunt.

As offers weren’t pouring in, she then signed a two-picture deal with the minor Producers Releasing Corporation, an unlikely place for her to land what would turn out to be the most renowned role of her career.

[2] On the big screen, Josephine Hutchinson (1903–1998) is best remembered for playing the wives of two revolutionary characters in movies of the 1930s: Marie Pasteur opposite Paul Muni’s Dr. Pasteur in William Dieterle’s The Story of Louis Pasteur (1936), and Elsa Frankenstein opposite Basil Rathbone’s Baron Wolf von Frankenstein in Rowland V. Lee’s Son of Frankenstein (1939).

On the Broadway stage, among Hutchinson’s most noteworthy roles were Anya in two productions (1928, 1933) of Anton Chekhov’s The Cherry Orchard, Nichette in a 1931 revival of Alexandre Dumas fils’ Camille, Wendy in a 1928 revival of J.M. Barrie’s Peter Pan, and the title role in the 1929 staging of Claude Anet’s Mademoiselle Bourrat.

Off screen, Josephine Hutchinson is best remembered as the lover of Broadway legend and Best Supporting Actress Oscar nominee Eva Le Gallienne (Resurrection, 1980), who had directed her in The Cherry Orchard, Peter Pan, Mademoiselle Bourrat, and other plays.

[3] Ann Savage would tell Western Clippings’ Michael G. Fitzgerald, “All the girls had their hair fixed this way.”

Klondike Kate is also notable for featuring in a supporting role former Warner Bros. actress Glenda Farrell (Little Caesar, I Am a Fugitive from a Chain Gang, Gold Diggers of 1935), in her heyday a much bigger Hollywood name than either Ann Savage or Tom Neal.

[4] “I wasn’t fired, or dismissed …” and Savage’s salary information via Savage Detours: The Life and Work of Ann Savage.

Groucho Marx: From Hit ‘A Night at the Opera’ to Bomb ‘The...