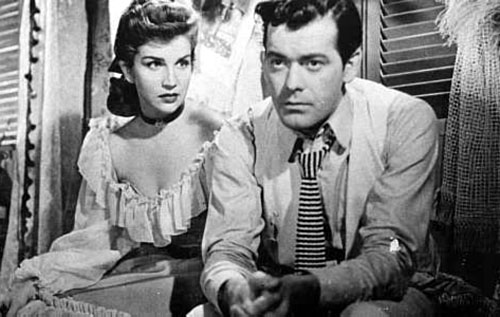 Brazilian actor and filmmaker Anselmo Duarte, whose 1962 anti-religious intolerance drama Keeper of Promises remains the only Brazilian production to have won the Palme d’Or at Cannes, died yesterday, Nov. 7, at a hospital in the city of São Paulo. Duarte, who was 89, had suffered a massive stroke.

The São Paulo State native (born in the town of Salto, on April 21, 1920) began his film career as an actor in the 1940s. Although Orson Welles is supposed to have hired the newcomer to play a bit part as a dancer in his fictionalized “documentary” It’s All True in 1942, Duarte’s first important credits came out later in the decade, e.g., Edmond F. Bernoudy and Paulo Machado’s drama Terra Violenta (1948) and Watson Macedo’s musical comedy Carnaval no Fogo (1949).

Anselmo Duarte’s directorial debut took place in 1957 with the highly successful Absolutamente Certo (Absolutely Right), a comedy starring Duarte himself as a small-town denizen who tries his luck on a TV show after memorizing his town’s telephone directory. Chanchada star Dercy Gonçalves and Odete Lara were his leading ladies.

Five years later, Duarte radically shifted gears with O Pagador de Promessas / Keeper of Promises / The Given Word, in which Leonardo Villar plays Zé do Burro (“Donkey Joe”), a poor man from the Brazilian hinterlands whose most prized possession, his donkey Nicolau, falls ill. Zé do Burro then makes a promise to St. Barbara: If Nicolau recovers, he’ll carry a cross, just like Jesus did, into her church in Salvador, Bahia. Following Zé do Burro’s visit to a candomblé religious ceremony, Nicolau recovers. The relieved Zé do Burro gets his cross ready and travels to Salvador, but the local priest, knowing of the promise keeper’s involvement with the Afro-Brazilian candomblé, will not let him inside the church.

Based on a stage play by Dias Gomes (who bitterly complained about the changes Duarte made to his tale), Keeper of Promises is one of the top five best Brazilian films I’ve seen. Shot in the streets of Salvador, the film has the feel of an Italian neo-realist drama – except that the beautifully naturalistic performances were all delivered by professional players. Besides a superb Leonardo Villar recreating his stage role, Keeper of Promise features excellent work by Brazilian superstars Glória Menezes (right, with Villar) and Norma Bengell.

In addition to its Cannes win (reportedly thanks to François Truffaut’s enthusiastic support), Keeper of Promises remained the only (officially) Brazilian film to receive an Oscar nomination in the best foreign language film category until Fábio Barreto’s O Quatrilho in 1995. (Marcel Camus’ 1958 best foreign language film Oscar winner Black Orpheus is a Franco-Brazilian co-production; it represented France at the Oscars.)

Duarte’s Vereda da Salvação (1964), based on a play by Jorge Andrade, was another drama about religious issues, in this case focusing on a young man (Raul Cortez) who, believing himself to be Jesus incarnate, demands allegiance from his local townsfolk. Though some consider Vereda da Salvação a classic (I’ve never seen it), the film flopped at the time.

According to Debora Couto in Cinema em Cena, Duarte’s film career declined in the mid-1960s at least partly because he became persona non grata among Cinema Novo filmmakers, resentful of Duarte’s success overseas. Compounding matters, Brazil’s right-wing military accused him of being a Communist; Duarte spent time in jail, while Vereda da Salvação was supposedly turned down by Cannes because it was deemed too blatantly left-wing. (The film was, however, screened in Berlin.)

Duarte had better luck with his role as a sadist cop in Luís Sérgio Person’s classic political drama O Caso dos Irmãos Naves (1967), opposite Raul Cortez and Juca de Oliveira as two brothers who become victims of Brazil’s (in)justice system in the 1930s.

His last film as a director was the poorly received Os Trombadinhas, a 1979 Pixote-like melodrama from a story by soccer player Pelé. Duarte’s last appearance in front of the cameras was in Djalma Limongi Batista’s comedy Brasa Adormecida in 1987.

This past June, São Paulo governor José Serra bestowed on Duarte the Order of Ipiranga, the state’s highest civilian honor.

“I was considered a matinee idol,” Duarte is quoted as saying in Cinema em Cena. “That bothered me. It was a put-down. It was my bad luck to be considered a matinee idol. I was shy. I never wanted to become an actor. I wanted to make movies. That’s why I’d call myself, without any arrogance, but with honesty and courage, after 55 years in the film business, a filmmaker. Here and anywhere else in the world. That’s my profession. That’s it.”

I believe it’s available on DVD in Brazil.