Among the most notable efforts are the seven titles listed below – nearly all of them directed by and/or starring non-South Africans, while featuring at least one white actor in a lead role. (Regardless of the box office-friendly presence of American actress Whoopi Goldberg, Sarafina! is the one exception in both instances.)

There have been three official film adaptations of Alan Paton’s classic 1948 apartheid novel Cry, the Beloved Country, the story of a Zulu church minister looking for his missing son in Johannesburg – only to find him on trial for the murder of the son of a white, wealthy, and bigoted landowner.

Directed by Hungarian-born, U.S.-based Zoltan Korda (Sahara, The Macomber Affair), the British-made 1951 version of the story – shot in South Africa and the first (relatively speaking) major production to deal with the issue – is supposed to have toned down the more militant elements found in Paton’s novel.

Toplining American actor Canada Lee (Lifeboat, Body and Soul) as the pastor and British actor Charles Carson (Secret Agent, Victoria the Great) as the landowner, the 1951 Cry, the Beloved Country is also notable for featuring future Best Actor Oscar winner Sidney Poitier (Lilies of the Field, 1963) in a strong supporting role as a Johannesburg-based activist priest.

Released in the U.K. in April 1952 – an all-white South African premiere had been held the previous November – the apartheid drama was nominated for two British Academy Awards (BAFTAs): Best British Film and Best Film from Any Source. (The winner in both categories was David Lean’s The Sound Barrier / Breaking the Sound Barrier.)

Despite some enthusiastic critical praise (“a movie of enormous human stature and dramatic fervor,” cheered the left-wing/progressive Daily Compass), Cry, the Beloved Country – “watered down” and unfathomably renamed African Fury – failed to lure audiences in the United States following its release in early 1952.

Cry, the Beloved Country turned out to be the last movie featuring Canada Lee, who had been blacklisted by the House Un-American Activities Committee, eventually dying at age 45 in 1952.

Another blacklisted American talent working on the family/sociopolitical drama was John Howard Lawson (Bachelor Apartment, Blockade), one of the Hollywood Ten and the writer of the Cry, the Beloved Country screenplay, initially credited to Alan Paton.[1] 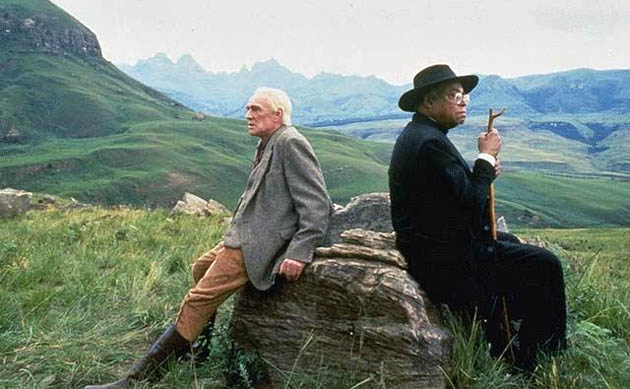 Cry the Beloved Country with James Earl Jones and Richard Harris. Directed – for a change – by a South African filmmaker, Darrell Roodt, the 1995 movie version of Alan Paton’s 1948 apartheid era novel Cry, the Beloved Country was made with an eye on the U.S. market, with the starring roles going to two Oscar-nominated veteran actors, American James Earl Jones and Irishman Richard Harris. Unfortunately for U.S. distributor Miramax, that wasn’t enough to pique the interest of American moviegoers; Cry, the Beloved Country turned out to be a box office bomb in that country.

Directed by a South African, Darrell Roodt, from a screenplay by another South African, (British-based) Oscar winner Ronald Harwood (The Pianist, 2002), the 1995 version of Cry, the Beloved Country was proclaimed the first major production to come out of South Africa. (The film was actually a co-production with U.S.-based companies; it reportedly cost “under” $7 million.)

At the world premiere held at New York City’s Ziegfeld Theater, attendee Nelson Mandela – at whose trial for treason Alan Paton had pleaded for mercy – remarked that Cry, the Beloved Country “will evoke, for my generation, bittersweet memories of our youth.”

Despite the “name” casting, Mandela’s bittersweet memories, and some good reviews, Roodt’s version was a major box office bomb in the U.S., taking in a paltry $671,000.

Adding insult to injury, in spite of its timely apartheid theme – Mandela had been elected South Africa’s first black president in 1994 – Cry, the Beloved Country failed to receive a single Oscar nomination.

Lost in the Stars: Apartheid musical about ‘noble black folks’

Directed by Hollywood veteran Daniel Mann (Come Back Little Sheba, The Rose Tattoo) from a screenplay by another veteran, British-born/U.S.-based Alfred Hayes (Clash by Night, A Hatful of Rain), the 1974 musical Lost in the Stars is the film version of Kurt Weill and Maxwell Anderson’s 1949 Broadway musical adaptation of Cry, the Beloved Country, which starred Leslie Banks and Todd Duncan.

A poorly received flop at the time it came out – two years after the musical had a brief Broadway revival – the film version of Lost in the Stars has failed to attain camp cult classic status à la another poorly received flop musical of the mid-1970s, Charles Jarrott’s 1973 Lost Horizon remake. Instead, notwithstanding a DVD release in the early 21st century, Daniel Mann’s effort has all but fallen into oblivion.

In the anti-apartheid film, U.S. actor Brock Peters (To Kill a Mockingbird) reprises his 1972 stage role as the church minister while British actor Paul Rogers was cast as the landowner. Additionally, U.S. actress Melba Moore has a significant part as the pregnant girlfriend of the minister’s son (Clifton James).

“Lost in the Stars is a very bad movie but it does contain the Weill score. The music almost compensates for the foolishness of the images, the lyrics, the drama and the point-of-view, which, in spite of the ending, recalls the ‘ain’t-black-folks-noble?’ philosophy evident in so much well-meaning theater of 40 to 50 years ago. Tote dat barge. Lift dat bale. A card at the beginning of the movie identifies the time of the story as ‘The Recent Past.’ That isn’t enough to get the movie off the hook.”

Set at the time of the Soweto Riots of the mid-1970s, when thousands of students rebelled against the implementation of Afrikaans – a variation of Dutch – as the language of education, Sarafina! stars an actual South African as the lead: Ngema’s wife Leleti Khumalo, reprising her Tony-nominated role. (Twelve years later, Khumalo would star in Roodt’s Oscar-nominated AIDS-themed drama Yesterday.)

Also in the Sarafina! cast: South Africans Miriam Makeba and John Kani, and U.S. actress Whoopi Goldberg as an inspirational teacher who ends up behind bars. 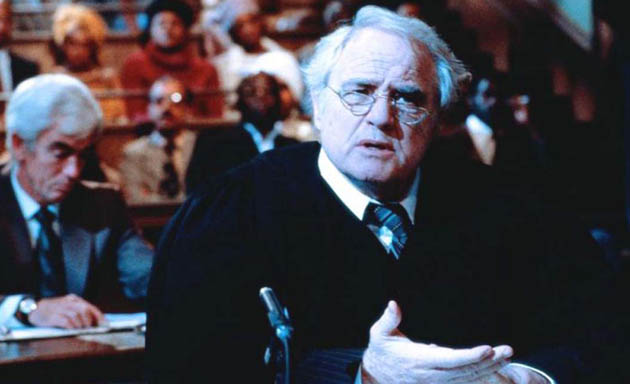 Marlon Brando in A Dry White Season. Notable as the first “Hollywood movie” directed by a black woman, Euzhan Palcy’s independently made 1989 apartheid drama A Dry White Season was criticized by some for being one more English-language film – along with the South Africa-set Cry Freedom and A World Apart, and the U.S.-set Mississippi Burning and Glory – about anti-black racism that focused on the travails of its white characters. Two-time Oscar winner Marlon Brando (On the Waterfront, 1954; The Godfather, 1972) received his ninth and final – and first in the Best Supporting Actor category – Oscar nod for playing hero Donald Sutherland’s attorney.

Set in mid-1970s Johannesburg, Martinique-born Euzhan Palcy’s A Dry White Season (1989) stars Canadian actor Donald Sutherland as a white history teacher who, around the time of the Soweto riots, becomes an anti-apartheid crusader following the disappearance of his black gardener (played by South African playwright/actor Winston Ntshona), later found to have been tortured and killed by the local police.

Notable as the first “Hollywood production” to be directed by a black woman – Metro-Goldwyn-Mayer distributed the independently made political drama in the U.S. – A Dry White Season was, more than a tad ironically, criticized in some quarters for being a Eurocentric apartheid movie. (Washington Post reviewer Jeanne Cooper wasn’t as censorious, commenting that Palcy’s “authentically portrayed black characters are much more than victims, if still not the sole protagonists in their story.”)

The screenplay was written by Palcy and Colin Welland, from a novel by Afrikaner author André P. Brink.

Left behind, mother (American actress Barbara Hershey) and daughter (British actress Jodhi May) must come to terms with their disintegrating family while attempting to fend off hostile political forces.

Shawn Slovo, daughter of South African Communist Party leaders Joe Slovo and Ruth First (and a former personal assistant to Robert De Niro), wrote the semi-autobiographical A World Apart screenplay, which was criticized by some because the apartheid-themed story, notwithstanding its real-life basis, revolves around white people and their problems. 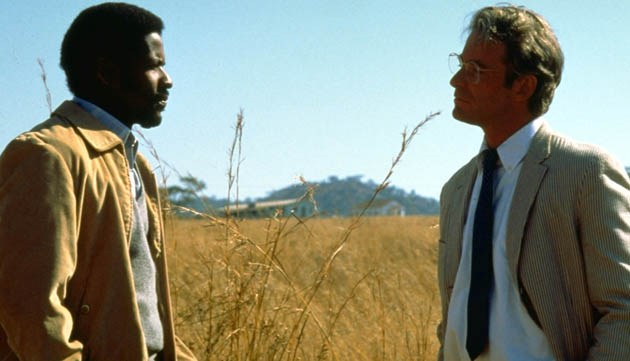 Cry Freedom with Kevin Kline and Denzel Washington. Initially heralded as one of the “prestige productions” of 1987 – one directed by the Academy Award-winning Gandhi filmmaker, no less – Richard Attenborough’s apartheid drama Cry Freedom received some criticism for its focus on the plight of white South Africans, namely journalist Donald Woods (Kevin Kline) and his family. The film ended up receiving only three Oscar nominations: two in the Music categories (for composers/songwriters George Fenton and Jonas Gwangwa) and a Best Supporting Actor nod for an embarrassingly miscast Denzel Washington for his portrayal of political activist Steven Biko.

Like A Dry White Season and A World Apart – and alongside a couple of other race-conscious English-language films of the late 1980s, the U.S.-set Mississippi Burning (1988) and Glory (1989) – Cry Freedom was excoriated by some for having a white character at its center.

If that weren’t all, the New York Times’ Janet Maslin also complained about the director’s ham-handed approach:

“The mantle of greatness does not fall lightly onto the heroes of Sir Richard Attenborough’s epic film biographies. It is placed there by a heavy hand. A great statesman … is apt to be bathed in beatific light as he delivers important speeches, and to be making speeches even when he talks with intimate friends. He will be surrounded by acolytes, who often nod their approval as one. When he moves the masses, thousands of people will appear on screen. And he will speak to them in clear, helpful, eminently instructive tones. Everyone else in the film will speak that way, too.”

Cry Freedom might also have been criticized for having two American actors as the South African leads, particularly for the absurd miscasting of – eventual Best Supporting Actor Oscar nominee – Denzel Washington as Biko.

The screenplay was written by another American, John Briley (Oscar winner for Gandhi), who adapted Donald Woods’ books Biko and Asking for Trouble: The Autobiography of a Banned Journalist.

[1] “I wrote the [Cry, the Beloved Country] screenplay anonymously for my old friend, Zoltan Korda,” Lawson is quoted as saying in Gerald Horne’s The Final Victim of the Blacklist: John Howard Lawson, Dean of the Hollywood Ten. “Paton came to Hollywood and we discussed it in great detail.”

[2] A South African playwright/actor, John Kani was also seen in a couple of other apartheid-themed South African productions mostly made by/featuring local talent: Ross Devenish’s 1980 filmization of playwright Athol Fugard’s Marigolds in August and U.S. writer/director Cristobal Krusen’s 2001 drama Final Solution, based on the life of Gerrit Wolfaardt (played by Jan Ellis), an Afrikaner who became an Adolf Hitler disciple before being brought back to sanity by his wife and Alan Paton’s Cry, the Beloved Country.

Image of Marlon Brando as a lawyer fighting apartheid in A Dry White Season: Metro-Goldwyn-Mayer.

Jurassic World: The Game Is On vs. The Avengers

“…an absurdly miscast — and Best Supporting Actor Oscar nominee — Denzel Washington”. What?!? Denzel was absurdly miscast? Not only did he, as mentioned, get an oscar nomination for that role, but having seen all of his films, in my opinion this was one of his finest ever performances. He played the role with dignity, wisdom, complexity, inspiration, drama, made exemplary speeches, was true to the historical accuracies of the story, learned the local accent… how was he miscast? Furthermore, he had an amazing chemistry with the lead actor, the brilliant Kevin Kline, and the two carried the movie together in what was an unforgettable film. In fact, everybody should see it.

You didn’t mention “Catch a Fire”

Thanks for the reminder.

What about The Wilby Conspiracy (1975) -a racking good chase thriller with Michael Caine and Sidney Poitier — that ends with the radicalized white protagonist doing the black protagonist a favor by blowing away a racist oppressor (Nicol Williamson)?