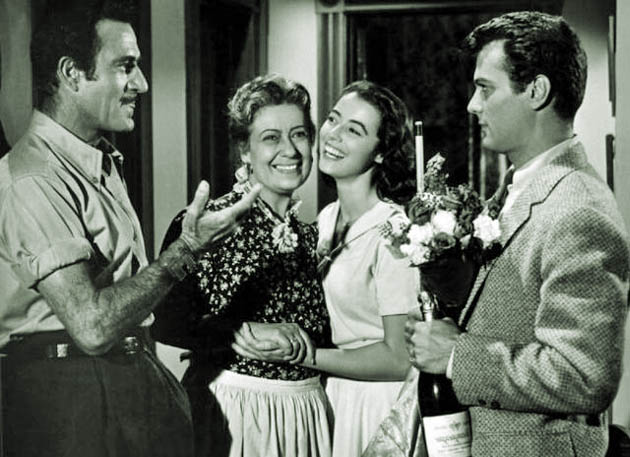 Actress Argentina Brunetti, a founding member of the Hollywood Foreign Press Association – which hands out Golden Globes on a yearly basis – and a supporting player in Frank Capra’s It’s a Wonderful Life, died at age 98 in Rome on Dec. 20.

Born Argentina Ferrau on Aug. 31, 1907, in Buenos Aires, Brunetti came to Hollywood in 1937 to dub into Italian the voices of Metro-Goldwyn-Mayer stars Norma Shearer and Jeanette MacDonald. She began acting in films about a decade later.

Her husband, Miro Brunetti, was a Hollywood-based foreign correspondent. Hence her connection with the founding of the HFPA.

In the 1946 Best Picture nominee and (in the U.S.) Christmas favorite It’s a Wonderful Life, Brunetti played an Italian immigrant, Mrs. Maria Martini, whose family, with the assistance of the small-town financial institution co-owned by George Bailey (James Stewart) buys a home of their own – thus finally getting the chance to move out of the slum dwelling belonging to the avaricious banker/slumlord Mr. Potter (Lionel Barrymore).

In addition to Frank Capra’s sentimental fairy tale, Argentina Brunetti was seen in dozens of Hollywood releases, usually as uncredited, Italian- or Spanish-named mothers and grandmothers, with the occasional Native American thrown in.

Brunetti also appeared in numerous television shows, including The Untouchables, Kojak, and Everybody Loves Raymond.

Argentina Brunetti was one of the last surviving adult cast members of It’s a Wonderful Life, which, as per the IMDb, had its initial release on Dec. 21, 1946 – almost exactly 59 years before Brunetti’s passing.

The only surviving adult It’s a Wonderful Life performer is Virginia Patton (born on June 25, 1925), who plays Ruth Bailey in the film.

Charlotte Rampling in Twice Upon a Time: Veteran international cinema actress to head Berlin Film Festival Golden Bear jury. In movies beginning in the mid-1960s (The Knack… and How to Get It, Georgy Girl), Charlotte Rampling has been a steady toiler since then, being featured in leads and top supporting roles in more than 50 big-screen releases on both sides of the North Atlantic. These range from Luchino Visconti’s rococo The Damned and Liliana Cavani’s gloomy The Night Porter to Woody Allen’s 8½-esque Stardust Memories and Sidney Lumet’s box office hit The Verdict, and on to François Ozon’s Under the Sand and Swimming Pool.

British actress Charlotte Rampling will preside over the International Competition Jury of the 2006 Berlin Film Festival. Referring to Rampling as a “fascinating woman and brilliant artist,” Berlinale director Dieter Kosslick expressed his pleasure in having on board an actress who “has come to stand for unconventional and memorable cinema.”

During her 40+-year career, Rampling – who has lived in France most of her life – has appeared in almost 70 films, most notably:

Here are a few more Charlotte Rampling movies of the last two decades:

The French-based Rampling has never been nominated for an Academy Award or a BAFTA, but she has been shortlisted for three Best Actress Prix César: He Died with His Eyes Open (1986), Under the Sand (2001), and Swimming Pool (2003). Additionally, in 2001 she was handed an Honorary César for the bulk of her film career.

This year, Charlotte Rampling has been nominated for the Jameson People’s Choice Best European Actress Award for her work in Dominik Moll’s Lemming. The winner will be announced at the Dec. 3 European Film Awards ceremony in Berlin.