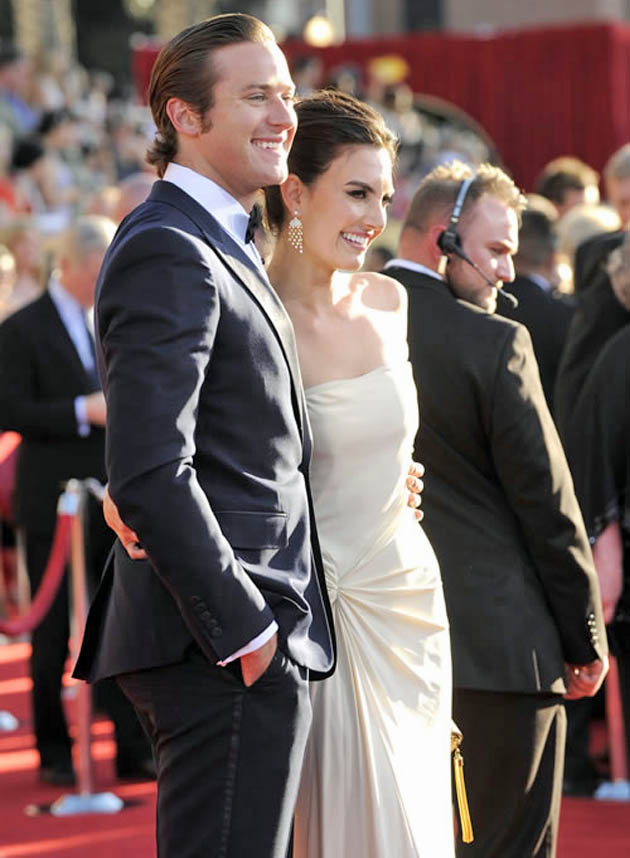 A few days after having been arrested for marijuana possession in Texas – where police apparently have too much free time in their hands – Armie Hammer was also a SAG Awards ceremony presenter. Hammer got down to business without any cracks about the arrest.

Anyhow, the 25-year-old actor shouldn’t worry too much. Back in the 1940s, Robert Mitchum spent time in jail for marijuana possession. Even in those days, that had absolutely no damaging effect on Mitchum’s career; his credits range from film noir classics such as Jacques Tourneur’s Out of the Past (1947) and Edward Dmytryk’s Crossfire (1947) to the David Lean would-be epic Ryan’s Daughter (1970).

Moreover, Mitchum’s arrest did nothing to prevent either an increase in marijuana consumption or more pointless marijuana-related arrests.

This year’s other nominees were:

Last year, Hammer was one of the performers shortlisted for the Best Cast SAG Award for David Fincher’s The Social Network. The other nominees were:

Prior to J. Edgar and The Social Network, Armie Hammer had been featured in about only half a dozen films, mostly in minor roles/bit parts and/or in little-seen fare. Titles include:

Among the series’ directors are Ryan Murphy and Brad Falchuk.

Jessica Lange (born on April 20, 1949, in Cloquet, Minnesota) had previously been nominated for two SAG Awards:

Additionally, Lange has six Academy Award nominations to her credit. She won twice:

Her other Oscar nominations, all of them in the Best Actress category, were for: 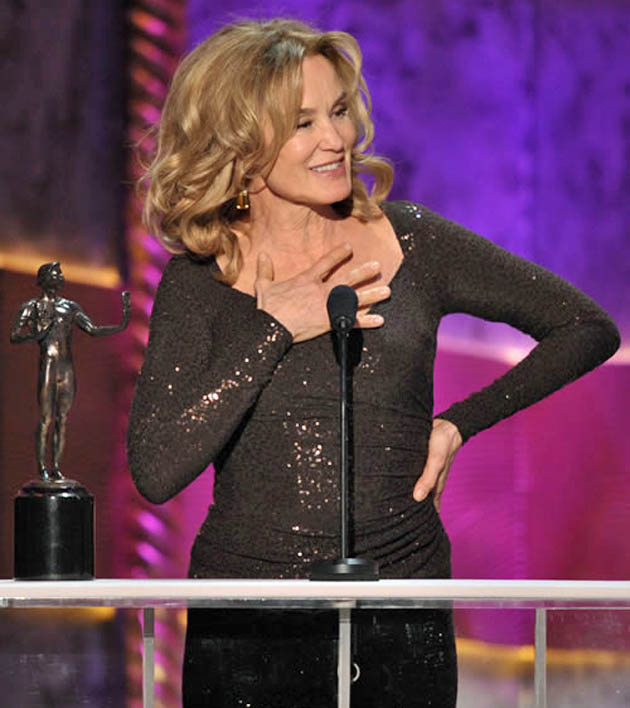 ‘To be an actor means everything’

Pictured above is American Horror Story Best Actress winner Jessica Lange while accepting her 2012 SAG Award. “To be an actor means everything to me,” Lange told the crowd at the Shrine Auditorium.

Luckily for her, in the last (almost) four decades she has found lots of opportunities to enjoy meaningful experiences.

In addition to the titles listed further up, among Jessica Lange’s more than 30 movie credits are the following:

Besides American Horror Story, Jessica Lange has been featured in about 10 television productions, most notably as Maggie the Cat in Jack Hofsiss’ Cat on a Hot Tin Roof (1984), opposite Tommy Lee Jones, and as Blanche DuBois in Glenn Jordan’s A Streetcar Named Desire (1995), opposite Alec Baldwin.

She has been nominated for seven Emmy Awards, winning three times:

On stage, she brought Blanche back to life in a 1992 revival of Tennessee Williams’ A Streetcar Named Desire on Broadway (reprising the role in London’s West End in 1996). At the West End in 2000, she was Mary Tyrone in a production of Eugene O’Neill’s Long Day’s Journey Into Night – a role previously tackled by the likes of Constance Cummings in the West End and Katharine Hepburn on film.

‘The Big Valley’ that never was

Back in 2012, Jessica Lange was supposed to have been featured in Daniel Adams’ big-screen version of the classic TV Western series The Big Valley. In the old Barbara Stanwyck role, Lange was to have taken over from the previously announced Susan Sarandon.

The project was derailed after director Daniel Adams was indicted for fraud in connection with his films The Golden Boys and The Lightkeeper. 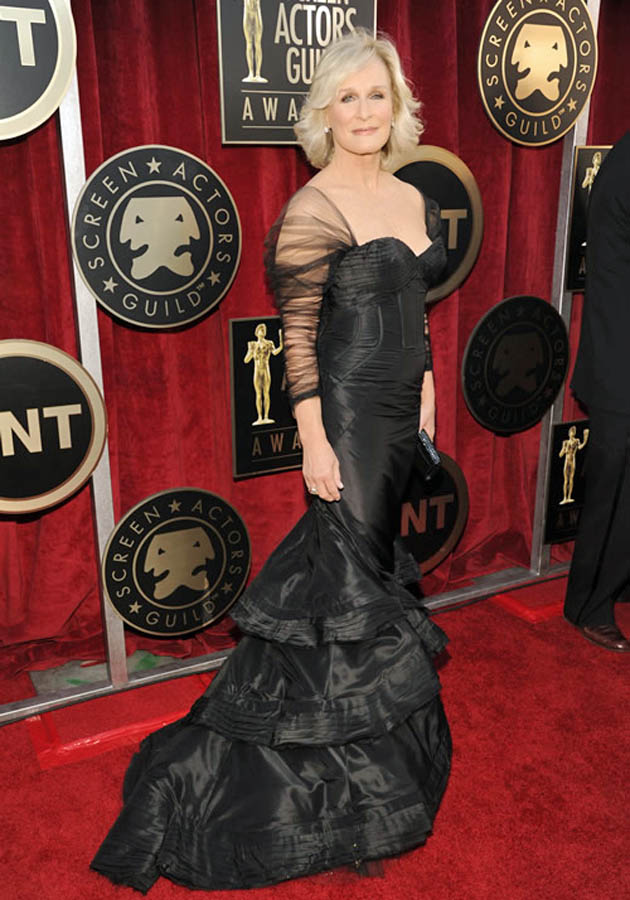 Close’s competition for the Best Actress SAG Award consisted of:

Glenn Close has been nominated for a total of eight SAG Awards. She won for the television movie The Lion in Winter (2003), in which she plays Eleanor of Aquitaine – the role that earned Katharine Hepburn her third Best Actress Oscar back in early 1969. (Hepburn tied with Barbra Streisand for her performance as Fanny Brice in William Wyler’s Funny Girl.)

In the television categories, Close has a total of four nominations for Damages, in addition to nods for her lesbian military officer in Serving in Silence: The Margarethe Cammermeyer Story (1995) and for Christopher Reeve’s In the Gloaming (1997), as the mother of a young man (Robert Sean Leonard) dying of AIDS.

Albert Nobbs, in which Close plays a woman passing for a man in 19th-century Ireland, is Close’s sole SAG Award nomination in the motion picture categories. 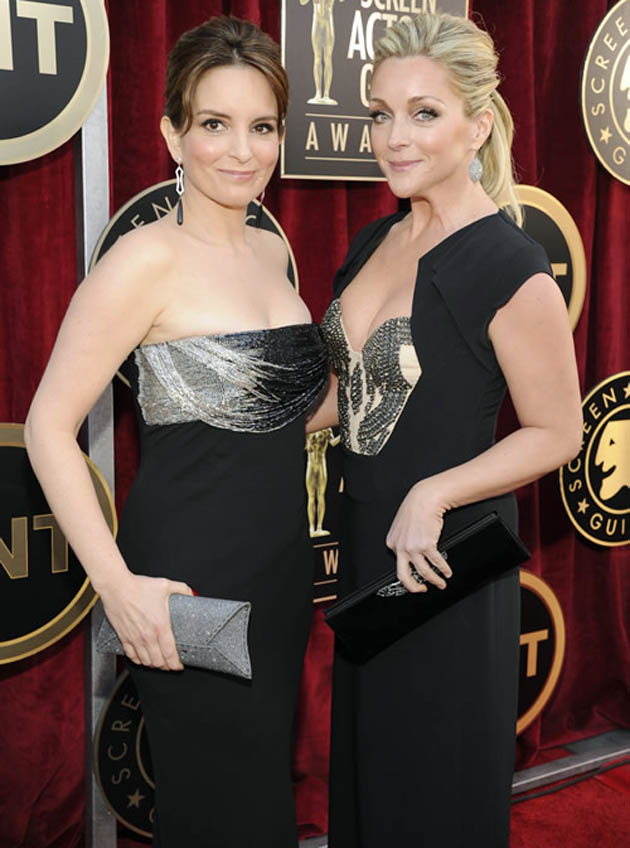 Tina Fey and Jane Krakowski are seen above as they arrive at the 18th Annual Screen Actors Guild Awards. Fey was a double nominee: Best Actress in a Comedy Series for 30 Rock, which was also up for Best Cast. Krakowski was another 30 Rock Best Cast nominee.

Additionally, Tina Fey was a presenter at the SAG Awards ceremony.

Although mostly a television performer (Another World, Ally McBeal), Jane Krakowski has been featured in about 15 motion pictures since her debut as Cousin Vicki in the Chevy Chase lowbrow comedy National Lampoon’s Vacation (1983). Titles include the following:

Besides Armie Hammer and Tina Fey, other presenters at the 2012 SAG Awards included the following: 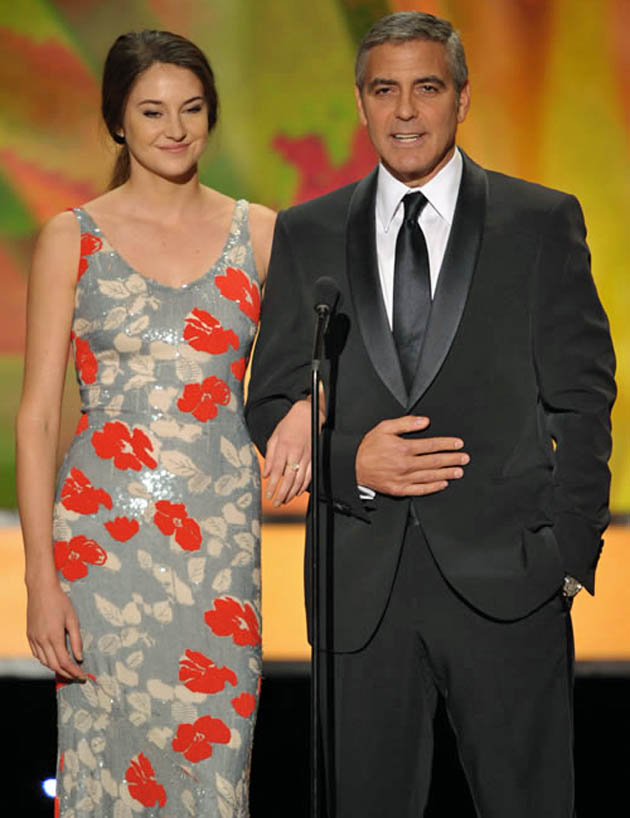 The nominated The Descendants cast consisted of:

Additionally, Clooney was a Best Actor nominee. As it happened, he lost to French actor Jean Dujardin for his performance as a Douglas Fairbanks-ish Hollywood silent film star in Michel Hazanavicius’ The Artist.

The other Best Cast contenders were: 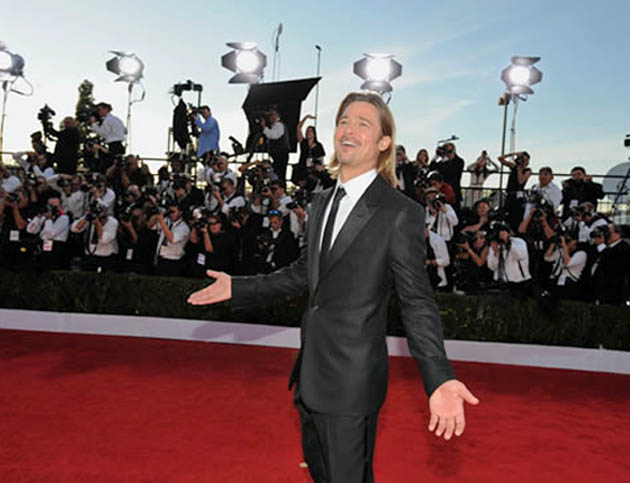 Brad Pitt, perhaps recognizing some old buddy among the group of photographers outside the Shrine Auditorium, is pictured above while arriving at the 18th Screen Actors Guild Awards.

Pitt was in the running in the Best Actor in a Motion Picture category for his performance in Bennett Miller’s baseball drama Moneyball, also featuring Jonah Hill and Robin Wright.

Accompanying Brad Pitt at the SAG Awards 2012 ceremony was Angelina Jolie, who wasn’t in the running for anything. Yet Jolie did get a Golden Globe nomination (in the Best Foreign Language Film category) for her directorial debut, In the Land of Blood and Honey, set during the Bosnian War. Jolie’s film also won the Producers Guild of America’s Stanley Kramer Award.