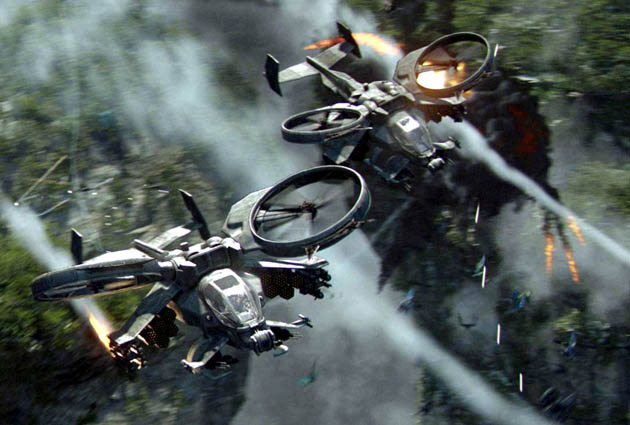 Avatar war: Titanic or Cleopatra? Not taking inflation into account, James Cameron’s futuristic 3D action fantasy is the most expensive 20th Century Fox production ever. Once inflation is factored in, Joseph L. Mankiewicz’s CGI-less Cleopatra remains not only Fox’s costliest production but also the second most expensive movie ever made, trailing only – by a few million dollars – Pirates of the Caribbean: At World’s End. It remains to be seen whether Avatar will turn out to be like its tragic but profitable predecessor, the Cameron-directed Fox co-production Titanic, or like Cleopatra, which left the studio on the verge of bankruptcy.
Contents hide
1. ‘Avatar’ premieres: Elliptically positive reviews
1.1. More ‘Avatar’ reviews
1.2. ‘Avatar’ budget
1.3. Most expensive Fox movie ever?
1.4. How big a blockbuster does ‘Avatar’ need to be?
1.5. ‘Avatar’ cast
1.6. Henry Selick mini-retrospective in Hollywood
1.7. Los Angeles Film Critics co-winner ‘The Beaches of Agnès’ returns to L.A.

James Cameron’s Avatar, the event movie of the season, had its world premiere in London on Dec. 10.

Since critics and audience members alike were initially forbidden from commenting on 20th Century Fox’s costly sci-fi extravaganza, The Guardian‘s Mark Brown had to come up with an elliptical commentary.

In a piece titled “Avatar: hit or miss? We can’t really tell you,” Brown writes:

“By saying Avatar was really much, much better than expected, that it looked amazing and that the story was gripping – if cheesy in many places – the Guardian is in technical breach of the [later rescinded] agreement. It is not a breach, however, to report that other journalists leaving the screening were also positive: the terrible film that some had been anticipating had not materialised. It was good.”

Brown adds that cynics may, however, “sneer at the plot,” which requires “a certain amount of suspension of disbelief.”

U.S. Republicans, for their part, may writhe in agony in their seats when they hear a “deranged general” reminiscent of former Commander in Chief George W. Bush, saying, “Our survival relies on pre-emptive action. We will fight terror, with terror.”

Following Brown’s article – and surely aware that the buzz would be mostly positive – Fox said To Hell with It, and allowed other reviewers to chip in.
Here are three more Avatar commentaries:

“Avatar is an overwhelming, immersive spectacle,” writes Wendy Ide in The Times of London. “The state-of-the-art 3D technology draws us in, but it is the vivid weirdness of Cameron’s luridly imagined tropical otherworld that keeps us fascinated.”

“A dozen years [after Titanic], James Cameron has proven his point: He is king of the world,” gushes Kirk Honeycutt in The Hollywood Reporter. “… He brings science-fiction movies into the 21st century with the jaw-dropping wonder that is Avatar.”

“The story of Avatar was okay – but probably the weakest part of the whole production,” says Empire. “If you step back and look at the basic premise of the movie, it was all pretty simple. The corporate bullies, with the help of the army, step in to take something valuable and they don’t care who they are inconveniencing by doing it. We’ve seen this a million times before on film and probably more times in real life.”

Next, Avatar will kick off the Dubai International Film Festival on Dec. 15. Three days later, it’ll open in the U.S. Around that date, it’ll also be released in dozens of other countries.

Depending on who you listen to, Avatar may have cost more than the Gross National Product of Austria, Argentina, and Algeria put together.

According to 20th Century Fox, which at first had kept mum on actual figures, the Avatar budget reached $237 million – the highest ever for the studio (not taking inflation into account) – in addition to $150 million in marketing costs.

Just bear in mind that you shouldn’t believe everything you hear (or read).

Cleopatra with Elizabeth Taylor. Directed by Joseph L. Mankiewicz (replacing Rouben Mamoulian), the 1963 Cleopatra became both a major blockbuster and a Best Picture Academy Award nominee – one that nearly bankrupted 20th Century Fox. How come? It’s simple: Cleopatra became – and was to remain for nearly five decades – the costliest movie ever made. Elizabeth Taylor, the first performer to officially earn $1 million for a single movie, starred as the Egyptian queen, along with Richard Burton (replacing Stephen Boyd) as Mark Anthony and eventual Best Actor nominee Rex Harrison (replacing Peter Finch) as Julius Caesar.

Most expensive Fox movie ever?

Whether or not the official $237 million + $150 million figure is accurate is, at this stage, anyone’s guess.

As for Avatar being the costliest 20th Century Fox production ever, that’s hardly an accurate statement once inflation is taken into account.

Joseph L. Mankiewicz’s Cleopatra had a reported $44 million budget; that means the superspectacle starring Elizabeth Taylor, Richard Burton, and Rex Harrison would have cost – as per the U.S. Department of Labor’s inflation figures – approximately $310 million in 2009.

So, Avatar isn’t exactly a bargain when compared to these two titles, but if these figures are on target, the Pandora-set tale featuring long-legged Na’vi natives and a plethora of 3D visual effects was quite a bit less monumentally expensive than its two megabudget Fox predecessors.

How big a blockbuster does ‘Avatar’ need to be?

Both officially and in inflation-adjusted figures the most expensive movie ever made is Disney’s 2006 Gore Verbinski-Johnny Depp collaboration Pirates of the Caribbean: At World’s End, which cost a reported $300 million, or about $325 million in 2009 dollars.

Pirates of the Caribbean: At World’s End ultimately grossed approx. $963 million at the global box office (i.e., not including ancillary revenues). It’s unclear whether that was enough to offset production and marketing + distribution costs.

With more than $1.8 billion in worldwide receipts, Titanic eventually recovered its cost and earned distributors/co-financiers Paramount and 20th Century Fox sizable profits, but the making of Cleopatra – even though the film would eventually become a major hit – left Fox on the verge of collapse.

As per the old box office rule of thumb, Hollywood studios keep about 50–55 percent of a film’s domestic gross and 40 percent of its international gross.* If so, Avatar – in case its budget and distribution-related costs have been accurately reported – would have to score at least $800 million worldwide.

Century City, a.k.a. the old Fox backlot, is a result of the Cleopatra debacle. Will Los Angeles’ Westside get another new neighborhood if Avatar fails?

* Percentages from China, now a top source of international revenues, are – at least officially – much lower. It’s unclear how that has changed the international equation.

Three-time Oscar nominee Sigourney Weaver (as Best Actress for Aliens, 1986, and Gorillas in the Mist, 1988; as Best Supporting Actress for Working Girl, 1988). 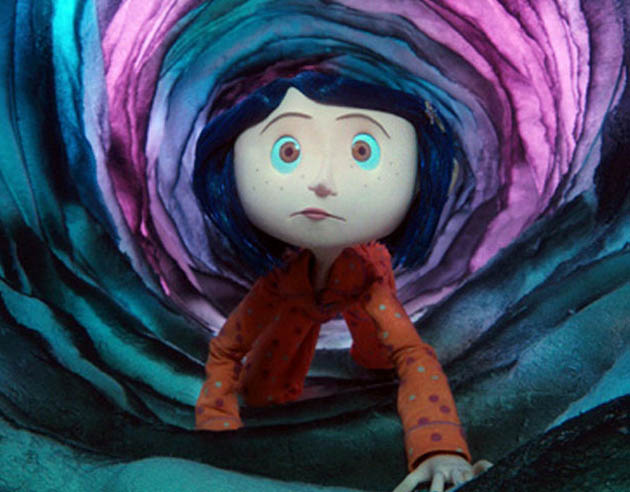 Coraline: Animator Henry Selick’s dark fantasy is one of the three movies in a mini Selick retrospective to be presented by the American Film Institute at the ArcLight Hollywood. The other two are James and the Giant Peach and The Nightmare Before Christmas. In the voice cast of these three Henry Selick efforts: Dakota Fanning, Jennifer Saunders, Joanna Lumley, Chris Sarandon, Catherine O’Hara, Susan Sarandon, Richard Dreyfuss, and Dawn French.

James and the Giant Peach, Coraline, and The Nightmare Before Christmas will be screened at a Henry Selick mini-retrospective to be presented by the American Film Institute at the ArcLight Hollywood on Dec. 10, beginning at 5:00 p.m.

Coraline is one of 20 animated features vying for a 2010 Oscar nomination. Additionally, Selick’s 3D fantasy received 10 Annie Award nominations from the International Animated Film Society – more than any other film this year. (Pete Docter’s blockbuster Up came in second, with nine nods.)

A Q&A with Henry Selick will follow the 7 p.m. screening of Coraline.

Schedule and film info below from the AFI website:

DIR Henry Selick. SCR Karey Kirkpatrick, Jonathan Roberts, Steve Bloom (based on the book by Roald Dahl). CAST Susan Sarandon, Paul Terry, Richard Dreyfuss, Jane Leeves, Joanna Lumley, Miriam Margolyes, Pete Postlethwaite, David Thewlis, Simon Callow. MUSIC Randy Newman.
When James, an orphan, is sent to live with his wicked Aunts Spiker and Sponge, he can only dream about going to New York City – a place, his father once told him, where dreams come true – until a magical bag from a mysterious man takes him on an incredible adventure in a giant peach.

DIR/SCR Henry Selick (based on the book by Neil Gaiman). CAST Dakota Fanning, Teri Hatcher, Jennifer Saunders, Dawn French, Keith David, John Hodgman, Robert Bailey Jr., Ian McShane.
Coraline, the first stop-motion animated feature to be conceived and photographed in stereoscopic 3-D, focuses on Coraline Jones, a girl of 11 who is feisty and adventurous beyond her years. She uncovers a secret door and discovers an alternate version of her life – one that is similar, but much better. When her fantastical visit turns dangerous, Coraline must muster all of her resourcefulness and bravery to get back home – and save her family.

DIR Henry Selick. SCR Caroline Thompson (based on a story and characters by Tim Burton). CAST Chris Sarandon, Danny Elfman, Catherine O’Hara, William Hickey, Glenn Shadix, Paul Reubens, Ken Page, Ed Ivory, Susan McBride.
Jack Skellington has grown bored with his job as “The Pumpkin King,” and so, despite having just presided over a very successful Halloween, he is beginning to find life in Halloweenland unfulfilling. Serendipitously, Jack stumbles upon Christmastown, a place abundant with cheer and good will and he promptly decides to make the Yuletide his own, embarking on a merry mission that puts Santa in jeopardy and creates a nightmare everywhere.

Cinema Guild will bring Agnès Varda’s The Beaches of Agnès / Les plages d’Agnès back to Los Angeles on Saturday, Dec. 26, and Sunday, Dec. 27, at 11 a.m. at the Laemmle Sunset 5 in West Hollywood and Playhouse 7 in Pasadena.

The Los Angeles Film Critics Association’s Best Documentary of 2009 – in a tie with Louie Psihoyos’ The Cove – The Beaches of Agnès has also been included on the shortlist for Academy Award consideration in the 2010 Best Documentary Feature category.

Additionally, The Beaches of Agnès has been nominated for a European Film Award.

well… read carefully before commenting..
the author compares it with GROSS NATIONAL PRODUCT( GNP ) AND NOT GROSS DOMESTIC PRODUCT(GDP).. lol… srsly… google before u counter any statement

According to World Bank figures, the GDP of Argentina, Algeria, and Austria put together is $1.146 trillion. No, AVATAR didn’t cost that much.

I was fully aware the comparison was way WAY far-fetched. And that was the whole point: AVATAR cost figures have been much, much exaggerated and, as I wrote in the post, “you shouldn’t believe everything you hear.” (Or read.)

I do know the difference between billions and millions. I have neither, but would be happier with the former. (Though I’d settle for the latter as well.)

The writer of the article needs to keep a sense of proportion when saying “Avatar may have cost more than the Gross National Product of Austria, Argentina, and Algeria put together”. Obviously confusing millions and billions, even if the goal is too emphasize the excessive cost of the film this is a bit far fetched.

You wrote “Avatar may have cost more than the Gross National Product of Austria, Argentina, and Algeria put together. (Fox, which at first had kept mum on actual figures, now says that Avatar cost $237 million to make and $150 million to promote.)”…

You made a mistake…. THe GDP of such countries is in billion not million……