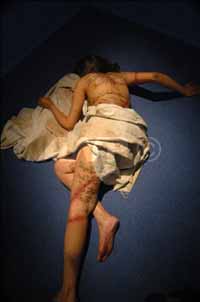 According to numerous reports, Ayaan Hirsi Ali, a Somali refugee who has become a Dutch Member of Parliament for the conservative Liberal Party*, has announced plans to produce a film about gays and Islam. According to Hirsi Ali, she and director Theo van Gogh co-wrote the screenplay of the upcoming film, to be called Submission Part II, in the summer of 2004. On November 2 of that year, van Gogh was brutally murdered by a Muslim fanatic who had been outraged by the television broadcasting of Submission Part I, a 12-minute short about the mistreatment of women under Islam, which van Gogh had directed from Hirsi Ali’s screenplay. (The short also outraged both moderate and female Muslims, who found it a sensationalistic and gratuitous attack on Islam and Muslims in general.)

(Ironically, van Gogh’s last feature film, 06/05, is a fictional account of the murder of the demagogue – and openly gay – Dutch politician Pim Fortuyn. Fortuyn, who singled out Islam – as opposed to, say, Christianity – as being anti-gay, was murdered by an animal rights activist on May 6, 2002, several days before the Dutch national elections which promised to give him a large chunk of the vote. Among Fortuyn’s political deeds was a call to repeal the first article of the Dutch constitution which forbids discrimination; he also referred to Islam as a “backward culture” and wanted to end Muslim immigration to The Netherlands.)

Hirsi Ali, a self-described “lapsed Muslim,” also received death threats at the time the first Submission was aired, and remained in hiding for several months. In order to protect the upcoming film’s actors and crew from potential attacks by other Muslim radicals, Submission Part II will have an anonymous cast and carry no credits.

A BBC article on Submission Part II states that “mainstream Islamic thought treats Islam and homosexuality as incompatible, and hostility to homosexuals is widespread in many parts of the Muslim world.” Unfortunately – though not unexpectedly – the article implies by omission that anti-gay bigotry is somehow a “Muslim attitude,” when in reality it is pervasive in societies (from China to the United States) where conformity to traditional religious and/or sociopolitical patriarchal values are the rule.

One horrific anti-gay act of violence that comes to mind is that of a thirty-nine-year-old gay man whose throat was cut, his body bludgeoned with an ax handle, and then thrown on top of a pile of tires and set on fire. Later on, one of the two convicted murderers explained that he had been forgiven by God and would thus go to heaven, but his victim, Billy Jack Gaither, would burn in hell for all eternity because of his sexual orientation. Gaither’s murder, I should add, took place in Alabama. Although the murder wasn’t per se religiously motivated, it was undoubtedly the result of a deranged mind formed within a traditionalist Christian society.

Is the fact that van Gogh’s Muslim murderer remained unrepentant any more shocking than the fact that Gaither’s murderer, once he found Jesus, believed himself saved but his victim hell-bound? In the Bible, there are numerous references to “infidels” being righteously slaughtered by either God or his followers. Gays cannot be found among God’s favorites, either. Why then would Fundamentalist Islam be any more “backward” – or dangerous – than Fundamentalist Judaism or Fundamentalist Christianity? Well, the answer would be that most Islamic countries lack a secular political establishment to keep in check religious extremism. But if, say, the Bible were the rule of law in Europe and the Americas, would gays – or women – be any better off than their North African and West Asian counterparts? The point is: Is singling out one religion as the source of all evil not only ultimately counterproductive but also both myopic and hypocritical?

In Submission Part II, gays “are called Allah’s creatures,” Ayaan Hirsi Ali explains. And why shouldn’t they be? That would be a good reminder to the ruthless, oftentimes murderous, religious dictatorships that predominate in Islamic countries. However, the question remains whether other filmmakers – or even Hirsi Ali herself – will address the issue of submission to religious dogma while depicting the plight of gays and women under traditional Christianity, Judaism, Hinduism, Buddhism, and other non-Muslim patriarchal cultures.

* The “Liberal” in the title basically refers to freedom of enterprise and ownership.

I agree with your statement, “In sum, religious people of *all stripes* should open up. Their beliefs are their beliefs; they should not be imposed on others.” But I do not think the film is saying only Islam but is trying to open our eyes up to what is happening in that religion, because this is her experience. She is not Christian and knows little to nothing about the Christian experience. To criticize them for making a film to educate us on Islam is not myopic:; I never heard a statement that this is only happening in Islam. But is happening there and we need to start a discussion about it.

Please do not judge about a religion only by watching some act of fake followers.
I assure u as a muslim that I’m the firt enemy of these kind of humen (However I’ve doubt about their humanity).

See the film. It’s not hard. One Google search search for “Submission part 1” will find it.

Now, if anyone knows where to find a copy of “Submission, Part II”, I’d love to know.

First of all, thanks for writing. Unfortunately, I don’t agree with some of what you have to say.

I haven’t seen “Submission,” but from what I’ve read the film is about Islam — anywhere. Those verses of the Koran as heard/seen in “Submission” can be applied to life anywhere, from The Hague to Jakarta.

I spent two years in Holland. Met lots of Muslims, many of whom had nothing against gays. Met Catholics who badmouthed — and in one ugly instance discriminated against — gays. The center-right (much more right than center, nowadays) Christian-Democrats were (while the opposition party) against the legalization of gay marriage. Sure, I have no doubt that they saw gays as human. Second-rate humans, that is.

The good thing about Holland is that Christianity — despite all the myriad Christian holidays — is not the law of the land. Else, gays (and women) would be in big trouble.

Also, it’s worth noting that Holland has a large percentage of citizens — more than 40% — who don’t follow any religion, in addition to nearly 10% of Muslims, Hindus, Buddhists, Jews, etc. To say that “We in the Netherlands are christians” is an incorrect generalization.

In sum, religious people of *all stripes* should open up. Their beliefs are their beliefs; they should not be imposed on others.

I think you guys are mission the point..

These movies are about the Muslims in the Netherlands and their views that gays are not human. We in the Netherlands are christians however gays are allowed to marry etc. Muslims (who are immigrants) do not agree and are cousing a great deal of problems (generally speaking only the second generation muslims). In my eyes and those of van Gogh and Hirsi Ali these Muslims have to addapt to our culture and the rules that are acceptable in our country. If they don’t like them they can go to a country that shares their values. If you want to life in our country you have to respect our rules and way of thinking. You do not have to agree, respect is all we ask for. Everything is open to debate (or used to be, after the murders on Fortuyn and van Gogh is doesn’t look like it anymore) but violence has to be avoided at all costs.

So in my opinion these submission movies are targeting the Dutch society not the Islam or Muslims. Just the issues that we are facing in the Netherlands

p.s. I know late reply (2 years) just was searching for the second submission movie (don’t think it has ever been produced) and found this website

So, where can we find a copy of the film?!