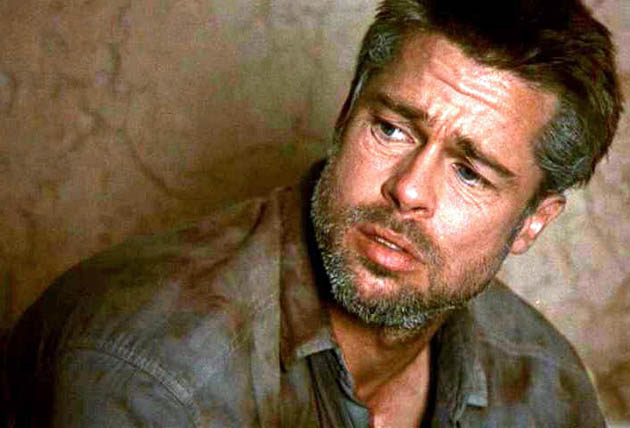 The 2006 Best Picture nominee Babel is the next feature in the Academy of Motion Picture Arts and Sciences’ “Great To Be Nominated” series. Screenwriter Guillermo Arriaga and director Alejandro González Iñárritu’s multi-language, globe-spanning drama will be screened on Monday, Aug. 11, at 7:30 p.m. at the Academy’s Samuel Goldwyn Theater in Beverly Hills.

In Babel, one tragic event in the Moroccan desert reverberates across the globe, reaching the United States, Mexico, and Japan. Among those involved in this international tangle are Brad Pitt, Cate Blanchett, Rinko Kikuchi, Adriana Barraza, Gael García Bernal, and Elle Fanning.

After Babel, Arriaga and Iñárritu – who had previously collaborated on 21 Grams and Amores perros – decided they spoke different languages. Following that much-publicized falling out, Arriaga set out to launch his own directorial career. His feature-film debut, The Burning Plain, revolves around a mother-daughter (Kim Basinger-Charlize Theron) relationship; it is one of the films in competition for the Golden Lion at this year’s Venice Film Festival.

Chris Renaud and Mike Thurmeier’s Oscar-nominated animated short No Time for Nuts will be screened prior to the feature.

Including Babel, there are three films remaining in the series. Tickets are $5 for the general public and $3 for Academy members and students with a valid ID. 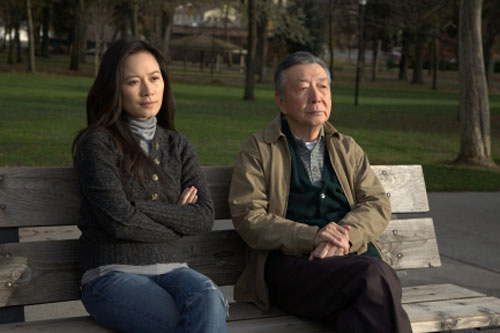 Faye Wu and Henry O in A Thousand Years of Good Prayers.

The four features consist of two sneak previews and two “revised versions” of older Wang efforts. The sneak previews are A Thousand Years of Good Prayers, winner of the best film award at the 2007 San Sebastian Film Festival, and its companion piece, Princess of Nebraska. The revised versions are a “new cut” of Dim Sum: A Little Bit of Heart (1985), and the director’s cut of The Chinese Box (1997).

Wayne, whose credits also include Chan Is Missing, The Joy Luck Club, Smoke, and Maid in Manhattan, has directed both classy (the aforementioned The Joy Luck Club) and hard-to-watch (Smoke, Because of Winn-Dixie) fare. The release cut of The Chinese Box was a meandering mess, but it’s hard to know who was at fault for that one.

As for A Thousand Years of Good Prayers, which was screened at last year’s AFI Film Festival, it is neither Wang at his best nor at his worst. This story about the difficult relationship between a Chinese father (played by American actor Henry O) and his Americanized daughter (Faye Wu) is at its strongest during its quieter, slice-of-life moments, and at its weakest when it slips toward melodrama. Henry O, however, is fully believable all the way. If there’s any justice, he should be up for critics’ and Academy awards later this year.

The Wayne Wang films are being presented in collaboration with the Asia Society of Southern California (website).

Schedule and synopses from the American Cinematheque’s press release.

Sneak Preview! A THOUSAND YEARS OF GOOD PRAYERS, 2007, Magnolia Films, 83 min. Once again, director Wayne Wang beautifully explores the struggle between freedom and traditional family duty with the story of a father and daughter who’ve become strangers as a consequence of the censorship of Maoist China. Mr. Shi (a superb performance by Henry O), a retired widower from Beijing, comes to the United States to help his only daughter, Yilan (Faye Yu), through a divorce, but he soon learns that his goals are in direct conflict with her desire to move on. Winner of four awards at the San Sebastian Film Festival.

New Cut! DIM SUM: A LITTLE BIT OF HEART, 1985, 88 min. In this heartfelt gem, a young woman in Chinatown struggles between her desire to marry and her need to take care of her aging mother. One of Wayne Wang’s earliest and best examinations of the tension between individual desire and familial responsibility. Discussion in between films with director Wayne Wang.

Sneak Preview! PRINCESS OF NEBRASKA, 2007, Magnolia Films, 77 min. Director Wayne Wang, in his exploration of the young generation of the new China, conceived this film as a companion piece to A Thousand Years of Good Prayers. It follows 24 hours in the life of Sasha, a young Chinese woman who is four months pregnant and travels to San Francisco to have an abortion and confront her lover’s male friend.

Director’s Cut! CHINESE BOX, 1997, Lionsgate, 99 min. Dir. Wayne Wang. In the six months before the 1997 British handover of Hong Kong, cynical writer Jeremy Irons falls desperately in love with Gong Li while simultaneously obsessing over a mysterious, scarred Maggie Cheung. The sophisticated screenplay by ace screenwriters Larry Gross and Jean-Claude Carriere allows Wang to craft yet another of his masterpieces of cultural collision. Discussion in between films with director Wayne Wang. 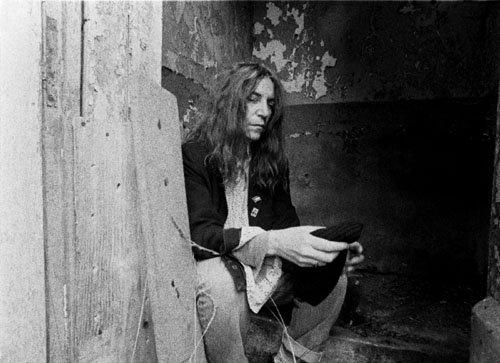 A week of rock ‘n roll features and documentaries will be presented at the American Cinematheque’s Aero Theatre in Santa Monica beginning August 28. Among those are Jonathan Demme’s Neil Young: Heart of Gold, Richard Lester’s A Hard Day’s Night, and the Los Angeles premiere of Patti Smith: Dream of Life (above), directed by Steven Sebring.

Schedule and synopses from the American Cinematheque’s press release:

STOP MAKING SENSE, 1984, Palm Pictures, 88 min. Jonathan Demme revolutionized the art of shooting rock concerts with this innovative and lively record of the Talking Heads. The film expertly captures the music’s energy, fusing cinema with performance to create something more than the sum of its parts. Artistically ambitious, filled with joyous but controlled energy, this is considered by many critics to be the best concert film of all time.

L.A. Premiere! PATTI SMITH: DREAM OF LIFE, 2008, Palm Pictures, 109 min. Twelve years in the making, the first film directed by fashion photographer Steven Sebring stitches together layer upon layer of human experience to paint a portrait of Patti Smith, the artist as a tireless and dynamic worker for music, poetry, peace, family and friends.

A HARD DAY’S NIGHT, 1964, Miramax, 85 min. Director Richard Lester’s brilliant, carefree comedy captured the early Beatles at their best, setting the tone for the ’60s revolution. From the restless, handheld camerawork and sleight-of-hand jumpcut editing, writer Alun Owen’s surreal day-in-the-life script and George Martin’s sprightly score (both Oscar-nominated) to the Beatles themselves, this is the essence of the monochromatic early ’60s.

IMAGINE: JOHN LENNON, 1988, Warner Bros., 100 min. Dir. Andrew Solt. A documentary about former Beatle John Lennon that contains extensive material from Yoko Ono’s personal collection as well as interviews with Ono, Lennon’s first wife, Cynthia, and sons Julian and Sean. Narrated in Lennon’s own voice, IMAGINE was taken from the 240 hours of personal film and video from the star’s private collection. A unique film that gives fans a look at the enigmatic pop revolutionary that is unavailable anywhere else.

THE LAST WALTZ, 1978, MGM Repertory, 117 min. “It Started as a Concert. It Became a Celebration. Now It’s a Legend.” On Thanksgiving Day 1976, 5,000 cheering fans gathered for the historic farewell concert of The Band. Martin Scorsese provides fascinating interviews with Band members, but the film’s real hook is the stage show: A rotation of rock legends that includes Van Morrison, Joni Mitchell, Paul Butterfield, Bob Dylan, Eric Clapton, and Neil Young join The Band in one of the greatest concert films ever made.

FESTIVAL EXPRESS, 2003, ThinkFilm, 90 min. Dir. Bob Smeaton & Frank Cvitanovich. Set in 1970, FESTIVAL EXPRESS was a multi-band (including Janis Joplin, The Band and The Grateful Dead) extravaganza. What made it unique was that it was portable; for five days the bands and performers lived, slept, rehearsed and did countless unmentionable things aboard a customized train that traveled from Toronto to Calgary to Winnipeg, with each stop culminating in a mega-concert. FESTIVAL EXPRESS combines long-lost archival material with contemporary interviews to document a little-known but seminal moment in rock history.

THE OTHER SIDE OF THE MIRROR: BOB DYLAN LIVE AT THE NEWPORT FOLK FESTIVAL, 2007, MLF, 83 min. This brand-new film from Academy Award-winning director Murray Lerner documents the remarkably swift metamorphosis of Bob Dylan from scrawny, Guthrie-inspired protest singer to Ray-Banned rock icon in just three years. The footage has been newly transferred from the original negative with matching audio restoration.

Guys and Dolls Remake with Channing Tatum + Prince Charming Richard Madden & ‘Into the...