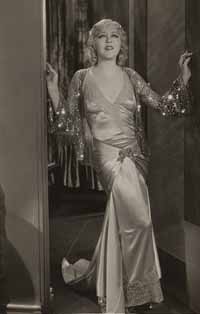 Womanizing businessman Wayne Carter is hardly a looker, but he’s got them dollar bills. Loads of them. The only woman in New York City left unimpressed by his millions is, of all people, the unemployed Helene Andrews.

Perhaps the fact that Helene dresses like a man and has dark hair might explain her uprightness. Her sister Lita, however, wears tight clothes and is a total blonde. She’s a Good Girl, too, mind you, but she wants to get Better.

The mustached Lowell Sherman, a veteran of more than a decade in silent films, plays Carter; the delightful Irene Dunne, long before she began displaying her screwball bent, plays the straight-man, Helene; and Claudia Dell is the Good Girl Gone Better.

Bachelor Apartment is a pre-Code RKO comedy (with touches of drama) that could have been much funnier had its makers decided to be a little more daring (even Lita marries for love!), and if Sherman – who also directed – had done a little homework beforehand. For instance, by watching Ernst Lubitsch’s Paramount films he could have learned a thing or two about comic timing. (Warren William’s Warner Bros. films might have taught Sherman how to convincingly play an urbane man of the world, but William’s career as a classy film heel only took off in late 1931.)

Granted, Bachelor Apartment does offer a few risqué moments and even a couple of chuckles. There’s talk implying a happy ménage involving Norman Kerry, Ivan Lebedeff, and Claudia Dell, while silent screen superstar Mae Murray (photo) has one scene in which she slips into something way comfortable, showing for all to see the actual meaning of the word negligée. And down below are a couple of examples of good double entendres (if you’re imaginative enough, the second example may be a triple entendre), credited to J. Walter Ruben:

Butler, holding a necklace: “Do you suppose the lady lost anything else [the night before], sir?”

Carter: “I’ve been doing some much needed thinking.”

Lee Graham (Norman Kerry): “So have we [Kerry, Lebedeff, Dell].”

Ruben’s screenplay is from a story by one of the future Hollywood Ten, John Howard Lawson. Lawson’s sensibility may be found in the class issues depicted in the film – Park Avenue dwellings “are just around the corner, but a million miles away” from New York City’s tenement buildings – but this being a Hollywood movie, class lines magically disappear before the final fadeout.

Ultimately, Bachelor Apartment is memorable simply because of Mae Murray’s presence. The actress does quite a bit of overplaying, but in time she could have developed into an older Genevieve Tobin, or even into a more interesting – and considerably saucier – Billie Burke. It’s indeed a pity that this was to be Murray’s next-to-last screen appearance.

Far away, in the New York of tenement buildings, Helene Andrews (Irene Dunne) and her younger sister Lita (Claudia Dell) try to eke out a living. Helene believes that hard work at an office – if she can actually land a job – will eventually help relieve their financial dire straits. Lita, on the other hand, believes that hard work at a penthouse will help boost their fortunes right away.

When Helene tries to stop Lita from making a Big Mistake, she meets Carter at his apartment. (Little did Helene know that Lita had a date with the butler – thinking he was a millionaire.) Carter takes an immediate liking to Helene. The feeling is not mutual. But knowing a good opportunity when she sees one, Helene finally accepts Carter’s offer to work as his secretary.

Lowell Sherman had played opposite Mae Murray in The Gilded Lily, directed by Murray’s then husband Robert Z. Leonard. At the time, Murray was a superstar. Besides Bachelor Apartment, Sherman directed and played opposite Murray in her next – and final – film, High Stakes, also released in 1931.

According to Muriel Babcock’s article “Old-Timers of Films Return,” Mae Murray was cast in Bachelor Apartment by being at the right place (a party) at the right time (when star/director Lowell Sherman was trying to think of an actress to play the naughty socialite in his film.) Los Angeles Times, Feb. 1, 1931.

At the time Bachelor Apartment came out, Mae Murray told Alma Whitaker of the Los Angeles Times that she had been making personal appearances on behalf of RKO and Paramount Publix for two and a half years. Murray, one of the biggest stars of the silent era, had lost most of her money – and had sued to recoup it.

Regarding her outlandish gowns in the film, Murray remarked, “Of course, they all emphasize my figure; people expect that of me.” Los Angeles Times, Jan. 18, 1931.

According to Jack Hamilton in They Had Faces Then, Claudia Dell later became a receptionist at a beauty salon. She died in 1977.

After losing her career, her money, and her son (in a nasty court battle with former husband David Mdivani), Mae Murray also lost her already fragile emotional balance. As per They Had Faces Then, in 1964 the penniless former millionaire was found wandering aimlessly in the streets of St. Louis. She died at the Motion Picture Country Home the following year.

“Sherman directs as well as enacts the leading role and his direction equals his portrayal. And his portrayal is outstanding. J. Walter Ruben, who adapted the picture form John Howard Lawson’s story and wrote the dialogue, comes in for his share of praise, too. His screenplay is as engrossing as his dialogue is brilliant.” Whitney Williams, Los Angeles Times.

Kellan Lutz Hercules Movie Is Critical Catastrophe + ‘Montezuma’: Castle in the Air or Next...

Andre your review of the Bachelor Apartment is so accurate I expected
more because of Lowell’s presence especially with films like What Price
Hollywood and The Garden of Eden, or even Way Down East. But like you
said Mae Murray is the star attraction, oh that naughty negligee, how
scandalous, and she was still red hot, double chin and all. She was
too perfect for screwball, that would have really been quite a
comeback. Too bad that the whole Norma Desmond thing happened.