Baghead, the newest release by the brothers Jay and Mark Duplass, played at Montreal’s Just For Laughs Film Festival to a packed audience. Baghead has been advertised as a creepy movie about young people in a cabin in the woods, who are stalked and hunted. In truth, Baghead is more about four young extras who decide to take control of their own future by writing a feature film starring themselves, and then setting out to make it.

Brothers Matt and Chad (Ross Partridge and Steve Zissis) convince their friends Catherine and Michelle (Elise Muller and Greta Gerwig) to go to their uncle’s cabin for the weekend to write and make a film. Matt and Catherine are an on-again, off-again couple, while Chad is trying to go after Michelle, who sees him as just a friend.

While at the cabin, after the foursome enjoy some liquor Michelle goes to bed early. Later on, a man appears in her bedroom wearing Matt’s clothes and with a paper bag over his head. She undresses, thinking that Matt has accepted her flirtations. When she discovers it is not Matt, she freaks out and runs for help.

That leads to the birth of their movie idea about two couples in the woods, with a crazy baghead torturing them. Chad asks Matt if they can write the script so that Chad and Michelle can play boyfriend and girlfriend – sure, what are brothers for? The group tries to work on the story, but instead end up drinking and participating in some heavy petting. When a mysterious person with a paperbag on his head appears around their cabin, they make plans to leave.

Baghead was shot in a handycam style that makes it seem like a metafictional film, as that approach makes what we see look like the result of the characters’ script ideas. The dialogue is clever and quite funny, for, in fact, Baghead is much more humorous than frightening. Even so, there are a few “shocking” moments, and as a plus the four leads have great chemistry.

Overall, Baghead is just a fun-and-easy, 84-minute indie piece. The funniest things about the film, however, are that it was marketed alongside a horror film with similar features (cabin, young people, sex, horror), and that the Duplass’ effort is not at all what one would expect to see from the trailer. The sexual scenes are honest, awkward, and humorous (including a great masturbation bite); the horror moments are realistic and creepy; while the camerawork and loose script, which must have included numerous ad-libbed lines, are quite effective. All that makes Baghead a film that far surpasses its ineffectual trailer promo. 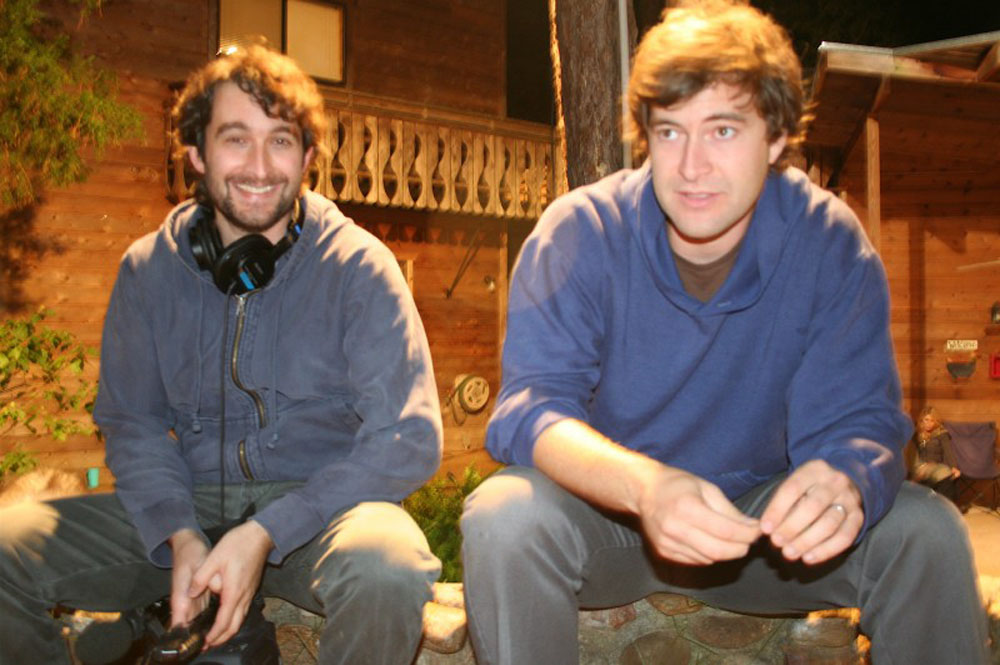 With Baghead, the Duplass brothers (above) have created another successful indie, one that is in fact more accessible than their previous feature, The Puffy Chair. Their next one, The Do-Deca-Pentathlon, which is set for release in 2009, also stars Steve Zissis.

It’s nice to see Indie film getting attention. The Duplass brother should be proud of there film. Lets hope they can create more.