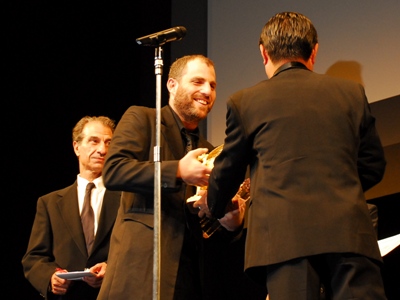 Eran Kolirin’s The Band’s Visit, about an Egyptian police band stranded in a small Israeli town, was the top winner at the 2007 edition of the Tokyo Film Festival. The Band’s Visit has also won the Jury Coup de Coeur Award at the Cannes Film Festival (in the Un Certain Regard sidebar), two European Film Awards, and eight Ophir Awards from the Israeli Film Academy. The film is also up for a Spirit Award for best foreign-language film. The US-based Academy was much criticized for disqualifying The Band’s Visit from the Best Foreign Language Film Oscar category because most of the film’s dialogue is in English.

Written by Diablo Cody and directed by Jason Reitman, Juno is a comedy about a resourceful Minnesota teenager (Ellen Page) who becomes pregnant and then sets out to get things ready for the upcoming baby.

FASTWEB PRIZE FOR THE PREMIERE SECTION
Into the Wild, Sean Penn, U.S.

Jury: President: Denis Tanovic. Peoples jury comprised of 50 “film lovers of all ages who go to see every kind of film imaginable; fans, but not fanatics.” Of those, thirty are non-fanatics from Italy; 20 come from elsewhere in Europe.

The 44th Golden Horse Award nominees were announced on Oct. 27.

The 44th Golden Horse Award winners were announced on Dec. 8.

Israel’s submission for the best foreign-language film Academy Award, Eran Kolirin’s The Band’s Visit, has been disqualified for the 2007 Oscar in that category because more than half of the film’s dialogue is in English.

“The real question is why this situation came to pass at all,” says Shaviv. “There are clear rules posted on the Oscar Web site that insist that nominated foreign language films appear ‘predominantly’ in the primary language of the submitting country. [sic] The Band’s Visit was in clear violation of this pre-requisite. Is it arrogance or sheer lack of organization that prevented Israel’s Academy from slightly altering its film submission to meet the US Academy’s requirements? The Jerusalem Post predicted the problem in September, so why has the Israeli Academy been caught unprepared?”

Regarding the “sic” above: The U.S. Academy has changed its rules, allowing countries to submit films spoken in a language other than the official language(s) of the submitting country. That’s why last year Canada was allowed to submit Deepa Mehta’s Hindi-language drama Water.

The Band’s Visit, which has received widespread praise at several film festivals, revolves around an Egyptian police band stranded in a small Israeli town. Beaufort, the Best Director Silver Bear winner at this year’s Berlin Film Festival, tells the story of the last Israeli battalion to leave Lebanon.

In her article, Shaviv adds that “Jerusalem Post film critic Hannah Brown speculates that voting members of the US Academy will more easily relate to the Israelis portrayed in a military drama than those in Kolirin’s apolitical film.”

Even though The Band’s Visit seems to be anything but apolitical, Brown could well be right. Academy members tend to like their nominated films to display their Messages in bold, capital letters. In turn, this predisposition for the obvious means that Academy members – especially those who vote in the foreign-language category – need to have their cinematic horizons expanded quite a bit.

The last time an (official) Israeli entry received an Academy Award nomination was in 1984. The movie in question, Uri Barbash’s Beyond the Walls, portrays the struggles of Arab and Israeli inmates at a corrupt Israeli prison facility.

In 2005, the German-Israeli-Palestinian co-production Paradise Now also received a best foreign-language film nod, but as a Palestinian entry.

In the Toronto Globe and Mail, Marsha Lederman discusses Nick Wilson’s documentary The Prince of Pot: The US vs. Marc Emery.

Wilson’s documentary focuses on the U.S. government’s never-ending multibillion-dollar War on Drugs (the older sister of the equally ineffectual and wasteful War on Terror) and one of its targets, Canadian citizen Marc Emery, head of the B.C. Marijuana Party and owner of a mail-order marijuana-seed distribution business.

In her article, Lederman writes that “in 2005, the U.S. Drug Enforcement Administration asked Canada to extradite Emery and two of his employees to face drug-trafficking charges for sending seeds south of the border. Vancouver Police moved in and arrested him.

“And it was that fact – the co-operation of a Canadian police force with American anti-drug forces – that drew Wilson in. ‘Emery is a symptom of a much bigger issue, which is Canadian sovereignty,’ Wilson says. ‘Who’s setting our priorities? Is it us or is it the Americans?’”

The Prince of Pot: The US vs. Marc Emery is one of three Canadian films at this year’s Vancouver International Film Festival focusing on marijuana’s legal limbo.

The other two are Brett Harvey’s The Union: The Business Behind Getting High and Weirdsville, a comedy directed by “proud pothead” Allan Moyle.

Written by Willem Wennekers, Weirdsville stars Scott Speedman and Wes Bentley (who was excellent as Chris Cooper’s unusual son in American Beauty) as a couple of pot smokers in Hamilton, Ontario, who get enmeshed with a quirky satanic cult.

“If there’s a reason these films have all found their way onto the big screen at this time, it’s as much about politics as it is pot,” adds Lederman. “With the current U.S. administration and its war in Iraq, the distinctions between Canada and the United States have never been so obvious. These Canadian filmmakers would like to see Canada distance itself from America’s war on drugs, too.”

Jennifer van Evra on the Vancouver International Film Festival at the Toronto Globe and Mail:

“While many Vancouverites were giving thanks and tucking into turkey dinners with their loved ones on Sunday [Thanksgiving in Canada takes place on the second Monday in October], Tracy D. Smiths family including her very traditional parents who drove in from Penticton were watching people win massive dildos and other sex toys at the world premiere of Smiths film, Taming Tammy. A modern-day adaptation of Shakespeares The Taming of the Shrew, the comedy centres around a sex-toy-party organizer who refuses to settle down, and the filmmaker marked the occasion by doling out several racy door prizes. Not surprisingly, some winners were a little reluctant to pick up their loot, said Smith at a packed after-party at Chivana. But actress Anne Marie Loder bravely accepted her rather grand prize, which was reportedly the first thing she had ever won.”

People’s Choice Award for Most Popular International Film
PERSEPOLIS, directed by Marjane Satrapi of Iran and Vincent Paronnaud of France

People’s Choice Award for Most Popular Canadian Film
SHE’S A BOY I KNEW, directed by Gwen Haworth of Vancouver

Most Promising Director of a Canadian Short Film
Director Anna McRoberts of British Columbia for THE WINDFISHERMAN.

Festival of British Films in Dinard

The 18th Festival of British Films winners were announced in Dinard, Brittany, on Oct. 7.

David Mackenzie’s Hallam Foe follows a young peeping tom (Jamie Bell) who tries to find both love and the real cause of his mother’s death. Six British films were in competition at the 18th Festival du Film Britannique de Dinard, which opened with an out-of-competition screening of Ken Loach’s social drama It’s a Free World.

Special Mention: Once by John Carney