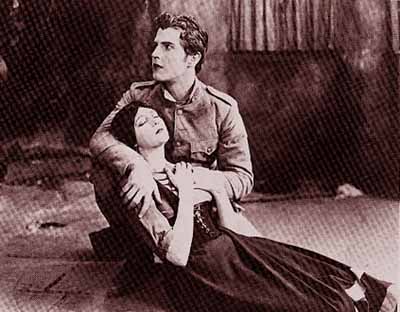 Barbara La Marr dies in the arms of star-in-the-making Ramon Novarro in Fred Niblo’s 1924 melodrama Thy Name Is Woman.

“Silent-film actress and screenwriter Barbara La Marr once said, ‘I take lovers like roses … by the dozen.’

“And she was hardly exaggerating: By age 19 she had been married three times, divorced and widowed. In her 20s, she married twice more. Still, she found time to become a world-famous actress, only to die at 29 a few months after collapsing on a movie set.

“Despite the fact that the Jazz Age screen goddess died in Altadena more than 80 years ago, she will ‘return’ as ‘hostess’ of a cemetery tour there in November.

“The tour is the centerpiece of the third annual ‘Walk Through Time,’ presented by the Pasadena Museum of History and the Pasadena Playhouse. This year’s version is titled ‘Channeling Hollywood.’ With the Mountain View Cemetery and Mausoleum as the setting, the tour will feature actors portraying long-dead Hollywood personalities, most of whom occupy final resting places at the Altadena cemetery.” [La Marr’s remains can be found in the Hollywood Forever Cemetery.]

“She may have been the only screenwriter to persuade a dictator to appear in a film: Benito Mussolini played himself in the now-vanished 1923 film The Eternal City, which La Marr starred in and for which she was reported to have done uncredited writing and producing.”

Rasmussen’s article is well worth a read, even if bits of information in it seem questionable.

Did Mussolini really play himself in George Fitzmaurice’s now lost The Eternal City, or did the film merely use what amounts to documentary footage of the Italian dictator?

(According to A. Scott Berg’s Goldwyn, “one mob scene clearly depicted two men standing on the balcony of the royal palace – none other than King Victor Emmanuel and Benito Mussolini. When the Fascisti caught wind of the film and demanded its confiscation, Fitzmaurice and his crew quickly left the country. Arthur Miller, the cameraman, smuggled the negative safely out of Italy. It was [producer Samuel] Goldwyn’s first experience filming abroad and his last.” Now, why Mussolini’s followers would be so angry remains unclear, as the film’s hero, played by popular 1920s leading man Bert Lytell, is a Fascist.)

I’m not sure about Don Gallery’s story that La Marr was given heroin after injuring herself on the set of Souls for Sale. Morphine, perhaps? And if producer Paul Bern fathered Gallery, then I’m assuming he wasn’t impotent as it’s been widely speculated. (Bern’s suicide following his marriage to Jean Harlow was one of the big scandals of the early 1930s.)

Also, I don’t know about Barbara La Marr dancing with Ramon Novarro, though they did appear together in three films: Rex Ingram’s 1922 version of The Prisoner of Zenda and his 1922 dark melodrama Trifling Women (a lost film that in several ways – characters, visuals, chimp – reminds me of Sunset Blvd.), and Fred Niblo’s 1924 melo Thy Name Is Woman.

And finally, perhaps La Marr did compare her lovers to her roses, but in those days studio publicists came up with all sorts of quotes and stories to match their stars’ screen personas. Since La Marr usually played vamps on screen, she was supposed to sound and behave like one off-screen as well.

Barbara La Marr, known as The Girl Who Is Too Beautiful, was MGM mogul Louis B. Mayer’s inspiration when he renamed Hedy Kiesler as Hedy Lamarr.

The Birth of Hollywood + Early Film Version of The Wizard of...

I didn’t know Paul Bern had children. Can you please elaborate?

And here’s an homage to Jimmy Bangley:

Greetings,
I stumbled upon this…if you’re talking about Jimmy Bangley, I’m very sorry to hear it. I was a librarian at AFI in the early 90s and researched La Marr, hoping to write a biography myself, but there was SO much contradictory information. I also began to think it would be more fun to write a novel about the whole period, and I still plan to. I corresponded with Mr. Bangley and gave him all my notes.

Ideas of beauty have definitely changed in the last 80 years.

Not that I’m aware of. I know someone who was working on one, but he died a few years ago.