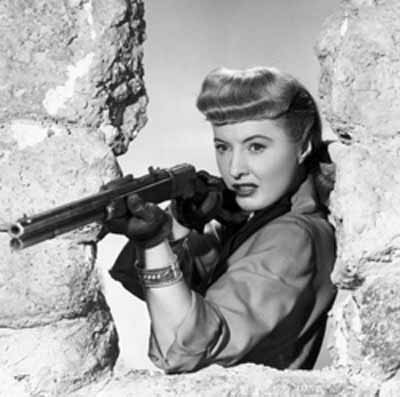 Barbara Stanwyck in The Furies.

“A Lady to Talk About: The Films of Barbara Stanwyck” is the title of the retrospective being presented by the UCLA Film & Television Archive to celebrate Barbara Stanwyck’s centennial.

The good news is that it is all about Barbara Stanwyck, one of the greatest performers of the last century. The not-so-good news is that just about every one of the films found in the retrospective are easily available on DVD, video, or on Turner Classic Movies. Apart from two mid-1950s Universal releases, Douglas Sirk’s classy sudsers All I Desire and There’s Always Tomorrow, you won’t find any Stanwyck rarities in the program even though several of her films (e.g., Ten Cents a Dance, The Locked Door, The Moonlighter) are rarely – if ever – shown anywhere.

All of the upcoming films – from the Pre-Code Night Nurse to the cult Western Forty Guns – are worth watching, if only because Stanwyck is in them. She is particularly intriguing in The Furies, Anthony Mann’s melodramatic Western with enough psycho-sexual subtext to keep Freudians scratching their heads for decades.

Stanwyck’s character in Meet John Doe is similar to those she played in her two other 1941 releases, The Lady Eve and Ball of Fire: the worldly, amoral woman who falls for an “innocent” man played by actors (Gary Cooper, Henry Fonda) much too old for that sort of role. It should be noted that the mommy/lover character had also been previously featured in two of Frank Capra biggest hits, Mr. Deeds Goes to Town and Mr. Smith Goes to Washington, with Jean Arthur nursing, respectively, Cooper and James Stewart.

In Ladies They Talk About, Barbara Stanwyck is a tough-talking jailbird. Perhaps not her greatest performance, but an engrossing one all the same. Ball of Fire is unusual in that Stanwyck’s leading man, Gary Cooper, somewhat cast against type as an intellectual, is the one who delivers the most effective performance.

Stanwyck could be a tough talker in real life as well. Or at the very least she was able to come up with some serious putdowns, once referring to Bonanza star Lorne Greene as “the Loretta Young of the West.” Context: Bonanza and The Big Valley, which costarred Stanwyck, were two major television series of the 1960s.

In this unusual love story from pre-Code Hollywood, Stanwyck portrays an idealistic American missionary in wartorn China who finds heself the unwilling guest of the eponymous general. The turmoil continues as Stanwyck falls for her captor. One of Columbia’s few “prestige” productions, General Yen’s first-class script rewards audiences with a liberal dose of pre-Code sensibilities. Miscegenation, so soon to become taboo in Hollywood, is here made palatable and attractive as a natural outcome of passions molded by tumultuous times.

Stanwyck stars as the notorious Lily Powers, an unhappy waitress in her father’s grimy speakeasy. Tired of being expected to serve more than just drinks to the salivating patrons (and armed with a new Nietzschean philosophy), Lily makes her way to New York. There she sleeps her way to the top of a high-rise office building, laying waste to multitudes of men on every floor. This restoration reinstates five minutes of censored cuts there were recently discovered after 70 years.

In this screwball version of Snow White and the Seven Dwarfs, burlesque queen Stanwyck hides out from the law by moving in with linguistics professor Cooper, the youngest in a household of seven academics. There she teaches him the slang he needs for his research, and in the process, opposites attract. The role of the evil stepmother is filled by the police and Stanwyck’s gangster boyfriend (Andrews). This classic Hawksian setup (the disruption of an all-male group by a woman who is one of the boys) is competently fleshed out in Wilder and Brackett’s script, complete with snappy dialogue and double entendres. Stanwyck received her second Best Actress nomination for her performance.

In Capra’s first independently produced film, Stanwyck plays a “sob-sister” newspaper reporter fired for not producing enough “fireworks” to increase circulation. To save her column, she fabricates a letter from a “John Doe” who protests the dismal state of Depression-era America by committing suicide on Christmas Eve. Stanwyck soon finds her real John Doe in former baseball pitcher Long John Willoughby (Cooper). The film became one of the year’s top ten money-makers and won Capra long-coveted critical praise.

In this beautifully shot and directed film by German émigré Robert Siodmak, Stanwyck stars as Thelma Jordan, an aging femme fatale who intrigues a young detective and makes him the scapegoat for the murder of her rich aunt. However, Thelma soon finds herself falling in love with the detective. Stanwyck’s soft-hearted femme fatale provides a stark contrast to her more famous turn as the cold, manipulative Phyllis Dietrichson in Double Indemnity.

LADIES THEY TALK ABOUT
(1933, United States) Directed by Walter Bretherton and William Keighley

In this campy expose of female prisons, Stanwyck plays Nan Taylor, a woman who acts decoy during a bank robbery led by her gangster boyfriend. Nan later attracts the interest of radio evangelist David Slade (Foster), who promptly turns her over to the authorities after she confesses to her part in the crime. Sentenced to prison, Nan becomes convinced that Slade is behind her downfall and plots to hunt him down upon her release. The unexpected result of her scheming is not murder, however, but marriage. Bretherton’s film boasts all of the fast-paced dialogue and stark imagery associated with Warner’s gangster films of the era, coupled with the entertaining twist of a female protagonist.

Stanwyck’s standout performance in this classic screwball comedy ranks among her most memorable. As con-artist Jean Harrington, she falls in love with clumsy and rich ophiologist Charlie Poncefort Pike (a hilarious Fonda). When Charlie discovers her shady occupation, he breaks off their engagement. Jean seeks revenge by posing as the Lady Eve Sidwich of England and successfully convincing the clueless Charlie to marry her. The film is also notable as Stanwyck’s first collaboration with renowned costume designer Edith Head, whose innovative look would turn Stanwyck into a Hollywood fashion icon.

ALL I DESIRE
(1953, United States) Directed by Douglas Sirk

Stanwyck first worked with German émigré director Sirk, famous for his critiques of small-town American life, in this family melodrama set in early twentieth century Wisconsin. Ten years after abandoning her family for a career on the stage, Naomi Murdoch (Stanwyck) returns to see her daughter’s high school play. Naomi’s reappearance ignites a town scandal, and old conflicts return to the fore. While Sirk wanted to retain the book’s darker ending, in which the town forces Naomi to leave Wisconsin yet again, producer Hunter substituted a happy ending that reunites the family.

Re-teaming with Double Indemnity co-star Fred MacMurray, Stanwyck’s second film with Sirk casts her as Norma Miller Vale, a cosmopolitan career woman with a flourishing fashion business. When Norma runs into former flame Clifford Groves (MacMurray), a bored suburbanite who feels that his wife (Bennett) and family take him for granted, the two are tempted to rekindle their romance. Clifford’s son Vinnie eventually spots the two together and suspects adultery, engendering the domestic melodrama that drives this underrated Sirkian scrutiny of hypocritical American morality.

This Mamoulian film follows the moral dilemmas of violinist turned boxer Joe Bonaparte (Holden, in his first starring role). Stanwyck’s character, Lorna Moon, falls in love with Bonaparte and supports his interest in music, eventually convincing him to stop fighting. Stanwyck and Holden cultivated a life-lasting friendship on the set, and it was she who demanded that Holden stay in the film after Columbia president Harry Cohn expressed disappointment with his performance.

In her first Oscar-nominated performance, Stanwyck stars as Stella Dallas, a good-time factory girl who marries up but alienates her status-conscious daughter by refusing to give in to social snobbery. Stella’s defiant attitude comes at the expense of her mother-daughter relationship when she “gives up” Laurel to live with her father and have the life that she deserves. Coupled with King Vidor’s skillful direction and Samuel Goldwyn’s production, Stanwyck’s performance still evokes tears.

Fast-paced, sexy, and over the top, this medical melodrama follows the titular character (Stanwyck) as she uncovers a plot to starve two little girls to death for their inheritance. Stanwyck’s detective work, aided by a fellow nurse (Blondell) and her bootlegger boyfriend, ultimately saves the day in this pre-Code feature that wastes no opportunity to show plenty of lingerie. The actress proves herself as a tough and funny performer, with energy to spare.

Inspired by the life of Los Angeles-based evangelist Aimee Semple McPherson, Stanwyck’s second collaboration with Capra produced this riveting portrayal of the daughter of a fallen minister who curses his congregation for their hypocrisy. Vowing to turn her anger into cash by exploiting blind faith, she becomes “Sister Fallon,” who performs fake miracles in exchange for donations. Her scheme works well until a handsome blind man (Manners) captures her heart. The remnants of Semple’s church still exist on Glendale Blvd. in Echo Park.

Anthony Mann’s The Furies marked Stanwyck’s return to the Western genre after more than a decade from her turn as Annie Oakley in 1935. The film casts her as Vance, Walter Huston’s fiercely headstrong daughter who runs his ranch in New Mexico Territory. Vance faithfully protects her best friend, the Mexican-American Juan (Roland). When her new socialite stepmother (Anderson) dares to challenge her authority, Vance disfigures her with a pair of scissors. Stanwyck’s character offers an action-packed, cowgirl rebellion against patriarchy that foreshadowed her later work with Mann and her role as matriarch Victoria Barkley in the 1960s television series, The Big Valley.

In Fuller’s cult western, Stanwyck again plays an authoritarian ranch boss, Jessica Drummond, who rules Arizona with her posse of hired gunmen. When a new marshall (Sullivan) arrives to set things straight, the cattle queen finds herself falling, brutally, for the avowedly non-violent lawman. Fuller once said that “Forty Guns is a film about weapons…the story of a man for whom a weapon becomes a terrible thing. For ten years, he had not touched a gun, because he was honest with himself. When he takes his weapon, he must use it. He was conditioned to get involved.”

Stanwyck received her final Best Actress nomination for this noir melodrama skillfully directed by Jewish-Russian émigré director Litvak. Based on a popular 1943 radio program, producer Hall Wallis commissioned author Lucille Fletcher to adapt her radio play for the screen. Stanwyck delivers a chilling performance as Leona, a bed-ridden wife who accidentally overhears a murder plot over the phone. The suspense intensifies as she discovers that she is to be the victim of this murder engineered by her husband (Lancaster).

Based on the Clifford Odets stage play, Clash by Night has Stanwyck again working with a talented German émigré director (Lang), and supported by a strong cast that includes a young Marilyn Monroe. Stanwyck plays May, a disillusioned woman who returns to her fish cannery hometown and marries an old flame, fisherman Jerry (Douglas), even though she does not love him. When May falls for Jerry’s best friend, attractive film projectionist Earle (Ryan), she faces the difficult decision of choosing between love and family. Stanwyck’s performance earned her a Motion Picture Exhibitor “Laurel” award.