“Presenting Miss Barbara Stanwyck” will feature rare copies of American one-sheets as well as numerous international posters. It includes the only known surviving three-sheets for the The Locked Door (1929), Stanwyck’s first talking picture (she had made one silent in 1927, Broadway Nights), and Annie Oakley (1935), her first Western.

Also featured are the only known copies of the posters for Gambling Lady (1934), a “stylistically daring” poster for The Bitter Tea of General Yen (1933), and a handpainted wooden panel for Internes Can’t Take Money (1937).

Among the posters from Europe and South America are a double-paneled Argentinean poster for A Message to Garcia (1936), French one-panels for The Lady Eve (1941) and Double Indemnity (1944), numerous Belgium posters, in addition to a rare Italian “personality poster.”

The posters, spanning from 1929 through 1957, are on loan to the Academy from producer Mike Kaplan. “I’ve always wanted to show a major film figure through a poster exhibition so that one could appreciate the impact of his or her career through a medium other than film itself,” said Kaplan. “Stanwyck’s iconic, unique and often fierce artistry will be on display. It’s an enticing way to absorb a part of film history.”

“Presenting Miss Barbara Stanwyck” will be on display through Sunday, August 26. The Academy’s galleries, located at 8949 Wilshire Boulevard in Beverly Hills, are open Tuesdays through Fridays, 10 a.m. to 5 p.m., and weekends, noon to 6 p.m. The Academy will be closed during the Memorial Day holiday weekend – Saturday, May 26 through Monday, May 28, as well as on Wednesday, July 4 (Independence Day). For more information call (310) 247-3600.

“On the set she’s no Little Mary Sunshine,” Charlton Heston remarked about Barbara Stanwyck while they were both featured in the short-lived Dynasty spin-off The Colbys. Yet during her six-decade show business career on stage, in film, and on television, Stanwyck was widely regarded as a “consummate professional.” And clearly, the Ball of Fire, Double Indemnity, and Sorry Wrong Number star made a number of friends along the way.

Before the event, guests were treated to a reception featuring the Academy’s new exhibition, “Presenting Miss Barbara Stanwyck: Film Posters of the Indomitable Lady, from the Mike Kaplan Collection,” which opened to the public on May 17. 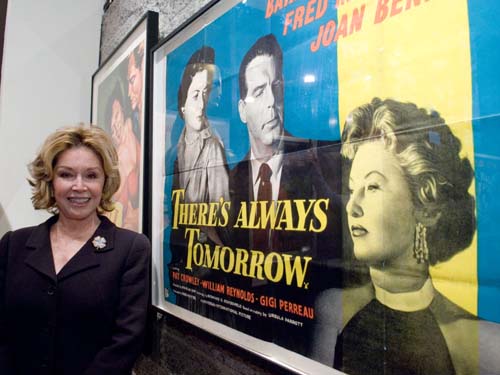 Pat Crowley, who had a supporting role in the 1956 melodrama There’s Always Tomorrow 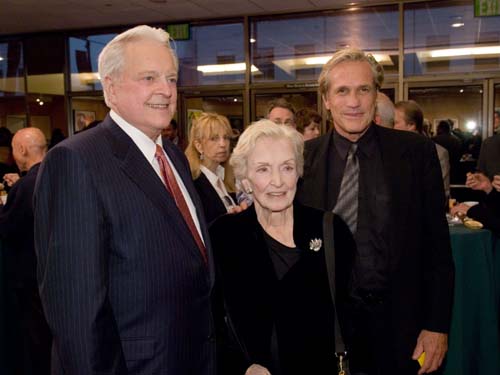 TCM host Robert Osborne and Nina Foch, who appeared in Executive Suite in 1954. Others in the cast were William Holden, June Allyson, Paul Douglas, Walter Pidgeon, Fredric March, Shelley Winters, and Barbara Stanwyck, who runs away with the heavy-handed melodrama directed by Robert Wise 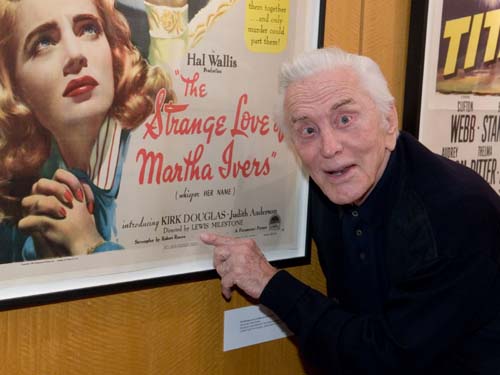 Kirk Douglas. The woman on the poster is Lizabeth Scott. Keep scrolling down… 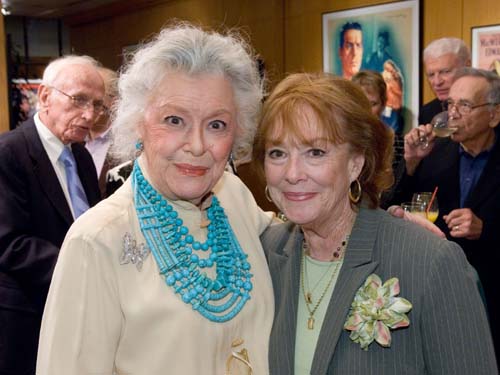 Ann Rutherford of Gone with the Wind and Andy Hardy fame, and Gigi Perreau, who had a supporting role in There’s Always Tomorrow. If I remember it correctly, Barbara Stanwyck gets to slap her in the film. 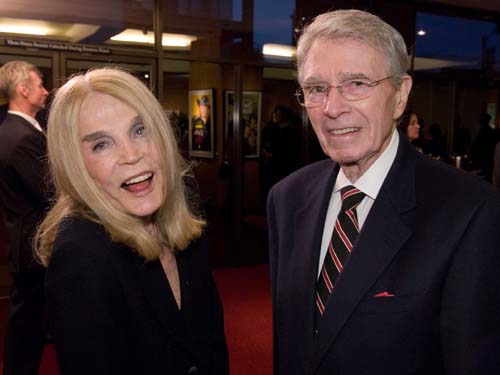