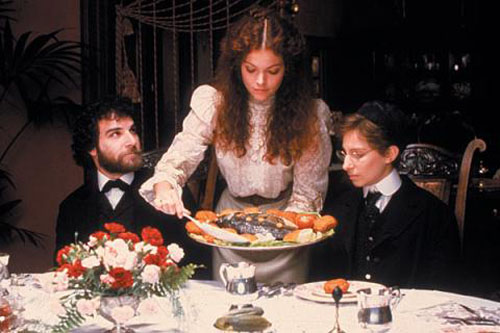 Barbra Streisand director and actress in Yentl with Mandy Patinkin and Amy Irving.

To date, only four women have received Academy Award nominations in the Best Direction category. Barbra Streisand isn’t one of them.

Streisand was considered a strong contender for the Best Direction Oscar shortlist for both the cross-dressing, feminist, period religious musical Yentl (1983) and the psychotherapy melodrama The Prince of Tides (1991). However, she was bypassed both times. Her omission led some to assert that the Academy of Motion Picture Arts and Sciences’ Directors Branch is composed of not only pedantic snobs, but sexist pigs as well.

If so, back in early 1984 they weren’t the Academy’s only pedantic pigs. Despite a Golden Globe win for Best Director, Streisand didn’t receive a single Oscar nomination for Yentl, a film she also co-adapted and co-produced, in addition to being its bespectacled androgynous star.

At the film’s Jerusalem premiere, when a reporter asked her why Yentl didn’t do better at the Oscars, Streisand replied, “In Hollywood, a woman can be an actress, a singer, a dancer – but [they] don’t let her be too much more.”

Yentl, the tale of a young Jewish woman who disguises herself as a man in order to enter religious training, ended up winning one Oscar out of its five nominations: Best Original Song Score/Adaptation Score for Michel Legrand, Alan Bergman, and Marilyn Bergman. That’s better than how the film fared at the Razzies, where it lost all three of its nominations, including a Worst Actress nod for Streisand.

Hollywood history repeated itself in 1991, as more accusations of snobbism, sexism, and anti-Streisandism followed another Barbraric snub…

“’Hello, gorgeous,’ said Barbra Streisand to her Oscar in 1969, the year she won it as Best Actress for Funny Girl. (In 1977, she won another as cowriter for Best Song.) Since then it’s been ‘Hasta la vista, baby,’ for the most famous hunk of celebratory hardware in the world and the multitalented, steel-willed actress-singer-producer-writer-director,” reported Newsweek at the time.

“Director – there’s the rub and the snub. When the nominations for the 1991 Academy Awards were released last week by the Academy of Motion Picture Arts and Sciences, The Prince of Tides was cited for seven nominations: best picture, best actor (Nick Nolte [right]), best supporting actress (Kate Nelligan), best adapted screenplay (Pat Conroy and Becky Johnston), best art direction, best cinematography, best original score. But no nomination [sic] for Streisand, its director and the driving force behind the movie, which has grossed $62 million since its opening on Christmas Day.” [Streisand did receive a nomination as one of the Prince of Tides producers.]

This time around, Streisand’s absence from the Best Direction category was even more glaring because, after all, her film did receive a Best Picture nod – and Streisand herself had been one of the five nominees for the Directors Guild Award.

Streisand reportedly watched the Oscar nominations’ announcement live while in London, later telling Variety that “I’m trying not to take it too personally. It’s hard because I don’t want to be bitter. I don’t take it as a personal affront. I look at it as a larger problem.” In reference to Warren Beatty’s Best Direction win for his pet project Reds, she added, “It’s as if a man is allowed to feel passionate commitment about his work, and a woman is allowed to feel passionate commitment only about a man.”

Ultimately, The Prince of Tides failed to win a single Academy Award.

Kinda bias that you didn’t even mention the other nominees those two years. In terms of worthy, Barbara was nowhere near the other contenders in 1991; Jonathan Demme, Ridley Scott, John Singleton, Oliver Stone, Barry Levinson was probably the only person who got nominated for the hype surrounding Bugsy, but even his directorial work is better than that of Streisand. She has a much better chance in 1984 even though that doesn’t necessarily mean anything, all of the other nominees (even Mike Nichols, Peter Yates, and Bruce Beresford) was more well-received than Yentl at the time despite not aging that well. Even without the sexism and Hollywood misogynistic, Streisand is still honestly a mediocre director

MY HUSBAND AND I WATCHED THE PRINCE OF TIDES TONIGHT, HIS FIRST TIME, MY SECOND. HE REALLY ENJOYED THE MOVIE AND I STILL LOVE IT. I’M TRYING TO FIND A HARD COVER COPY OF THE BOOK. I HAD ONE BUT HURRICANE KATRINA TOOK MY BOOK ALONG WITH SO MANY OTHER OF OUR ITEMS. WE ALSO BELIEVE BARBARA SHOULD HAVE WON TWO OSCARS. THANKS FOR HEARING ME OUT. … GEANIE