In celebration of John Wayne’s centennial, the Academy of Motion Picture Arts and Sciences will premiere a new restoration of The High and the Mighty (1954), an airborne disaster-about-to-happen melodrama. Made by Wayne-Fellows Productions, co-owned by John Wayne (who took over the company at that time, renaming it Batjac), The High and the Mighty was distributed by Warner Bros.

The Academy screening will take place on Thursday, May 24, at 7:30 p.m. at the Samuel Goldwyn Theater in Beverly Hills.

The event will be hosted by columnist Army Archerd, and will feature an onstage discussion with Wayne’s daughter-in-law Gretchen Wayne; William A. Wellman, Jr., son of the film’s director, William A. Wellman; and actresses Angie Dickinson and Nancy Olson, both of whom co-starred with Wayne in other films. (Dickinson in Rio Bravo; Olson in Big Jim McLain.)

Based on a bestselling novel by Ernest K. Gann (who also penned the screenplay), The High and the Mighty, a major box office hit upon its release, stars Wayne as a veteran airline pilot who must save his plane and its stellar passengers when the engine fails on a flight from Hawaii to San Francisco. Others in the cast are Robert Stack, Claire Trevor, Jan Sterling, Laraine Day, William Campbell, Phil Harris, Robert Newton, David Brian, Paul Kelly, Sidney Blackmer, and Julie Bishop.

Archie Stout was responsible for the widescreen color cinematography of the dramatic scenes and William H. Clothier handled the aerial shots. According to Variety, The High and the Mighty earned $6 million in domestic rentals (the producers’/distributors’ share of the box office gross); in the biography John Wayne: American, authors James S. Olson and Randy Roberts state that worldwide rentals totaled $8.5 million – against a $1.46 million production budget (not including marketing and distribution expenses).

According to the Academy’s press release, the restoration of The High and the Mighty — which was shot in CinemaScope – began in 1992, “when the vault containing the negative was flooded and the entire negative soaked. Wayne’s son Michael embarked on the process of reconstructing the film and soundtrack from numerous source materials. Following Michael’s death in 2003, his widow, Gretchen, completed the restoration.”

The High and the Mighty received six Academy Award nominations: Actress in a Supporting Role (Jan Sterling and Claire Trevor), Directing (William A. Wellman), Film Editing (Ralph Dawson), Music Score of a Dramatic or Comedy Picture (Dimitri Tiomkin), and Music – Song (Tiomkin and Ned Washington). Tiomkin, who earned 22 Oscar nominations and four statuettes over the course of his career, won the film’s only Oscar.

Wayne, who was born Marion Morrison on May 26, 1907, in Winterset, Iowa, wasn’t nominated for his airline pilot. The Academy did, however, nominate him for the by-the-book 1949 war melodrama Sands of Iwo Jima, and gave him the best actor Oscar for the minor 1969 Western True Grit. Considering that Jon Voight was in the running for Midnight Cowboy, that was quite an injustice. If Academy members wanted to honor Wayne for the body of his work, they should have picked some other year. Since Wayne played the same character in just about every movie he made, it wouldn’t have made a difference.

As an aside, 1954 was an unusual year for the Academy Awards, since no less than three of the five Best Picture nominees failed to get a Best Director nod.

For his work on The High and the Mighty, William A. Wellman was one of the three filmmakers who were shortlisted even though their films failed to be included on the Best Picture roster. The other two Best Picture-less Oscar-nominated directors were Alfred Hitchcock for the crime thriller Rear Window and Billy Wilder for the romantic comedy Sabrina.

Tickets to “A Centennial Salute to John Wayne” are $5 for the general public and $3 for Academy members. Doors open at 7 p.m. Seats are unreserved. The Samuel Goldwyn Theater is located at 8949 Wilshire Boulevard in Beverly Hills. Complimentary parking is provided in the garages located at 8920 and 9025 Wilshire Boulevard. For additional information, call (310) 247-3600. 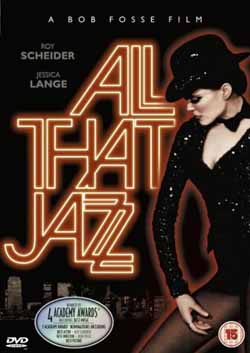 Bob Fosse’s 1979 Best Picture nominee All That Jazz will be the Academy of Motion Picture Arts and Sciences’ next film in the “Great To Be Nominated” series on Monday, May 7, at 7:30 p.m. in the Academy’s Samuel Goldwyn Theater in Beverly Hills.

In terms of content, All That Jazz was inspired by Bob Fosse’s own dancing, womanizing, and pill popping. In terms of style, it was a rip-off of (or “homage” to) Federico Fellini’s equally autobiographical – but infinitely superior – 8 1/2, quite possibly the Italian director’s most exuberant and most touching film.

Apart from an early dance number and brief sequences here and there, All That Jazz feels like one of those musicals in dire need of amphetamines – whether in liquid or pill form. Worse yet, there is a black hole where the film’s heart should have been. All in all, All That Jazz is a major letdown, especially considering that Fosse is responsible for one of the best film musicals ever made, Cabaret.

Roy Scheider (who tries really hard to bring some zest to the proceedings) stars as Joe Gideon, a workaholic, drug-addicted Broadway choreographer and director who must eventually face the fact that he won’t be around for very much longer. Jessica Lange (who was having an affair with Fosse around that time), Ann Reinking (who, two decades later, would co-direct the Broadway musical Fosse), and Leland Palmer (who had worked with Fosse in Pippin and whose character is reportedly based on Fosse’s ex-wife Gwen Verdon) are three of the women in Gideon’s life and death.

It should be noted that Bob Fosse made only one more film after All That Jazz, the disappointing Star 80, released in 1983. Four years later, Fosse died of a heart attack at age 60.

Bob Godfrey and Zlatko Grgic’s Oscar-nominated animated short Dream Doll, about a guy and his gal – who happens to be an inflatable doll – and Elaine Bass, Saul Bass (he of the funky film credits), and Laurence Starkman’s Oscar-nominated live action short The Solar Film will be screened prior to the feature.

Martin Scorsese’s 1980 Best Picture nominee Raging Bull will be screened as the next feature of the Academy of Motion Picture Arts and Sciences’ “Great To Be Nominated” series on Monday, May 14, at 7:30 p.m. at the Academy’s Samuel Goldwyn Theater in Beverly Hills.

In my view, along with Quentin Tarantino’s Pulp Fiction and Clint Eastwood’s Million Dollar Baby, Martin Scorsese’s Raging Bull is the most overrated American movie of the last 30 – or 40 or 50 – years. (I’m not quite sure how far back one must go to find so much praise bestowed upon so much artifice.) In any case, Scorsese’s overlong drama, based on Jake LaMotta’s autobiography (credited to LaMotta, Joseph Carter, and Peter Savage), revolves around the drab, mundane existence of the self-destructive middleweight boxing champion.

Despite attempts at psychological and social insights, the film barely manages to scratch the surface of LaMotta’s character and of the world in which he lived. But if Paul Schrader and Mardik Martin’s screenplay leaves much to be desired (surprisingly, it failed to get an Oscar nod) and much of the acting is as out of control as a bull running through the streets of Pamplona, Michael Chapman’s gritty black-and-white cinematography is first-rate.

Michael Mills’ Oscar-nominated animated short History of the World in Three Minutes Flat will be screened prior to the feature.

Humphrey Bogart Movies: To Have and Have Not + Key Largo

One of the greatest boxing movies ever, about a man who has turned his life around. Sorry, gotta disagree.