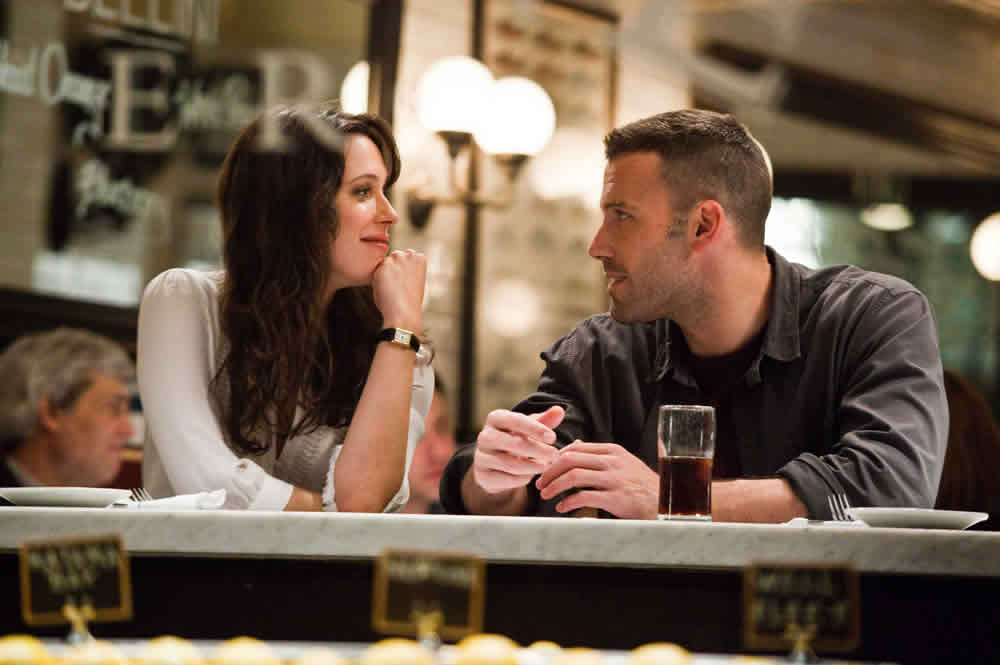 Ben Affleck thriller The Town with Affleck and Rebecca Hall.

At no. 2, the Emma Stone vehicle Easy A earned $1.05 million, remaining only marginally above the $1m-per-day mark.

At no. 3 was the Milla Jovovich-Wentworth Miller actioner Resident Evil: Afterlife with $749,000.

Sept. 20: The two big box office news this past weekend were that Ben Affleck’s heist thriller The Town performed much better than expected and that the Kristen Stewart-Robert Pattinson-Taylor Lautner romantic fantasy The Twilight Saga: Eclipse passed the $300 million milestone at the domestic box office.

Actuals are now in: The Town, which also features Jeremy Renner, Rebecca Hall, and Blake Lively, took in $23.8 million according to Box Office Mojo. That was pretty much what Warner Bros. had predicted. 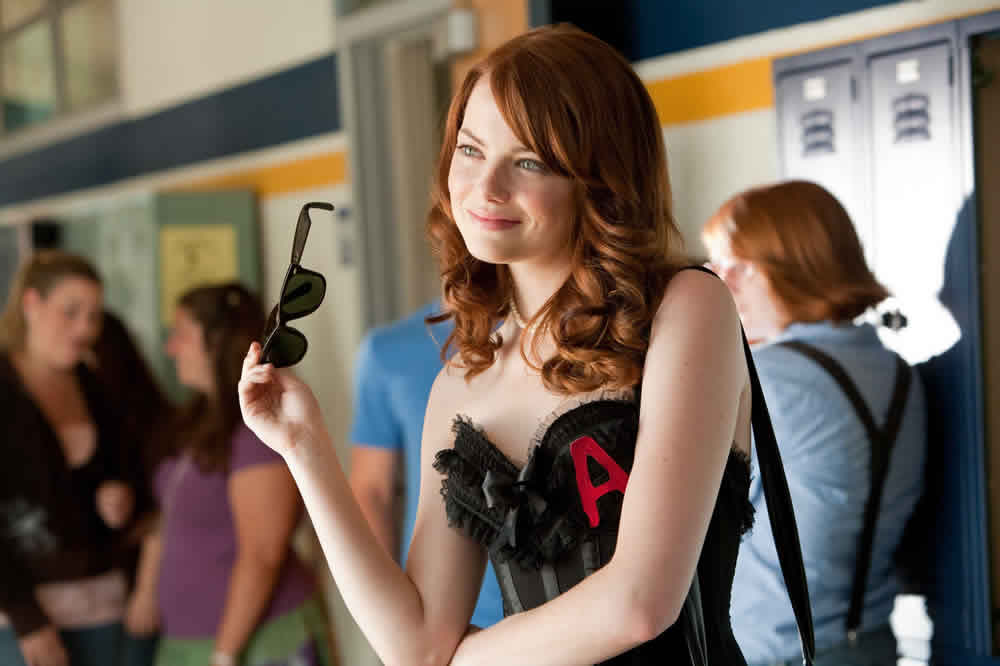 Emma Stone in Will Gluck’s Easy A

Something else worth noting: at no. 2 this past weekend was the Emma Stone vehicle Easy A with $17.7 million – that’s about $500,000 less than the studio estimates reported yesterday.

At no. 3, the M. Night Shyamalan presentation Devil collected $12.28 million. This one has been greeted by bad reviews and poor word of mouth. It’ll likely disappear fast.

At no. 4 was the Milla Jovovich-Wentworth Miller actioner Resident Evil: Afterlife with $10 million – down 62.5 percent from a week ago.

Newcomer Alpha and Omega, distributed by Lionsgate, debuted with a modest $9.1 million at no. 5.

At no. 6 was the Hayden Christensen-Paul Walker thriller Takers with $3.02 million, followed by Anton Corbijn-George Clooney’s The American with $2.67 million.

Next in line was Will Ferrell-Mark Wahlberg’s The Other Guys with $1.97 million at no. 8.

Directed by Henry Joost and Ariel Schulman, Catfish is a documentary sold as a thriller – one whose veracity has been questioned in some quarters – chronicling the unusual relationship between Schulman’s brother, Nev Schulman, and an 8-year-old girl from rural Michigan who asks via Facebook for permission to paint one of Ariel’s photographs, and the girl’s 19-year-old sister.

Directed by Mark Romanek, Never Let Me Go has received many glowing (and some not-so-glowing) reviews. Set in an alternate post-World War II England, the drama/thriller/sci-fier based on Kazuo Ishiguro’s novel stars Carey Mulligan, Andrew Garfield (that’s the new Spider-Man), and Keira Knightley. In the supporting cast: Charlotte Rampling and Sally Hawkins.

Most pundits had predicted The Town (cost: $37m) would debut in the $18m-$20 million range, but like another late-summer heist thriller, John Luessenhop’s Takers, Affleck’s second directorial feature performed way above expectations.

In fact, on its first weekend out the well-received The Town has grossed more than Affleck’s previous directorial effort, Gone Baby Gone, during its entire run in late 2007 (total: $20.3m).

Even though its $8,319 per-theater average wasn’t exactly of blockbuster caliber, The Town should be able to hold on throughout early fall if word of mouth remains as positive as most critics’ reviews. (Audiences gave the film an average A- as per CinemaScore.) Studio ads emphasizing Oscar talk for the film and for filmmaker Affleck wouldn’t hurt, either.

Now, following the unexpected success of Affleck’s film, someone somewhere (who knows better) will now be saying that The Town is proof positive that North American audiences want fresh, high-quality material at their local multiplex.

Well, sometimes they do – Christopher Nolan’s Inception, after all, topped three consecutive weekends this summer.

Just make sure you don’t look back at the weekends when Clash of the Titans, Nightmare on Elm Street, Iron Man 2, Shrek Forever After, The Karate Kid, The Expendables, and Resident Evil: Afterlife topped the charts.

Previous post: Ben Affleck’s heist thriller The Town did better than expected at the U.S. and Canada box office on Friday, taking in $8.4 million according to studio estimates.

The Emma Stone vehicle Easy A, a revamping of Nathaniel Hawthorne’s The Scarlet Letter, debuted with $6.8 million. Some pundits had expected Easy A to top the North American box office chart, but that seems unlikely now.

Sep. 19 update: The Emma Stone vehicle Easy A, a revamping of Nathaniel Hawthorne’s The Scarlet Letter, debuted with $18.2 million at 2,856 venues, averaging a passable 6,373 per theater, as per studio estimates found at Box Office Mojo. Some box office clairvoyants had foreseen Easy A (cost: $8m) topping the U.S. and Canada box office chart with anywhere between $16m-$26 million.

Whether you believe Will Gluck’s teen flick overperformed, underperformed, or performed as expected depends on whose box office “expert” you choose to follow. Either way, if Easy A‘s reported production costs are accurate, the Columbia release has recovered its budget (and some change) after a mere three days.

Another new entry, the M. Night Shyamalan presentation Devil landed in third place with $12.58 million, pretty much according to expectations.

Directed by John Erick Dowdle, Devil, which was not screened for critics and has been receiving pans online, features Geoffrey Arend, Logan Marshall-Green, Chris Messina, Bojana Novakovic, and Jenny O’Hara.

The horror flick chronicles the unhappy fate of several people, including the devil, trapped inside an elevator. It averaged a none-too-impressive $4,480 at 2,809 theaters.

At no. 4 at the North American box office this weekend was the Milla Jovovich-Wentworth Miller actioner Resident Evil: Afterlife with $10.1 million – down 62.2 percent from a week ago – according to studio estimates found at Box Office Mojo.

The independently made, Screen Gems-distributed, $60 million action/adventure/sci-fier will have trouble matching its production cost at the domestic box office. That’s not all that surprising, as the Resident Evil sequels have performed much better overseas.

As predicted, The American will end its run in the $35 million range. That’s similar to the take of previous Clooney efforts such as The Men Who Stare at Goats, Leatherheads, Good Night, and Good Luck., and Intolerable Cruelty.

Among the top twelve movies, The Town had the highest per-theater average, $8,319. The Expendables had the lowest, $755.

Taking into account only the top twelve movies, the North American box office was up 34.5 percent compared to last weekend. On the downside, it was the third lowest-grossing weekend in 2010.

Previous post: Paul W.S. Anderson’s Resident Evil: Afterlife topped the box office on Thursday, while either Ben Affleck’s The Town or Emma Stone’s Easy A (or, less likely, the M. Night Shyamalan presentation Devil) will top the box office this weekend. But the big box office news of the day, however, lies elsewhere.

First, James Cameron’s Avatar: Special Edition has finally passed the $10 million mark at the domestic box office, following Thursday grosses of $81,000. The eagerly anticipated Avatar rerelease has taken in a grand total of $10.078 million after 21 days, according to Box Office Mojo.

Despite Avatar‘s meager receipts, 20th Century Fox surely hasn’t lost any money rereleasing it. But I have no doubt that some big egos have been badly bruised.

Sept. 17 early morning: Ben Affleck’s heist thriller The Town, the M. Night Shyamalan “presentation” Devil, and the Emma Stone vehicle Easy A are the three contenders for the top spot at the North American box office this weekend.

In an Associated Press report that reads more like a promo for the upcoming movies, Paul Dergarabedian guesstimates that Easy A will be by far the top new entry.

“With clear affection for the classic [John] Hughes comedies, director Will Gluck and screenwriter Bert V. Royal deliver edgy dialogue ripped straight from the Juno playbook, along with an offbeat visual style and an endearing performance by Emma Stone — all sure to make Easy A a must assignment for the high school crowd.”

Not that other box office predictors don’t like the movie; they just believe it’ll bring in much less cash than the “around $30m” predicted by Dergarabedian. Elsewhere, Easy A is expected to gross between $12.5 million and $18 million.

In fact, a few pundits have given the weekend’s top spot to Ben Affleck’s The Town, which has received positive notices. Starring Affleck, Blake Lively, Jon Hamm, and Jeremy Renner, The Town is expected to make $16m-$18 million.

Devil, about a possessed elevator or bedeviled elevator passenger or some such (PG-13 fare), is expected to take in between $10m-$20 million. That’s quite a wide range, of course, chiefly inflated by Dergarabedian’s prediction. Devil stars Chris Messina. John Erick Dowdle directed.

Lionsgate’s animated Alpha and Omega is expected to collect around $10 million.