Christmas 2015 is just around the corner. That helps to explain Turner Classic Movies’ presentation of Fred Niblo’s Ben-Hur: A Tale of the Christ on Dec. 20, featuring Carl Davis’ magnificent score. Starring Ramon Novarro, Metro-Goldwyn-Mayer’s 1925 Ben-Hur movie version became not only the most expensive film production up to that time,[1] but also the biggest worldwide box office hit as well.[2]

Equally important, that was probably the first instance when the international market came to the rescue of a Hollywood mega-production,[3] saving not only Ben-Hur from a fate worse than getting trampled by a runaway chariot but also the newly formed MGM, which could have been financially strangled at birth had the epic based on Gen. Lew Wallace’s bestseller been a commercial bomb.

Below: ‘Ben-Hur’ movie trailer: This particular print doesn’t do justice to the 1925 film’s remarkable beauty.

Although Fred Niblo is credited as the film’s sole director, he received quite a bit of help along the way, chiefly from veteran Christy Cabanne, Alfred L. Raboch, and most notably stunt director B. Reeves Eason, whose handling of the climactic chariot race pitting Ben-Hur against his childhood friend-turned-mortal enemy Messala (Francis X. Bushman) remains one of the most exhilarating sequences ever filmed. In fact, it’s superior to the one found in MGM’s 1959 remake, directed by William Wyler and starring Charlton Heston in the title role.[4]

Besides Ramon Novarro and 1910s sex symbol Francis X. Bushman, Ben-Hur also features popular 1920s leading lady May McAvoy as the hero’s romantic interest, veteran Claire McDowell as his mother, Kathleen Key as his sister, former Universal star Carmel Myers as his temptress, and Frank Currier as his adoptive father. Betty Bronson, a star following the success of the 1924 version of Peter Pan, plays the Virgin Mary in a two-color Technicolor sequence.

Initially a Goldwyn Pictures production, Ben-Hur was to have starred George Walsh for director Charles Brabin. June Mathis, whose efforts had helped to turn Rudolph Valentino into a star following the release of Rex Ingram’s The Four Horsemen of the Apocalypse, was put in charge of the production.

Due to spiraling costs, mismanagement, and other issues, Walsh, Brabin, and Mathis were all fired not long after the formation of MGM. 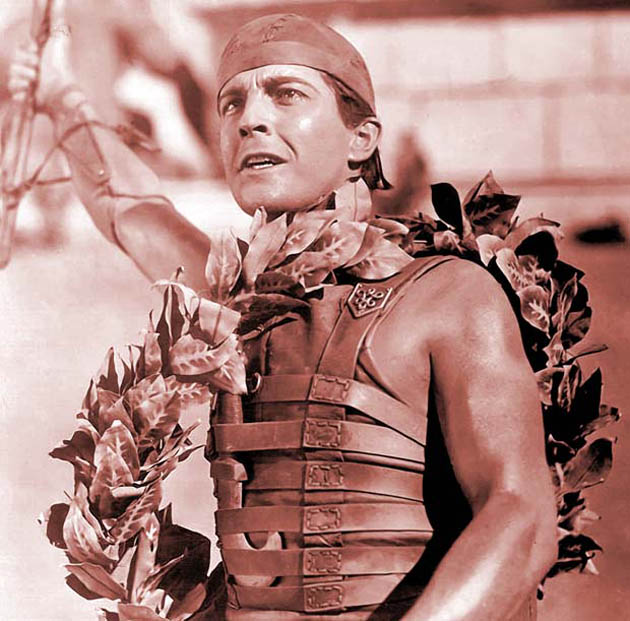 Ben-Hur movie with Ramon Novarro as the chariot race winner: One of the most exhilarating sequences ever filmed.

The text below is from my Ramon Novarro biography, Beyond Paradise:

More than three-quarters of a century after its original release, Ben-Hur remains an impressive example of grandiose filmmaking. Granted, certain backdrops are obviously painted, the sea battle is overlong and poorly edited, and the special effects are primitive when compared to today’s computer-generated product. On the other hand, the plot moves at a steady pace, while the brilliantly edited chariot race has lost none of its excitement.

More surprisingly, the quasi-religious epic remains not only thrilling, but also touching. In spite of its heavy-handed religiosity—even in the 1920s, certain reviewers thought it lacked finesse—moments of beauty, as when Ben-Hur’s leprous mother, not daring to touch him, kneels down to kiss the stone slab on which he sleeps, still retain their emotional charge. Unlike most of Cecil B. DeMille’s religious epics, Ben-Hur does not spend much time on assorted orgies and temptations of the flesh—though modern audiences are surprised to find male nudity and bare female breasts in a 1925 picture. The non-exploitative and reverential tone of the film surely appealed to its star.

“A less experienced actor would have been swayed by his emotions,” remarked Louella Parsons about the picture’s leading man, “but Mr. Novarro exercises an admirable restraint.” Although “restraint” is hardly the word to describe Novarro’s showy, charismatic, and grandiloquent performance, the praise he received from Louella and other reviewers is perfectly understandable. Those qualities passed for great acting then – and, with certain concessions to modern tastes, still do – and could well have won him an Academy Award had the Academy of Motion Picture Arts and Sciences existed.

But there is more to Novarro’s portrayal than mere glitz. Underneath the histrionics lie charm and honesty, attributes that a director with a finer touch, such as Rex Ingram or King Vidor, would have relied on for a more nuanced performance. Still, Novarro does shine in several key moments, whether expressing a mixture of anger, triumph, and pain after the climactic chariot race, or looking majestic in two-strip Technicolor while feted in the streets of Rome as “the greatest athlete of his day.”

With the possible exception of 20th Century Fox’s 1963 Cleopatra, no other motion picture has had as tortuous a history as MGM’s 1925 epic. However, unlike Fox’s historical pageant, Ben-Hur ultimately turned into a remarkable triumph for all involved. With Ben-Hur, The Big Parade, and The Merry Widow, the newly formed MGM consolidated its status as a major Hollywood powerhouse. Fred Niblo followed the gigantic epic with high-profile vehicles for Greta Garbo, Lillian Gish, and Norma Talmadge (he never worked with Novarro again).

Francis X. Bushman had a brief resurgence in popularity and might have gone further had he not antagonized Mayer with his threat to quit Ben-Hur in mid-production. Despite her negative reviews, May McAvoy went on to play leads in several important films, including the historical milestone The Jazz Singer.

But no one realized more professional recognition from the Ben-Hur experience than did the picture’s star. In fact, Novarro became so closely associated with the part of this most un-Latin Lover of roles that for years afterward he received fan mail addressed to “Mr. Ben-Hur.”

Ben-Hur movie with Francis X. Bushman as the villainous Messala: Blood and sand on the chariot race arena.

MGM and Paramount Pictures’ 2016 Ben-Hur movie version, which was to have opened on Feb. 26 in North America, has been rescheduled to Aug. 12. Jack Huston (filmmaker John Huston’s grandson) stars in the title role, under the direction of Timur Bekmambetov.

The 2016 Ben-Hur movie version has reportedly cost nearly $100 million, not including marketing and distribution expenses that could raise its total price tag to somewhere around $150 million.

Below is a brief list of other Ben-Hur movie and/or Ramon Novarro articles found at Alt Film Guide:

[1] With a final budget – not including marketing and distribution costs – totaling an unheard of $3.97 million (approx. $54 million today), Ben-Hur would remain the costliest movie ever until Victor Fleming’s Gone with the Wind, another MGM release, 14 years later. Clark Gable, Vivien Leigh, Leslie Howard, and Olivia de Havilland starred for producer David O. Selznick.

To the best of my knowledge, there is no official documentation about the budget of D.W. Griffith’s multi-part 1916 epic Intolerance. Estimates hover around the $2-2.5 million range, with nearly $400,000 coming out of Griffith’s own pocket.

Despite the commercial success of two other 1925 releases, King Vidor’s The Big Parade and Erich von Stroheim’s The Merry Widow, the newly formed MGM might quite possibly have gone the way of Intolerance‘s production company, the Triangle Film Corporation (formed in 1915; shut down in 1919), had its Ben-Hur movie adaptation been a box office bomb.

According to film historian David Pierce, Howard Hughes’ Hell’s Angels (1930), featuring Ben Lyon, James Hall, and Jean Harlow (replacing the originally cast Greta Nissen), cost $2.85 million. Its budget, however, has been inflated to close to $4 million – just high enough for Hughes’ aviation epic to be labeled the most expensive movie up to that time. 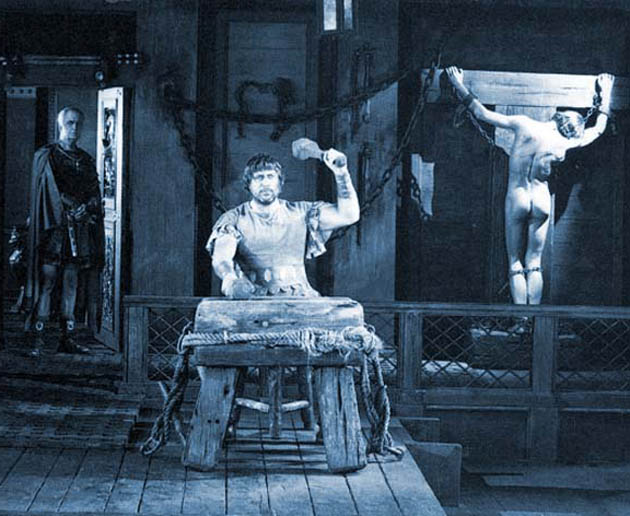 [2] With worldwide rentals reaching $10.73 million (approx. $300 million today;* including the 1931 reissue with sound effects), Ben-Hur also became the biggest worldwide box office hit ever. It would remain no. 1 until Gone with the Wind.

Note: In North America, King Vidor’s World War I drama The Big Parade, toplining John Gilbert and Renée Adorée, was an even bigger hit than Ben-Hur on their respective initial releases: $4.99 million vs. $4.35 million. Internationally, The Big Parade collected $1.14 million vs. Ben-Hur‘s $5.02 million.

Also, it’s unclear what Ben-Hur‘s worldwide box office gross actually was. As a rule of thumb, these days studios keep approximately 50-55 percent of the domestic gross of a film, and 40 percent of its international gross.

Following these percentages, MGM’s 1925 Ben-Hur movie version would have grossed approximately $20 million worldwide, or about $550 million in 2015 dollars – number 45 on the inflation-adjusted domestic chart, smack between George Seaton’s Airport and George Lucas’ American Graffiti, and ahead of Tim Burton’s 1989 Batman, Peter Jackson’s The Lord of the Rings: The Return of the King, Mel Gibson’s The Passion of the Christ, and George Lucas’ Star Wars: Episode III – Revenge of the Sith.

Having said that, one must remember that back then, both on the domestic front and in a number of international territories, there was no division between the exhibitor and the production/distribution sides of motion pictures as far as major studios such as Metro-Goldwyn-Mayer were concerned. MGM, in fact, was owned by “its” theaters – Loew’s, Inc. To date, I haven’t seen reliable information about how Loew’s/MGM split the box office grosses of their films.

Hollywood Hooray for the international market

[3] The international market has always been important for American studios; for instance, Ramon Novarro and Greta Garbo were two MGM stars whose movies not infrequently made more money overseas than in North America.*

In recent years, the international market has become crucial for the financial well being of Hollywood studios, having surpassed the domestic market (U.S./Canada). Relatively recent examples of movies, mostly actioners with plenty of special effects, saved – or greatly assisted – by international moviegoers include:

I should add to this brief list the recently released Star Wars: The Force Awakens. J.J. Abrams’ futuristic adventure movie featuring Daisy Ridley, Oscar Isaac, and Adam Driver, took in an estimated $517 million worldwide in its first four days out – 54 percent from international territories, with powerhouse China yet to join the list.

* Ernst Lubitsch’s The Student Prince in Old Heidelberg was another costly Novarro vehicle – costarring Norma Shearer – that performed well internationally, even though the romantic drama ultimately ended up in the red.

[4] However exhilarating the chariot race, the accident that resulted in the deaths of several horses is unjustifiable. It can be briefly seen on screen, when one chariot crashes onto another.

Among the other cast members in the remake were Best Supporting Actor Oscar winner Hugh Griffith, Martha Scott (Best Actress Oscar nominee for Our Town, 1940), Haya Harareet, and Jack Hawkins.

A previously posted clip from Kevin Brownlow and David Gill’s 1980 television miniseries Hollywood, is no longer available. Narrated by James Mason, the clip features an extensive discussion on the making of MGM’s problem-plagued 1925 Ben-Hur movie adaptation.