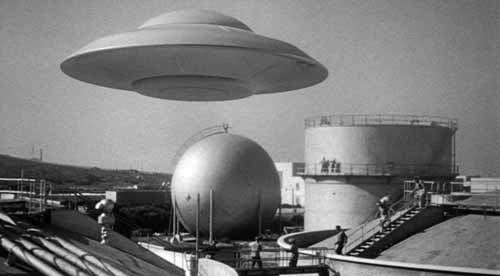 Earth vs. the Flying Saucers.

Bernard Gordon, a blacklisted screenwriter during the McCarthy era and a leader of the protest against the honorary Oscar awarded director (and informant) Elia Kazan, died on May 11 at his home in the Hollywood Hills. He was 88.

Gordon was born on Oct. 29, 1918, in New Britain, Conn., to a hardware store owner and his wife, both Russian-Jewish immigrants. He grew up in New York City, where he studied English and film at City College of New York, earning a bachelor’s degree in 1937. At that time, he and a childhood friend, Julian Zimet, established a film-appreciation group called the Film and Sprocket Society.

Upon arriving in Los Angeles around 1940, Gordon got a job as a script reader for Paramount. (Zimet would also land in Hollywood. Before being himself blacklisted, he wrote for several films, including the Roy Rogers vehicle Heldorado and the original story for the 1948 Alan Ladd-Veronica Lake drama Saigon.)

According to Patrick McGilligan and Paul Buhle’s Tender Comrades, a 1997 book about the Hollywood blacklist, Gordon became active in the Screen Readers Guild, serving as its president and helping to negotiate the organization’s first contract with the film studios. He also joined the Communist Party. (According to his daughter, he eventually quit the party after learning of Stalin’s crimes.)

The decision to become a Communist Party member “was certainly not a path to success,” Gordon would write in his memoirs. “Right or wrong, people were there because they were outraged about the existing woes and evils of the world and wanted to do something to correct them.”

Declared physically unfit for the military, Gordon spent World War II working in the film industry. After the war, he reportedly earned a living as a freelance scenarist, and later landed screenwriting assignments for Universal.

In 1952, Gordon received sole screenplay credit (from a story by William Alland) for the boxing drama Flesh and Fury, starring Tony Curtis (above) as a deaf boxer, Jan Sterling as her usual ruthless blonde, and Mona Freeman as her usual nice girl. Joseph Pevney directed.

Gordon, however, would have only two more Hollywood credits under his own name – the Rock Hudson Western The Lawless Breed (1953) and, at Warner Bros., the film noir Crime Wave (1954), starring Sterling Hayden – before his career came to a halt.

He had been subpoenaed to testify before the House Un-American Activities Committee, then investigating alleged Communist infiltration in Hollywood. He never testified, but was blacklisted all the same after being labeled a Communist by someone else.

Initially, Gordon tried to make ends meet – working for $50 a week – by becoming “the world’s worst plastics salesman” for a company in downtown Los Angeles that made plastic covers for mattresses and toasters. Once he resumed his screenwriting career in the mid-to-late 1950s, Gordon adopted his boss’ name, Raymond T. Marcus, as an alias for several screenplays.

Most of the films he wrote during that period were B (sometimes Z) fare, directed by minor names and starring third-tier performers, among them Earth vs. the Flying Saucers (1956, above), with Hugh Marlowe and Joan Taylor; Zombies of Mora Tau (1957), with Gregg Palmer and Allison Hayes; Hellcats of the Navy (1957), with Ronald Reagan and Nancy Davis; and Escape from San Quentin (1957), with Johnny Desmond and Merry Anders.

The best known of the lot is probably the 1957 film noir-cum-melodrama Chicago Confidential, directed by Sidney Salkow. The film starred Dick Foran as an union official framed for murder. Brian Keith was the D.A. who tries to crack the case, while Beverly Garland played the girl.

Through a friend, Gordon met screenwriter-producer Philip Yordan, who acted as a front for blacklisted writers. According to the Los Angeles Times obit, Gordon moved to France and then Spain to work for Yordan from 1960 to 1973. Yordan usually received credit for the scripts, while Gordon was paid $2,000 a week for his efforts.

“It’s ironic but true, because when I escaped and went to Europe, I finally became a success,” Gordon remarked in a Los Angeles Times 2000 article.

(The Times obit, however, doesn’t explain why Gordon needed an alias throughout the 1960s – though he used his own name in a few films – long after the blacklist had ceased to exist. Dalton Trumbo, one of the Hollywood Ten, was receiving credit under his own name as early as 1960.)

Life in Europe may have been satisfying, but Gordon’s European output was a mixed bag.

The science-fiction B horror thriller The Day of the Triffids (1962), starring a faded Howard Keel, plus Nicole Maurey and Janette Scott, has become a cult classic, while El Cid (numerous sources credit Gordon as writer or co-writer), was a mammoth 1961 historical epic about the Spanish Reconquista. Starring a ridiculously miscast Charlton Heston in the title role and Sophia Loren as the woman he loves, this sumptuous – albeit more than a little stilted – production (directed by Anthony Mann) received some good notices and was a solid box office success.

On the downside, Nicholas Ray’s bloated historical drama 55 Days at Peking, once again with a badly miscast Charlton Heston, in addition to David Niven and Ava Gardner, didn’t fare all that well, while Circus World (1964) was a John Wayne mediocrity made (barely) watchable by Rita Hayworth’s excellent performance in a supporting role.

During that period, Gordon also adapted The Thin Red Line (1964), from James Jones’ war novel. The story would be fully revamped by director Terrence Malick for his significantly more prestigious 1998 Academy Award-nominated adaptation. Gordon’s version was directed by Andrew Marton and starred a pre-2001 Keir Dullea.

Gordon’s last film credit was as a screenwriter in the little-seen Surfacing, a 1981 adaptation of a Margaret Atwood novel about a young woman who goes into the wilderness looking for her missing father. Directed by Claude Jutra (Quebec’s Prix Jutra is named after him), Surfacing starred Joseph Bottoms and Kathleen Beller.

In the 1980s, the Writers Guild of America began to publicly acknowledge the achievements of blacklisted screenwriters. Bernard Gordon’s name was restored to the credits of about a dozen films, but for him that was too little too late.

“The action by the guild comes about 40 years too late to help my Hollywood career,” Gordon told the New York Times in 1997. “I sure am angry at the way I was treated by all the major studios. They blacklisted me, and I couldn’t get any work in this damn town.”

Two years later, when Elia Kazan stepped onstage at the Dorothy Chandler Pavilion to accept an honorary Academy Award, many in the audience – including Nick Nolte, Ed Harris, and Amy Madigan – didn’t applaud. Outside, hundreds of demonstrators protested Kazan’s Academy recognition. Gordon had been one of the leaders of the anti-Kazan movement.

In 1952, Kazan had named names before the House Un-American Activities Committee. Two years later, he made On the Waterfront, from a screenplay by Budd Schulberg – who’d also informed on his colleagues – in which Marlon Brando’s informant is hailed as a hero. The film went on to win eight Academy Awards, including best picture, best director, and best original screenplay. Kazan, for his part, remained unrepentant.

“In the era of Linda Tripp [of the U.S. president Bill Clinton/White House intern Monica Lewinsky brouhaha] some appear more willing to understand Kazan’s conduct, though others who were affected by Kazan’s disclosures are not so forgiving,” wrote Cliff Rothman in The Nation.

“Some very, very prominent people had been affected by the depths of that campaign against Kazan. That was Bernie Gordon’s handiwork, and he lived long enough to experience some vindication,” said Patrick McGilligan.

“He helped to support an oppressive regime that did incalculable damage to America and abroad,” Gordon wrote in the Los Angeles Times.

In addition to screenplays and articles, Gordon also wrote two books: Hollywood Exile, or How I Learned to Love the Blacklist (1999) and The Gordon File: A Screenwriter Recalls Twenty Years of FBI Surveillance (2004), which was based on his 300-page FBI file.

He married Jean Lewin, a fellow activist who ran the Hollywood Canteen, in 1946. She died in 1995.

“He was bitterly funny and extremely modest about his screenwriting career,” McGilligan told the Los Angeles Times. “He knew the blacklist had kept him from doing great things. … He could be very funny on the subject, but he never forgave his enemies.”