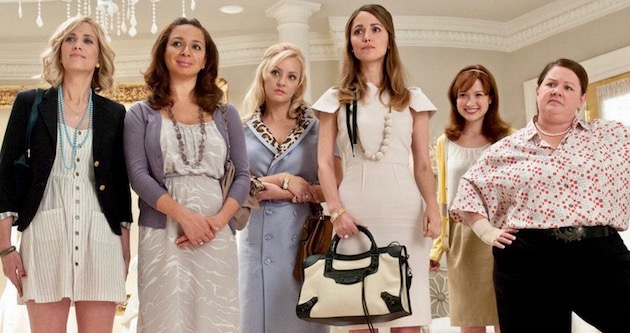 Two 2011 box office hits in the United States – The Help and Bridesmaids – topped the Best Cast (or “Best Ensemble Cast”) category of, respectively, the National Board of Review and the Washington D.C. Area Film Critics Association.

Curiously, the only Best Cast (co-)winner to top any of the National Board of Review’s and Washington Film Critics’ individual acting categories was The Help actress Octavia Spencer.

And ironically, Spencer was chosen Best Supporting Actress by the Washington Film Critics, whose Best Cast selection was, as mentioned above, Bridesmaids.

Besides their Best Cast similarities/divergences, the National Board of Review and the Washington D.C. Film Critics also went their own similar/separate ways in the Best Film category.

The Washington Film Critics, for their part, selected Michel Hazanavicius’ French-Belgian-made, Hollywood-set The Artist, an homage to the silent era.

The (nearly 100%) dialogue-less, black-and-white comedy-drama stars Jean Dujardin as a cross between silent screen icons John Gilbert and Douglas Fairbanks – an exuberant movie star whose career goes fast downhill at the dawn of the sound era, right when a former unknown (Bérénice Bejo) rises to the very top.

Snubbed in the Best Cast category this time around, both Hugo and The Artist are potential Best Cast SAG Award contenders.

John Logan (Gladiator, The Aviator) was credited for the Hugo screenplay, based on Brian Selznick’s novel The Invention of Hugo Cabret. Inspired by A Star Is Born, Singin’ in the Rain, and other Hollywood classics, Michel Hazanavicius penned The Artist.

Best Cast and Best Film commonalities aside, the National Board of Review and the Washington Film Critics had several exact matches among their winners: Best Director (Martin Scorsese for Hugo), Best Actor (George Clooney for The Descendants), Best Animated Feature (Gore Verbinski’s Rango), and Best Screenplay (original: Will Reiser for 50/50; adaptation: Nat Faxon, Alexander Payne, and Jim Rash for The Descendants).

Additionally, while the National Board of Review’s Best Foreign Language Film was Asghar Farhadi’s Iranian drama A Separation, already considered the top Academy Award contender in that category, the Washington D.C. Film Critics voted for Pedro Almodóvar’s unusually dark Spanish drama The Skin I Live In, starring Antonio Banderas as a mad surgeon and Elena Anaya as his victim.

Hugo with veteran Christopher Lee (The Mummy, The Wicker Man). Martin Scorsese’s big-budget 3D fantasy adventure revolving around the development of cinema has been both a U.S. critics favorite and a box office dud. Hugo has also turned out to be The National Board of Review’s Best Film of 2011. The Washington D.C. Film Critics, however, have opted for another nostalgic look at cinema’s past: Michel Hazanavicius’ French-Belgian The Artist, an homage to the silent era. Neither film topped the Best Cast category of either group, but both are strong possibilities for the Best Cast SAG Award.

National Board of Review winners

Top 10 Films (in alphabetical order)
The Artist.
The Descendants.
Drive.
The Girl with the Dragon Tattoo.
Harry Potter and the Deathly Hallows: Part 2.
The Ides of March.
J. Edgar.
The Tree of Life.
War Horse.

Special Filmmaking Achievement Award: The Harry Potter franchise, for a distinguished translation from Book to Film.

Best Documentary
Being Elmo: A Puppeteer’s Journey.
Buck.
* Cave of Forgotten Dreams.
Into the Abyss: A Tale of Death, A Tale of Life.
Project Nim.