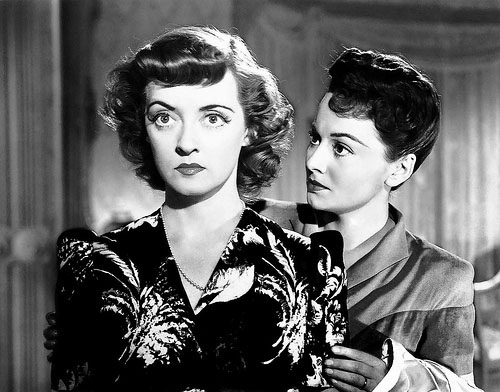 Bette Davis and Olivia de Havilland in In This Our Life.

That’s too bad, as TCM now has access to Columbia’s film library. They could have unearthed Davis’ early Columbia crime drama The Menace (1931), which isn’t very good, but it’s rare and it’s Bette Davis. Also, there’s the little-seen, Columbia-distributed, political drama Storm Center (1956), in which Davis co-stars with Kim Hunter, who happened to be blacklisted during the anti-Red hysteria of the 1950s. Well, maybe later in the year…

I can’t say I’m a huge Bette Davis fan, but I do like watching her. In fact, I find several of her performances to be among the best ever committed to film. One of my favorites is her cool murderess in The Letter, which will be shown on Davis Day. Written by Howard Koch (from W. Somerset Maugham’s play), directed by William Wyler, shot by Tony Gaudio, edited by Warren Low, and scored by Max Steiner, The Letter is the type of glossy, classy, adult, intelligent film that – despite its moralistic ending – gives the studio era a good name.

Davis is superb as the plantation wife who, in a jealous fit, shoots her lover 200 times. And then claims it was all his fault. The rest of the cast, including Herbert Marshall as her husband, James Stephenson as her attorney, and Gale Sondergaard as her match, is simply flawless. A must for those who haven’t seen it, yet. (And hopefully, one day TCM will show the 1929 The Letter – which sucks miserably, but it’s super rare, and it stars stage legend Jeanne Eagels in one of her few screen roles. In other words, it’s another must-see.)

The other Bette Davis vehicles are a mixed bag.

Marked Woman is basically a moralistic, B crime flick; my sympathies were all with the criminals. Deception (a remake of another Jeanne Eagels’ vehicle, Jealousy) and Watch on the Rhine boast the class and gloss typical of the old Warner Bros., but even though both are “adult entertainment” and quite watchable (Claude Rains is masterful in Deception), they lack the depth and complexity found in The Letter.

I saw a staging of The Man Who Came to Dinner several years ago and found it a delight. The film version, however, always leaves me cold, chiefly, I guess, because I find Monty Woolley – no matter the role – hard to watch (and just as hard to listen to). True enough, his character in The Man Who Came to Dinner is supposed to be an effete jerk (based on Alexander Woollcott), but I don’t think that while watching the movie I should have been praying for Richard Widmark’s Kiss of Death psycho killer to show up on screen to push the wheelchair-bound Woolley down the stairs.

Another problem with the William Keighley-directed film is that Davis is quite ineffectual as the straight woman; on the other hand, Reginald Gardiner (above, with Davis and Woolley), Ann Sheridan, Mary Wickes, Billie Burke, and a pert penguin are all quite enjoyable. Too bad that George Cukor or Ernst Lubitsch didn’t direct this one. They could have done wonders with the material. And who knows, they might even have made Woolley tolerable.

Dark Victory and Now, Voyager are for hardcore fans of both Bette Davis and melodrama. Neither one does much for me, though, admittedly, both are great to look at. In This Our Life (above, with Olivia de Havilland) would have been on that same level, except that director John Huston and screenwriter Howard Koch (adapting Ellen Glasgow’s novel) allow the melodrama to run amok in all its glorious luridness. What you get then is something that’s so over the top it’s as riveting as a train wreck. Another reason to recommend In This Our Life: it is one of those rare Hollywood films made before the end of World War II in which black actors play characters, not caricatures.

Pocketful of Miracles, Frank Capra’s remake of his own Lady for a Day, is a great example of why most movies should never be remade. During the shoot, Davis reportedly had problems with co-star Glenn Ford (replacing Frank Sinatra), then doting on his young and beautiful protegee Hope Lange. And so did Capra, who later blamed Ford for the film’s woes. (According to Capra biographer Joseph McBride, that wasn’t quite fair on the director’s part. McBride adds that Davis “hated” the role of Apple Annie, but did it for the money, $100,000, after Shirley Booth, Jean Arthur, Helen Hayes, and Katharine Hepburn turned the part down.)

3:00 AM Bette Davis: The Benevolent Volcano (1984)
A documentary depicting the life and career of one of America’s premiere actresses. Director: George Marshall. Color. 60 min.

5:00 PM Man Who Came To Dinner, The (1942)
An acerbic critic wreaks havoc when a hip injury forces him to move in with a midwestern family. Cast: Bette Davis, Ann Sheridan, Monty Woolley. Director: William Keighley. Black and white. 113 min.

9:00 PM The Letter (1940)
A woman claims to have killed in self-defense, until a blackmailer turns up with incriminating evidence. Cast: Bette Davis, Herbert Marshall, James Stephenson. Director: William Wyler. Black and white. 95 min.

11:00 PM In This Our Life (1942)
A neurotic southerner steals her sister’s husband then vies with her for another man. Cast: Bette Davis, Olivia de Havilland, George Brent. Director: John Huston. Black and white. 97 min.

I’ve watched ten Bette Davis movies recently; like them or not, each minute of all her performances had presence, meaning and range. She had stage-trained skills galore, a quirky semi-beauty all her own, a superb voice and more.

Like so many things in life, favourite stars are often question of taste. For me, Bette Davis truly defines STAR POWER.

You shouldn’t, you shouldn’t! Qvoid it like the plague (or chase it desperatly, it will vindicate you not being a Bette Davis fan…)

Well, if that’ll vindicate my non-fanship, then I really should check it out.
Perhaps then Danny will allow me to keep my inexistent credentials.

NOT a Bette Davis fan? Give back your credentials, Andre!

I fully share your enthusiasm for “The Letter”, although I admit to thoroughly enjoying Ms. Davis’ films.

Still, I agree there’s nothing very appealing in the set (perhaps the documentaries?), other than the always enjoyable “Now, Voyager” (with the lighting of the cigarettes and the “let’s not ask for the moon, we have the stars” unthinkable line) and the “Dark Victory” unlikely glory of 1939. Re: “A Pocketful of Miracles”, I rather thought everyone’s acquitted themselves nicely. Perhaps my memory betrays me.

Very generous of you not to comment on “Return to Witch Mountain”, a terrible, terrible piece to watch, with no redeaming features whatsoever.