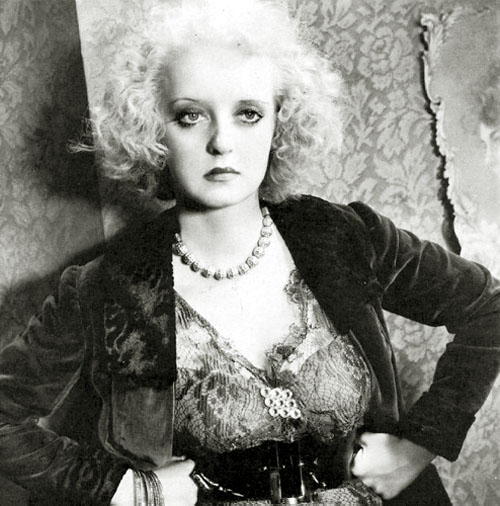 Bette Davis vs. Oscars: Davis received widespread praise but no Academy Award nomination for her work in John Cromwell’s Of Human Bondage. The outrage was such that the Academy changed voting rules.

Steven Spielberg, Barbra Streisand, Leonardo DiCaprio, Audrey Hepburn, Gordon Willis, Christopher Nolan The Director, and James Cameron The Screenwriter have all faced major Oscar “snubs,” but those have been nothing compared to what took place in early 1935. Even if James Cameron The Director had been snubbed for the blockbuster Avatar a few weeks ago, that would still not be ranked as the #1 Oscar Snub ever.

Why not? Well, simply because Academy rules wouldn’t have been drastically altered to allow last-minute write-in ballots to select the year’s Oscar winners just to appease Avatar fans. But that’s exactly what happened back in February 1935 following the furor sparked by the omission of Bette Davis from the 1934 roster of Best Actress Academy Award nominees.

Davis was a shoo-in for a nomination following her take-no-prisoners, star-making turn as a vicious Cockney waitress named Mildred Rogers, who makes life miserable for clubfooted medical student Leslie Howard in John Cromwell’s film adaptation of W. Somerset Maugham’s Of Human Bondage. If that weren’t all, Davis’ character comes down with tuberculosis, but still fails to find redemption. As the film progresses, the glamorous star of Fashions of 1934 and Ex-Lady gets uglier and uglier: her hair becomes increasingly disheveled, she develops dark circles under eyes, her pasty face looks about ready to sink into itself.

Critics were impressed. Life magazine, for one, asserted that Davis had given “probably the best performance ever recorded on the screen by a U.S. actress,” while the Time reviewer wrote that “Bette Davis, in the first part she has ever had which has required more than handsome clothes and an enigmatic expression, makes Mildred almost as unpleasant to see as she was to imagine.” And following effusive praise for Leslie Howard, the New York Times’ Mordaunt Hall remarked on Davis’ “enormously effective portrayal.”

In her 1962 autobiography The Lonely Life, the actress set modesty aside to call herself “the female Marlon Brando of my generation” for her fearless portrayal of the unrepentant wench.

Considering the sort of acclaim she received in 1934, how could Davis not have been nominated?

Fewer Best Actress slots – only three that year – and a mix of studio and Academy politics is the probable answer.

Bette Davis was a Warner Bros. contract star. Jack Warner didn’t want her to play Of Human Bondage‘s Mildred at rival studio RKO. Compounding matters, the film lost money (about $45k then, or $750,000 today). RKO wouldn’t push Davis, a non-contractee in a movie that did poorly at the box office, while Warners wouldn’t push Davis for a film made elsewhere that they felt the actress shouldn’t have starred in to begin with.

Worse yet, the seven-year-old Academy was then at odds with the various burgeoning Guilds. Actors had been resigning en masse from the big-studio dominated Academy ranks in order to join the Screen Actors Guild. Only 95 of them were left to vote for the 1934 nominations.

The votes – at that time, the preferential system hadn’t been established, yet – went to first-timer Claudette Colbert, a Paramount contract player who became a top star following the unexpected success of the Columbia-made comedy It Happened One Night; Metropolitan star Grace Moore, another Academy Award first-timer in another unexpected hit, the Columbia musical One Night of Love; and MGM’s First Lady of the Screen and three-time nominee Norma Shearer (and wife of the studio’s former second-in-command Irving G. Thalberg) for the period melodrama The Barretts of Wimpole Street.

The outrage over Davis’ omission was such, however, that the Academy had to reconsider.

“The Academy is dwindling in importance, especially in Hollywood,” commented the Hollywood Citizen-News, “and its current nominations have done much to harm it. Everyone in the profession is expressing amazement that Bette Davis is not even mentioned.”

Demands for write-in votes began pouring in. Even nominee Norma Shearer expressed her support for giving Davis a chance. (The Thin Man‘s Myrna Loy also had her champions.) Nine days after the announcement of the nominations, Academy President Howard Eastabrook issued the following statement:

Criticisms of the nominations for the 1934 Academy Awards have appeared with such uniform content that they raise the question as to whether these criticisms are based on genuine opinion or propaganda. With so many achievements of unquestioned merit each year, however, it is inevitable that certain differences of opinion should arise.

Despite the fact that the criticism fails to take into consideration that the nominations have been made by the unrestricted votes of each branch, the awards committee has decided upon a change in the rules to permit unrestricted selection of any voter, who may write on the ballot his or her personal choice for the winners.

“The air was thick with rumors,” Bette Davis later recalled in her memoirs. “It seemed inevitable that I would receive the coveted award. The press, the public and the members of the Academy who did the voting were sure I would win! Surer than I!”

According to Mason Wiley and Damien Bona’s Inside Oscar, when Bette Davis announced she would be present at the awards ceremony on Feb. 27, 1935, official Best Actress nominees Claudette Colbert, Grace Moore, and Norma Shearer decided they wouldn’t.

They needn’t have worried. Possibly because many votes had already been sent in by the time of Howard Eastabrook’s announcement, or perhaps because of other vote-tallying issues – whether intentional or unintentional – regarding the write-in ballots, Claudette Colbert turned out to be year’s Best Actress. Davis later claimed that the powers-that-be at Warners had specifically asked their employees not to vote for her. But Warner Bros. conspiracy or no, there were no write-in winners that year.

When the Academy announced the order of votes – that was normal procedure in those days – it was revealed that Colbert was followed by official nominees Shearer and Moore. Years later, however, Academy records revealed that the announcement had been false. Bette Davis had come in third. “Not since that decision in 1934 was so cavalier a verdict allowed to take place,” Davis wrote in her autobiography.

Possibly because of the Bette Davis Oscar Outrage – Davis affirms it was so in her book, but I haven’t found confirmation for it – in 1935 Price Waterhouse & Co. was contracted to tally the Oscar ballots, something they’ve been doing ever since. (Previously, the Academy’s staff and judges had done the vote tabulation.)

The Academy would allow write-in votes the following year as well, and that’s how non-nominee Hal Mohr won the Best Cinematography Award for A Midsummer’s Night Dream. Bette Davis, an official nominee that year, took home the Best Actress Oscar for the minor melodrama Dangerous – a consolation prize if there ever was one. More deservedly, she would win a second Oscar three years later for Jezebel. Eight more nominations would follow in the next quarter century.

“I was heartbroken not to win my first Academy Award for Of Human Bondage,” Davis wrote in Mother Goddam. “Not that I honestly have approved of my performance as Mildred, as I have upon only very few occasions approved of other performances. But due to the reviews and the acclaim given me by friends in my profession I just took it for granted I would win. One must never take anything for granted – especially Academy Awards. I made the same mistake three more times. Shame on me – never will again.”

Chief sources: Inside Oscar by Mason Wiley and Damien Bona; 70 years of the Oscar: the official history of the Academy Awards by Robert Osborne; Mother Goddam by Whitney Stine and Bette Davis; The Lonely Life: An Autobiography by Bette Davis.

As much as I have always admired Bette Davis, Claudette Colbert was the more deserving winner that year. And furthermore, Davis did not deserve to win for her performance in ‘Dangerous’ the following year either.

Bette Davis was the quintessential actress of not only her generation but of the 20th century. She was most assuredly robbed of her first Oscar for Of Human Bondage and then again some almost 20 years later in All About Eve. That would have made 2 more Oscars right there and quite possible she could have won for Baby Jane which would have tied her with Katherine Hepburn. I guess now we’ll never know what might have been. The futility of “hindsight”!