Andre Soares 14 years ago
Bette Davis – young and older – is the subject of a Los Angeles County Museum of Art and Academy of Motion Picture Arts and Sciences centennial tribute.

Bette Davis young & later years: From ‘Jezebel’ to ‘The Nanny’

Celebrating Bette Davis’ centennial, the Film Department of the Los Angeles County Museum of Art (website) is presenting the series “Fasten Your Seat Belts: The Essential Bette Davis,” which began on May 1, with the unveiling of a new US Postal Service stamp in the presence of Turner Classic Movies host Robert Osborne and Davis’ personal assistant Kathryn Sermak. (Author Allan Ellenberger was there last night. He writes about the evening on his blog.)

“Fasten Your Seat Belts” will screen some of Bette Davis’ best-known films. (There are no rarities in the series.)

Addendum: Actually, there is a major rarity in the series. The 1951 melodrama Payment on Demand, in which Davis plays a middle-aged woman who discovers that life as a divorcee is no fun. Barry Sullivan co-stars. (Also, see comments at the bottom of this article.)

Among the upcoming Davis’ vehicles that shouldn’t be missed are (for dates, see screening schedule below):

All About Eve (1950) – Davis does a great Tallulah Bankhead impersonation in screenwriter-director Joseph L. Mankiewicz’s literate (perhaps a bit too literate) and jaded look into New York City’s theater world. All About Eve was nominated for 14 Oscars – a record shared with Titanic – winning 6, including best film, director, screenplay, and supporting actor (George Sanders). Curiously, one of Davis’ trademark roles was actually first offered to Claudette Colbert (who had to be replaced after breaking her back).

Mr. Skeffington (1944) – Not one of Davis’ best-remembered films, but one of her best nevertheless. Claude Rains, excellent as always, has the title role. Davis plays his vain wife who discovers later in life that beauty isn’t all. For once, the actress is fully convincing as a sensual, attractive woman.

The Letter (1940) – One of Davis’ best films – and one of the best films made during the studio era, period. William Wyler directed this tale of lies, revenge, murder, and more lies, in which a jealous woman kills her lover and then pretends to be an innocent victim to her husband and the Law. Fellow players Herbert Marshall, James Stephenson, and Gale Sondergaard are all superb.

Beyond the Forest (1949) – In the film version of Edward Albee’s Who’s Afraid of Virginia Woolf?, Elizabeth Taylor’s character keep trying to remember the name of the film in which Bette Davis exclaims, “What a dump!” The film in question is the King Vidor-directed melodrama Beyond the Forest, which makes Vidor’s overwrought melo-Western Duel in the Sun look subdued. Massacred by critics and ignored by the public, Beyond the Forest abruptly ended Davis’ association with Warner Bros. If it weren’t for Claudette Colbert’s broken back, Davis’ career might never have recovered from that fiasco. Yet Beyond the Forest is infinitely more enjoyable than well-regarded Davis fare like Dark Victory and Now Voyager. Davis herself had no interest in doing the film, telling biographer/interviewer Whitney Stine (I’d Love to Kiss You: Conversations with Bette Davis), “The picture would have worked beautifully if they had cast Virginia Mayo and Steve Cochran.”

The Little Foxes (1941) – Davis does another Tallulah Bankhead impersonation in this Samuel Goldwyn production released by RKO. As Lillian Hellman’s Regina Giddens (Bankhead had the role on Broadway), the matriarch of a wealthy Southern family, Davis is the epitome of cool, calculating selfishness. Her is a marvelous villainess; one impossible not to root for. William Wyler directed this one as well, and just like in The Letter he elicited mesmerizing performances from his cast, including Herbert Marshall, Teresa Wright, Carl Benton Reid, Dan Duryea, Patricia Collinge, and Charles Dingle.

Buy tickets at the museum box office (tel. 323 857-6010) or online. Many programs sell out so try to purchase in advance. Your film ticket covers both films in a double bill, except where noted, and includes entrance to the museum galleries as well.

Further below you’ll find more information on the Bette Davis movies. And immediately below are images from the May 1 Bette Davis celebration, organized by the Academy and LACMA. 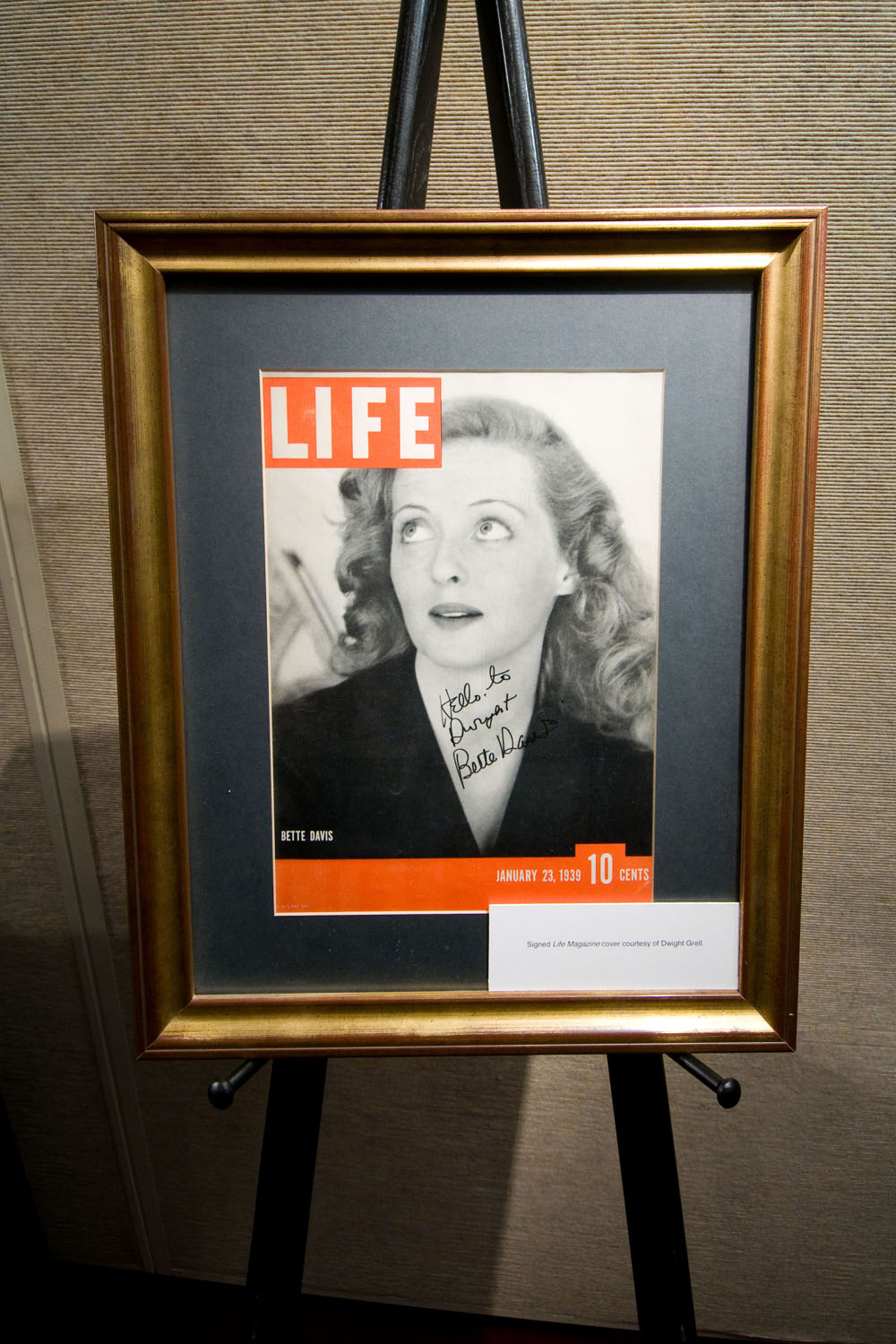 Young Bette Davis on the cover of Life magazine.

The Academy of Motion Picture Arts and Sciences, in association with the Film Department of the Los Angeles County Museum of Art, presented “A Centennial Tribute to Bette Davis” on Thursday, May 1, in the Academy’s Samuel Goldwyn Theater in Beverly Hills.

Photos: Todd Wawrychuk / ©A.M.P.A.S. (Joan Leslie at the mike and with Osborne, and Olivia de Havilland photos), Matt Petit / ©A.M.P.A.S. (all other photos) 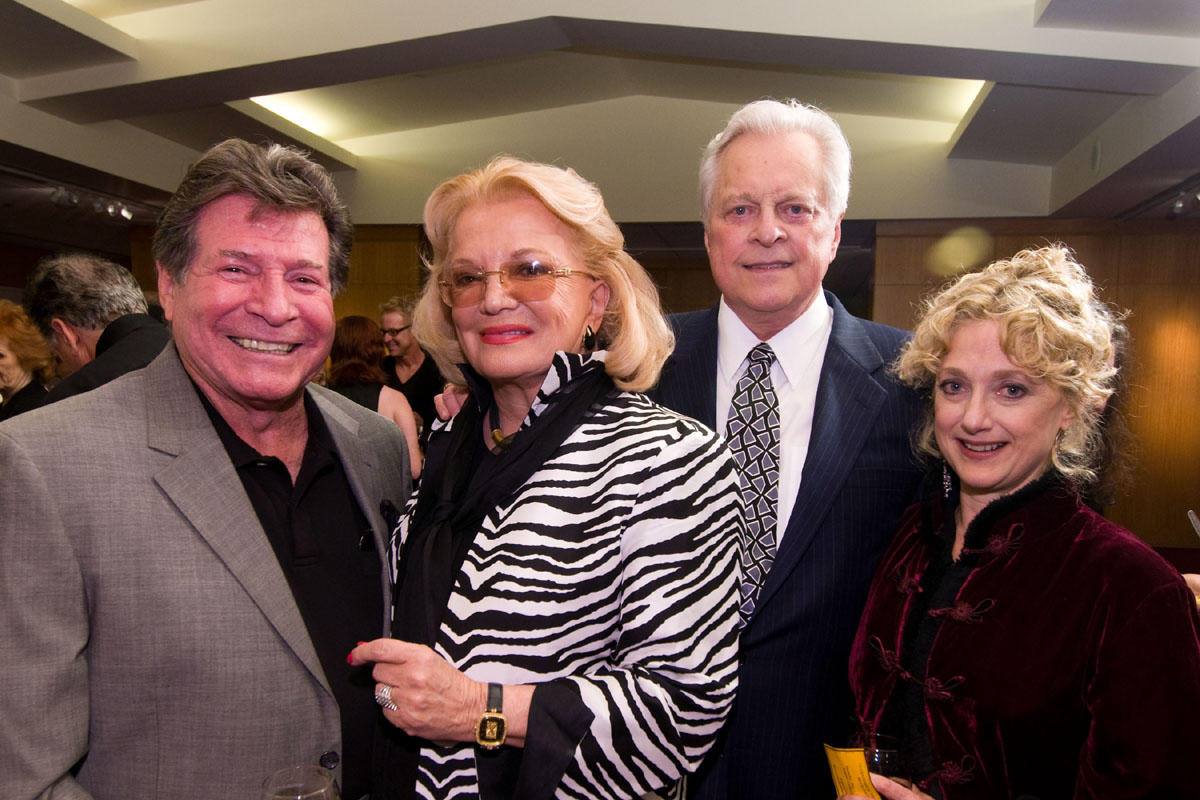 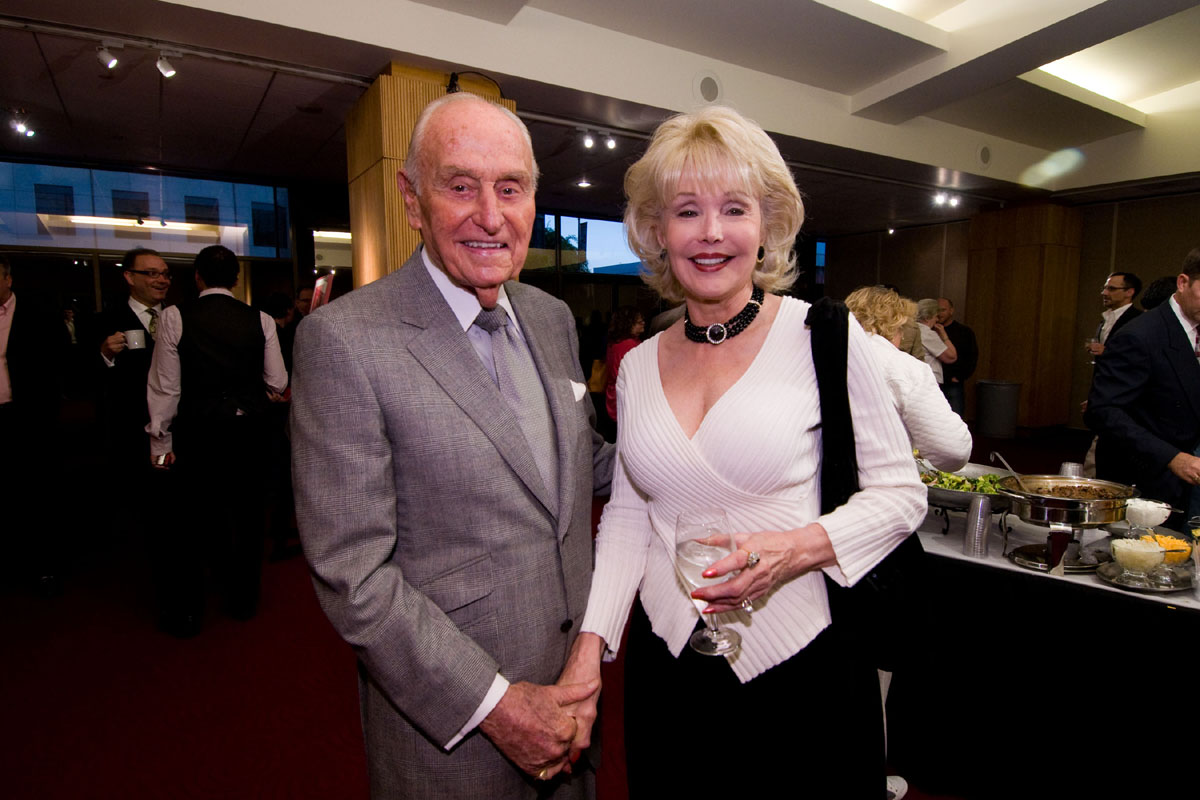 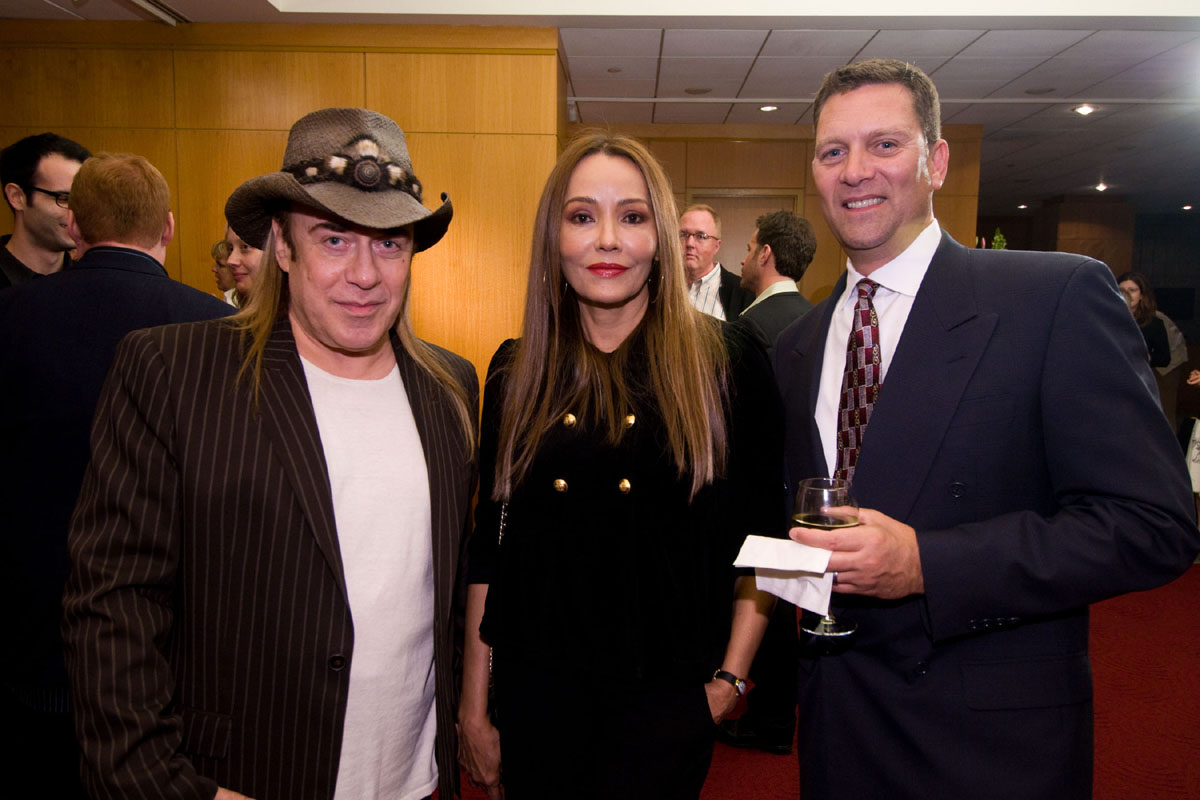 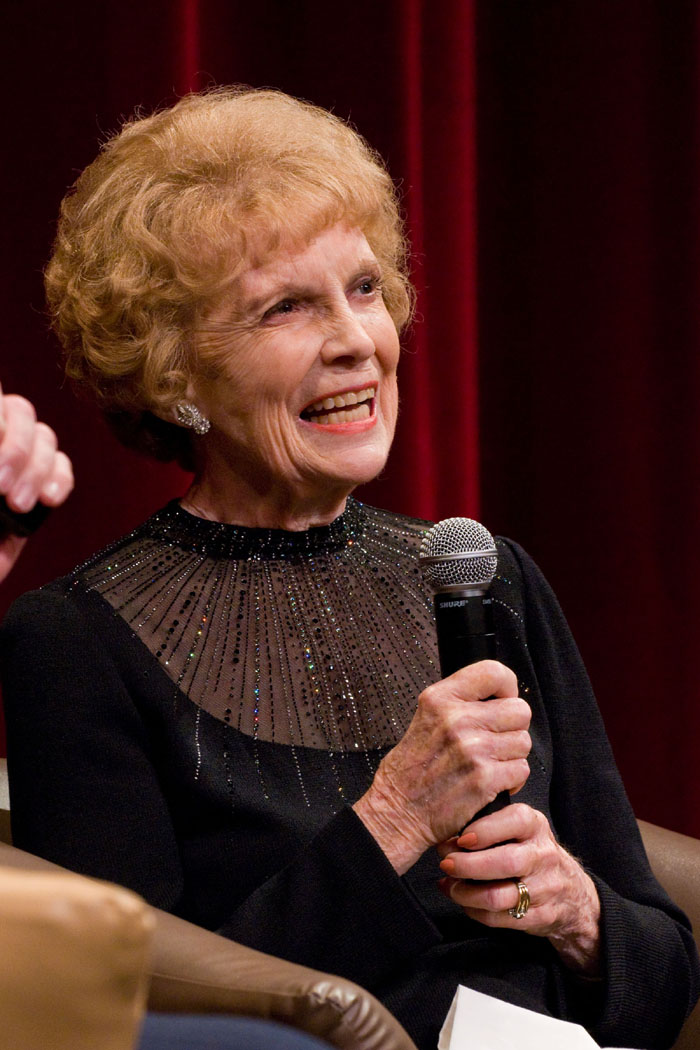 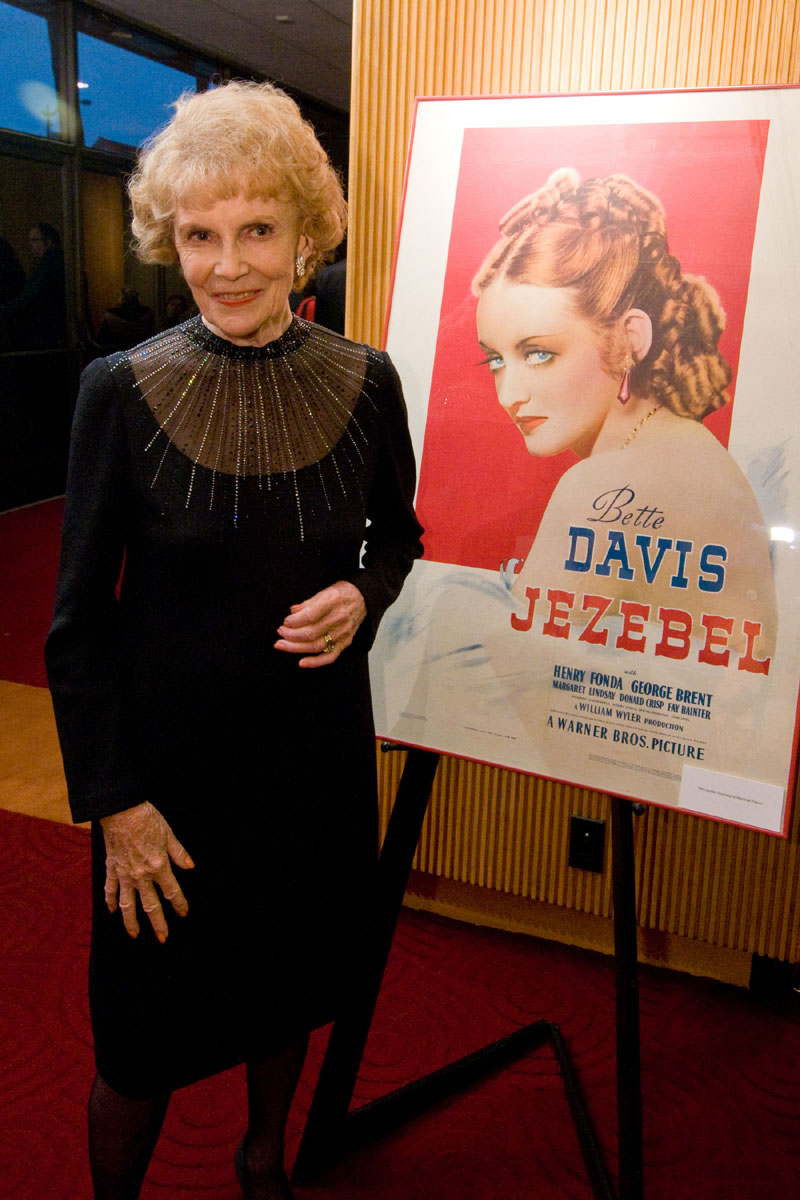 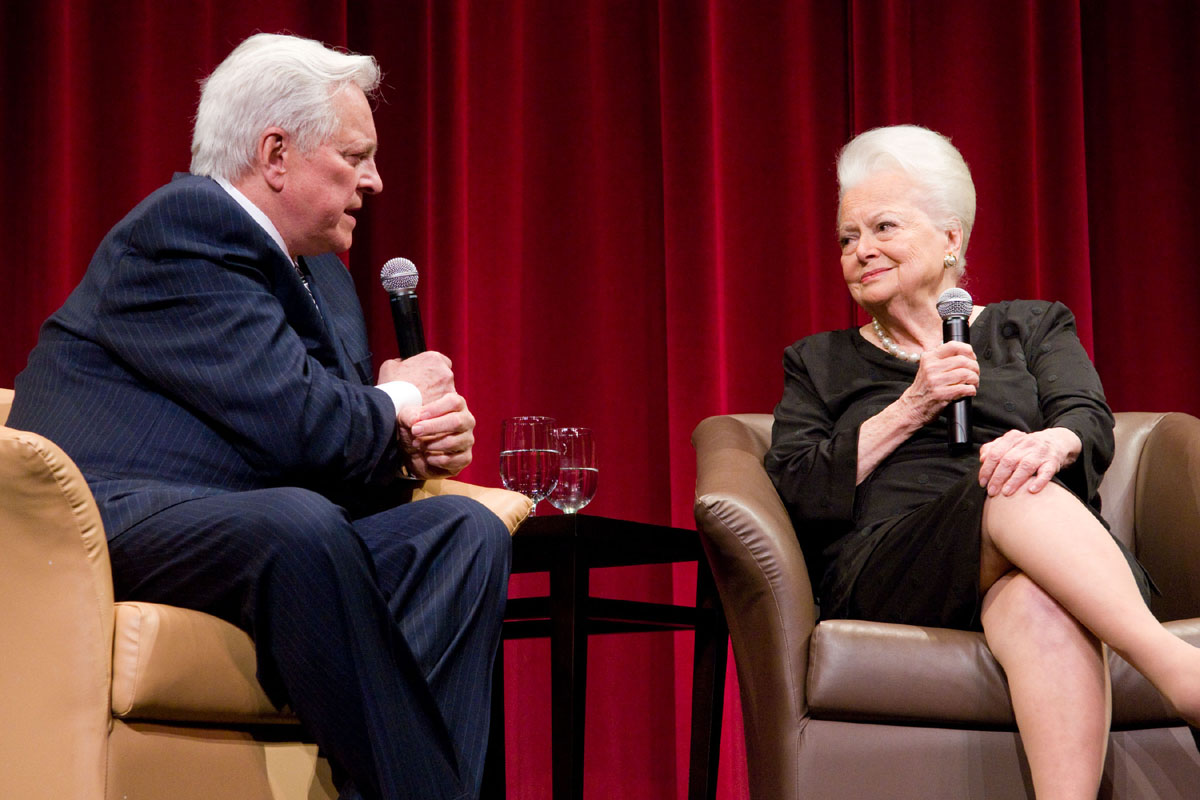 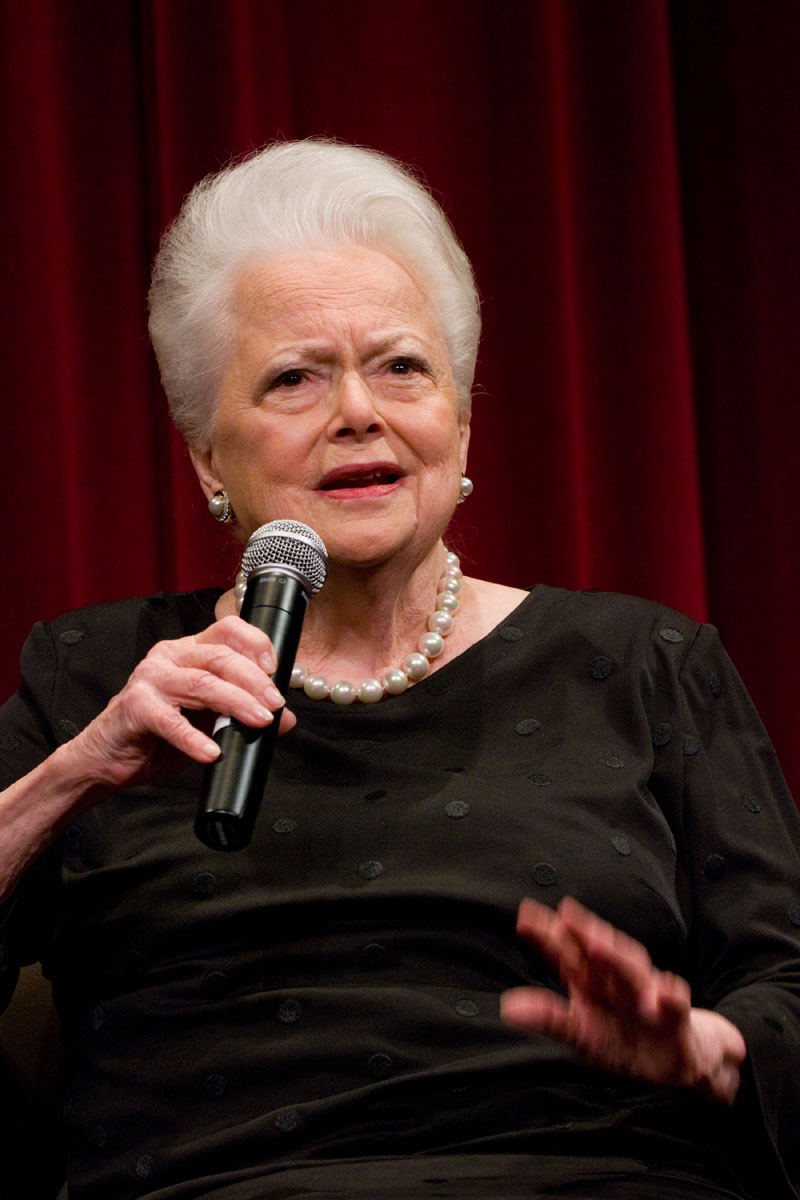 Schedule and synopses from the LACMA website. (It includes Tuesday afternoon screenings.)

A headstrong Southern belle loses the love of her life when she wears a red dress to the cotillion but is redeemed by her heroism when plague strikes the plantation. Davis is brilliant under Wyler’s meticulous direction.

Davis the rebel is an unwed mother in the Civil War South who allows spiteful cousin Hopkins to adopt her child.

A guileless fan and aspiring actress insinuates her way into the life of an aging Broadway star and her circle, unleashing fire and light. One of the wittiest films ever written and Daviss’ signature role.

In this gritty adaptation of the novel by Somerset Maugham, a slatternly waitress responds to the attentions of a wealthy student with mockery and sadism.

A flighty beauty marries a stockbroker for convenience and almost ruins both their lives.

As colonial wife Leslie Crosbie, Davis hides her raging emotions behind a façade of upper-crust gentility after shooting her lover during the opening scene.

In this fever dream of a film, Davis plays a boondocks Madame Bovary who will stop at nothing, including murder, to get out of “the dump” she shares with her henpecked doctor husband.

Considered an archetypal women’s picture and featuring twisted mother love, a sympathetic psychiatrist, a glamorous ship board romance, a noble renunciation, and – as Davis goes from frump to couture queen – the mother of all movie makeovers. “Oh Jerry, don’t let’s ask for the moon. We have the stars.”

Rival reporters try to scoop each other while covering a fire.

Lillian Hellman’s corrosive play about money, power, and mendacity in the Deep South features Davis in high shrew mode as Regina Giddens (Tallulah Bankhead played her on Broadway), who outmaneuvers brothers and husband to control the dynastic fortune.

In this realistic portrayal of a 50s taboo – divorce – a vengeful Davis takes her ex-husband to the cleaners while reflecting on the failure of her marriage.

A young fan tries to rehabilitate an alcoholic actress he’s fallen in love with.

Diagnosed with a brain tumor, wealthy horsewoman Judith Traherne turns to alcohol and promiscuity but eventually finds the inner strength to face certain death with dignity.

A dance hall “hostess” turns state’s witness when her sister is murdered by the mob. Davis demanded realistic make-up for the scene in which she is badly beaten in this quintessential Warner crime picture, based on the life of gangster Lucky Luciano.

At a particularly low point, ex-star Davis takes a job at the May Company on Wilshire, but learns the hard way that bad judgment and youthful clothes are the real impediments to the comeback dreams of an aging actress.

As the harridan wife of a Bronx taxi driver struggling to buy his own cab, Davis loses it when she tells her recently engaged daughter: “You’re going to have a big wedding whether you like it or not, and if you don’t like it you don’t have to come.” Get out those seat belts.

A revolutionary leaders fights against Emperor Maximilian of Mexico.

What happened to Baby Jane is nothing compared to what happens when sister Blanche protests that Jane’s escalating acts of sadism would be impossible if Blanche weren’t imprisoned in a wheelchair. In one of the most famous lines of her career, Davis callously remarks: “But ya are, Blanche! Ya are in that chair! “ Let the funny games begin.

In this creepy thriller (Hammer’s last film in black and white and one of the British studio’s best) Davis gives a virtuoso performance as a prim nanny – perfect in the eyes of everyone except Joey, her disturbed ward, recently returned from a juvenile home for murdering his sister. “I’m taking Master Joey an extra pillow…”

i could read all about olivia de havilland in website is very good honest person even view film old age…i like watch her age long time…thank you:-)

Update on Miss Joan Leslie? anybody.

To Olivia , I am 87 years old, former educator and opera singer. Your movies have been an inspiration to me all my life. The manner in which you lived your life , with dignity and class, have been a model for many young women. In today’s world , there are very few models for others to emulate. Please let us know how you are by keeping us informed. We pray you will have many more wonderful years……thank you Cathy Papas

does anyone know if Ms. Olivia de Havilland be making any public appearances again?

I feel myself so happy to watch the photos of the Hollywood legendaries. Suddenly I also saw the unforgettable great lady I was in love 65 years ago: Joan Leslie. Lady, believe me, I still admire you.

Thank you for putting these memorable photos of long-time great actors on the Web, as a tribute to the magnificent Bette Davis, an actress who always cared about her fans and gave her whole heart in every performance from youth to her older years. It was wonderful to see her son, Michael Merrill’s photo, as well, since he always honored his mother in life and after her passing.

I remember Bette Davis well! I was working on a game show called Match Maker at NBC. I was around 21 years old and knew very well that she was a legend and very intense as an actress. Bette Davis was to be on the Tonight Show with Johnny Carson that night. Ms Davis was sitting in the green room with her assistant, I waited for the assistant to leave then I took the opportunity to stand at the door. We both just stared at each other for a couple of minutes, wow she won the stare down with those Bette Davis eyes, and I left with the image that was timeless.

I’m a longtime Bette Davis fan. I’m glad to have found this website commemorating her centennial. She was born the same year as my mother, we will be celebrating her centennial in October.
I was also born the same year as Bette’s daughter B.D. Sad to say but truthfully, I am glad no mention was made of her in this article, for the pain she caused Miss Davis must have been unbearable.
Bette Davis will forever be my favorite actress of all time and I admire her greatly.
Happy Birthday, Darling.
Affectionately
Diane

I always admired Joan Leslie since my childhood 65 years ago. After having seen her resolute posture, I am still convined, she has lost anything from her charm. Believe me, I still love you unforgettable Great Lady Joan Leslie.
Dr. Azmi Guran
Prof.Eng.Emeritus (U of P)

Well, there is one rarity. “Payment On Demand”. How many people have
had the good luck to see that? It was shown only once (on the old AMC,
I believe) when I was fortunate enough to see it. This is highly
recommended. It is a mature look at divorce and its consequences.
Davis is excellent as both a young girl and a middle aged woman,
floundering after 20 years of marriage. Check it out.