Although Bette Davis isn’t exactly one my favorite actresses, in my view several of her performances rank among the greatest ever seen on film. Those range from the cool (The Little Foxes) and the calculating (The Letter) to the campy (Beyond the Forest) and the crazy (What Ever Happened to Baby Jane?). Even when she’s bad – and that happened quite often throughout her nearly 60-year career – she’s gripping. Say what you will about Davis, but apart from her very early work as an ingénue she was never dull. (See also: “Bette Davis Eyes.”)

So, I’m happy to report that the Academy of Motion Picture Arts and Sciences, in association with the Film Department of the Los Angeles County Museum of Art, will present “A Centennial Tribute to Bette Davis” on Thursday, May 1, at 8 p.m. at the Academy’s Samuel Goldwyn Theater in Beverly Hills.

The event, which will feature film clips and onstage discussions with several of Davis’ friends, colleagues, and family members, will be hosted by Robert Osborne.

Among those scheduled to take part in the tribute are Joan Leslie (the lead in two Warner Bros. all-star extravaganzas of the 1940s, Thank Your Lucky Stars and Hollywood Canteen, both featuring Davis cameos), James Woods (who has a supporting role in Davis’ 1976 TV movie The Disappearance of Aimee), Kathryn Sermak (Davis’ secretary and companion in later years), Gena Rowlands (her co-star in the 1979 TV movie Strangers: The Story of a Mother and Daughter), and Michael Merrill, Davis’ son with her All About Eve co-star Gary Merrill.

From a supporting role in the 1931 melo The Bad Sister to the title role in the 1989 campy comedy Wicked Stepmother, Bette Davis created a whole array of indelible portrayals – whether because they were awful good or just awful – in more than 100 features and TV movies. The parts varied wildly, but, with rare exceptions, those bulging eyes, those clipped, high-pitched (later garrulous) tones, and those nervous mannerisms remained a constant.

She was a mean-spirited waitress suffering from tuberculosis in Of Human Bondage. She was a bitchy, self-destructive actress in Dangerous (which boasts a great – and quite funny – car crash). She was a determined, red-dress-clad Southern belle in Jezebel. She was a spoiled heiress glamorously dying of cancer in Dark Victory. She suffered nobly (and sometimes bitterly) as the title character in The Old Maid. She was Olivia de Havilland’s bad, mad sister in In This Our Life. She was a vain woman who, stricken by disease, turns into a horrible hag in Mr. Skeffington.

She was a kind teacher at a Welsh mining town in The Corn Is Green (above). She was a witty, aging Broadway star in All About Eve. She was a desperate, aging Hollywood has-been in The Star. She was a (tough) bed-ridden invalid in Phone Call from a Stranger. She was a working-class housewife making preparations for her daughter’s marriage in The Catered Affair. She was a librarian and free-speech advocate accused of being a Communist in Storm Center.

She was Elizabeth I in both The Private Lives of Elizabeth and Essex and The Virgin Queen. She was the Empress Carlotta von Hapsburg in Juarez. She was Catherine the Great in John Paul Jones. And from the late 1930s to the late 1940s, she was the Queen of Warner Bros. – sometimes known as the fifth Warner brother.

Considering the wide range of her strong characters and her off-screen reputation as a forceful personality, no wonder that Bette Davis has been an inspiration for women (and drag queens) for decades.

Personally, I think Davis is quite ineffectual as romantic heroines (All This and Heaven Too, Now, Voyager, Winter Meeting) and in “straight” comedies (It’s Love I’m After, The Bride Came C.O.D., June Bride).

On the other hand, she was a master at sardonic humor, whether playing it straight (All About Eve) or twisted (Beyond the Forest, What Ever Happened to Baby Jane? [right], Hush… Hush, Sweet Charlotte). And no one could beat her – and few have equaled her – when it came to personifying Evil.

Her jealous murderess in The Letter, her ambitious (and murderous) matriarch in The Little Foxes, her deranged former child-star in What Ever Happened to Baby Jane? are all hateful women I love to admire.

And finally, I must add that I have a deep respect for Davis as an actress who never pandered to her audience; one who, whether as a star or a former star, never insisted on playing “nice” and “pretty.”

For her efforts, Davis received 10 Academy Award nominations, winning for two films: Dangerous (top photo, 1935) and Jezebel (bottom photo, 1938). Moreover, there was quite an uproar when her performance in the 1934 drama Of Human Bondage (along with Myrna Loy’s in The Thin Man) failed to land a best actress nomination. The outrage was such that Academy voters were allowed to bypass the official nominees to write in their own choices for that year’s winner.

From the 1938 to 1944, Davis missed being nominated only in 1943. Only Greer Garson has received as many consecutive Oscar nods. 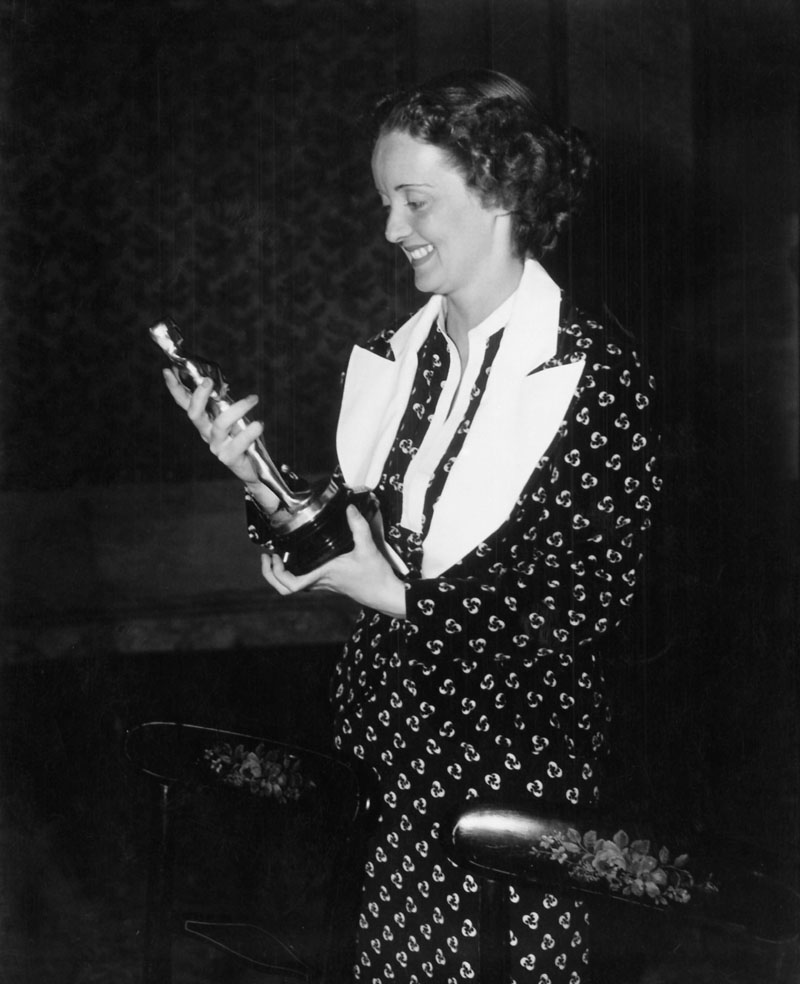 Off screen, Davis was married four times. She was – briefly – the Academy’s first female president in 1941, and during World War II, she helped to found the Hollywood Canteen. She also fought with co-stars Miriam Hopkins, Errol Flynn, and Joan Crawford, made life difficult for mogul Jack Warner, and romanced a number of eligible bachelors (and ineligible married men), including billionaire Howard Hughes and director Anatole Litvak.

In later years, she suffered a stroke, underwent cancer surgery, had a nasty falling-out with her daughter (as a result of a tell-all biography), but kept on working. My favorite Davis performance of the 1980s is her feisty elderly woman in the cable-TV movie As Summers Die.

Bette Davis finally succumbed to cancer at the age of 81 in October 1989. She was buried at the Forest Lawn Cemetery in the Hollywood Hills. Her epitaph reads, “She did it the hard way.”

Tickets for the Academy’s “A Centennial Tribute to Bette Davis” may be purchased online at www.oscars.org, in person at the Academy box office or by mail. Doors open at 7 p.m. All seating is unreserved. The Academy is located at 8949 Wilshire Boulevard in Beverly Hills. For more information, call (310) 247-3600. 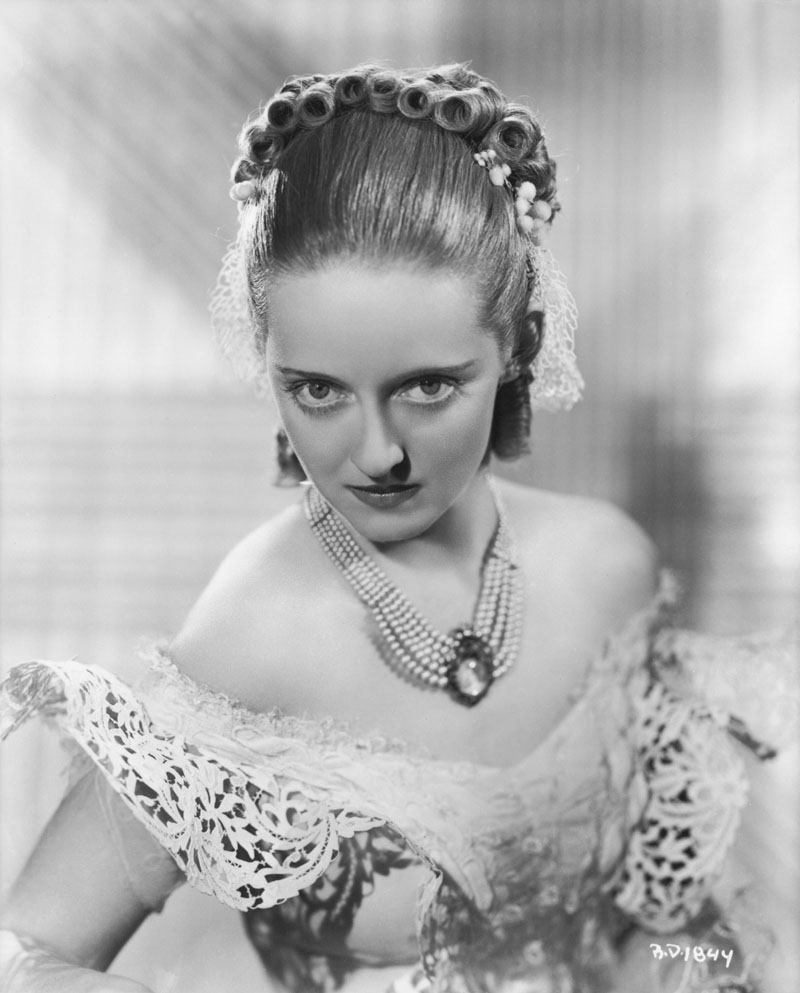 I have to agree with Lenny. What a disrespectful way to begin a tribute. Bette Davis NEVER gave a bad performance in her prime, and frankly I like her early work a great deal. She was the greatest American movie actress of all time with the possible exception of Katharine Hepburn. But even Katharine never was as popular in her prime. Bette, often referred to as Queen Bee, ruled Hollywood from 1938 til 1943 as the highest paid woman in America. In 1939 alone she had FOUR movies nominated for Acadamy Awards, Dark Victory, Juarez, The Old Maid, Elizabeth and Essex. She received Oscar nomination for Best Actress every year for 6 straight years. And in my opinion gave the single greatest performance EVER by an Actor in 1950 in All About Eve.

Oh! Bette! I’ll love you forever! You are one of my favorite actresses! You’re immortal for me as Yvonne De Carlo, Joan Fontaine and the French singer Edith Piaf!!

Why would this writer beging this article with,
‘It’s curious, I can’t say that Bette Davis is one of my favorite actresses’….? What an ODD way to preface a tribute to a woman who, in my opinion was the greatest actress of our time.

Cheers to Bette Davis. But I’m always so surprised that they have to explain who she was. I wonder if they invited B.D.