Andre Soares 10 years ago
Joan Crawford and Cliff Robertson in Autumn Leaves: Betty Barker began her professional association with Joan Crawford – for years she was Crawford’s personal assistant/secretary – around the time Robert Aldrich’s psychological drama was made. Update: Jackie Hoffman plays a version of Betty Barker – as Mamacita, Joan Crawford’s housekeeper – in the “Bette and Joan” season of the TV anthology series Feud. 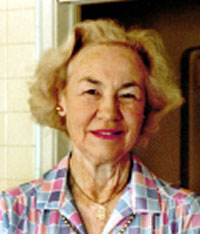 According to a paid obituary published in the Los Angeles Times, Barker grew up in the L.A. suburb of Alhambra. Following a stint in Washington, D.C., in 1944 Barker returned to Los Angeles, where she began her secretarial career at RKO. Later, she was to become a personal secretary to Howard Hughes, who gained control of the studio in 1948.

When RKO officially moved to Las Vegas in 1955, Barker opted to remain in Los Angeles. That’s when she began her professional association with Joan Crawford, whom, as per the Times obit, she had known since the early 1930s. By then a Hollywood star for nearly three decades, Crawford was still busy, appearing in movies such as Ranald MacDougall’s Queen Bee, with Barry Sullivan, and Robert Aldrich’s Autumn Leaves, opposite Cliff Robertson.

Although Crawford moved to New York after her marriage to Pepsi-Cola executive Alfred Steele in 1957, Barker continued working as her secretary from an apartment in West Hollywood. As per film historian Anthony Slide, letters written in Los Angeles would be mailed to New York City for Crawford’s signature.

Following Crawford’s death in 1977 and prior to her own retirement in the mid-1980s, Barker worked as Eva Gabor’s personal assistant. In the ensuing years, she volunteered at The Cinema Glamour Shop benefiting film-industry charities.

Regarding Christina Crawford’s sensational bestseller Mommie Dearest, Barker denied having ever seen or heard of Joan Crawford abusing her children.

And regarding Roy Newquist’s interview book Conversations with Joan, right after it came out veteran Metro Goldwyn Mayer publicist and photographer – and Joan Crawford collector – Dore Freeman told author Mark Vieira that he had called Betty Barker to ask about it. In an email sent me, Vieira quotes Barker telling Dore: “How could this Newquist person have interviewed Joan without my knowing? His name is not even in her Rolodex.”

Betty Barker was a dear friend and I will miss her. I met her in 1986, when she helped me un-
ravel the mysteries of my past…she became “Aunt” Betty. Our lives first touched forty-five years
earlier, after my birth on June 3, 1941. Betty helped take care of me while Joan Crawford was
busy on movie sets, etc. I knew nothing of my early life (until age 18 months), and Betty guided
me thru those first 5-6 months. Since 1986, I found Aunt Betty to be a warm, sharing, and lov-
ing person. She seemed truly happy that I had come back…I was the first Christopher. She gave
me my one and only baby photo which is on the cover of my book,” The Other Side of My Life.”
Betty sent me birthday and Christmas cards as well as documents and info relating to my life.
Whenever my wife, Susan, and I were in the L.A. area we took Betty to her favorite places for
breakfast or lunch. I will treasure the memories of Betty Barker…a fine and fun Lady!