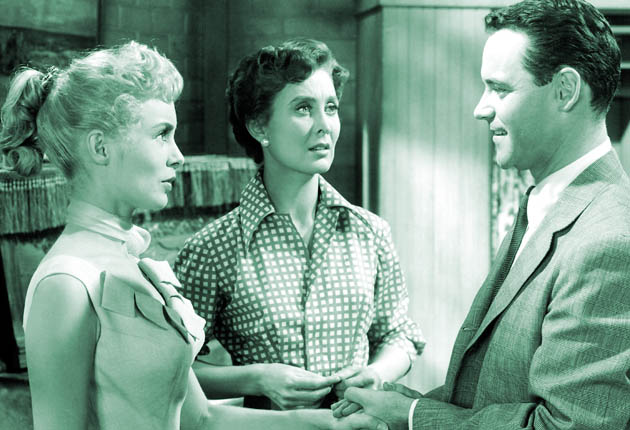 Further below are listed a handful of film personalities from around the world not found in this year’s Turner Classic Movies video homage.

Her only other important film role was as the titular “My” in Columbia’s Richard Quine-directed 1955 musical version of My Sister Eileen, with Janet Leigh and Jack Lemmon.

Sidney Lumet was given an Honorary Oscar in 2005.

Leslie Brooks ca. 1945. A supporting player and, less frequently, minor leading lady of the 1940s, pretty, blonde Leslie Brooks was featured in about a dozen Columbia releases, among them the Rita Hayworth star vehicles You Were Never Lovelier, Cover Girl, and Tonight and Every Night, in addition to, as a lead, Bs such as I Love a Bandleader and It’s Great to Be Young. Brooks’ Hollywood career came to a halt in 1948, the year she was seen in what may have been her most notable role: the titular femme fatale in Jack Bernhard’s low-budget indie noir Blonde Ice.

Like Betty Garrett, Leslie Brooks is best remembered for her movie appearances in the 1940s, when she was seen in about a dozen Columbia releases, among them William A. Seiter’s You Were Never Lovelier (1942), Charles Vidor’s Cover Girl (1944), and Victor Saville’s Tonight and Every Night (1945), all three toplining Rita Hayworth.

After she and Columbia parted ways, Brooks landed the title role in Jack Bernhard’s 1948 indie B film noir Blonde Ice, in which she played a scheming femme fatale making life difficult for Robert Paige.

David Nelson is best known for the long-running “family friendly” television series The Adventures of Ozzie & Harriet (1952–1966), in which he was featured alongside his parents (Ozzie Nelson and Harriet Nelson [a.k.a. Harriet Hilliard]) and younger brother (Ricky Nelson).

Another “TCM Remembers” talent most familiar for his television work is Peter Falk, who brought to life the unshowered, first-nameless Los Angeles homicide detective Columbo in the long-running series Columbo (off and on, 1971–2003). But unlike David Nelson, Falk did have an extensive feature film career.

A two-time Best Supporting Actor Oscar nominee (Murder, Inc., 1960; Pocketful of Miracles, 1961), he collaborated with John Cassavetes (Husbands, 1970; A Woman Under the Influence, 1974); took part in Robert Moore’s all-star murder mystery romp Murder by Death (1976); and, as a – literally – fallen angel, played a Columbo-esque version of himself in Wim Wenders’ Wings of Desire (1987).

Filmmaker and frequent Academy Awards ceremony producer Gilbert Cates directed a quartet of Oscar nominees in a couple of intriguing family dramas of the early 1970s: Melvyn Douglas and Gene Hackman in I Never Sang for My Father (1970), and Joanne Woodward and Sylvia Sidney in Summer Wishes, Winter Dreams (1973). 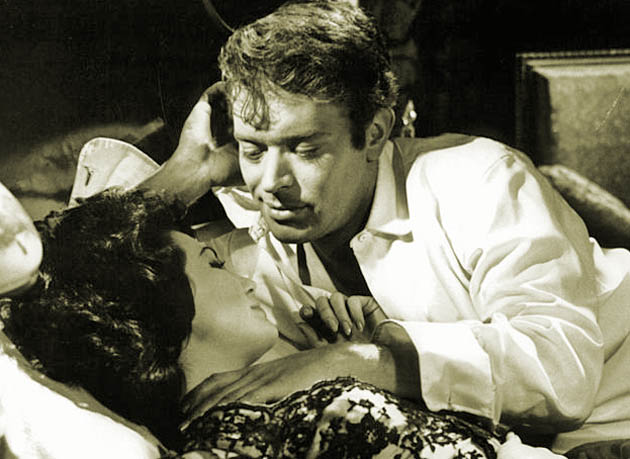 Paul Massie in The Two Faces of Dr. Jekyll with Dawn Addams. Directed by Terence Fisher, The Two Faces of Dr. Jekyll stars Canadian-born actor Paul Massie as the characters – it’s two of them, really – previously brought to life by the likes of John Barrymore, Fredric March, and Spencer Tracy. But unlike its Hollywood predecessors, this Hammer Films production was a low-budget effort that failed to do much for Massie’s movie career despite the fact that his Mr. Hyde comes across as quite the ladies’ man.

A Most Promising Newcomer BAFTA winner for his portrayal of a World War II American bomber pilot in Anthony Asquith’s Orders to Kill (1958), Paul Massie is chiefly known for the 1960 Hammer Films production The Two Faces of Dr. Jekyll / House of Fright / Jekyll’s Inferno, in which his Mr. Hyde comes across as the more alluring side of the otherwise colorless doc.

Massie also had a major role in Basil Dearden’s anti-racism, anti-xenophobia drama Sapphire, a Best Picture BAFTA nominee that created a stir upon its release in 1959.

Later on, he became a theater professor at the University of South Florida.

Truly marking the end of an era, in 2011 the world lost silent film actresses Miriam Seegar and Barbara Kent. They were the last two – relatively speaking – “well-known” surviving performers who had lead roles in English-language silent films. Both were 103 years old.

A minor leading lady at the dawn of the sound era, Indiana-born Miriam Seegar was seen in nearly 20 features between 1928 and 1932. She’s best known for a couple of British silents, G.B. Samuelson’s Valley of the Ghosts (1928) and Tim Whelan’s When Knights Were Bold (1929), in addition to, in Hollywood, Reginald Barker’s early sound comedy thriller Seven Keys to Baldpate (1929), starring Richard Dix.

Another minor leading lady during the silent-to-sound transition period, Barbara Kent was seen in more than 30 features between 1926 and 1935. Her most significant appearances were those in the John Gilbert-Greta Garbo blockbuster Flesh and the Devil (1926) and as Glenn Tryon’s romantic interest in Paul Fejos’ slice-of-life silent classic Lonesome (1928).

Curiously, TCM missed out on another silent film actress – one whose demise was announced twice, the last time in November 2010. That’s Eva von Berne (The Masks of the Devil, The Somnambulist), whose (actual) death was reported in early 2011. (Some sources claimed that von Berne had died in the 1930s.)

Perhaps it’s a mere coincidence that 2011 is also the year a silent movie – that’s Michel Hazanavicius’ The Artist – made an unexpected cultural splash. But then again, perhaps it has all been carefully scripted by someone, somewhere. 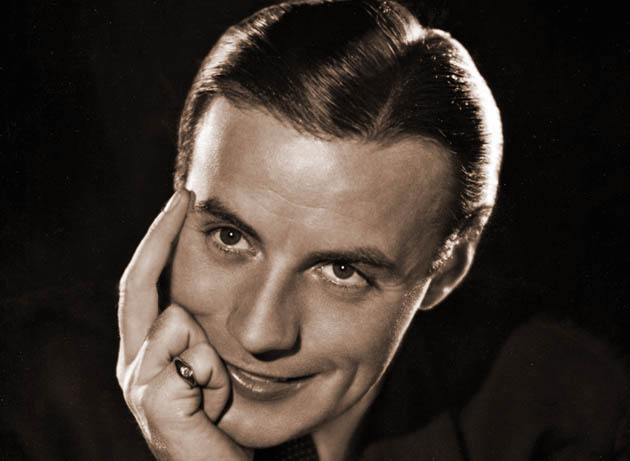 Johannes Heesters ca. 1940. Amersfoort-born Johannes Heesters moved to Germany in 1935, where he became a major star both on stage (notably as Count Danilo in a 1941 production of The Merry Widow) and in movies such as Hello Janine!, Illusion, and Karneval der Liebe. Heesters, in fact, was one of a handful of actors included on Joseph Goebbels’ Gottbegnadeten Liste (lit., “God-Gifted List”), featuring personalities deemed essential to Nazi culture. Somewhat surprisingly, Johannes Heesters’ stage and film career resumed shortly after the end of World War II. His last film appearance, at age 107, was as St. Peter (a.k.a. Mr. Peterson) in Stefan Hering’s short Ten.

The forgotten ones: Nazi era star & director of Best Picture Oscar nominee among those bypassed by ‘TCM Remembers’

Whether or not due to some careless scripting, numerous film personalities from around the world who died in 2011 were left out of the Turner Classic Movies tribute. Most of these – e.g., Johannes Heesters, Raoul Ruiz, Dulcie Gray – were non-Hollywood big-screen talent. Still, a number of Hollywoodites were neglected as well.

Admittedly, in several instances – e.g., Heesters, Denise Darcel, Nicol Williamson – they may have passed on a little too late for consideration and may pop up in next year’s “TCM Remembers.”

Whatever the reason for their absence, here are TCM’s most noteworthy forgotten ones.

Despite Heesters’ connection with top members of the Nazi regime – Adolf Hitler, for one, was a fan – he was able to resume his acting career after World War II (e.g., Die Fledermaus, 1946; Viennese Melodies, 1947; The Divorcée, 1953; Adventure in Rio, 1955). Besides, he was to remain active on the concert stage until fairly recently.

Heesters, who always claimed to have been nothing more than an apolitical entertainer, is also notable for the similarities between himself and Klaus Maria Brandauer’s ambitious, self-serving, Nazi-friendly actor in István Szabo’s Best Foreign Language Film Oscar winner Mephisto (1981).

In films since the late 1930s, Buenos Aires-born actor Alberto de Mendoza is best remembered for a number of Italian B thrillers of the 1960s and 1970s.

On the big screen, Kuala Lumpur-born Dulcie Gray was mostly seen in 1940s British melodramas such as Arthur Crabtree’s Madonna of the Seven Moons (1945), supporting Phyllis Calvert and Stewart Granger, and Crabtree’s They Were Sisters (1945), as one of the titular siblings along with Calvert and Anne Crawford.

Decades later, Gray would be seen in a recurring role in the British television series Howards’ Way (1985–1990).

Frequent West End performers in the 1940s and 1950s, Dulcie Gray and husband Michael Denison (Hungry Hill, The Importance of Being Earnest) made their Broadway debut in a 1997 production of Oscar Wilde’s An Ideal Husband.

Denison died the following year. The couple had been married since 1939.

With more than 70 features – including about a dozen documentaries – to his credit, Chilean-born, Paris-based filmmaker Raoul Ruiz a.k.a. Raúl Ruiz died at age 70 last August in the French capital.

Other prominent Raoul Ruiz titles include: