Beverly Tyler: Actress in ‘The Green Years’ & A-Bomb Film ‘The Beginning or the End’

Andre Soares 16 years ago
Beverly Tyler ca. 1945. An actress in Metro-Goldwyn-Mayer movies of the mid-1940s, pretty Beverly Tyler never became a star though she did enjoy some popularity as a decorative – and very young (she was about 18 or 19 in the image above) – leading lady and second lead in MGM releases such as The Green Years, The Beginning or the End, and My Brother Talks to Horses. After losing to newcomer Janet Leigh the female lead in The Romance of Rosy Ridge, Tyler’s MGM career came to a halt. She would later find herself cast in B movies until retiring from the screen in the late 1950s.
Contents hide
1. Beverly Tyler: Actress in several MGM movies of the mid-1940s has died
1.1. Beverly Tyler movies
1.2. Post-MGM career
1.3. Television work & marriage to TV director Jim Jordan

Beverly Tyler: Actress in several MGM movies of the mid-1940s has died

Actress Beverly Tyler, who was featured in leading lady and second lead roles at Metro-Goldwyn-Mayer in the mid-1940s and in a series of B movies throughout the 1950s, died at age 78 on Nov. 23 in Reno, Nevada.

Born as Beverly Jean Saul on July 5, 1927, in Scranton, Pennsylvania, Tyler landed an MGM contract in the early 1940s. Despite her singing skills, radio experience, good-looking face, and impressive figure, the young actress was relegated to just a few supporting and decorative leading lady roles before she and the studio parted ways.

Beverly Tyler’s two most prestigious film appearances during her brief MGM tenure came out after her Broadway debut (and only attempt) in Kurt Weill and Ira Gershwin’s 1945 flop musical The Firebrand of Florence. They were: 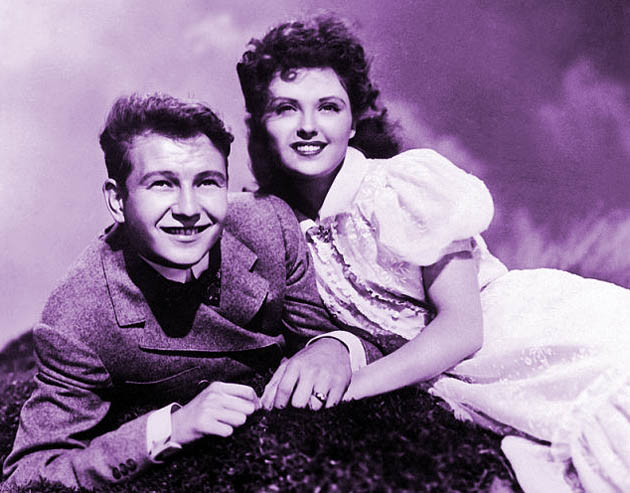 Beverly Tyler’s MGM career came to an abrupt halt at age 20, when she lost the female lead in The Romance of Rosy Ridge (1947) to newcomer Janet Leigh. According to Leigh, studio head Louis B. Mayer felt Tyler was “was a little too sophisticated to play a farm girl. They wanted a more naïve type, and they sure got her.”

Following a three-year hiatus – a reported test for the female lead in MGM’s 1949 musical That Midnight Kiss went nowhere (Kathryn Grayson was cast) – Tyler would return to the big screen in B movies at various studios. Among them:

In addition, all through the 1950s Tyler guested in a number of television shows – among them Big Town, Mike Hammer, and Climax! – before calling it quits at age 34 in 1961. That year she was seen in guest roles in a trio of TV series: Bonanza, The Andy Griffith Show, and Hazel.

The following year, she married TV director Jim Jordan (The Bob Hope Show), the son of Jim and Marion Jordan, better known as radio’s Fibber McGee & Molly. The couple would eventually settle in Reno, where Tyler would not infrequently be seen in local stage productions.

Janet Leigh quote re: Beverly Tyler and The Romance of Rosy Ridge is found in Leigh’s autobiography There Really Was a Hollywood.

List of Beverly Tyler film and TV appearances via the IMDb.

“Beverly Tyler: Actress in Metro-Goldwyn-Mayer Movies of the 1940s” last updated in January 2019.

Van Johnson Pt.2: The Boy in the Closet Next Door

I wasn’t familiar with Ms. Tyler till I just saw her in an old Andy Griffith episode. She was the most stunningly beautiful woman I had ever seen. So I looked her up to find she has passed away in 2005 at the age of 78. Somehow I thought she was still young and beautiful and waiting for me to come and rescue her from the castle she was locked up in, lol. R.I.P. beautiful lady and thanks for sharing your beauty and talent with with the world.

The reason I looked up Beverly Tyler was because I just watched “The Cimarron Kid” with Audie Murphy and Beverly Tyler. She looked familiar to me, but checking all the movie titles that she is in, I have never seen any of them. There’s no mention of this film on here. I also noticed that she quit films too early and was wondering why. I’ve also sadly noticed that way too many actresses died way too young, before reaching 50 and some didn’t even live to 40. But Beverly had a long enough life and for that makes me feel good.

I admire people who can make a “snap decision” and stick with it without alot of looking back and regretting. I don’t know for certain if BEVERLY TYLER was one of those people. But she did successfully leave Hollywood and never returned, after her marriage to Director Jim Jordan. The first and only time I recall seeing her was on the show “HAZEL”, Episode: “EVERYBODY’S THANKFUL BUT US TURKEYS”. This is one of my favorite episodes. I understand that she is in an ESTHER WILLIAMS MOVIE: “BATHING BEAUTY”, though I haven’t spotted her. And she is also in the movie: “BEST FOOT FORWARD”, which I haven’t seen either. Beverly Tyler was one of those Actresses who deserved more than what she got but was passed over for some reason. The only other Actress I can think of who successfully walked away from Hollywood was DEANNA DURBIN. The difference though was: BEVERLY took some Acting Projects, though they were in “RENO, NEVADA”. DEANNA DURBIN never returned to Acting in any way at all, to the best of my knowledge. BEVERLY was nearly a year and a half younger than ACTRESS WHITNEY BLAKE, who had third billing on “HAZEL”, who longed to be a star. She always wanted to be the leading lady but as talented as she was she too was always further down the cast list. Eventhough she was successful in her own right, having Co-Created the show: “ONE DAY AT A TIME”, she was angry when a younger Actress: “BONNIE FRANKLIN” was cast to play the LEADING LADY. Once again she was overlooked. I wish Beverly had been on Season 5 of “HAZEL” instead of LYNN BORDEN. To me it would have made more sense to bring back characters whom the audience had already seen as Relatives of HAROLD instead of trying to create characters supposedly for a younger audience. Beverly whose character name was “PHYLLIS”, and her Husband “BOB”, played by ACTOR “CHARLES COOPER”, could have come back as HAROLD’S AUNT AND UNCLE with “HAZEL”, and I think that that would have sufficed. Of course by the time “HAZEL” was in its fifth season, BEVERLY TYLER had gotten married, had a baby and moved on with her life. But I can’t help but to wonder if she could have been enticed back, even if she would have been second or third in the cast?! At least no one would have been commenting that there was never a Brother of “GEORGE” mentioned, named “STEVE” with a wife name “BARBARA”. And “PHYLLIS” would have finally learned how to cook by the end of the season/show.

In The Green Years I was sure someone was singing for Ms. Tyler. Now that I realize it was her own voice, I’m even more surprised to realize that MGM dropped her. This was a very talented actress. Perhaps it was felt she lacked raw physical appeal, and wouldn’t make it in sophisticated adult dramas — something that Janet Leigh was able to do. At any rate, when I saw Green Years I wondered why I’d never heard of her, and I think MGM made a mistake.

I have just watched “The Green Years” and I’m sure that I never saw it as a youngster when it first played the movie theaters. As a film buff I don’t think I ever saw it listed on TV before. It was a very heart - warming film with a marvelous performance by Charles Coburn, but I was particularly captured by the beauty of Beverly Tyler. Apparently somebody dropped the ball back at MGM in the old days, or maybe she twisted somebody’s knickers, because they certainly missed out on the talent that this young woman demonstrated in that film. A very belated RIP Beverly.