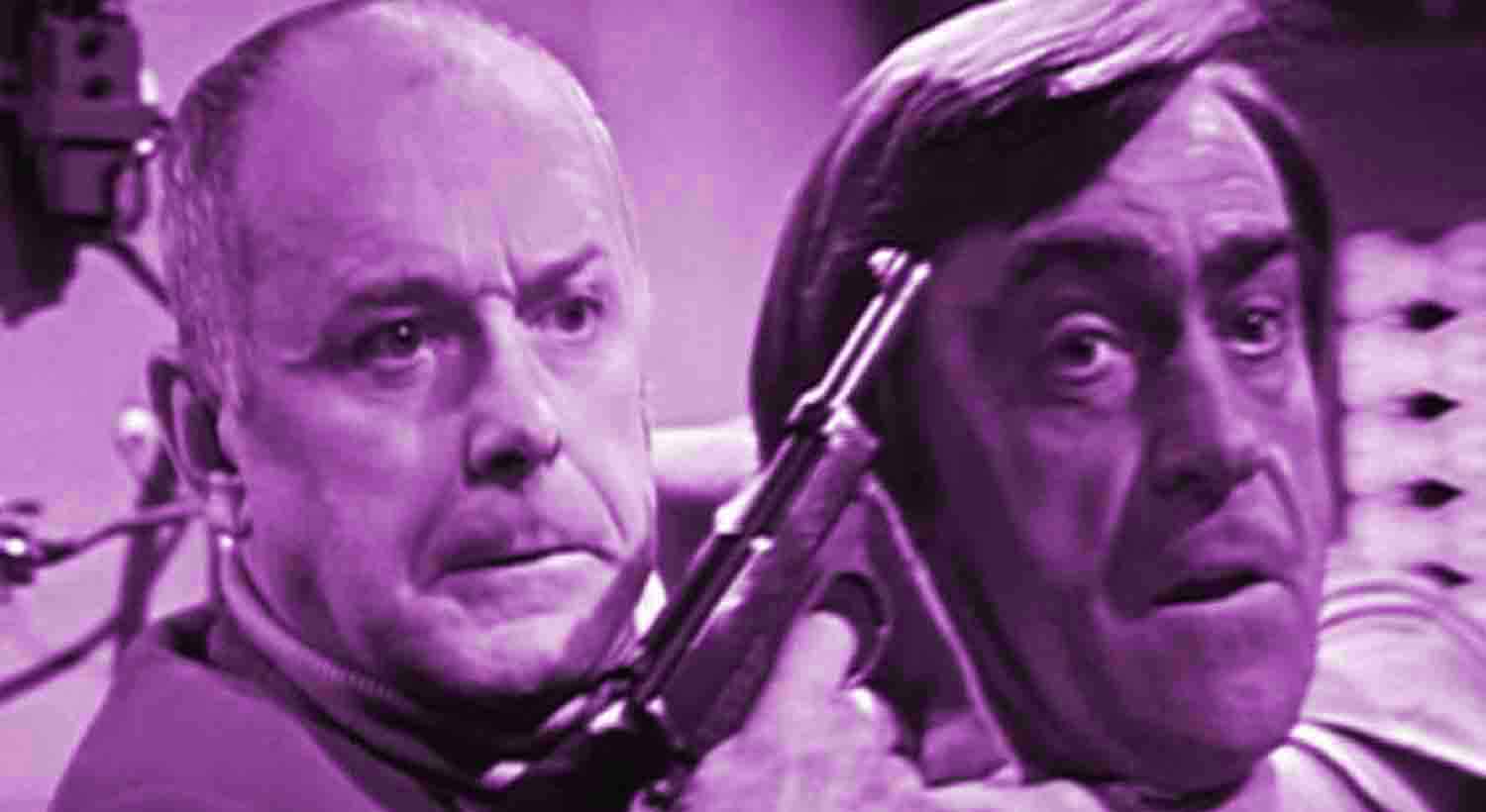 Bill Kerr in Doctor Who with Patrick Troughton.
Contents hide
1. Doctor Who actor & Peter Weir collaborator Bill Kerr dead at 92
1.1. Bill Kerr in Britain: From radio comedies to ‘Doctor Who’
1.2. Acting for Peter Weir: ‘Gallipoli’ and ‘The Year of Living Dangerously’

Australian actor Bill Kerr, best known internationally for a guest spot in the 1960s TV series Doctor Who, and for his supporting roles in the Peter Weir movies Gallipoli and The Year of Living Dangerously, died on August 28 (or 29, according to some sources), 2014, while watching the TV show Seinfeld at his home in Perth, West Australia. Kerr was 92.

Born William Kerr on June 10, 1922, in Capetown, South Africa, to Australian vaudevillian parents touring the country, Bill Kerr grew up in Australia, where he became a popular television, stage, and film personality. His show business career began at an early age.

“My mother took about 10 weeks off to have me, and when she returned to the stage the producers said rather than bother with a doll for the baby, why didn’t she use me, “ Kerr told The West Australian‘s arts editor Ron Banks in 1995. “So you could say my stage career began when I was only a few weeks old.” According to the BBC, Kerr was then known as “the Jackie Coogan of Australian vaudeville,” in reference to Hollywood’s most popular child star (The Kid, Oliver Twist) of the 1920s.

Bill Kerr in Britain: From radio comedies to ‘Doctor Who’

Bill Kerr also had a following in the United Kingdom, where he settled after World War II. On the big screen, his British efforts included minor roles in Leslie Norman’s thriller The Night My Number Came Up (1955), starring Michael Redgrave; Michael Anderson’s World War II drama The Dam Busters (1958), with Redgrave and Richard Todd; and Jack Lee’s comedy The Captain’s Table (1959), with John Gregson and Peggy Cummins.

On TV, Bill Kerr was perhaps most notably seen in the series Doctor Who (1967-68), as Giles Kent in “The Enemy of the World” episodes starring Patrick Troughton. According to the BBC, after being considered lost for years, a complete version of the six-part Doctor Who segment was discovered in 2013 at a Nigerian TV station. Also worth noting, on stage Kerr incarnated The Devil in the original West End production of Damn Yankees, directed by Bob Fosse.

Yet, Bill Kerr’s British popularity reached its peak on the radio thanks to the 1950s BBC radio comedy Hancock’s Half Hour, in which he played Tony Hancock’s dim-witted Australian sidekick Bill. Kerr would also work opposite fellow comedians Sidney James, Kenneth Williams, and Hattie Jacques.

Acting for Peter Weir: ‘Gallipoli’ and ‘The Year of Living Dangerously’

In Australia, Bill Kerr was featured in one of that country’s first talkies, Ken G. Hall’s The Silence of Dean Maitland (1934), playing a blind youth. Following his return to Australia in the late ’70s, he became a well-known face on television, being featured in a number of TV shows, e.g., Glenview High (1977) and Snowy (1993).

But internationally, Kerr was best known for his two movies for Peter Weir. In the World War I drama Gallipoli (1981), starring Mel Gibson and Mark Lee as two close buddies whose relationship is shattered by the stupidity of the military establishment, Kerr played Lee’s Uncle Jack – a performance that earned him a Best Supporting Actor nomination from the Australian Film Institute.

In Weir’s political drama The Year of Living Dangerously (1983), Kerr was an Australian colonel in 1960s Indonesia. Starring Gibson and Sigourney Weaver as foreigners enjoying a love affair while president Sukarno is about to be overthrown by General Suharto and his military cohorts, The Year of Living Dangerously was reportedly banned in Indonesia until 1999, the year after Suharto was forced to relinquish power.

Bill Kerr would receive a second nod from the AFI, this time as Best Actor, for John Richardson’s 1983 drama Dusty, in which he plays the owner of the titular dog/dingo mix.

According to the IMDB, Bill Kerr was last seen on the big screen in P.J. Hogan’s Peter Pan (2003), as the Fairy Guide (Jeremy Sumpter had the title role), and Mark Defriest’s family drama Southern Cross (2004). Kerr’s last television role was in Graeme Burfoot’s TV movie The Shark Net (2003).

Bill Kerr quote and the chief source for this article: The West Australian. Bill Kerr and Patrick Troughton Doctor Who image: BBC.