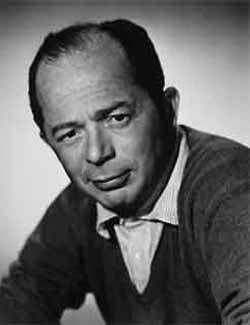 In late August, the UCLA Film & Television Archive and the Hugh M. Hefner Classic American Film Program will present “Billy Wilder’s Europe,” a seven-film series showcasing samples of the director’s movies with a European setting. The screenings will take place between Aug. 18-29 at the appropriately named Billy Wilder Theater in Westwood.

In the 1930 melodrama Show Girl in Hollywood, Blanche Sweet sings a little ditty named “There’s a Tear for Every Smile in Hollywood.” In my view, there’s a groan for every chuckle in most Billy Wilder comedies. Even though Wilder is revered as one of the greatest comedy geniuses of the 20th century, I often find his comic touch as light as a boxer’s punch and the acting and writing in his comedies as subtle as a hippopotamus stampede.

Now, that’s not to say that his comedies aren’t at all funny. Most offer a fair share of laughter – The Major and the Minor (1942), Wilder’s solo directorial debut and one of his most subversive Hollywood films, remains one of the best comedies of the 1940s. But much of Wilder’s humor falls flat due to the writer-director’s heavy hand and his penchant for vulgarity (as in low-brow – not sexual – jokes). In any case, Wilder, an ardent Ernst Lubitsch admirer, should have skipped fewer classes at the Lubitsch School of Comedy Writing & Direction.

Wilder, who was born in Central Europe – in a region that used to be part of the Austro-Hungarian Empire and that is now Polish territory (though some sources have him born in Vienna) – emigrated to the United States in the mid-1930s. Before crossing the Atlantic, he wrote or co-wrote a number of films in Germany and France, and co-directed (with Alexander Esway) one feature film in the latter country, Mauvaise graine (1934).

One sample of Wilder’s European work as a screenwriter will be screened at the UCLA series, Menschen am Sonntag / People on Sunday (1930, above), directed by two future émigrés, Robert Siodmak and Edgar G. Ulmer, who also ended up in Hollywood. This silent film depicts a day in the life of ordinary Berliners, and is considered one of the most important German films of the late silent period. I saw it once at the Netherlands Filmmuseum, but the film’s leisurely pace put me in such a contemplative mood that I spent most of the screening traveling throughout dreamland. Still, it’s a film not to be missed. Make sure to drink lots of coffee beforehand, just in case.

Menschen am Sonntag will be screened with the comic thriller Mauvaise graine / Bad Seed, which offers one of the earliest screen appearances of screen legend Danielle Darrieux – who, at 90, remains very much active.

The other screening films – most of them, unfortunately, below-par comedies – are:

Irma la Douce (1963, left), which is set in an English-speaking Paris populated by the likes of cop-on-the-beat Jack Lemmon and happy hooker Shirley MacLaine. MacLaine has some good moments – she was nominated for a best actress Oscar – but this overlong musical without songs (apart from one brief but very good number that is the film’s highlight) lacks both wit and charm.

One, Two, Three (1961) is set in Berlin during the height of the Cold War. James Cagney – in his last starring role – plays a Coca-Cola executive who wants to break into the East Berlin soft-drink market. Worse things could happen to East Berliners, such as having the executive’s daughter (Pamela Tiffin) falling for a Red ideologue (Horst Buchholz).

Some love this film; I find it one of Wilder’s worst movies as a director. It’s as if he felt that by making people talk fast and move fast, and by editing the story at breakneck speed he’d somehow make the inane gags seem funny. He doesn’t. One, Two, Three is all groans and no chuckles.

Love in the Afternoon (1957) paired Gary Cooper with Audrey Hepburn, who was young enough to be his daughter and looked young enough to be his granddaughter. (Nothing wrong with that – if only they also had more movies pairing 28-year-old guys with 60-year-old gals.) In any case, this romantic comedy set in Paris might as well have been a school play set in Boise. The Lubitsch Touch that Wilder tried to emulate is nowhere to be found, and neither Cooper nor Hepburn is in top form, thus leaving the door open for an unusually subdued Maurice Chevalier to steal the show.

“What a mistake!” frequent Lubitsch collaborator Samson Raphaelson remarked upon watching a scene at the beginning of Love in the Afternoon in which a street-cleaning truck douses with water two blissfully oblivious lovers. “Now, if I were doing that scene with Lubitsch,” Raphaelson added, “we would have first shown the truck spraying water moving toward the young lovers. But when the truck gets to them, the water shuts off. After it passes them, then the water starts up again. Now, that’s the Lubitsch Touch!” (Source: Scott Eyman’s Ernst Lubitsch: Laughter in Paradise.)

Witness for the Prosecution (1957, right) isn’t a comedy, though there are comic moments here and there. Based on an Agatha Christie play, the film does look and sound like a play – the dialogue is stilted, actors overact, the camera uses little tricks to disguise the static action. Compounding matters, the drama is quite silly, and the “twist” ending is a major letdown.

Real-life (officially) married couple Charles Laughton and Elsa Lanchester were both nominated for Oscars, and so were Wilder and the film itself. However, bird-like Una O’Connor, an unashamed scene-stealer since the early 1930s, is the film’s saving grace.

I haven’t seen The Private Life of Sherlock Holmes (1970), one of Wilder’s most troubled productions. The synopsis – “Wilder’s version of [Arthur] Conan Doyle’s detective focuses on the man’s loneliness, his friendships and enmities and hints of sexual ambiguity” – does make it sound intriguing. Robert Stephens stars.

Curiously, missing from the UCLA series is Wilder’s best “European” movie as a director: A Foreign Affair (1948). Though hardly a flawless comedy, A Foreign Affair offers two actresses – Jean Arthur and Marlene Dietrich – at their best, and even though its charms feel more than a little calculated at times, sparks of movie magic can be glimpsed every now and then.

From the Netherlands Filmmuseum
PEOPLE ON SUNDAY (MENSCHEN AM SONNTAG) (1929, Germany) Directed by Robert Siodmak and Edgar G. Ulmer

Perhaps the last important German silent film, People on Sunday sets a slice-of-life story against the dazzlingly detailed backdrop of Weimar-era Berlin. The original subtitle, “A Film Without Actors,” signals the semi-documentary intent: a city symphony orchestrated around a handful of ordinary characters enjoying a typical summer idyll on their day off.

Live musical accompaniment by Michael Mortilla. Simultaneous translation of the intertitles will be provided.

Between leaving Germany and coming to the US, Wilder stopped in France long enough to direct his first feature. The result is a comic thriller about a happy-go-lucky young man who joins a gang of auto thieves rather than get a real job.

Please note: This print is not subtitled. A detailed written synopsis will be provided.

Jack Lemmon plays the naïve gendarme who falls hard for Shirley MacLaine as the title character, a Parisian streetwalker with a heart of gold. The script is an adaptation of a French stage musical with the songs removed, but the film earned its popularity with its Gallic charm and surging widescreen cinematography.

This evening is dedicated to the memory of Jack Skirball and acknowledges the establishment of the Jack Skirball Archive Fund at UCLA.

Billy Wilder returns to divided Berlin, the setting for his 1948 A Foreign Affair, for this breakneck farce featuring a brash Coca-Cola executive (Cagney) trying to crack the East Berlin soft-drink market. Meanwhile, his boss’ daughter sneaks past Checkpoint Charlie and falls in love with an ardent young Communist.

LOVE IN THE AFTERNOON
(1957) Directed by Billy Wilder

Love in the Afternoon finds Wilder in a relaxed, full romantic mood – though still with an edgy undercurrent. A visibly aging Gary Cooper plays drolly against type as a wealthy American playboy engaged in midday trysts at his swank Parisian hotel suite. Audrey Hepburn co-stars as the cello student who gets snagged in the wily seducer’s web, and Maurice Chevalier turns in a spirited performance as Hepburn’s overprotective gumshoe father. Echoing the blithe, cosmopolitan spirit of Ernst Lubitsch’s comedies, this adroitly-executed romantic escapade shows Cooper still radiating a serene charisma at the twilight of his career (complete with sly references to Cooper’s earliest films, especially Morocco and Lubitsch’s Bluebeard’s Eighth Wife).

Shot in London and planned as a sweeping four-part, three-hour magnum opus, Wilder’s version of Conan Doyle’s detective focuses on the man’s loneliness, his friendships and enmities and hints of sexual ambiguity. Wilder was forced by his producers to trim Sherlock Holmes to two hours, but it remains a haunting film, a glimpse of aspects of Wilder’s filmmaking not often seen.

Adapted from the hit play by Agatha Christie, Witness for the Prosecution is a suspenseful courtroom melodrama infused with Wilder’s biting wit. Charles Laughton stars as a wily British barrister defending Tyrone Power in a murder trial. Marlene Dietrich plays Power’s cold-hearted wife who has turned against her husband to become the titular “witness for the prosecution.”

The Billy Wilder Theater joins an exclusive group of theaters in the U.S. capable of screening all major film and video formats-from variable speed silent films and nitrate prints to the latest digital cinema. The theater is located on the courtyard level of the Hammer Museum in the Westwood area of Los Angeles.

Jacques Rivette ‘Out 1’ at UCLA

The UCLA Film & Television Archive and the Los Angeles Film Critics Association (website) have joined forces to present the West Coast premiere of a new 16mm print of nouvelle vague filmmaker Jacques Rivette’s twelve-and-a-half-hour 1971 counterculture epic Out 1 / Out 1: Noli me tangere, described by Dennis Lim in the New York Times as “the cinephile’s holy grail.” The screening – actually, screenings – will be held on Saturday, July 28, and Sunday, July 29, at the Billy Wilder Theater in Westwood.

Set in the counter-cultural world of post-’68 Paris, Out 1 stars Jean-Pierre Léaud (an excellent child actor in François Truffaut’s Le Quatre cents coups / The 400 Blows; an unbearable adult actor in just about everything else I’ve seen him in), Juliet Berto (of Jean-Luc Godard’s Week End and La Chinoise), and Bulle Ogier (one of the guests who never quite manage to finish their meal in Luis Buñuel’s Le Charme discret de la bourgeoisie / The Discreet Charm of the Bourgeoisie), in addition to several names of 1960s French cinema, including actresses Bernadette Lafont and Françoise Fabian, and directors Eric Rohmer and Barbet Schroeder.

According to the description found on the UCLA Film Archive website, Out 1 is a “shaggy-dog tale, seemingly about two theater groups rehearsing Aeschylus, that takes off into a complex mystery loosely adapted from Balzac (with a nod to Lewis Carroll).” In Rivette’s own somewhat cryptic words, “the fiction swallows everything up and then self-destructs.” The Village Voice‘s J. Hoberman has a review here. (I’m not sure if that was Hoberman’s intention, but he makes Out 1 sound both appalling and appealing.)

Rivette, by the way, remains active. His latest film, Ne touchez pas la hache / Don’t Touch the Axe, based on Balzac’s novel La duchesse de Langeais, was up for a Golden Bear at this year’s Berlin Film Festival.

Due to its length, Out 1 will be presented in two parts, on two consecutive days. There’ll also be two brief intermissions (10 min.) and a one-hour dinner break (at approx. 5:30 p.m.) at each screening.