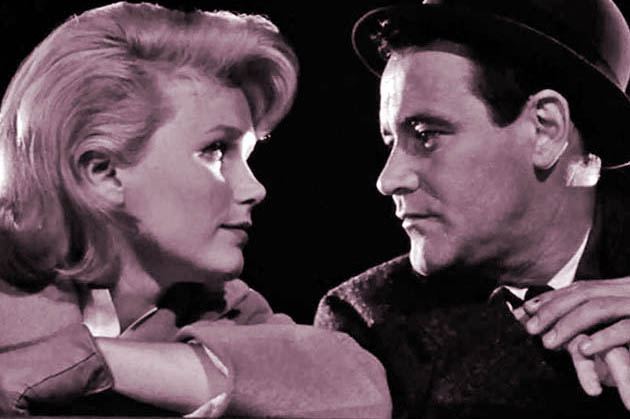 As part of its Blake Edwards tribute, Turner Classic Movies will be showing Days of Wine and Roses, starring Lee Remick and Jack Lemmon. Nearly a decade before partnering up with wife Julie Andrews in a series of (mostly) musicals and comedies, Blake Edwards joined forces with Lee Remick in a couple of 1962 efforts, Days of Wine and Roses and Experiment in Terror. Whether or not a coincidence, these are two of the director’s bleakest films. In the former, Remick plays the very pretty alcoholic wife of fellow dipsomaniac Jack Lemmon; in the latter, she plays the very pretty victim of a creepy, wheezing stalker.
Contents hide
1. Blake Edwards homage on Turner Classic Movies: From ‘Breakfast at Tiffany’s’ to ‘Victor Victoria’
1.1. Enjoyably miscast Audrey Hepburn
1.2. Lee Remick & Robert Preston film career highs: ‘Days of Wine and Roses’ & ‘Victor Victoria’
1.3. Nominationless Tony Curtis
1.4. Turner Classic Movies’ schedule (PT): Dec. 27

Apart from The Pink Panther (1963) – Peter Sellers was impressively cast in Dr. Strangelove and Being There, but his slapstick antics can be problematic – the other four movies are very much recommended. Although they’re hardly “great cinema,” each of them provides memorable opportunities for their mostly first-rate casts.

However out of her element, Best Actress Academy Award nominee Audrey Hepburn (instead of the more appropriate Marilyn Monroe) delivers an enjoyable – if more than a tad calculated – performance as a free-spirited call girl in Breakfast at Tiffany’s (1961), a disgracefully bowdlerized but still entertaining version of Truman Capote’s novel.

A couple of warnings regarding Breakfast at Tiffany’s:

Although not as well remembered as Audrey Hepburn’s Givenchy-clad Holly, also in the Breakfast at Tiffany’s cast are George Peppard, who is surprisingly excellent as Hepburn’s hunky neighbor and romantic interest (believe it or not, he gets to call her “chicken” at the film’s dramatic climax), and Patricia Neal as Peppard’s scene-stealing sugar mama, who confidently declares, “I am a very stylish girl.” She is, too.

And finally, once you hear Audrey Hepburn croon “Moon River” you’ll understand why Warner Bros. decided to have Marni Nixon dub her singing voice in George Cukor’s My Fair Lady. 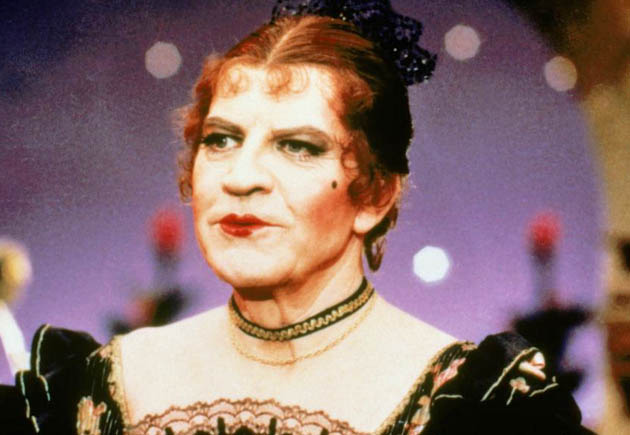 Robert Preston in Victor Victoria. Blake Edwards’ comedies tended to be (way) less than subtle, which makes the more sophisticated 1982 comedy musical Victor Victoria a near-anomaly in the filmmaker’s career. One of the movie’s highlights is the Oscar-nominated performance by veteran Robert Preston, who in the early 1950s abandoned a middling Hollywood career for the stage, unexpectedly becoming a major Broadway star (The Music Man, The Lion in Winter). In Victor Victoria, Preston plays a flamboyant gay nightclub entertainer who at one point gets to dress up as a sassy Spanish señorita.

Days of Wine and Roses (1962) gave Jack Lemmon and Lee Remick the most demanding dramatic roles of their careers up to that time. Lemmon and Remick, both of whom were Oscar nominated, play a married couple who slowly come to the realization that they have one important thing in common: alcohol addiction.

Starring Edwards’ Oscar-nominated wife Julie Andrews and James Garner, Victor Victoria (1982) offers witty lines, top-notch comic performances (supporting Oscar nominees Robert Preston and Lesley Ann Warren, plus Alex Karras), some classy musical numbers, and a much welcome subversive take on gender and sexuality – not an uncommon characteristic of the filmmaker’s movies, but one that is hard to find elsewhere in American cinema, especially in the product churned out by the Hollywood majors.

Ernst Lubitsch, for one, would have approved. On the other hand, Lubitsch would undoubtedly have left on the cutting-room floor the excruciatingly unfunny slapstick bits featuring a bumbling, Inspector Clouseau-like character.

For the record: long before Julie Andrews, the role(s) of Victor/Victoria had been tackled by Renate Müller in Reinhold Schünzel’s 1933 German original, Viktor and Viktoria; Jessie Matthews, a charming presence in Victor Saville’s otherwise uninspired, British-made First a Girl (1935); and Johanna von Koczian in Karl Anton’s 1957 German-language remake Victor and Victoria.

The least-remembered among Turner Classic Movies’ five Blake Edwards presentations, Operation Petticoat (1959) was actually a huge hit upon its release. Both Cary Grant and Tony Curtis are in top form as they sail their pink submarine through perilous, female-infested waters during World War II.

Coincidentally, that same year Curtis impersonated Grant in Billy Wilder’s classic comedy Some Like It Hot. It’s too bad he didn’t receive a Best Actor Academy Award nomination for either film.

In fact, the Academy of Motion Picture Arts and Sciences has chosen to recognize only one Tony Curtis performance – a highly dramatic one and not one of his best: as Sidney Poitier’s co-fugitive in Stanley Kramer’s well-intentioned but poorly executed 1958 “race” drama The Defiant Ones.