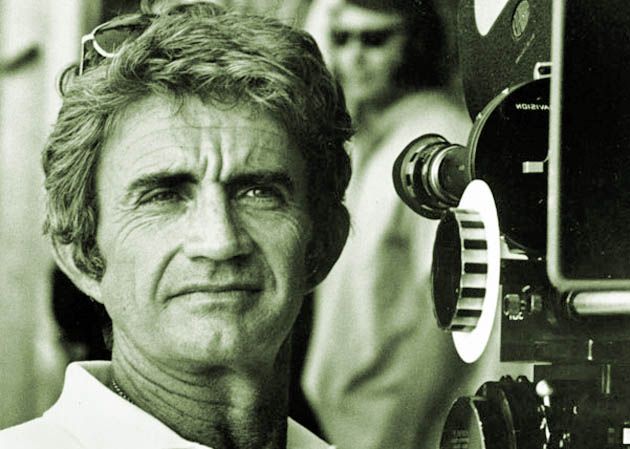 The Pink Panther and its sequels[1] are the movies most closely associated with screenwriter-director-producer Blake Edwards, whose film and television career spanned more than half a century.[2] But unless you’re a fan of Keystone Kops-style slapstick, they’re the filmmaker’s least interesting efforts.

The article below and follow-up posts offer a brief look at some of Blake Edwards’ non-Pink Panther comedies, with particular emphasis on those on which he collaborated with wife Julie Andrews.

Following two highly successful Pink Panther movies, by the mid-1960s Edwards’ comedies had become generally known for their broad, unsubtle humor. Yet on occasion he did display a more restrained touch.

Relatively early in his filmmaking career, that finer comic flair is in evidence in the entertaining, even if a tad overlong, Operation Petticoat (1959).

The movie that turned Edwards into a box office darling, this World War II-set comedy-adventure starred Cary Grant and Tony Curtis – both in top form – as two navy officers hosting a group of female army nurses (among them the recently deceased Dina Merrill) aboard a decrepit pink submarine sailing from the Philippines to Australia.

Released in December, Operation Petticoat ultimately netted Universal $9.3 million in the domestic market – thus becoming Cary Grant’s top moneymaker (not adjusted for inflation) and one of the studio’s biggest hits ever.[4]

At the other end of the scale, Blake Edwards’ heavier comic hand is in evidence in another of his comedy-adventure blockbusters, The Great Race (1965), a great-looking but overblown attempt to:

b) directly emulate silent era comedies – pie-throwing melee and all – but with a budget just about large enough (reportedly $12 million, or approx. $85 million today) to cover the production costs of all film comedies made from the dawn of the 20th century to the dawn of the sound era.

Dedicated to Stan Laurel (who had died in Feb. 1965) and Oliver Hardy (d. Aug. 1957), The Great Race toplined Some Like It Hot actors Tony Curtis[5] and Jack Lemmon, plus Natalie Wood. As a charming photojournalist/auto racer/suffragette, Wood effortlessly steals the show from her two male co-stars; Lemmon’s poorly calibrated performance, in particular, comes across as a cartoonish caricature of silent film acting. 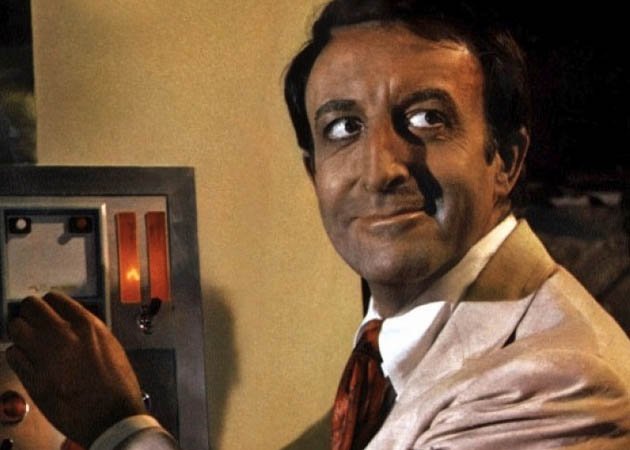 Watching Peter Sellers’ Inspector Clouseau fumble his way while in pursuit of evildoers in the Pink Panther movies can be an exercise in annoyance. A less well known but more amusing Blake Edwards-Peter Sellers collaboration is The Party (1968), a critical and box office misfire released three years after The Great Race.

A sort of precursor to Edwards’ edgier S.O.B. (1981), as both comedies offer a less-than-flattering look at film people, The Party stars Sellers as an accident-prone Indian bit player inadvertently invited to a posh Hollywood bash.

In all fairness, the film’s comic moments don’t always work, as some unnecessary Clouseau-esque slapstick gets in the way of the more pointed jabs at the lifestyles of the rich and famous in late 1960s Los Angeles. Besides, the party itself, much like its Indian guest, does overstay its welcome.

Even so, The Party features a number of humorous bits, chiefly thanks to Sellers’ politically incorrect but amiable portrayal of the clueless extra Hrundi V. Bakshi – reminiscent not only of the “foreign-accented” Inspector Clouseau but also of Jacques Tati’s M. Hulot and Sellers’ equally clueless Chance the Gardener in Hal Ashby’s political classic Being There.

Unfortunately, The Party turned out to be Blake Edwards and Peter Sellers’ only non-Pink Panther effort.

Before delving into the Blake Edwards-Julie Andrews films – their first collaboration, Darling Lili, came out in 1970 – three other notable Edwards movies of the 1960s should be mentioned, even though only one of them could be considered – to some extent – a “comedy”: Breakfast at Tiffany’s, Days of Wine and Roses, and Experiment in Terror.

Curiously, the most iconic non-Pink Panther Blake Edwards effort, the 1961 comedy-drama Breakfast at Tiffany’s, had been originally intended for somebody else: television director John Frankenheimer. With Edwards at the helm, the film became a decidedly romanticized but pleasant and, here and there, moving version of Truman Capote’s 1958 novella about Texan hick turned New York City call girl Holly Golightly (Audrey Hepburn).

Whereas in the book Holly leaves the U.S. and disappears from view, in the movie – screenplay credited to George Axelrod – she gets to sing Henry Mancini’s plaintive “Moon River,” and eventually finds both romance (in the person of all-American blond hunk George Peppard) and her missing/evicted, scene-stealing cat.

Although the title Days of Wine and Roses makes this 1962 release sound like a comedy, it’s actually a dead serious – and surprisingly effective – drama about alcohol addiction.

Academy Award nominees Jack Lemmon and Lee Remick star as a married couple whose drinking habits spiral out of control, turning Days of Wine and Roses, in the words of the New York Times’ Bosley Crowther, into “a grim, graphic, heart-rending account of the agony of these two people in the clutch of booze.”

Indeed, the year 1962 was an unusually serious one for Blake Edwards. In addition to tackling chronic alcoholism in Days of Wine and Roses, he expertly handled the (somewhat absurd) woman-in-distress – or rather, women-in-distress – suspense thriller Experiment in Terror, in which Lee Remick and sister Stefanie Powers are terrorized over the phone by an unknown asthmatic madman. Glenn Ford co-starred as an FBI officer.

Blake Edwards follow-up post to be published in the near future.

The Pink Panther with Peter Sellers. Blake Edwards’ 1963 comedy hit and its many sequels revolve around one of the most iconic film characters of the 20th century: clueless, thick-accented Inspector Clouseau – in some quarters surely deemed politically incorrect, or “insensitive,” despite the lack of brown face make-up à la Sellers’ clueless Indian guest in Edwards’ The Party.

[1] There were a total of eight big-screen Pink Panther movies co-written and directed by Blake Edwards, most of them starring Peter Sellers – even after his death in 1980. Edwards was also one of the producers of every (direct) Pink Panther sequel, from A Shot in the Dark to Curse of the Pink Panther.

Additionally, Bud Yorkin directed Inspector Clouseau (1968), with Alan Arkin in the title role. The screenplay was credited to Tom and Frank Waldan, who also helped to write Blake Edwards’ The Party that same year and, more than a decade later, The Trail of the Pink Panther.

Shawn Levy’s 2006 The Pink Panther reboot starred Steve Martin as Inspector Clouseau. It was successful enough to warrant its own sequel, the $70 million-budgeted flop The Pink Panther 2 (2009), directed by Harald Zwart.

[2] With the assistance of his stepfather, Jack McEdward*, at the time an assistant director at 20th Century Fox (Under Two Flags, Stanley and Livingstone), Blake Edwards began his Hollywood career – as an actor – in the early 1940s.

In case the IMDb info is accurate, he had bits – almost invariably as youthful military types – in about 25 films, including:

Blake Edwards’ film acting career came to a halt in 1948, with supporting roles in two B releases:

* Jack McEdward was the son of silent era director J. Gordon Edwards, whose film career reached its peak in the late 1910s and early 1920s, when he helmed opulent period pieces for the Fox Film Corporation.

Among J. Gordon Edwards’ credits, most of which are now lost, are the Theda Bara star vehicles Cleopatra, Salome, Camille, and Madame Du Barry; the 1920 version of If I Were King, starring popular leading man William Farnum; and the lavish The Queen of Sheba, with a scantily clad Betty Blythe in the title role.

[3] Blake Edwards would remain a busy television director throughout the second half of the 1950s.

TV credits during that period include a handful more Four Star Playhouse episodes; one episode of another anthology series, Jane Wyman Presents The Fireside Theatre; and numerous episodes of the hit crime series Peter Gunn (1958–1959), created by Edwards and starring Craig Stevens in the title role.

From the 1960s on, Blake Edwards would mostly stay away from TV work, though he did return to the medium every now and then. That includes directing a couple of episodes of the 1992 flop sitcom Julie, starring Julie Andrews.

Operation Petticoat with Tony Curtis. One of the biggest blockbusters of the decade, Blake Edwards’ 1959 World War II comedy-adventure set onboard a pink submarine turned the filmmaker into a respectable and well-known box office name long before the likes of Steven Spielberg, Ron Howard, and Christopher Nolan.

Applying the 50 percent exhibitor/distributor rule-of-thumb split to 1959/1960, $9.3 million in domestic rentals would represent a box office gross somewhere around $18.5 million – or, adjusting for inflation, about $270 million in 2017.

Bear in mind that inflation-adjusted box office estimates are based on the National Association of Theater Owners’ “average” domestic ticket prices. As they may not accurately reflect the key source(s) of a film’s box office gross – e.g., costly first-run houses vs. cheap neighborhood theaters – they should always be taken as, at best, unverified approximations.

[5] Prior to Operation Petticoat and The Great Race, Blake Edwards and Tony Curtis had previously collaborated on two disparate 1950s releases:

Stanley Shapiro wrote The Perfect Furlough and co-wrote (with Maurice Richlin) Operation Petticoat (from a story by Joseph Stone and Paul King). Shapiro’s film credits also include the popular Doris Day comedies Pillow Talk (1959), Lover Come Back (1961), and That Touch of Mink (1962).

Below is partial cast information of director Blake Edwards’ non-Pink Panther movies mentioned in this post.

I edited Trail and Curse into one movie…SO much better than watching them both. Clouseau is the best character ever imo. Has any ONE character been funnier with such lonegvity. I would have liked to seen Begnini get one more crack at it tbh. If only to have ‘ret-conned’ his father turning bad. Never liked that part of the series BUT Roger Moore was great as Clouseau. RIP. While I still think John Ritter was the best physical comedian of all time (suck it Keaton and chaplin), the Clouseau Character is the funniest physical comedic character. I believe Sellers had stunt doubles the older he got so he himself could come in maybe Keaton and Chaplin maybe…

Stunt double or not though - the part in 5 where he’s using the gymnastic equipment and he falls down the stairs is one of the funniest scenes in any movie ever. Edwards really was hit or miss as a director but the panther films are still funny to this day. May Steve Martin rot in hell for his abominations.

I haven’t seen part 3 in a long time though to remember how bad it is but I’m sure it’s not terrible. Arkin is no Sellers but neither is begnini. Clouseau is like superman…it will be ONE guy till the world ends. reboot a million times over but Inspector Clouseau IS Peter Sellers as Chris Reeve IS Superman. Something THAT good is timeless for a reason.

I don’t think all the ‘yellow’ jokes in the panther films wouldn’t go over well nowadays…and that makes me sad. It shows why reboots don’t work. Some things are just OF their time and when you try to erase that, you deny the younger generation of learning, pf asking why - of knowing as best they can HOW things were before…or why.