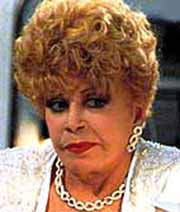 Katharine Hepburn, Barbara Stanwyck, Fred Zinnemann, Fay Wray, Henri-Georges Clouzot, T.E.B. Clarke, Yves Allégret, Dan Duryea, Paula Wessely, Burgess Meredith, John Wayne, Gene Autry, Run Run Shaw, and the list of 2007 centenarians goes on. Some are being celebrated – Katharine Hepburn has just been honored with a DVD box set; Barbara Stanwyck is the star of a University of California Los Angeles retrospective – others are, whether deservedly or not, being thoroughly ignored.

In Brazil, one who is not being ignored is the much-fêted Dercy Gonçalves, a film, stage, radio, television, and carnival star, in addition to being a gay icon, a cancer and tuberculosis survivor, a topless advocate, an environmentalist, and the owner of the most expletive-filled mouth in the Southern Hemisphere. And unlike just about every other centenary honoree (barring Run Run Shaw), Dercy – no one would refer to this Portuguese-speaking cross between Martha Raye and Mae West as “Gonçalves” – is still very much alive.

Born Dolores Gonçalves Costa on June 23, 1907, in the small town of Santa Maria Madalena in the state of Rio de Janeiro, Dercy grew up in poverty – her father was a tailor and her grandfather a gravedigger. Her mother abandoned the family early on, after she caught her husband cheating. “I was brought up by time, by the air,” she told Isto É magazine. “No one raised me. I learned from the chickens, rummaging around, whatever didn’t make me suffer I thought was good.”

She began her stage career in 1929, touring with her lover, singer Eugenio Pascoal, in small towns throughout the Brazilian southeast. Before the end of the next decade, she had become a major star of the Brazilian stage, appearing in some of the most popular revues and shows of the era, among them Passo de Ganso (Goose Step, 1942), Rei Momo na Guerra (The Carnival King at War, 1943), and Canta Brasil (Sing, Brazil, 1945).

Dercy’s style was improvisational. The plays, the characters, and the other actors had to adapt themselves to her. She was criticized for her approach, but that never stopped the actress from turning her shows into vehicles for herself.

At that time, she was also targeted because of the many “risqué” words coming out of her mouth. “I’m a portrait of this country,” she would explain. “One that is fucking nasty.”

On screen, she was first seen in Luiz de Barros’ musical comedy Samba em Berlim (1943). In the next two decades, Dercy would appear in nearly 20 productions, mostly low-brow comedies – called “chanchadas” – such as Caídos do Céu (Fallen from Heaven, 1946), in which Dercy plays a pure soul (named Rita Naftalina) from the 1890s who returns to post-World War II Rio de Janeiro in order to investigate the life of a recently deceased man stuck in heaven’s bureaucratic hell; Watson Macedo’s A Baronesa Transviada (The Baroness That Went Astray, 1957), the story of Gonçalina, a manicurist who unexpectedly finds herself both titled and rich; Macedo’s A Grande Vedete (The Big Star, 1958), a Sunset Blvd. parody about a faded music hall star who doesn’t know that the parade has long passed her by; and Euripides Ramos and Hélio Barroso’s Cala a Boca, Etelvina (1960, Shut Up, Etelvina), about a maid (chatty Etelvina) who is mistaken for her boss’ wife.

According to the IMDb, her last film appearance was in Francisco de Paula’s Oceano Atlantis in 1993, for which she was named Best Supporting Actress at the Brasília Film Festival.

In 1985, she was honored with a special theater award in a category created specifically for her: Best Stage Character.

Six years later, at the age of 83, Dercy took part in Rio’s carnival parade, baring her breasts for all to see, and a decade later she could be seen displaying her figure in lingerie ads.

Ah… According to herself, Dercy may actually be turning 102 (. She says she had five siblings, and the whole bunch was registered in the same year, 1907. She may have been born in 1905. “But then again, what difference does it make if you’re two years younger or older?”

In her case, probably none. She once remarked, “”I’ll die when I want.”