Rio de Janeiro is currently having its “Hollywood Days” as per local reports, thanks to the presence of The Twilight Saga: Breaking Dawn actors Robert Pattinson and Kristen Stewart, in addition to Paul Walker, Vin Diesel, and fellow Fast Five cast members.

On late Sunday night/early Monday morning (Nov. 7–8), Pattinson and Stewart did the Breaking Dawn scenes set in Rio’s Lapa district (this bit is not found in Stephenie Meyer’s novel). Featuring Tom Jobim’s “Girl from Ipanema” and Roberto Carlos’ “Emoções” in the background, the sequence apparently has the recently married Edward Cullen and Bella Swan-Cullen taking part in Rio’s never-ending (in Hollywood movies, that is) carnival street party.

Breaking Dawn and Fast Five are supposed to bring in $3 million in revenues to the state of Rio de Janeiro, but not everyone has been thrilled with the shoot in Lapa, known for its 18th-century aqueduct, colorful colonial buildings, lively bars and nightclubs, and just as lively transvestite sex workers.

Four portable public bathrooms were set on fire in protest against the blocking of various Lapa thoroughfares on Sunday, as residents were allowed to go home only after showing proof of residence to police.

More enterprising Lapa denizens, for their part, took a non-violent approach to the situation, charging Twilight fans up to US$150 for the privilege of watching the Breaking Dawn shoot from their apartments. (See clip below.)

Leaving the incinerated bathrooms unmentioned, RioFilme director Sérgio Sá Leitão tweeted that Sunday was “a wonderful day in Rio. Ideal for filmmaking. So far, everything [has been] going well with Fast Five and Breaking Dawn. Our efforts have paid off!”

Lapa is in the air

In the clip above, Robert Pattinson and Kristen Stewart are seen on a Lapa street in Rio, where there’s carnival partying every day and samba music is always in the air.

Bill Condon explained to the Brazilian media that the historic Lapa district – adjacent to downtown Rio’s business center – was chosen as a Breaking Dawn location because it’s a section of the city that hasn’t been seen in Hollywood movies.

Anyhow, Alfred Hitchcock, Jacques Tourneur, and Henri-Georges Clouzot would likely have made a solid thriller out of this footage.

In other Breaking Dawn in Rio news, Robert Pattinson and Kristen Stewart doubles were spotted at the Marina da Glória, where paparazzi thought they were getting shots of the actual twi-couple. The real Pattinson-Stewart combo showed up in the flesh later on.

The Marina is the setting of Edward and Bella’s boat ride to Isle Esme, where the interspecies couple will be spending their fateful & feathery honeymoon. (Check out several images here.)

Update: After leaving through the back door of Rio’s posh Copacabana Palace, Robert Pattinson and Kristen Stewart – surrounded by heavy security and screaming fans – flew by helicopter to Paraty, where they stayed at the fiercely guarded Pousada do Ouro (“Gold’s Inn”).

According to Paraty’s Tourism Office, the Isle Esme sequences were filmed in the vicinity of this colonial town south of the city of Rio – more specifically, near a waterfall in the Taquari area and in a mansion on the Saco do Mamanguá beach.

In Breaking Dawn, Isle Esme is the setting of the honeymoon of the vampire Edward Cullen and the human Bella Swan Cullen. That’s when Bella discovers she’s pregnant, a situation that results in some serious headaches (and other body pains) once the Cullens return to Washington State.

Perhaps while not dancing the samba in Lapa, Meyer was spotted going to a Mormon temple in the Jardim Botânico district in Rio’s South Zone.

As an aside, the Twilight troupe hasn’t been the only one attracting the attention of Brazilian movie fans. Terra.com reports that a Vin Diesel fan was arrested after trying to impersonate a police officer so as to approach the Fast Five star at the Copacabana Palace. 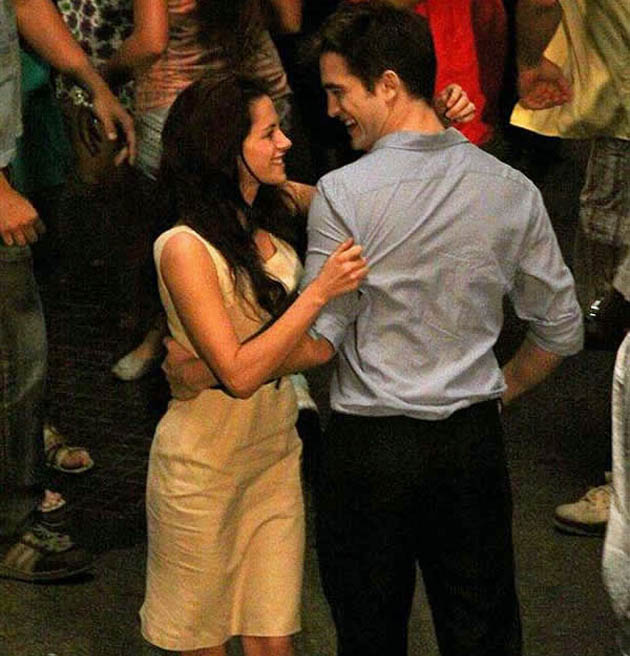 The money was to be spent on two scenes of indeterminate length featuring “postcard images” of Rio de Janeiro.

US$3 million in revenues

According to RioFilme director Sérgio Sá Leitão, the filming of Breaking Dawn in Rio will generate $3 million in revenues to the state (minus the US$500,000?), in addition to the creation of 500 jobs. (It seems that one of these gigs went to Brazilian model Raphael Martins, Robert Pattinson’s local stand-in.)

RioFilme will have at its disposal $3 million per year to invest in international projects. Leitão ads that the agency “will only invest in movies that show Rio in a very favorable light.”

In other Breaking Dawn news, director Bill Condon and producer Wyck Godfrey, along with RioFilme director Sérgio Sá Leitão, chatted with journalists about filming Edward and Bella’s honeymoon in Rio, where the presence of twidols Robert Pattinson and Kristen Stewart has caused a commotion among fans and the local media.

Godfrey declared that he and his crew felt perfectly safe – Rio is internationally infamous for its murders and muggings – thanks to the support of both state and city governments, adding that the efforts of their Brazilian production partners, Total Entertainment and Zohar Cinema, made things even easier.

The highlight of the interview took place when Condon was asked about Sylvester Stallone’s 2010 Comic-Con remarks about filming in Rio. The Oscar-winning filmmaker answered:* “The whole crew is loving their reception by the people of Rio. Forget Stallone.”

Among other things, Sylvester Stallone said the following at Comic-Con earlier this year, while reminiscing about his experiences during the filming of The Expendables in Rio de Janeiro:

You can shoot people and blow things up and they say, ‘Thank you! Take a monkey home with you!’ We couldn’t have pulled off what we did [somewhere else]. We blew up huge plots of land. It was like, Everybody bring their hot dogs. We’re having a BBQ today. We’re gonna blow up this village.

* Bill Condon took home the 1998 Best Adapted Screenplay Oscar for Gods and Monsters, starring Ian McKellen as a fictionalized version of Frankenstein and Bride of Frankenstein director James Whale. Brendan Fraser and Lynn Redgrave were also in the cast. 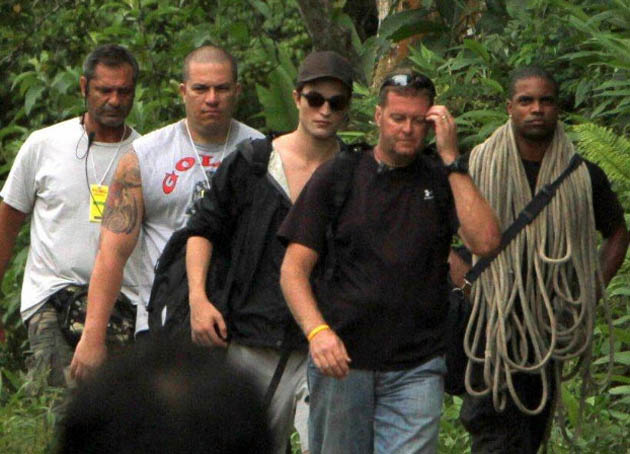 RioFilme director tweets about ‘Breaking Dawn’ controversies: Too much ado about too little

Administered by the city of Rio, RioFilme, which has just turned 18, helped to bring to Brazil the Summit Entertainment production directed by Bill Condon, and starring Robert Pattinson and Kristen Stewart.

On Twitter, Leitão answered questions and addressed concerns regarding:

Leitão asserted that RioFilme acted wisely in helping to bring both Breaking Dawn and Justin Lin’s Fast Five to Rio; that the Lapa chaos was handled “within minutes”; and that Robert Pattinson and Kristen Stewart’s safety was never at risk because the Pânico na TV people (person?) stole into an empty Isle Esme set. 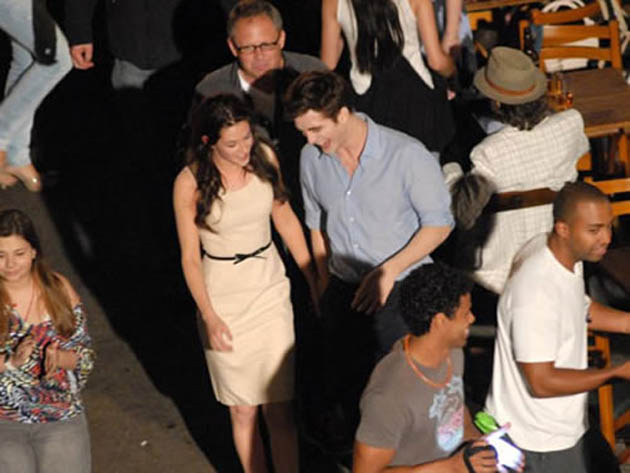 Robert Pattinson and Kristen Stewart dancing in the streets of Brazil: Rio ‘carnival’ sequence (with what looks like Bill Condon standing behind them).

Below is a translation (from the original Portuguese) of a few of Leitão’s Breaking Dawn-related tweets:

About Breaking Dawn … The City spent US$500,000 (in partnership with the state government) so as to bring in US$3 million in investments from Summit.

And to ensure a positive superpromo for the city. The shoot was news all over the world… And Rio will look really good in the movie. Win win!

Additionally… It’s a gift to the millions of Brazilian Twilight Saga fans. And the US$3.5 million were spent here (crew, equipment, etc.).

Also … In addition to the sequences found in the screenplay, we’ll have two “postcard shots” of the city in the movie. These are the accurate facts. Ok???

Another important point … Who gets RioFilme’s money? The local production companies involved in the shoot (Total and Zohar)! All of the money stays in Rio!

The alleged break-in by the Pânico [individual(s)] didn’t disrupt the Breaking Dawn shoot. [The break-in] took place when people were no longer in the house. No one even knew [about it].

There are parasites that fail to realize how important it is to attract major foreign productions to Rio. They’d rather have the public sector invest in…

…movies no one watches, that don’t lead to financial and cultural returns, that serve only to support them [the “parasites”]. They use the media to harm…

…Rio and the segment of Rio’s audiovisual productions that works hard to attract investments, create jobs, and make relevant movies!

… movies from abroad are complementary actions that benefit Rio and the city’s audiovisual industry. Enough of narrow-minded and reactionary nationalism!

Guys… When they got into the [Isle Esme] house, filming was taking place elsewhere. The other [Pânico na TV] shots were taken from a boat and a helicopter…

The house break-in didn’t disrupt filming. The helicopter did, because of the noise. But it was very quick. It wasn’t a problem. No one cared…

So, there’s no reason to worry. I didn’t use the word “parasites” in reference to you [Twilight fans?]. Everyone was happy with Breaking Dawn.

Except those who root for things to go wrong for both Rio and Brazil. And those who think that governments should invest only in their countries’ movie productions. Let’s move forward!

Note to Brazilian Twihards: Leitão suggests they bombard Summit with requests for a pre-screening of Breaking Dawn in Rio. He adds that RioFilme partner Paris Filmes will go after Summit as well.

And finally, the Isle Esme house may be demolished because it was built inside a natural reserve.

Information about the background songs during the filming of Breaking Dawn in Lapa via Ego.

Images of Bill Condon, Robert Pattinson, and Kristen Stewart during the filming of Breaking Dawn in Rio: AgNews / Capricho.

The Hunger Games vs. Twilight

I’m also diappointed at the photos from the waterfall. Was hoping to see Rob in a Speedo or at least short shorts instead of a board shorts bathing suit. Oh well, I can dream.

I prefer to think he got his hair cut just like any guy right before his wedding. Not liking the no ring thing, though. Edward would be wearing the ring. Rings for men were slowly “in fashion” in early 1900’s and besides Carlisle wears one.

I also prefer his twilight hair, but i’ll grow to like this one….

Did anyone else not like the spit curl on Rob’s forehead during the kissing scenes? Looks like his hair is shorter than it was in the first 3 pix. I prefer it as long as it was in Twilight.