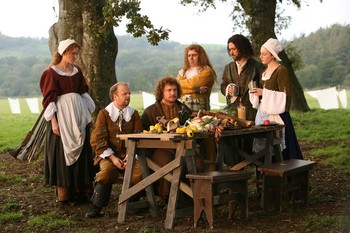 According to press reports, among the favorites to win the several Venice 2007 Lions tomorrow are:

Grain of Life / The Grain and the Mullet / La Graine et le mulet by Abdel Kechiche, the tale of a Tunisian immigrant who, at the risk of losing his job in a French fishing town, tries to stave off financial ruin by opening a floating couscous restaurant.

Hafsia Herzi in Grain of Life; newcomer Tang Wei, as the seducer in Ang Lees Lust, Caution; Cate Blanchett as one of the many Bob Dylans in Im Not There; and Kierston Wareing, as a tough single mother-cum-entrepreneur in Ken Loach’s social critique Its a Free World.

As usual, expect lots of surprises.

“This time the British are not just coming, they may even have arrived,” writes Arifa Akbar in The Independent. “A quarter of a decade after screenwriter Colin Welland issued his warning as he collected his 1982 Oscar for Chariots of Fire, there is all the evidence to suggest that a golden age of British filmmaking has arrived.”

Akbar goes on to explain that “four homegrown movies” are in the running for this year’s Golden Lion at the Venice Film Festival, adding that festival director Marco Mueller believes we’re witnessing “one of the finest epochs for British films.”

British cinema: From moribund to exuberant

Things change rather rapidly nowadays. Polar ice caps are disappearing at a much faster rate than previously thought, while whole national film industries go from moribund to alive and kicking in a matter of a few months. Just think that last May Stephen Frears was sounding the death knell for British cinema, which was all but excluded from this year’s Palme d’Or competition at the Cannes Film Festival.

But then enters Marco Mueller, who has served as president of the Venice Film Festival for the past four years, and who long ago decided that for Venice to compete with Cannes it had to become more “international.” In other words, it had to give emphasis to English-language films that would appeal to the U.S. market.

“It wasn’t quite as bad as the screening of Christopher Hampton’s Imagining Argentina, which, in 2003, had the Venice Film Festival audience laughing hysterically when it should have been crying,” writes Agnès Poirier in The Guardian. “However, the screening of Sleuth, directed by Kenneth Branagh, must have provoked embarrassment for its producers when it left both public and critics sneering. Despite what Martin Wainwright writes in The Guardian today, the feeling, at least among European film critics, was of huge disappointment if not scorn: why on earth remake a masterpiece by [Joseph L.] Mankiewicz, which already was a big screen remake of an award-winning theatre play by Anthony Shaffer?”

Well, actually there are some good reasons for remaking films, as the same story can be approached from different angles and the end result can lead to different interpretations. Think of how many Romeo and Juliet film versions have been made in the last century, from straightforward retellings of Shakespeare’s play to Robert Wise and Jerome Robbins’ Best Picture Oscar winner West Side Story — about xenophobia, racism, and balletic gangbangers in New York City – and, more recently, Eytan Fox’s The Bubble, in which a Jewish man and Palestinian man must face anti-gay bigotry in addition to the usual Jewish-Palestinian prejudices.

Another case in point: In her article, Poirier pooh-poohs Phillip Noyce’s 2001 remake of another Joseph L. Mankiewicz-directed drama, The Quiet American. I haven’t seen the 1958 original starring Audie Murphy, but I found Noyce’s remake a well-crafted, intelligent, beautifully acted, and quite timely film. Sleuth‘s Michael Caine and Brendan Fraser star.

Written by Harold Pinter, the 2007 Sleuth is supposed to be radically different from Joseph L. Mankiewicz’s 1972 original, which starred Best Actor Academy Award nominees Michael Caine and Laurence Olivier, and was written by Anthony Shaffer himself. In the 2007 remake, Caine plays the old Olivier character; Jude Law has Caine’s role in the 1972 movie.

The Venice Film Festival and the Academy Awards

“The fact that many films from Venice go on to be nominated for Oscars can’t be a coincidence,” Mueller told The Independent. “And it means the Oscars are now accepting films which are original and innovative, such as Frears’ The Queen.”

In truth, The Queen is neither original nor innovative – and that is exactly why it was recognized by the Academy – but festival presidents must be good at this sort of b.s. Some may even believe the nonsense they espouse.

In any case, as per The Independent article, films launched in Venice over the past three years have gone on to receive 51 Oscar nominations. That’s a lot of Academy-friendly originality and innovativeness for a single film festival.

Woody Allen’s Cassandra’s Dream was shown out of competition at the Venice Film Festival on Sunday. The film, which stars Colin Farrell, Ewan McGregor, and Tom Wilkinson, is described as a tragedy-cum-farce about two brothers who get in trouble as a result of their wealthy uncle’s machinations.

A few Woody Allen quotes from the festival:

“I’ve always been interested in murder and the dark side of drama,” Allen told reporters. “Murder and guilt are classic ingredients of drama … and murder is one of the tools that playwrights and filmmakers have used for centuries.”

“I’ve always worked with guilt. It’s a subject that lends itself to both sides of the coin.”

“Life itself … is a tremendously tragic event, I mean a real mess, but it has its comic moments.”

Via The [London] Guardian:

“Oscar-winning writer and director Paul Haggis, the man behind Crash, looks certain to be among the nominations again next year with In The Valley Of Elah. The film, which premiered on the Lido last night in the presence of one of its stars, Charlize Theron, is a moving drama about the repercussions of the Iraq war on military families, writes Jason Solomons.

“An outstanding Tommy Lee Jones, in a performance likely to see him also contesting for awards, plays Vietnam veteran Hank Deerfield, who goes looking for his son after he vanishes from his army base in New Mexico shortly after returning from duty in Iraq.”

Also in the cast, Susan Sarandon as Jones suffering wife.

“The hot-button topic of exploited immigrant labor forms the backdrop of Its a Free World . , the latest collaboration between helmer Ken Loach and scribe Paul Laverty (following The Wind That Shakes the Barley). Strong, pacily told London-set tale unfolds from the p.o.v. of a would-be exploiter rather than a victim, illuminating a chain of connections most people would rather ignore. Human drama remains front and center, with discussion of issues more naturally incorporated than in some of the pairs past work. Realistically lensed, convincingly cast pic contains several star-making turns and should work internationally as a quality arthouse item.”

Dave Calhoun in Time Out:

“Redacted certainly comes from an interesting place: [Brian] De Palma has decided to focus on the real story of one US Army company in the Iraqi city of Samarra, one member of which was convicted earlier this month for the rape and murder of a 14-year-old girl.

“The look of seemingly fly-on-the-wall footage can sometimes give a story a gritty immediacy surely what De Palma is seeking but it can also create an air of improvisation, playfulness and even comedy, and thats what happens too often here which isnt very helpful when youre trying to convey the real horror of a street-kidnapping or a decapitation. The greatest flaw is that the actors generally arent up to the task and so dont convince as US soldiers they play like actors playing US soldiers. Much of the film bar a compelling episode at a reconstructed US army checkpoint where suspicious cars are checked or, too often, fired upon has a rushed, unrehearsed air to it. One suspects that De Palma has mistook a lack of preparation with his actors for the path to convincing realism.”

‘I’m Not There’ gets mixed reviews

Rachel Williams in The [London] Guardian:

“Critics in Venice have been astonished by [Cate] Blanchetts performance [in Todd Haynes’s I’m Not There]. She is one of six actors playing characters meant to represent [Bob] Dylan at different points in his career, and hers is not the only unorthodox casting: a black actor in his early teens, Marcus Carl Franklin, plays the musician as he arrives as an unknown in New York at the age of 20, while 57-year-old Richard Gere represents him at the age of 32. Heath Ledger and British actors Christian Bale and Ben Whishaw take on other periods.”

Richard Geres Picasso vs. Dylan quote in the above Guardian article must be read to be believed. (And then actors complain that people dont take them seriously.)

Eugene Novikov in Film Blather wasnt all that impressed with I’m Not There, which he caught at the Telluride Film Festival:

“Haynes direction is a clusterfuck people will contend that its instance of the films form attempting to imitate its subject, but that strikes me as akin to the argument that The Thin Red Line is a great film because its long and boring, and so is war. Pulling a [Steven] Soderbergh, Haynes color-codes the segments, which range from pastoral (Woody Guthrie) to grainy black-and-white (Blanchett). The conceptual disaster hits a nadir when [Bruce] Greenwood the persistent, uncomprehending journalist from the Blanchett storylines reappears in old-man make-up as Billy the Kids nemesis. Like much of Dylans work, this made me actively angry: Im Not There seems to want to conflate skepticism and rationality with oppression and destruction. Well, heres some skepticism for you: Bob Dylan cannot sing, and never could.”